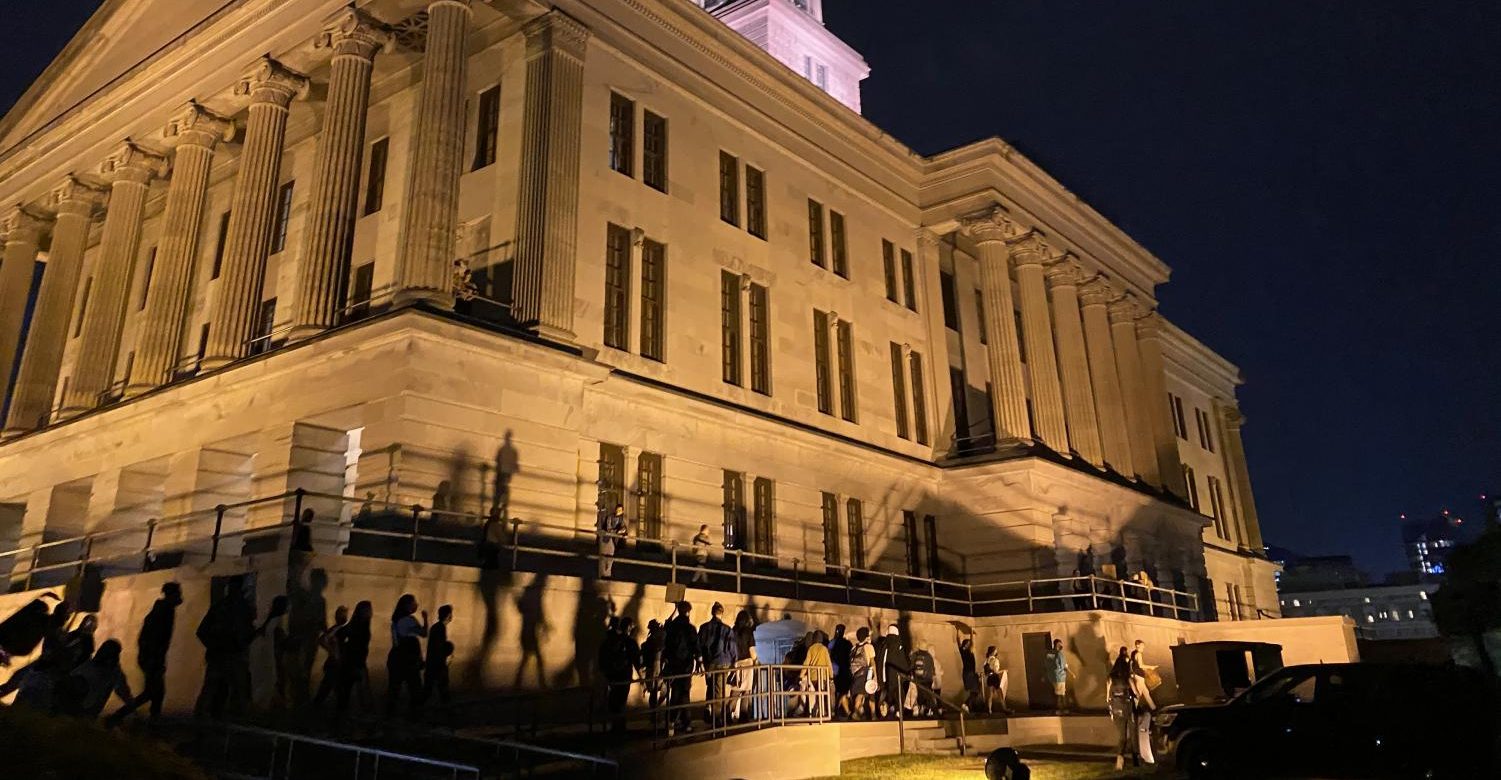 Students march with protesters down Broadway in support of Breonna Taylor

Some Vanderbilt students marched Sept. 23 in response to Kentucky Attorney General’s decision not to indict any of the three officers involved in Breonna Taylor’s killing.

Late on Sept. 23, the sounds of honky-tonk music were replaced by the sound of protesters marching against Kentucky Grand Jury’s decision in the court case following Breonna Taylor’s death.

This was the first protest in response to this decision, with a second planned for Saturday.

Organized by People’s Plaza TN, a crowd of more than 200 students and other protesters gathered at 8 p.m. CDT in East Nashville. The group walked from the East Branch library to Broadway and ultimately to the Capitol building, where protests had persisted all summer.

Police cars blocked side streets so that protesters could march with posters reading “Black Lives Matter” and “Say her name: Breonna Taylor.” Protesters brought bucket drums and bells to amplify the statements exclaimed through megaphones.

“The message of the protest was in Breonna Taylor’s honor and demonstrating that the people won’t stand for justice not being served, to Breonna Taylor, to Black women, to Black people, to all people of color,” senior Angi Axelrode, who was at the protest, said.

In support of protests occurring in Louisville, KY and all across the nation, many Vanderbilt students came out to join People’s Plaza after learning about the protest through on-campus organizations, GroupMe chats and Instagram stories.

“It was really inspiring, having the right to show up for ourselves, especially for Black women,” an anonymous Vanderbilt junior said. “It was very special for people to be out there for Breonna. Particularly because of these ideas we have about Black women not being taken care of and not being stood up for, I felt touched by the amount of people that came out.”

Protesters, including Axelrode, noted the discrepancies between those posting on social media and the individuals attending protests.

“I feel like a lot of people see these events, and there’s this huge disconnect between the amount of people that are sharing infographics or saying ‘I care about this’ and not going,” Axelrode said. “I know protests are difficult because everyone has different levels of comfortability, but there are people who are wanting a ‘non-racist’ society and then not acting on it.”

En route to Broadway, protesters stopped to listen to Black leaders speak about the purpose of the march.

“I like how People’s Plaza is a very intimate and supportive group. With the music and energy, it was really high emotions, and everyone was upset and frustrated because this really horrible thing just happened,” Axelrode said. “But I feel like they were really able to direct the energy in a very positive, collective way.”

Onlookers waved and took videos as the group marched down Broadway. Bar-goers viewed the march as music continued, with many protesters encouraging them to join in.

“There’s something about when something like this happens, and they say ‘Let’s go out to the bar and have fun,’” senior Hannah Hickman said.

Regardless of the onlookers, Hickman said that she was empowered to speak out free of censorship.

This movement was a continuation of the work that Vanderbilt students had been participating in since June, when People’s Plaza began occupying the Capitol, later leading to large-scale arrests, capitol barricades and Gov. Bill Lee’s anti-camping policies.

Protesters finished the night circling the Capitol building, chanting, singing and calling out to state troopers who looked down from the balcony above. Protesters then marched back to East Nashville and later dispersed.

As people returned home in preparation for the weekend’s continued demonstrations, many reflected on the purpose and impact of the night.

“Apart from just getting media attention, people need avenues through which they can express themselves—when the government isn’t taking them seriously, when Louisville isn’t taking Breonna’s life seriously,” an anonymous junior said. “They have frustrations; they’re healing. They want to be on the streets and shout and get that out there and let the government and people know that no matter what has happened, we are not going to be silent.”

The Vanderbilt Hustler welcomes and encourages readers to engage with content and express opinions through the comments section on our website and social media platforms. However, The Hustler reserves the right to remove comments that violate the outlined policy. Comments which contain vulgarity, hate speech, personal attacks or appear to be spam or commercial promotion will be blocked or removed by The Hustler. The comments section, both on the website and social media, is moderated by the Editor in Chief.
All The Vanderbilt Hustler Picks Reader Picks Sort: Newest
Subscribe
Login
1 Comment
Newest
Oldest Most Voted
Inline Feedbacks
View all comments
B
Bender

This is courageous. I feel so empowered right now. Not many students are brave enough to go into such large crowds of people during a pandemic. You are spreading so much more than just hope.