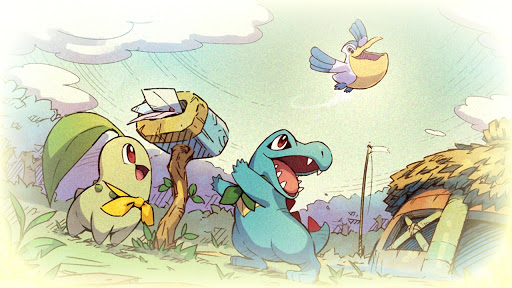 “Pokémon Mystery Dungeon: Rescue Team DX:” a cute but confusing take on the world of Pokémon

Enjoyable only in small doses, “Rescue Team DX” succeeds at being an artful dungeon crawler, but not at being a Pokémon game.

I hopped on the Pokémon bandwagon way late. I didn’t play my first mainline series game until I downloaded a virtual ROM of Emerald during the great emulator craze of 2013, when everyone—game enthusiast or not—suddenly had to have the GBA4iOS app on their phones. It was one of those rare times when the Venn diagram of nerd culture and pop culture finally merged.

Along with some close friends, I played through Emerald, Fire Red and a generation 5 ROM hack, but when the craze died down, I didn’t own a 3DS to play any future releases. While Pokémon Go in 2016 did serve as a brief respite from my hiatus, it would be six years until I’d play a main series game again, with the debut of Sword and Shield in Nov. 2019 drawing me back into the franchise definitively.

Buying a Switch had brought me back into the video game world, and Sword was just the latest incarnation of my admittedly time-consuming hobby.

Recently, the Pokémon Company decided to throw it way back to two titles in the franchise that have been gathering dust since 2006. In Jan. 2020, a Pokémon Direct revealed that a remake of Pokémon Mystery Dungeon Red and Blue Rescue Teams was in the works. Titled Rescue Team DX, the reboot would be a completely remastered, reimagined version of the fan-favorite games from the Nintendo DS and Game Boy Advance era.

Naturally, my recently rekindled love of the highest-grossing media franchise of all time meant I had to play Rescue Team DX when it was released Mar. 6. However, despite continued entertainment as I logged more than 20 hours traversing dungeons with my favorite Pokémon in tow, this game has no shortage of flaws.

When you first pop in the cartridge, you’ll notice you don’t play as a human trainer, instead taking the form of a Pokémon. You’ll be prompted with a short personality quiz that determines which starter Pokémon you’ll become (but you can override the game’s decision if you really want to be Mudkip), and then you choose your adventure companion from the remaining starters. I became a Squirtle, so I decided to stick with Generation 1 and choose an Eevee as my partner.

You’ll then wake up in an unfamiliar forest with no memory of how you got there and your soon-to-be partner standing over you. You have vague memories of your past life as a human, but your amnesia works to the advantage of your fellow Pokémon, who immediately request your help in various missions to rescue Pokémon endangered by a series of natural disasters.

If this sounds a bit too fast-paced, it is. You’re thrown headfirst into the world of Pokémon, wondering why you’re there and hoping for answers you never get. While the plot does make sense from the standpoint of logical narrative progression, its inherent absurdism takes a lot away from the ultimate story it tries to tell. The game is geared towards a younger audience, but some narrative leaps go way too far.

After many unexpected twists and turns, the story ends with a heartwarming conclusion and a message about the power of friendship, but as the credits roll you’ll be left wondering if your sense of accomplishment is justified. And if you’re anything like me, you’ll have so many questions. The post game content, while plentiful, only raises more.

On another note, the gameplay leaves much to be desired. Many people enjoy Pokémon games specifically for how repetitive gameplay can get—whether it’s challenging the Elite Four over and over to train a new team, completing the Pokédex or hunting for shinies—but the way gameplay progresses in the mainline series at least adds some variety to the familiar battle mechanics.

In this edition, each floor in a dungeon is randomly generated, meaning you’ll never go on the same adventure twice. However, on every adventure, you do exactly the same things: defeat other Pokémon, rescue those in need and search for the exit. After 3 dungeon missions, you’ll be tired of hearing about those bug Pokémon who somehow keep getting lost in the same places.

Additionally, every city and region in the mainline Pokemon games has a unique personality, so you can easily tell the difference between the settings. But in Rescue Team DX, dungeon musical themes and color schemes are recycled between different areas, so that while it’s possible to tell the difference between Howling Forest and Waterfall Pond, Mt. Blaze and Magma Cavern look and sound mostly the same.

Don’t get me wrong—Rescue Team DX is a beautifully designed game. The visuals have been appropriately updated from the original pixelated style to an adorable storybook art theme, with colors that pop and intense action sequences that get your heart pumping. The soundtrack succeeds as well, with many fans claiming to have simply sat and listened to their favorite rescue camp theme songs for at least a minute before heading out on a mission.

The game also triumphs at injecting personality into some of its main characters. Gengar is the obvious choice for the main villain, and the wise hero characters of Charizard, Alakazam and Tyranitar have well-written dialogue. Quirky dialects bring humor to characters like the sage Xatu. Even some minor characters have their cute moments in the spotlight, like when a Poochyena (a small puppy-like Pokémon) might request that you save its friend Growlithe (also a puppy).

Overall, the gorgeous art style and cute story are lost under hours of repetitive gameplay and absurd narrative choices. I did have a lot of fun playing Pokémon Mystery Dungeon: Rescue Team DX—especially because I never played the originals—but I suspect that as soon as I take the cartridge out of my Switch in favor of the latest new game, I won’t have any desire to put it back in for a while.

One Response to ““Pokémon Mystery Dungeon: Rescue Team DX:” a cute but confusing take on the world of Pokémon”