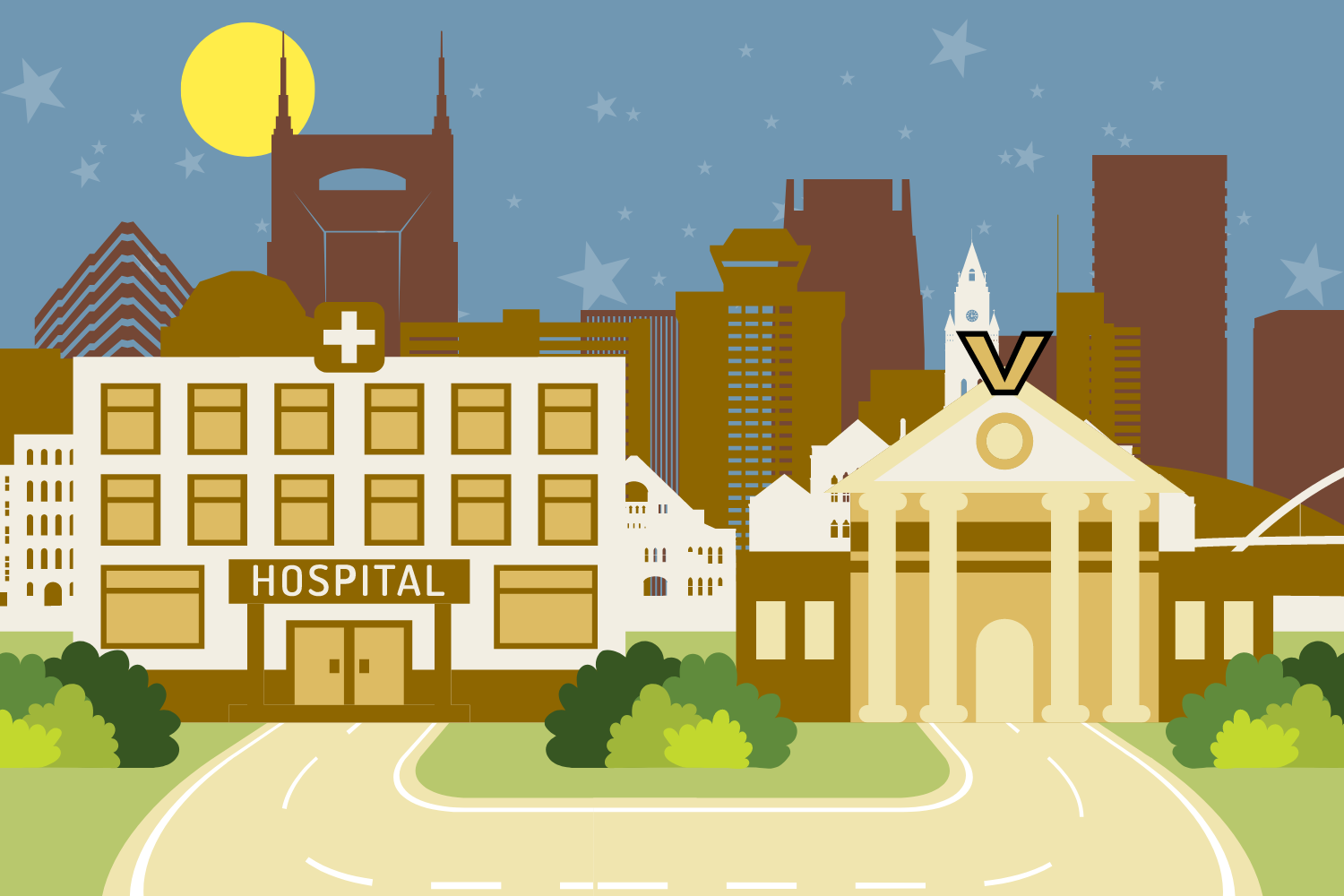 STAFF EDITORIAL: You can’t take the V out of VUMC

Vanderbilt, put your students and values above your reputation.

“We strive to be ambassadors of goodwill within our campus and beyond. We serve, uplift, and empower the members of our global neighborhood…We strive to promote a culture of civility grounded in equity, inclusivity, and respect. We hold each other’s passions and perspectives in high regard, endeavoring to live a life of personal growth and service.”

Such reads the “neighborly” and “respectful” tenets of Vanderbilt University’s Community Creed, which university administrators have made sure to plaster all over school web pages and even worked with students to develop. First-year students are required to attend an Honor Code & Community Creed signing ceremony during orientation week, affirming their diligence to abide by these policies. The values that administrators hope to impress upon students are clear: We should strive to do good in our community and work towards a more inclusive, equitable world. Shouldn’t the administrators themselves be held to these same standards?

Chancellor Daniel Diermeier and Provost and Vice Chancellor for Academic Affairs C. Cybele Raver sent a school-wide email to the Vanderbilt community three days after the accusations. Rather than offer support to Vanderbilt’s transgender community or condemn the language and actions of online commenters, Diermeier and Raver resorted to vague statements about respectful, intellectual debate and free speech.

“We understand that this media coverage may affect members of our community—prompting discussion, a need to process continuing developments, questions about faculty expression and academic freedom, and concerns about safety,” the pair write in the message.

Diermeier and Raver also heavily stress the legal distinction between the two institutions and the university’s lack of involvement in clinical decisions. However, they acknowledge that the university and VUMC share academic and community connections.

In an Oct. 9 interview with The Hustler, Diermeier elaborated on the university’s distance from VUMC’s clinical decisions.

“We are two separate nonprofit institutions, and we went into a separation agreement about six years ago,” Diermeier said. “But when it comes to clinical care, that is really the area where the medical center makes decisions as they see fit.”

At its surface, Diermeier and Raver’s message raises reasonable arguments. Freedom of speech is important in any campus environment, and it is true that Vanderbilt University is a legally distinct entity from VUMC. Diermeier and Raver, however, use these facts as an excuse to distance the university from engaging in the urgent but politically divisive issue at hand. If our leaders truly want to show support to the groups affected by these claims and follow their own Community Creed, Vanderbilt officials should be condemning the anti-trans attacks VUMC continues to sustain at the hands of extremist pundits.

Regardless of their legal separation, Vanderbilt and VUMC are connected. An attack on VUMC is an attack on the Vanderbilt name and many Vanderbilt community members, including medical students, undergraduate student workers, joint faculty and LGBTQ+ Vanderbilt students—especially those who rely on VUMC for medical treatment. Some Vanderbilt students have even reported having been harassed following the accusations. Refusing to stand against anti-trans accusations is refusing to stand up for our community and disregarding the “neighborly” and “respectful” tenets of the Community Creed. Beyond that, it is a refusal to stand up for what is right—integrity, inclusion and measured civil discourse.

University administrators have also ignored the concerns of community members who claim the school’s response to anti-trans attacks against VUMC has been insufficient. In the same interview, The Hustler asked Diermeier how he handles backlash from community members, specifically following the university’s response to the VUMC allegations.

“I haven’t heard anything that people haven’t been able to access support or anything along those lines,” Diermeier said. “I think we were very forceful in our support of LGBTQ+ students. I’m not really quite sure what else people would be looking for at this point.”

Yet, students have made it clear that they are scared and hurting. Banners, posters and chalk drawings across campus have shown that students are distressed by the extremist vitriol being spewed at them. Student organizations, research labs and safe spaces for LGBTQ+ students have canceled in-person meetings due to safety concerns. Students even directly told The Hustler that they were disappointed in Vanderbilt’s lack of support for transgender students amid Walsh’s accusations. How can Diermeier and other Vanderbilt officials ignore this harsh reality?

Nobody expects Vanderbilt, an academic institution and legally-separate organization, to make any clinical decisions for VUMC. We do, however, expect our leaders to support students and honor their moral obligation to call out harmful actions against community members—without doing so, they violate their stated goal to promote a culture of civility. The controversy surrounding the transgender clinic is not about sending emails or highlighting Vanderbilt’s commitment to free speech–it is about supporting our community. When members of our community are under threat and fear for their safety on campus, it is up to Vanderbilt and its leaders to take a stand.

Diermeier does not have to condemn any clinical decisions in order to oppose biased politicians launching a pressure campaign against VUMC to steal control from medical practitioners. Just as Vanderbilt stresses the importance of separating an academic university from medical operations, so should they stress the importance of separating extremist politicians from these operations.

“I think we were very forceful in our support of LGBTQ+ students. I’m not really quite sure what else people would be looking for at this point” Diermeier said. ”

Diermeier told The Hustler that the university is “pretty intentional” in its messages—and its intention shines. Despite Diermeier and Raver’s email reading that the university’s goal is to support its community, the university has demonstrated that it prioritizes protecting its reputation instead. As an editorial board, we have a responsibility to hold university officials accountable for neglecting the concerns and experiences of community members, especially when those concerns are brought to us. We are committed to highlighting our community’s experiences with injustice, and we expect the administration to take these stories to heart and fight for a campus culture where everyone feels safe, respected and celebrated. Time and time again—be it with the overturning of Roe v. Wade, the war in Ukraine or recent instances of gun violence—Vanderbilt’s non-committal stances have left community members feeling unheard and lost. Some students have even been forced to turn to The Hustler to prompt the university to acknowledge and address key issues. We call on the administration to commit to stances that emphatically support community members and loosen protest guidelines so students can better advocate for those who unfairly face the ramifications of societal issues if they wish to do so.

The controversy surrounding the transgender clinic is not about sending emails or highlighting Vanderbilt’s commitment to free speech–it is about supporting our community. When members of our community are under threat and fear for their safety on campus, it is up to Vanderbilt and its leaders to take a stand. ”

Some support systems for these students already exist, such as recently-increased counseling services, a student advocacy fund, a crisis fund and affinity groups. We commend the university for making these efforts. Yet, administrators’ vague messages dilute these initiatives. Few students are even aware of these resources due to how deeply they are buried in university communications—if they are mentioned at all. University administrators should make these lesser-known resources more clear in their communications.

The situation surrounding VUMC’s transgender clinic is complicated and fraught. Any individual or organization that includes themself in discourse surrounding it unfortunately jumps straight in front of a political line of fire. Vanderbilt administration’s vagueness surrounding this topic is most likely not because of indifference, but rather because of fear. Diermeier’s desire to protect the school’s reputation as an ideologically neutral institution is understandable. Instead of cowering in the shadows of conservative keyboard warriors and extremist politicians, though, it would serve him well to reexamine the Community Creed that his administration endorses. Vanderbilt administrators, like students, must be “ambassadors of goodwill”—and that provision includes supporting students. If doing so ruffles feathers, so be it. VUMC may not legally be a part of Vanderbilt University, but it is an integral part of our community. It’s time Vanderbilt’s administration acted like it.

Editor’s note: The university responded to The Hustler’s request for comment regarding the claims made in this piece against the university and its administrators. This response in full can be found below.

“Our highest priority is to affirm every member of our community and to protect and uphold the opportunity for them to thrive and succeed at Vanderbilt. When there are incidents that have direct impact for the Vanderbilt community, we support our directly affected community members and respond to those who have questions and concerns. In this case, the issue was playing out “next door.” Rhetoric and news coverage regarding Vanderbilt University Medical Center’s gender-affirming care and policies was prompting disturbing, and potentially dangerous, reaction. We knew there would be a lot of questions and concerns. We sent a message to the university community as a reminder that, as always, resources are available should you need them. We also wanted to provide context as there is continuing confusion regarding the university’s relationship with VUMC. While there are many connections between us, we are separate organizations. The university has no role in VUMC’s clinical decisions. We respected the primacy of VUMC leaders’ voices on the issue as it unfolded. It would be inappropriate and presumptuous for the university’s leaders to speak for VUMC leaders who we trust to make important clinical and policy decisions and statements.

While community messages are often the most visible part of our support, they represent only a small part of how we respond to issues of concern. We worked closely with VUMC to engage and support medical students and faculty experiencing reaction to news reports firsthand – hostile and threatening phone calls and emails to clinics and plans to demonstrate at sites providing gender-affirming care. Vanderbilt University Public Safety was heavily involved in working to protect the safety of these clinics as well as the university’s campus. Equity, Diversity and Inclusion reached out directly to the LGBTQI+ community and hosted listening sessions to hear and address concerns. We also took several steps, both physical and online, to protect the safety of students and related university events on campus. We often do not share publicly all the details of the safety and security actions we take as a safety precaution.”

The Vanderbilt Hustler welcomes and encourages readers to engage with content and express opinions through the comment sections on our website and social media platforms. The Hustler reserves the right to remove comments that contain vulgarity, hate speech, personal attacks or that appear to be spam, commercial promotion or impersonation. The comment sections are moderated by our Editor-in-Chief, Rachael Perrotta, and our Social Media Director, Chloe Postlewaite. You can reach them at [email protected] and [email protected]
All The Vanderbilt Hustler picks Reader picks Sort: Newest
Subscribe
Login
1 Comment
Newest
Oldest Most Voted
Inline Feedbacks
View all comments
A
Anonymously

Perhaps the Vanderbilt University administration realizes that 23% of the school’s operations are funded by private donors/endowments, whose opinions may or may not align with the current trend of prioritizing an extremely small percentage of the general population as well as the student body.