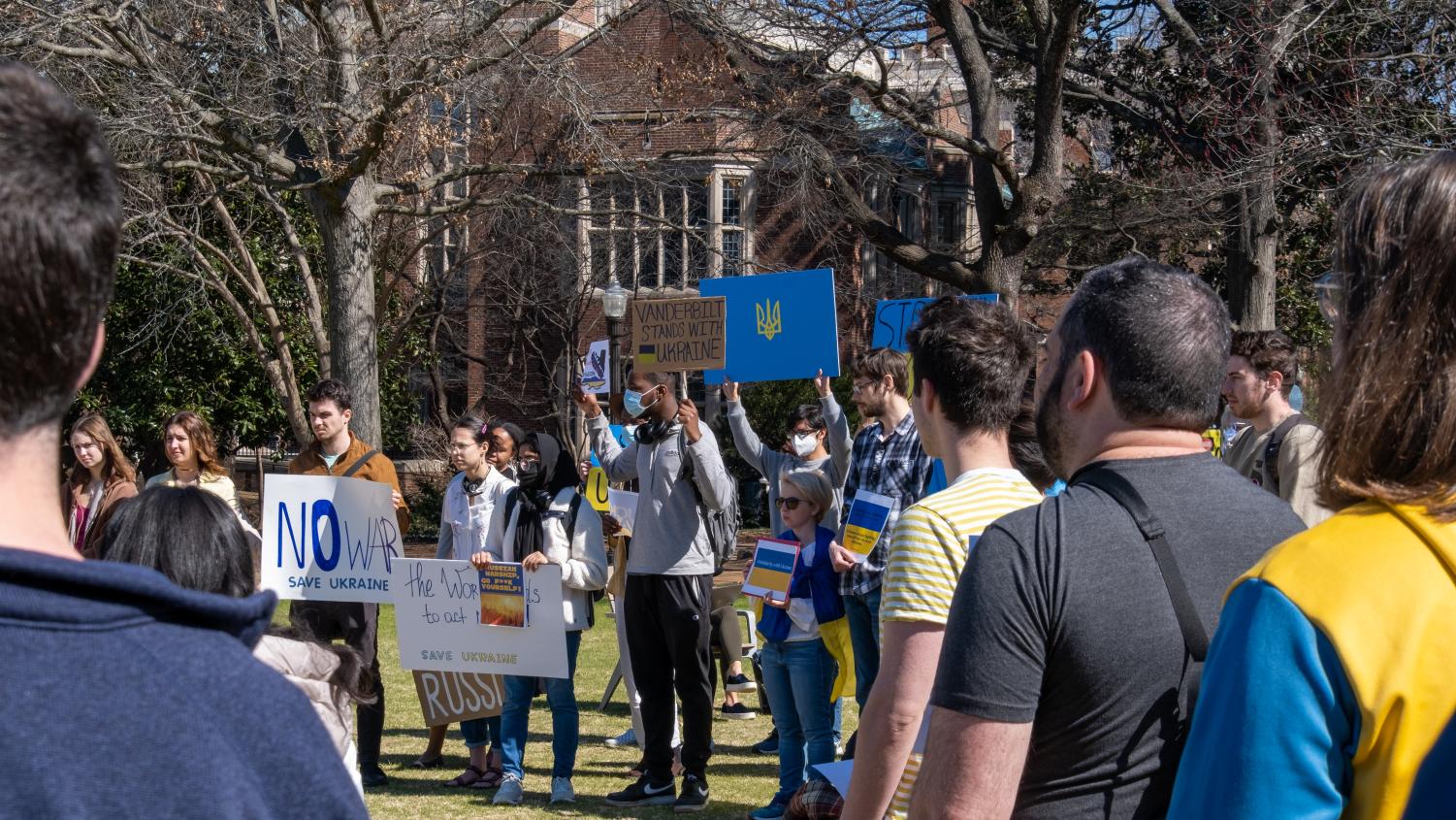 Protestors in support of Ukraine, as photographed on March 1, 2022. (Hustler Multimedia/Noah Srulovitz)

The two-day demonstrations led by Ukrainian students hoped to pressure Vanderbilt to condemn Russia’s continued attacks and raise awareness about the war.

Dozens of Vanderbilt community members gathered for “Vanderbilt Stands With Ukraine” demonstrations on March 1 at 11 a.m. CST and March 2 at 5 p.m. CST. The marchers called on Chancellor Daniel Diermeier to explicitly criticize Russian attacks in the ongoing war between the two countries.

The protests were organized by Ukrainian first-years Diana Nalyvaiko and Mariia Marchuk, as well as first-year Zacarias Negron. The demonstrators began at Alumni Lawn on both days and continued across campus to the temporary offices of the Vanderbilt administration at 19th & Grand on March 1 and to the Wyatt Center at the Ingram Commons on March 2. 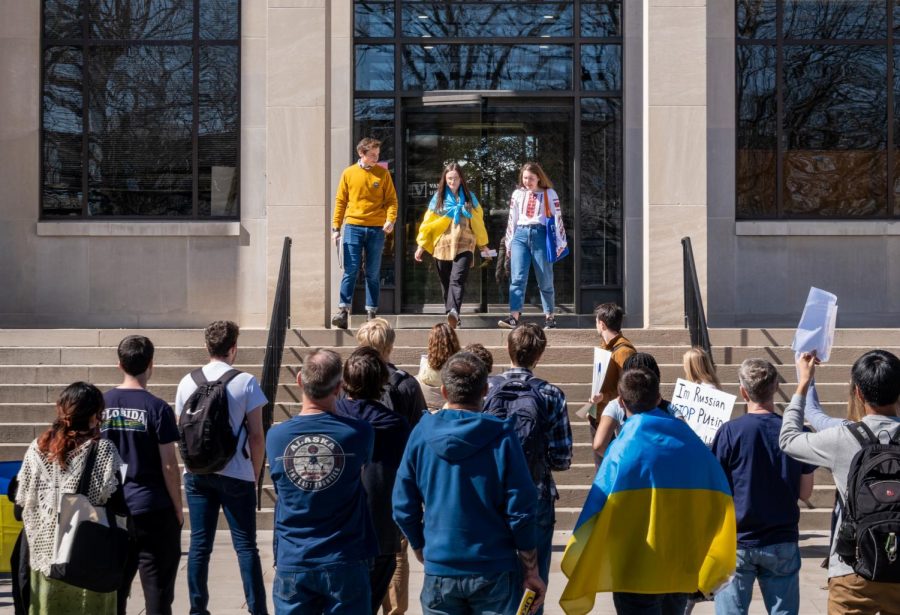 The roughly 100 protestors donned blue and yellow clothing, held signs expressing solidarity with Ukraine and shouted chants, such as, “No more war! No more silence!” and “Vandy for Ukraine,” as they paraded for nearly an hour.

After months of a military buildup of troops and equipment along the border, Russian President Vladimir Putin announced a “special military operation” in Ukraine on Feb. 24. Russia has since invaded Ukraine from the northern, eastern and southern parts of the country, launching attacks by land, sea and air. Russian forces captured control of the important port city of Kherson on March 2, and the United Nations reports that at least 874,000 people have now fled Ukraine to neighboring European countries as refugees.

Nalyvaiko shared the impact that the Russian attacks have had on her hometown and family. She said her father, uncle and cousins are currently serving in the Ukrainian military and that she is “incredibly proud” of them.

“My hometown is burning right now as I’m addressing you,” Nalyvaiko said. “They [Russian troops] are burning our villages, hospitals, kindergartens, schools and residential buildings. They are killing children, their parents and our soldiers, the people who are protecting our country.”

Assistant professor of Russian and East European Studies Kathryn David conducts research on the history of Soviet Ukraine and Russia and voiced her evaluation of the escalated conflict in the region. She referred to it as a “huge miscalculation” on Russia’s part.

“I continue to be shocked by [the invasion], especially the brutality of the violence and how much of it is directed toward residential areas and civilian populations,” David said. “I think what they [Russia] have failed to take into account is how little support Russian occupation has in Ukraine. This is not how you get people on your side. They have essentially alienated any group in Ukraine that would have considered itself to be pro-Russian at this point, and they really underestimated the Russian population, which does not at all seem to be in support of this war.”

Diermeier issued a statement on Feb. 25 expressing support for victims of the violence.

“Our hearts and thoughts are with all those affected as we watch this terrible and heartbreaking situation in Ukraine unfold,” the statement reads. “Vanderbilt stands in support of all members of our university community impacted by these events, especially those with connections to the region, and we have reached out to those groups individually.”

Nalyvaiko said she felt “left out,” frustrated and unsupported by Diermeier’s statement. The university did not respond to The Hustler’s request for comment.

“This community that I just joined six months ago does nothing,” Nalyvaiko said. “When we have this problem in our country and we need help, we don’t get it.”

Similarly, David supported the student protests and said she thinks Diermeier’s statement is “shameful.” She said that students “felt abandoned” by the statement.

“It made it sound like Ukraine was hit by a hurricane or an earthquake or some other natural disaster instead of an invading army. I know that Ukrainian students were really offended by that statement,” David said. “I want to listen to their [Ukrainian students’] voices and support them and try to encourage the university to take a stronger stance.”

Nalyvaiko and Negron said they stand in solidarity with the Ukrainians and pressured the university to openly stand against Russia in the war.

“We believe that the academic community holds an unprecedented amount of political and social influence, and we are writing this letter today as strong demand for the intellectual elites at the world’s leading higher institutions to use the platform bestowed upon them to take a definitive stance today,” a letter from the pair reads. “The inaction of universities, as well as their cooperation with the aggressor states, legitimizes the power of such regimes and their actions.”

Attendees of the march were encouraged to sign a petition to the university demanding an official statement by Chancellor Diermeier condemning Russian actions and to support charities assisting the Ukrainian people. A “Stand With Ukraine, Vandy” GroupMe has been created to organize the group’s efforts.