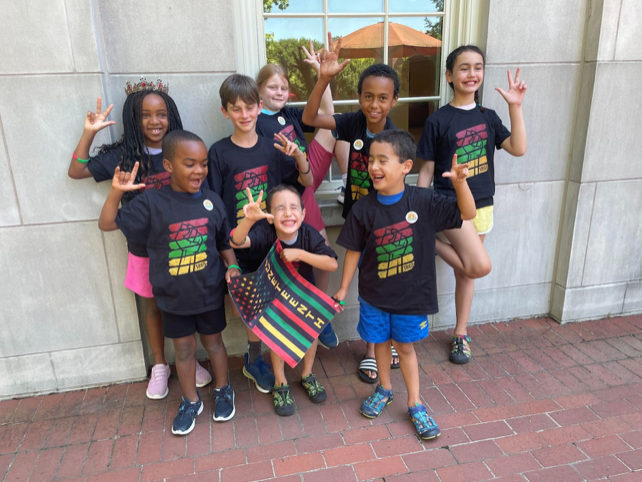 Growing up on Commons

With all its pros and cons, growing up on a college campus is one unique experience.

If you think Vanderbilt becomes a ghost town over the holiday and summer breaks, you’re highly mistaken. When students are away, the Commons kids come out to play.

Some of the first people to greet first-years upon arriving on campus are the Commons faculty heads of house. Throughout the school year, they invite students into their in-house apartments for events, offer advice and largely create the culture of each house.

The faculty heads are usually not alone, though. They’re often accompanied by another very special group of people who also call Vanderbilt home: their kids. Between the dean of the Commons and the 10 faculty heads of house, 16 kids, including two sets of twins, live on Commons—ranging from age 6-18 with a dozen being under age 12.

While they may not be crying alongside us over general chemistry homework, the Commons kids are truly a part of the Vanderbilt community. They don’t just share our dorm houses with us; they eat breakfast alongside us, enjoy campus social events and even attend football games with us. This campus has become our home away from home, but it is their everyday home, and growing up on Commons is one very interesting experience.

Life on the Commons

Being the sweethearts of Commons comes with a lot of perks. For the younger kids, summertime movies on the lawn, endless brownies and free Vandy swag are at the top of the list. Apparently, move-in day isn’t just thrilling for new students. It’s also the “most free stuff day” according to nine-year-old Ezra Magut, son of Gillette House’s Dr. Carol Zeigler.

“People give you free stuff just because you live here,” Ezra said. “The coolest free thing I got last year was probably a clear Vanderbilt bag.”

The kids relish telling their school peers about the many “college parties” they attend. Fall for the Arts was the most recent one, and, like a “true college party,” it boasted hot dogs and Diet Coke, much to the children’s excitement.

The college student was crazy I guess. There was a cookie I wanted, it was the last one, and they took a bite out of it.”

Let’s not forget about the older kids, though. The eldest of the Commons kids, Kat Pendergrass of West House, is planning to celebrate her 18th birthday by throwing a floral-themed party in the backyard of the house of Dean of the Commons, Melissa Gresalfi. Kat considers herself the Commons historian and can list all the houses in order by date constructed or size. She’s also taken on the role of babysitter for some younger Commons kids. In addition to its proximity to Nashville, Kat said she enjoys life at Vanderbilt because it’s just a short walk to the University School of Nashville where she’s a high school senior.

“I work in town, I’m a nanny in town, school is here, my activities are here, all my friends are here,” Kat said. “It’s actually so much fun. I would say sometimes it’s overwhelming, but you’re literally never alone. Even if I’m alone in my apartment, if I need something, everyone’s upstairs.”

Having pets on Commons—and there are a lot of them—makes the kids’ extraordinary lives feel a little more ordinary. The Commons’ animal friends include dogs, birds, fish, snails and lizards. For nine-year-old Luiza Castilho of Memorial House, having a dog-walking routine adds organization to Commons life. She tries to walk her dog, Chance, every couple of hours, while her younger twin brothers Jack and Paulo, age 6, are probably playing soccer with Ezra.

“We have to walk him almost every two hours,” Luiza said. “We have a routine because he doesn’t have a backyard to go into. Even though he would probably just stay there, we can’t really just let him stay off-leash on the terrace with nothing guarding him.”

One of nine-year-old Annika Gresalfi’s favorite things on campus is watching the women’s basketball team, but she also loves having her music lessons off campus and riding her bike with nine-year-old Reina Robinson of Murray House. 16-year-old Nick Roston of East House enjoys walks at Dragon Park and seeing movies at the Belcourt Theatre. In their free time, seven-year-old Antonio Robinson of Murray House watches TV, twelve-year-old Ansel Gresalfi plays soccer or hockey and nine-year-old Jordan Noble of Stambaugh House likes to sell Girl Scout Cookies (coming to a Stambaugh House near you in January).

Every time I bring it [living at Vanderbilt] up to someone, it has to be a whole explanation. They always have a million questions.”

If there’s one thing that unites all the Commons kids, it’s their love of soccer. They can be found playing matches on many evenings of the week. Nick enjoys watching Vanderbilt soccer games and even Roosevelt named soccer games as his favorite part of living on campus. The younger kids especially love when students stop to join them in a game or even just have a conversation.

When the students are away…

The Vanderbilt campus serves as a year-round, giant playground for the younger Commons kids. Their favorite activities include playing outdoors, having friends over, riding their bikes or having dinner on the balcony of the Commons dining hall. The holiday and summer seasons, however, offer even more.

According to the kids, an empty dormitory makes for perfect hide-and-seek grounds. There’s even more to do outdoors when Vanderbilt students are on break, including movie watching, slip-and-slides and parents versus kids water balloon fights on campus.

While dorm hide-and-seek may not top their list, the Commons teens have their own reasons for enjoying the university’s breaks. Having lived here since age 12, Nick has experienced both sides of Commons kid life—the wide-eyed younger years and the pre-college years of independence.

“When the students aren’t here, it feels how living in midtown in an apartment would feel,” Nick said. “I think it’s better when the students are here. It feels a lot more alive and vibrant. I can talk to the students; I’ve been mistaken for a freshman by a lot of people.”

Raising a family on Commons

Raising a kid on a college campus is no easy feat. In his sixth year as Stambaugh head of house, Dr. Roosevelt Noble is currently the longest-serving faculty head of house on Commons.

“There was a certain level of guilt almost, because you feel like you’re robbing your kids of a normal childhood by having them in an environment where everybody is 10 or 15 years older than them,” Noble said.

Rather than isolation, he and the other faculty heads have found the exact opposite. He said the campus has served as a safe environment for the kids and offers a unique experience with more diversity and community than can be found in most neighborhoods. The faculty heads of house feel comfortable knowing there are other parents here to look out for the kids. This strong sense of community is no coincidence, as much consideration goes into selecting the faculty heads from the large applicant pool.

Dr. Renã Robinson joined the Commons community this year as the Murray faculty head of house. She was relieved at the ease of transition for her two children, Reina and Antonio, who immediately joined the large family of Commons kids.

I would say sometimes it’s overwhelming, but you’re literally never alone. Even if I’m alone in my apartment, if I need something, everyone’s upstairs.”

“Especially when they [her kids] saw the other children, that was a winning moment for us,” Robinson said.

It’s not all sunshine and rainbows

Don’t be mistaken, the Commons life isn’t all luxury. The younger kids especially have some passionate complaints.

“College students take over things I want to do and talk about weird stuff,” Reina said. “Yesterday, we were about to play foosball but so many students were taking over and I wanted to play against my mom.”

Reina also vividly remembers the time a student took the last cookie in the Commons dining hall, despite seeing her standing there waiting.

“The college student was crazy I guess,” Reina said. “There was a cookie I wanted, it was the last one, and they took a bite out of it.”

Gardening is a whole issue on its own, according to Luiza.

“Even though we have our apartment and terrace, you have to plant things in pots because you can’t just plant them wherever you want to,” Luiza said.

Some of the kids agreed that the only time they desire to live off campus is when it gets loud and difficult to sleep at night. Oftentimes, students don’t realize a Commons kid’s room is right on the other side of the lobby or kitchen wall. Each of the 11 faculty homes—the Dean’s house included—is unique in the conditions that come with its location.

Across all ages, there is one shared experience of the Commons kids: It’s a true task convincing and then explaining to classmates and friends that they do in fact live on a college campus. It usually starts with clarifying that they’re not living in a dorm room.

“People think it’s weird. Every time I bring it up to someone, it has to be a whole explanation,” Kat said. “They always have a million questions.”

Just like many Vanderbilt students did, the Commons kids also want to branch out and leave home when it’s their turn to go to college. Of all the younger kids, only Luiza and Ansel hope to later attend Vanderbilt.

“Just so I can go around and say, ‘okay, so that was where I lived,’” Luiza said.

As a student, though, she wants to live in a dorm other than Memorial, where she’s spent years of her childhood.

Although just in fourth grade, Ezra already has a goal to run cross country and track at Oregon University, following after his dad who ran for Belmont University.

“[My dad’s] assistant coach owns a store in East Nashville that sells running shoes, and that’s where I get my running shoes,” Ezra said. “[The assistant coach] went to Oregon. I went in [his store] one time and said, ‘I like those helmets,’ because they were Oregon helmets. And he said, ‘Maybe if you run for Oregon, I’ll give you one.’ I had an idea that after I finish college at Oregon, I’ll come back and say, ‘I went to Oregon. Give me one of those helmets.’”

Kat is excited to branch out for college next year. She hopes to attend Lewis and Clark College for environmental law as an undergraduate and later apply to its law school. She’s confident that her college experience will be no less exciting simply because she’s already lived on a campus.

Nick, currently a high school junior, says he’s taken advantage of Vanderbilt’s many learning outlets such as the Wond’ry, when exploring his career goals. Planning to attend fashion school or a liberal arts college, he believes living at Vanderbilt has given him a good perspective for what to expect in college.

Wherever their futures may take them, it’s safe to say the Commons kids have high expectations for a college experience.

The Vanderbilt Hustler welcomes and encourages readers to engage with content and express opinions through the comment sections on our website and social media platforms. The Hustler reserves the right to remove comments that contain vulgarity, hate speech, personal attacks or that appear to be spam, commercial promotion or impersonation. The comment sections are moderated by our Editor-in-Chief, Rachael Perrotta, and our Social Media Director, Chloe Postlewaite. You can reach them at [email protected] and [email protected]
All The Vanderbilt Hustler picks Reader picks Sort: Newest
Subscribe
Login
2 Comments
Newest
Oldest Most Voted
Inline Feedbacks
View all comments
M
Melissa Gresalfi

“like a ‘true college party,’ it boasted hot dogs and Diet Coke” might be my favorite insight into the kids’ experience of life on a college campus….

Elise- such a great article!