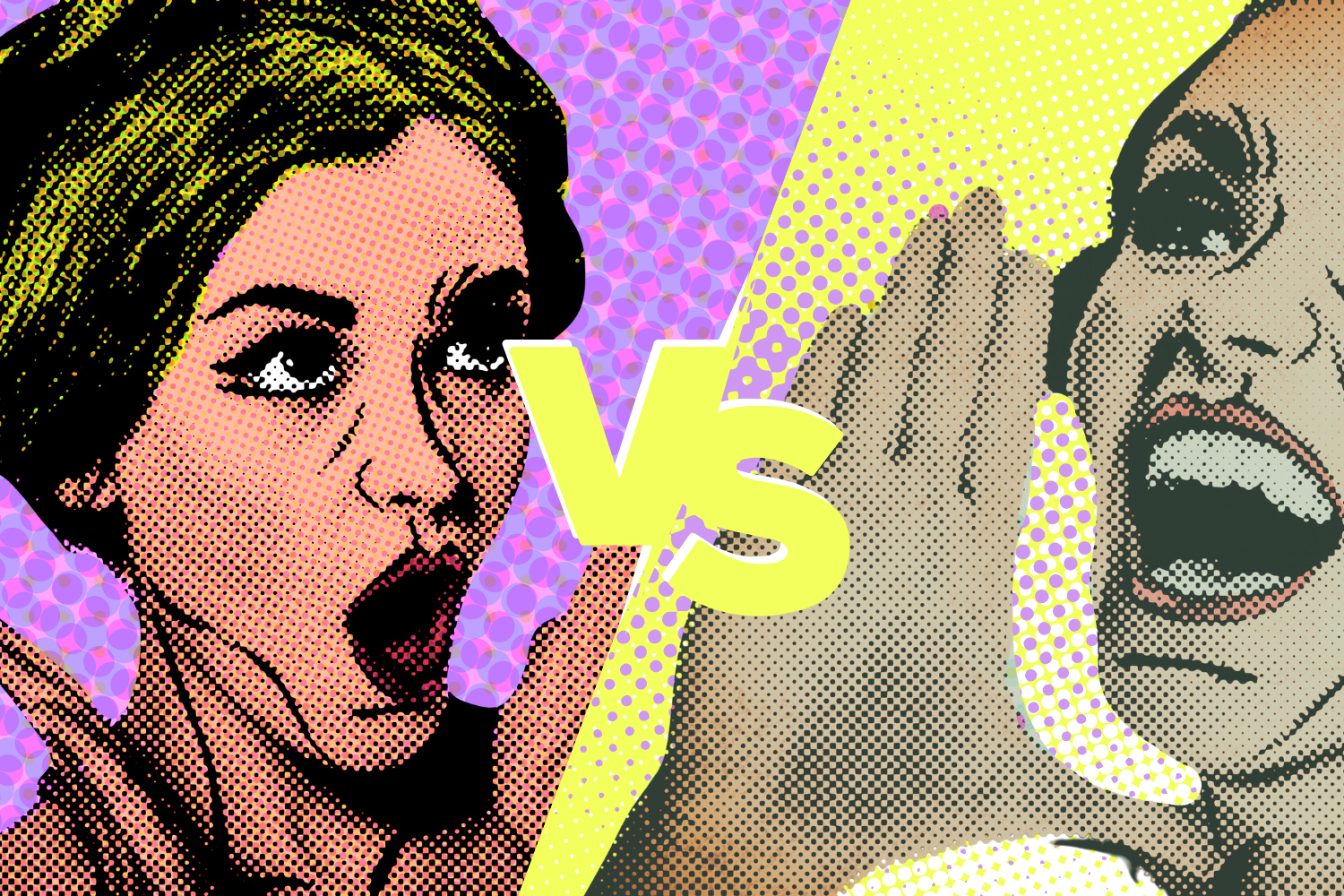 Graphic depicting the competition between women onscreen and in the workforce (Hustler Multimedia/Alexa White). (Alexa White)

Graphic depicting the competition between women onscreen and in the workforce (Hustler Multimedia/Alexa White).

TADROSS: Women, why are we hurting each other?

We need to stop blaming fellow women for female competition and instead reflect on how society makes us feel like we need to compete with each other.

A comment on my last op-ed about male accountability stated that, contrary to my argument, “the biggest hindrance to women advancing is other women trying to tear them down and not men.”

We hear about “mean girls” everywhere from the elementary school playground to the business world. We’re all familiar with it. The tension between two women in a class, on a sports team or in the office who dislike each other is second to none. If you’ve experienced a situation like this, you know that—no matter how cruel the rivalry gets, nor how much of a feminist you are—each woman is not only okay with disliking each other, but may even enjoy it.

In reality, female rivalry may not be as much a reflection of women as it is a reflection of men. We will only be able to recognize the causes of female conflict when we overcome the trope of female competition that leaves us feeling pessimistic about feminism. The origin of much female conflict, in my eyes, begins with the expectations and stereotypes that are associated with women.

Are women “meaner” than men?

A cross-company analysis published in the Harvard Business Review in 2019 found that women are no more untrustworthy or antagonistic with other women than men are with other men. Another study of students in grades K-12 found that boys rank higher in physical aggression and equally in relational aggression compared to women at every grade level. These statistics show that relationally aggressive tendencies that are typically associated with women, such as gossiping and exclusion, are not gender-based.

For a while, I accepted this research as resolution of the “mean girls” problem—women are only perceived as meaner than men because society is conditioned to expect them to be nicer. However, this data only tells half of the story.

Even though women are not “meaner” than men overall, many of us are still uncomfortable seeing each other in power. Compared to just 26% of men, 39% of women report preferring a male boss over a female boss. Female employees switching from a male to a female manager receive less support in their job roles.

Our society not only normalizes animosity between women, but is obsessed with it. Just consider reality television shows like “The Bachelor” and “Selling Sunset” that revolve entirely around women fighting and being jealous of one another.

It is easy to claim you are not a part of the problem, but many of us hate on successful women or have experienced the rush of watching women banter on screen. We need to stop denying our bad habits and recognize where they may come from to see the paradoxical truth that the “mean girl” stereotype is really not our fault.

There are countless potential explanations for female competition: mating competition, internalizing the patriarchy, seeing a workplace with a limited number of women and more.

Nadiah Kristensen, a research scientist in evolutionary modeling, uses the idea of the “patriarchal bargain” to explain that women criticizing fellow women is sometimes the only way to gain relative power in a system that disadvantages them.

Kristensen’s patriarchal bargain reminds me of my first major experience with sexism. In my sophomore year of high school, I published an article about why a local all-boys school should accept women, and it went viral in my area. Boys in my school approached me during school assemblies to question my logic, and I heard people talking about me behind my back in the hallways. Girls who had previously agreed with me that the all-boys school should be co-educational were suddenly silent on the issue. They were likely afraid of experiencing the aggression and male taunting that I was facing.

Honestly, I don’t blame them. By gossiping about me, they were keeping themselves safe. Women don’t tear each other down because they dislike each other, but because they need to do so to succeed in a male-dominated society. For women to change, the system needs to change.

The patriarchy getting inside many women’s heads means that discrimination and societal expectations incentivize us to compete. In other words, many women compete because we are told to be a woman in a certain way. If women are told that they need to be attractive and personable, many will defend that they embody these traits—and tear down others who get in their way of appearing in that manner. If women hear people insult a female politician as “angry” or “ugly,” many will defend that they do not embody these traits—and criticize other women for these stereotyped downfalls. Fewer of us (if any) can “win” in this type of society, making life a competition.

By gossiping about me, they were keeping themselves safe. Women don’t tear each other down because they dislike each other, but because they need to do so to succeed in a male-dominated society.”

A prime example of this type of female rivalry is demonstrated on Season 23 of “The Bachelor.” While former pageant queens Hannah Brown and Caelynn Miller-Keyes vied for Colton’s heart, they continued their rivalry from the 2019 Miss USA pageant. Brown slipped, saying “I f**ing hate her” in an interview, but both women refused to disclose the source of conflict.

Tabloids dug up stories of Miller-Keyes advancing farther than Brown in the Miss USA Pageant and finishing runner-up. Can we blame these two women for their rivalry? Pageants are likely just another form of the patriarchal bargain: Women compete to gain recognition as pretty and well-spoken, as they’ve been told they should be throughout their lives. It’s hard to not compete with other women when you are told to be a woman in a certain way.

Subconscious standards in the workforce

The workforce’s subconscious standards can also force women to compete. A 2000 study by Turknett Leadership Group assigned a reading about the same, fictitious, successful person to two focus groups of men and women; the only difference between the passages the two groups received was the gender of the person. “Howard” was described as a “visionary,” while “Heidi” was labeled “critical” and “hard to work with.” When women are criticized in positions of power, many are incentivized to label other women as “critical” or “hard to work with” like “Heidi” to remain competitive in the eyes of men in leadership.

In a male-dominated workforce, women employees see a limited number of women in high positions, leading many to assume that there are fewer opportunities for them. The result is the Hunger Games for female success. Research shows that when competition for job spots increases, women are less inclined to bring other women along. We recreate a biased status quo, albeit through no fault of our own.

Therefore, women are often blamed for the lack of female advancement in the workforce because we don’t always support other women. Women can start breaking this pattern by empowering one another, but female rivalry will not go away until the system that causes it is addressed.

Kristensen’s research further shows that when one woman tears down another woman in front of others, the rest of the group—men and women included—often follow suit. In this way, one woman who lacks self-confidence can hurt another woman while simultaneously reinforcing the patriarchy.

Psychologist Meredith Fuller explains in a 2013 Psychology Today article that everyone has unconscious, negative motivations, such as the desire to be powerful. If we are not aware of these drives, we may act on them in ways we don’t notice—such as by not supporting other women out of insecurity.

It is easy to blame women for their lack of support for each other, but this competition is really a product of a society that makes women feel like they need to compete to succeed. ”

Fuller explains that people can gain greater control over their actions by “integrating” them into their personalities through self-awareness and behavioral changes. For example, observing that your anger toward an attractive woman is not really anger toward her, but anger toward a family member or greater society that had told you that you needed to be pretty. Redirecting your anger toward its real source enables you to heal and develop compassion for other women, thus, stripping the patriarchy of some of its power.

However, we also need to stop using the “mean girls” trope and amplifying women’s perceived responsibility via media outlets, as these practices acquit men of responsibility for sexism. Female rivalry is one of the biggest realities holding back feminism today. It is easy to blame women for their lack of support for each other, but this competition is really a product of a society that makes women feel like they need to compete to succeed.

None of us are innocent in the fight against gender inequality, and we all need to take accountability to work toward a durable solution. Men need to start recognizing that women are failing to support each other because of their roles in society. Women need to stop accepting our role as perpetrator. We deserve better and should forgive ourselves for engaging in female rivalry and move forward with renewed self-awareness.

The Vanderbilt Hustler welcomes and encourages readers to engage with content and express opinions through the comment sections on our website and social media platforms. The Hustler reserves the right to remove comments that contain vulgarity, hate speech, personal attacks or that appear to be spam, commercial promotion or impersonation. The comment sections are moderated by our Editor-in-Chief, Rachael Perrotta, and our Social Media Director, Chloe Postlewaite. You can reach them at [email protected] and [email protected]
All The Vanderbilt Hustler picks Reader picks Sort: Newest
Subscribe
Login
1 Comment
Newest
Oldest Most Voted
Inline Feedbacks
View all comments
A
Allen

Every issue is someone else’s fault. Good luck to all the women and men at Vanderbilt once you leave your sheltered harbor of grievance obsession.