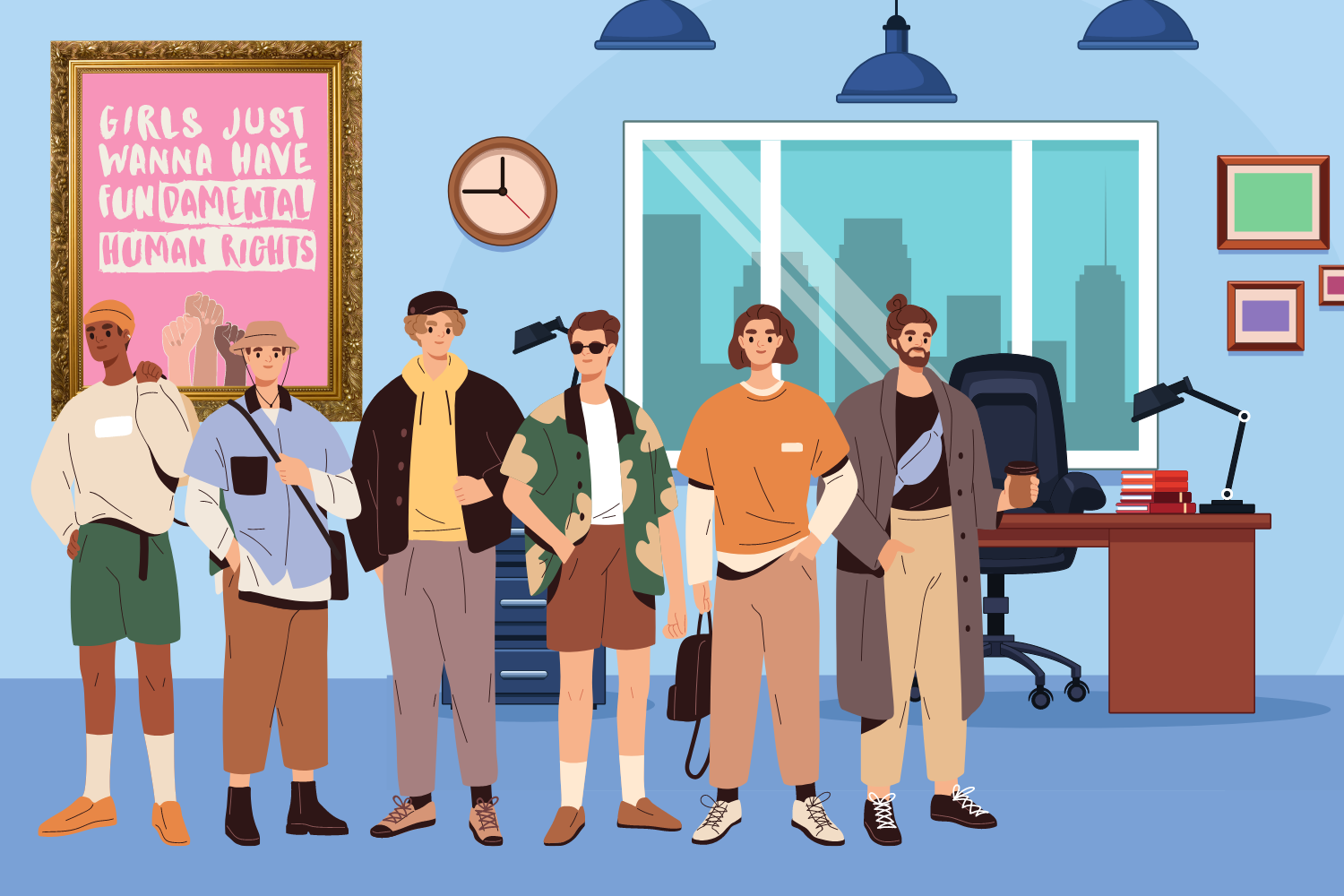 Graphic depicting an office of men in front of a sign fighting for gender equality. (Hustler Multimedia/Alexa White) (Alexa White)

Graphic depicting an office of men in front of a sign fighting for gender equality. (Hustler Multimedia/Alexa White)

TADROSS: Men’s lack of accountability is shackling women in the workforce

In the heat of a women’s revolution in the workforce, men’s unwillingness to take responsibility threatens to stop gender equality in its tracks.

Gender inequality might be one of the biggest accountability scams of the century.

In the late 1990s and early 2000s, female employees at Morgan Stanley, Merill Lynch and others filed sex discrimination claims resulting in the firms paying up to $100 million in legal settlements. As a result, companies initiated “merit-based” hiring tests and diversity training to increase the representation of women in their ranks.

However, corporate America has fallen tremendously short of its goals.

Diversity programs only positively impact employee behavior for 1-2 days afterward and even spark backlash. For every 100 men promoted to first-level management, only 72 women are promoted. Every year, 70% of workforce sexual harassment goes unreported.

What are we doing wrong?

In the revolution for women’s rights, we have hit a wall with men who are unwilling to take responsibility for their actions. Men have historically created a workforce in which day-to-day working hours, subconscious expectations and even workplace architecture favor their comfort and achievement. Many paint their biased reality as “gender neutral” to escape the accountability that could undermine their masculinity, stopping gender equality initiatives in their tracks.

To make progress, we need to replace “women’s initiatives” with real accountability—in employees’ minds and in companies’ data.

Why men lack accountability and why women take all of it

This quote comes from Margaret Atwood, author of The Handmaid’s Tale and a renowned fiction author. It reflects the reality that men’s fear of embarrassment often motivates oppression.

Each gender is raised differently when it comes to accountability.

In the revolution for women’s rights, we have hit a wall with men who are unwilling to take responsibility for their actions.To make progress, we need to replace “women’s initiatives” with real accountability—in employees’ minds and in companies’ data”

In his 1976 book The Selfish Gene, ethologist Richard Dawkins explains that over time, sex cells evolved into two different types – aka two sexes – in an attempt to reproduce faster. Male sex cells prioritize quantity in biology, even if it means mating with multiple people, while women benefit from finding a specific, loyal partner because their bodies invest so much time and energy into each child.

Women have more choice in forming relationships than men (they are more “picky”) and have better social cognition that enables them to include and exclude people from groups. As a result, many men turn to women to validate their masculinity, and, in Atwood’s words, fear women will “embarrass” them.

Men are often expected to free themselves from the expectations of their mothers—and women as a whole—at a young age. Supporting women and acknowledging personal flaws requires humility and self-correction. They often score lower on tests of empathy than women, enabling them to disregard others’ emotions, silence other sexes and avoid accountability at all costs.

While women are often taught to be honest and avoid situations that harm themselves and others, men are taught to evade responsibility. Women are taught to accept injury. When we women see a large figure in the streets at night, feel an abusive family member’s anger, or say no to a sexual encounter, we acutely feel this vulnerability.

Gender discrimination is designed to insulate men from women and protect their masculinity.

Men dominate important decision-making spaces—from technology firms to the floor of Congress. Some believe that today men and women enjoy equal professional opportunity and that men earned their dominance in the workplace by merit. In reality, women have been systematically removed from professional spaces.

For instance, the field of computer science was developed by female scientists in the 1950s. Consider Mary Allen Wilkes, who coded the IBM 704. However, men began dominating the field as soon as it became perceived as important and lucrative, shifts that coincidentally both occurred when computers shifted from an “administrative” task to the core work of companies. Today, 67% of technology company employees are men.

The workplace doesn’t reward value, but being male. Girls see men as smart innovators, and seldom see the value of their own history. ”

Fifty years of U.S. Census data shows that when women join an industry—such as teaching or social work—in high numbers, that industry attracts lower pay and loses “prestige.” Consider “brilliance” bias. From ages 5-6, girls shift from having equal faith in their intelligence as boys do to seeing themselves portrayed as less smart and capable. Theories in school textbooks are named after men, regardless of women’s contributions. No one thinks of the women whose ideas were stolen because our brains expect every doctor or a scientist to be a “he.” For instance, Lise Meitner discovered nuclear fission but saw her husband receive credit. Rosalind Franklin’s discovery of DNA’s shape is often credited to Watson and Crick.

Girls see men as smart innovators, and seldom see the value of their own history.

After 10 years, 17% of men leave careers in technology, compared to 40% of women. Most women who leave these positions credit their choice to “workplace conditions” and “undermining behavior from managers.” It’s hard for women to thrive and get credit for ideas in an environment that rewards being something they’re not: a man.

The workplace doesn’t reward value, but being male.

What does lacking accountability look like in the workplace?

Men do not solely succeed because of the “meritocracy;” this myth exists to keep women out while disguising “made for men” as “gender neutral.”

Additionally, although 70% of workplace sexual harassment goes unreported, many companies fail to collect data on this phenomenon, destroying any chance for accountability and change.

Then there’s the “promotion gap.” Why are women not nominating themselves for promotion as much as men? Maybe because self-nomination systems are built to reward men’s overconfidence. It is not “gender neutral,” and women are not the problem. Requiring managers to collect promotion data by gender encourages a truly “gender neutral” approach—that is beneficial to not only women, but the transgender community, nonbinary people, and all people who do not conform to ‘traditional’ gender norms.

Despite this knowledge, data reinforces and perpetuates gender inequality by failing to record the experiences of women.

While it may seem like investing is a gender-neutral activity, research shows that men value investing research and high returns itself, while women value what their money can do for them, meaning that women look for different things in financial and investing apps.

For instance, if Robinhood is collecting feedback from their over 70% male audience, men are always the majority and the majority rules. At my internship this summer at an investing firm, the team responsible for our company app had no gender-separated data. In other words, no information about what women want in the product was collected, despite women having different perspectives on investing than men.

Businesses across the board lack data on the sentiments of their female employees and customers. They often fail to collect data on remediation of sexual violence accusations—one of the most important metrics for addressing workplace gender discrimination. Further, businesses often use reproductive toxins in products like plastics and menstrual products. As a result, women working in factories and using these products are at risk of various cancers, but because of limited research, the ingredients are not prohibited nor disclosed. Many of these products remain in production without any U.S. laws requiring ingredient listings.

Disproportionate harms to women can be simply resolved by disaggregating data by sex. Unfortunately, many companies are still resistant to making changes like these, despite them being the bare minimum for change.

How do we create accountability?

Lacking accountability means that the people who are perpetrating discrimination the most fail to show up to women’s rights events, and companies turn a blind eye to promotional and sexual harassment data.

Once all people are engaged, we need to deliberately acknowledge gender differences—that women often take too much accountability while men often take none—to change the status quo. We should even have gender equality events for men alone with an emphasis on accountability.

At these events, we need to emphasize proactively listening to female employees and looking for places in data where we may be missing their perspectives.

Then, show employees why accountability for sexism and promoting more women is financially beneficial for them: Research shows that companies with more women in leadership are on average 15% more profitable because of women’s empathy. Men need to see that logic used to protect their egos—like phrases such as “not all men”—not only stand in the way of women’s rights but their own professional success.

The gender equality problem is an accountability problem in a world where men are bred to escape expectations while women are pressured to conform to them. To get large companies to use their energy where it counts, we need to reach out to people with an emphasis on accountability so we can fight the data and social norms that maintain an unequal workplace.

The Vanderbilt Hustler welcomes and encourages readers to engage with content and express opinions through the comment sections on our website and social media platforms. The Hustler reserves the right to remove comments that contain vulgarity, hate speech, personal attacks or that appear to be spam, commercial promotion or impersonation. The comment sections are moderated by our Editor-in-Chief, Rachael Perrotta, and our Social Media Director, Chloe Postlewaite. You can reach them at [email protected] and [email protected]
All The Vanderbilt Hustler picks Reader picks Sort: Newest
Subscribe
Login
3 Comments
Newest
Oldest Most Voted
Inline Feedbacks
View all comments
K
KMFDM99

Has anyone else noticed that most of the “experts” on men are women?

Women’s lives are a daily struggle because of the lack of responsibility and accountability men take for the violence we deal with, unequal pay, discriminatory laws, unequal work at home, belittling language, product pricing differentials, and on and on. Men historically have not championed women’s equality because we’re still raising boys with an identity that is based on the domination of girls and women. That’s why they fear embarrassment the most–putting girls and women down, one way or another is the only way they can ‘be a man’ by definition–with physical force and economics by ensuring they make more money. Their lives, as do all of ours, get so much better when women’s lives improve. The data is quite clear on this. I detail this in my book: Call Me A Woman: On Our Way to Equality and Peace and provide habits of inequality we are living on a daily basis and the 7 Habits of Equality to replace them with.

You need to check your privilege. Women in Afghanistan, Iran, Cuba, Saudi Arabia or China would love to experience the freedoms we have as women in America. I can start my own business, be a CEO, become a doctor, be a mother, be a lawyer – I can be whatever I choose to be in America. I will overcome whatever obstacles are in the way.

It has been my experience in my career that the biggest hinderance to women advancing is other women trying to tear them down and not men.

Also, I thought that we didn’t know what a woman is anyways.