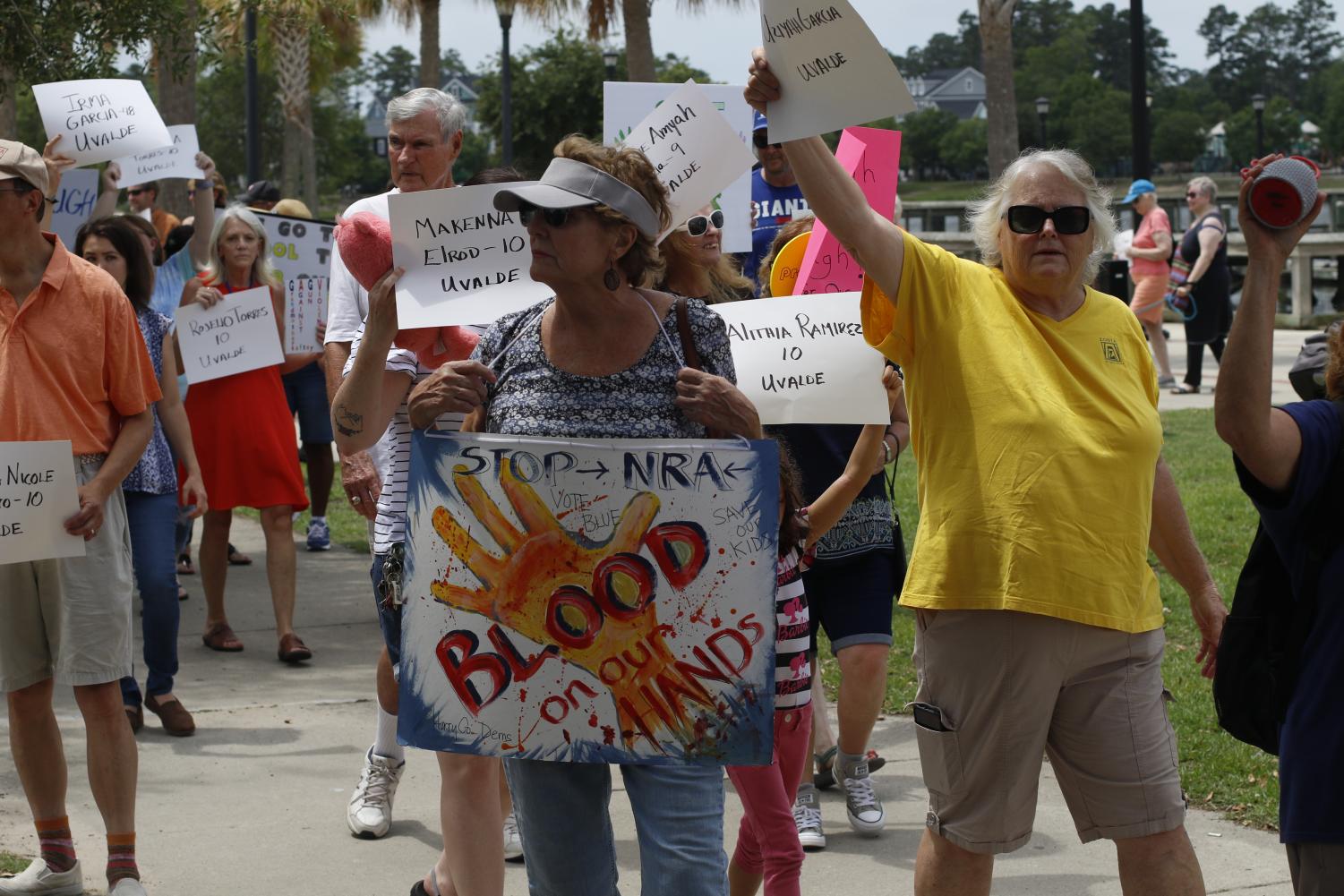 IN PHOTOS: March for our Lives protests nationwide

Following the shooting in Uvalde, Texas, the student-run, gun control advocacy group March for our Lives (MFOL) organized simultaneous protests across the country on June 11, showing a unified front from MFOL. Staffers of The Hustler, scattered around the country for the summer, reflected on protests they attended in their respective communities.

A protest for sensible gun legislation seemed unlikely to be found in South Carolina, but a quick search on the March for our Lives website led me right to one in touristy Myrtle Beach. Against a backdrop of Saturday morning softball and palm trees, a gathering of retirees held signs and sat in folding chairs with a smattering of parents and kids with signs sitting on the ground in the heat. The protest was repeatedly interrupted by honking car horns in support—garnishing cheers from the crowd, but just as likely was someone leaning out of a car window to shout slander at the small but fierce protest. 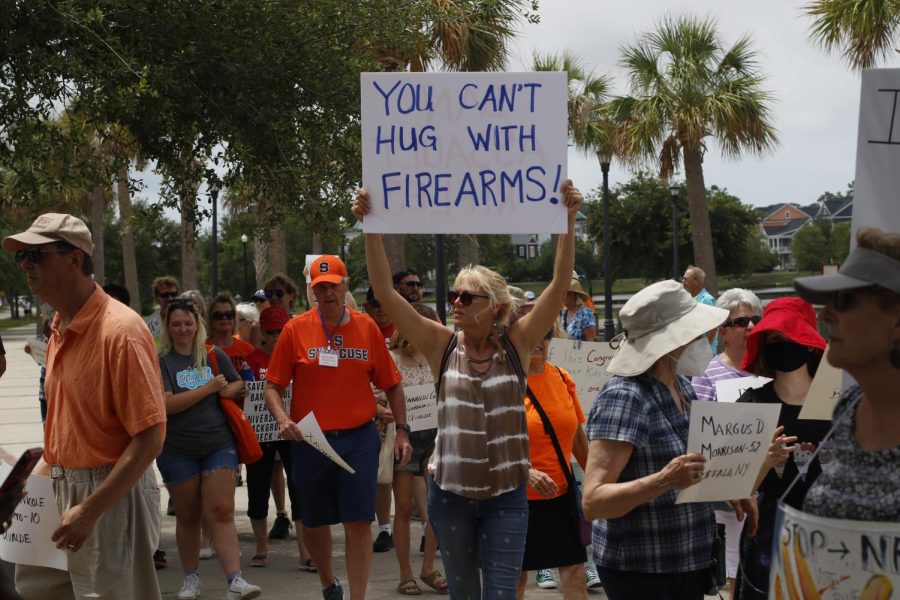 This protest hosted speakers not only from March for our Lives but also local politicians, and other gun advocacy groups such as Moms Demand Action and Grand Strand Action Together. A ninth-grade student from a local high school was the keynote speaker, and she touched many with the absurdity of needing to find nuisance in a speech about gun violence. She said she didn’t feel like she should need to stand out; the violence needs to stop. 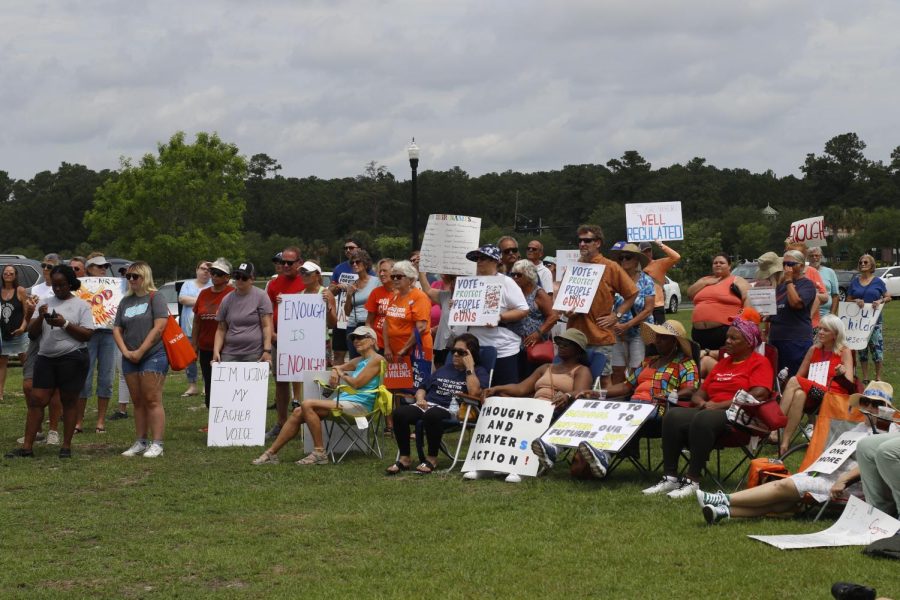 Gallery|3 Photos
Barrie Barto
Crowd listening to speakers at the March for Our Lives protest in Myrtle Beach, as photographed on June 11, 2022. (Hustler Multimedia/Barrie Barto)

Retired teachers brought tears to my eyes when they spoke about the effect of active shooter drills on their kids, and moms spoke about their relief in seeing their kids coming home safely after hearing about Uvalde, but they also spoke of hope. There was so much resilience in this slice of the population that was demanding change. 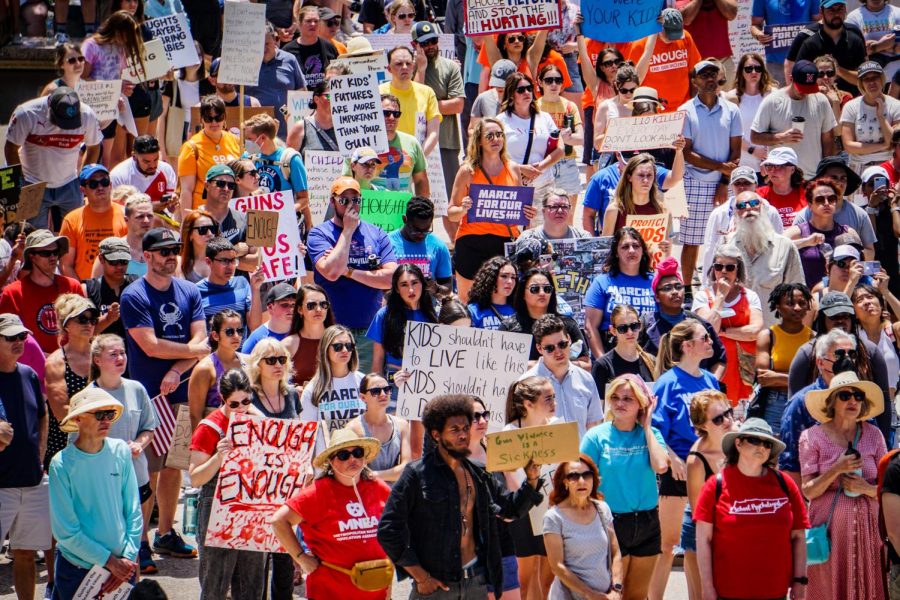 One of my friends at the protest said to me, ‘I know I’m supposed to feel good because I’m standing up for change, but I just wish we didn’t have to be constantly fighting.’”

A sentiment echoed by so many young adults and teenagers in the country. For as long as I can remember, I lived with that fear in the back of my mind, wondering if today was going to be the day my school appeared on the news–an addition to the seemingly endless stream of tragedies. Looking around at all of the people in attendance at the protest, I could see fear, pain and anger. Parents, teachers, students all carrying the weight of this responsibility that should not be on us. We are tired. 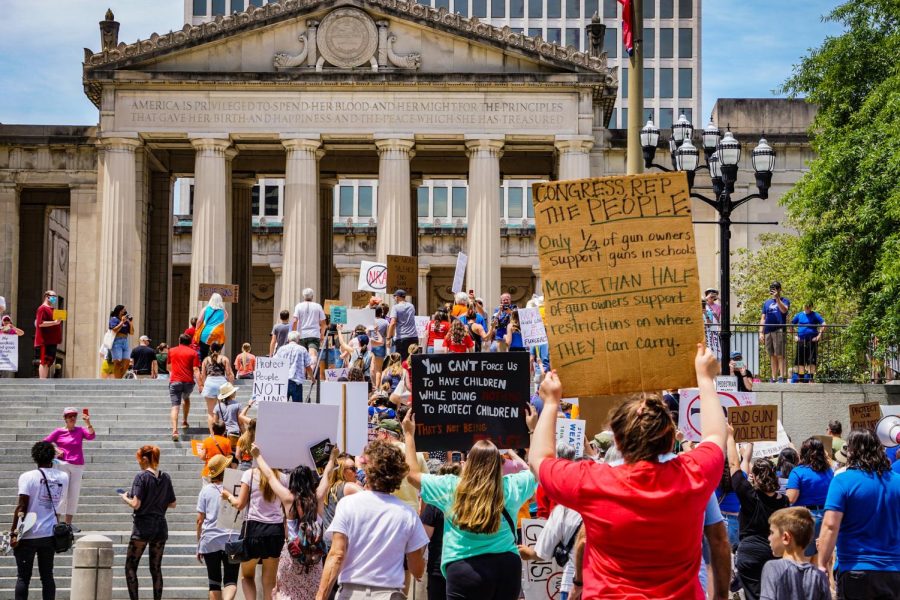 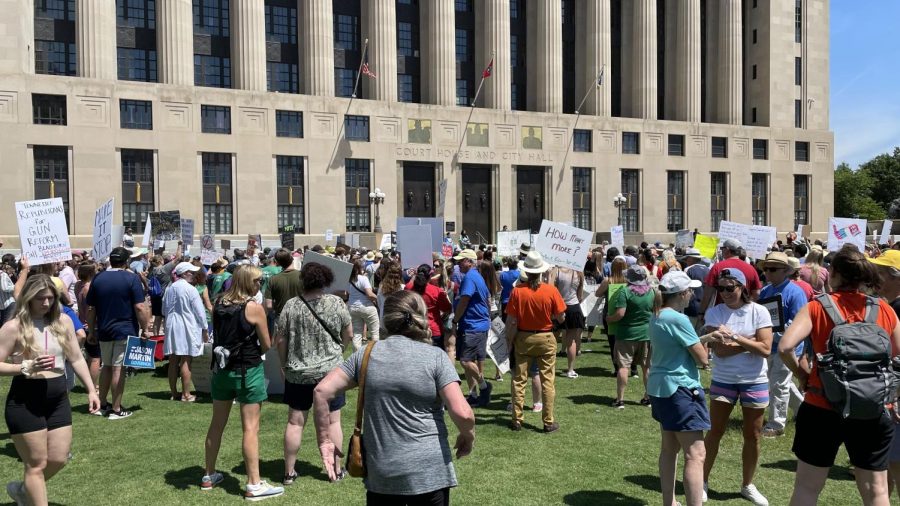 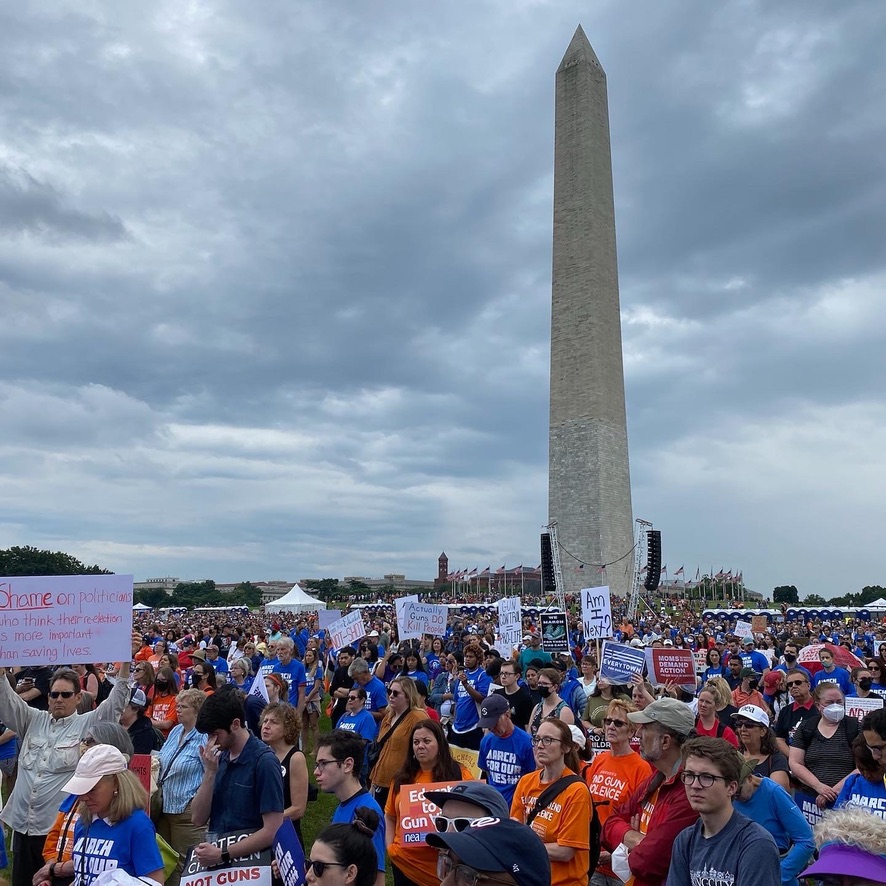 The three weeks that I spent with the national team planning the marches and the lobby days in D.C. were some of the craziest weeks of my life. Almost every member of the staff is under the age of 25, and the vast majority are currently students. The activism of young people is so incredibly important, and I am so proud of every single person that participated in every level of the march. Student voices are impactful, and we need to see the initial successes of the marches as a reason to not feel pessimistic about the future. This past week proved to me that if young people and students don’t use their voices, no one else will advocate for our needs. We have to be our own advocates and activists because we matter. 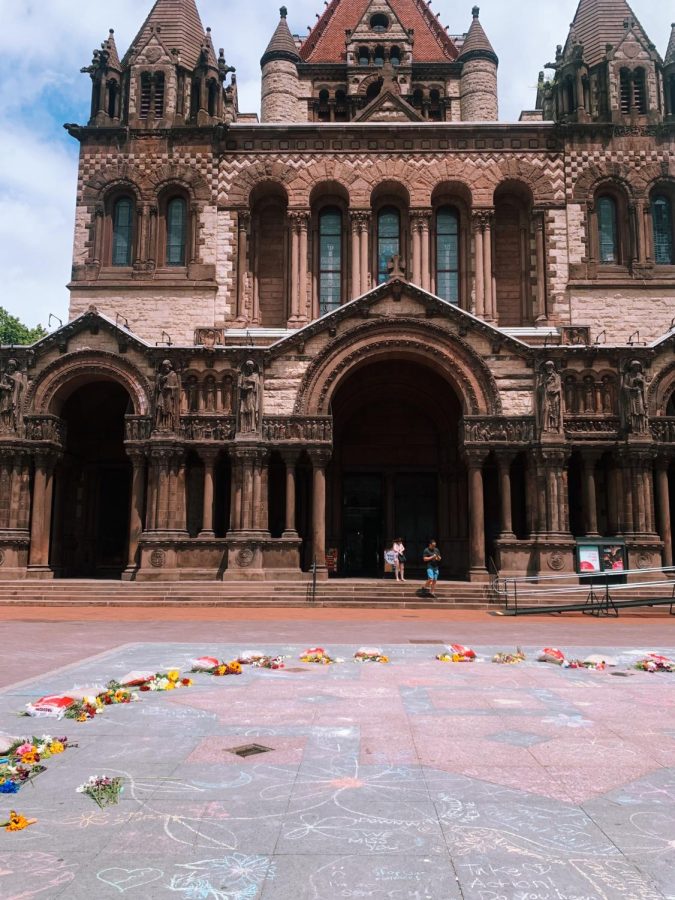 I visited Boston on May 27, three days after the school shooting in Uvalde. These pictures show the remnants of a vigil and school walkout that occurred on May 26 in Copley Square outside of Trinity Church. Messages and images in colored chalk lined the sidewalks along with flowers held down by bags of sand. One note was signed by a Sandy Hook shooting survivor.

It was a busy Friday in Boston–it was 80 degrees and sunny, the Celtics were competing in Game 6 of the Eastern Conference Finals in the North End, the Red Sox were playing at Fenway and Copley Square’s traditional farmer’s market was buzzing with people and stands just a few feet away from the church. Yet, the area surrounding the chalk and flowers was quiet. People—myself included—circled the demonstration slowly, almost in awe. I was struck by the juxtaposition of the colored chalk and the age of the Uvalde victims with the violent nature of the shooting.

As I traveled throughout the city that day, the image of the chalk messages didn’t leave my mind. It shouldn’t be this way, and it doesn’t have to be. 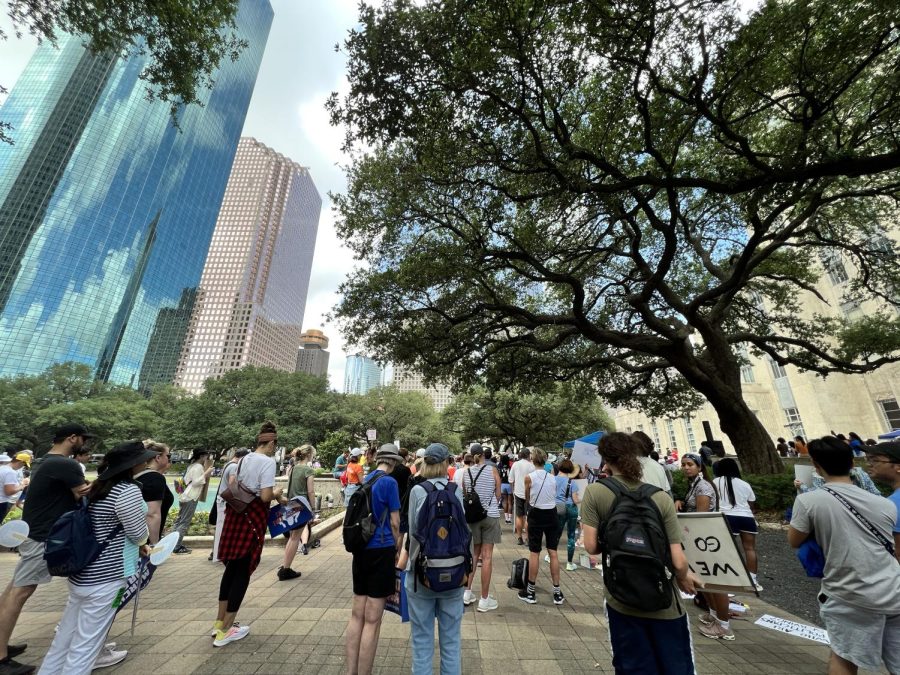 Protesting in Texas where the Uvalde elementary school shooting happened was surreal. It was great to see the community together but incredibly disheartening and sad to know the circumstances under which we were all there. I attended my first March for Our Lives protest at Houston City Hall four years ago, and our demands were the same as they are now.

I attended my first March for Our Lives protest at Houston City Hall four years ago, and our demands were the same as they are now. I hope next time I’m at City Hall, it’s under different conditions.”