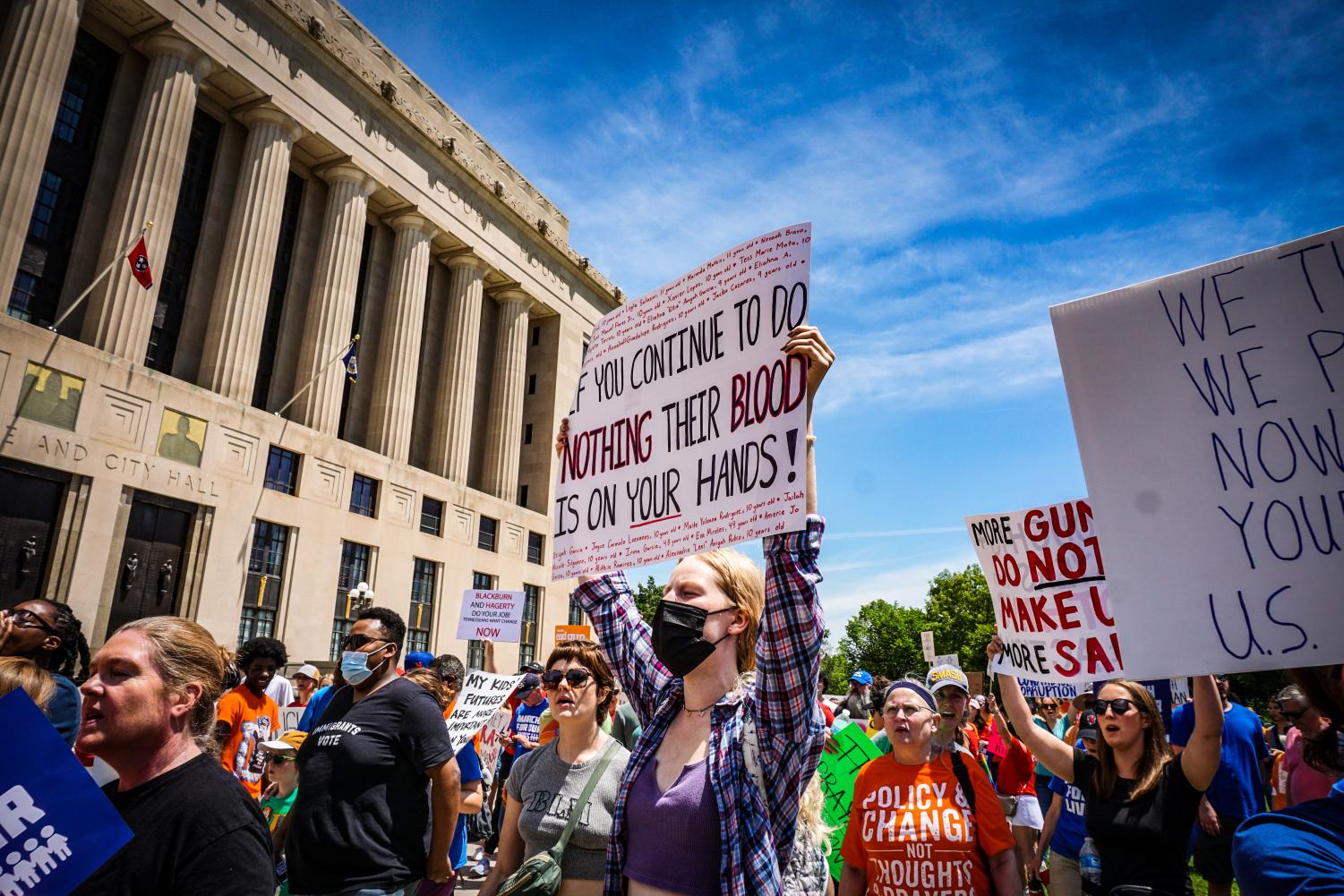 March for Our Lives held protests across the country on June 11 in response to recent mass shootings.

In response to a recent uptick in gun violence in the United States—including mass shootings in Buffalo, Laguna Woods and Uvalde—the gun control advocacy group March for Our Lives (MFOL) held over 400 simultaneous protests on June 11, across the U.S. and internationally.

Rising sophomore Danni Chacon, rising seniors Carson Ferrara and Madeleine Amberg and Shun Amhed (‘21) were among the primary organizers of the Nashville MFOL protests. Per Ferrara, around 1,000 attendees marched from Public Square Park, where the Municipal Courthouse is located, to Legislative Plaza.

“I care about this issue especially because I have a younger brother,” first-time protestor and rising junior Payton Breitzmann said about her reasoning for attending the Nashville MFOL protest. “It makes me not want to have kids, and that’s something that I’ve wanted to do for my whole life.

I don’t want to send my kids to school and be afraid that they’re going to be gunned down in science class.”

Many speakers took issue with Tennessee lawmakers, such as Governor Bill Lee, Senator Marsha Blackburn and Senator Bill Haggerty, all of whom oppose strengthening gun laws on the state and federal level. Speakers pointed out that many guns used in mass shootings are acquired legally and urged lawmakers to adopt stricter background check policies while attendees chanted slogans, such as “Vote them out!”

“I don’t look at it as a Republican versus Democrat issue. I look at it as, ‘who is trying to do something and who is not.’ I would say the exact same thing if these were Democratic politicians who were refusing to do anything,” Ferrara said. “Generally, the community wants the same thing. We want safer schools. We want to significantly decrease the chance of shootings occurring in everyday places like movie theaters, grocery stores and churches.”

McClain, a former police officer and a former AR-15 owner, recounted a time when she witnessed a child die from gun violence while on duty.

“Those 19 children and two teachers in Texas—they had heartbeats. Every innocent person who has needlessly died due to gun violence … they all had heartbeats,” McClain said.

Senator Blackburn, Senator Haggerty, the next time you want to claim to be pro-life, you need to think about the hearts that stopped beating.

Money and power were more important to you than the lives of your fellow Americans.”

Dasilva survived a 2018 mass shooting at a Waffle House in Antioch, Tennessee. Her brother, Akilah Dasilva, was killed in the shooting. Their family founded the Akilah Dasilva Foundation, an organization that fights gun violence, in his memory.

“They speak about it for a while and then they go back to normal. It doesn’t need to be normalized. We need to shed light on it. It doesn’t need to keep happening,” Dasilva said about lawmakers’ responses to mass shootings. “These lives are more important than politics.”

MFOL organizers coordinated with Neon Guard, a Nashville-based volunteer group that serves as an alternative to police presence at protests, to assist with safety at the event. Although MNPD was present at the event, Ferrara stated that the organizers did not have direct communication with them. Per Neon Guard member Cassie Norton (M.Ed. ‘19), several counter protestors wearing tactical gear and armed with guns and knives arrived at the march, but Neon Guard was able to deescalate the situation.

Rising sophomore, protest attendee and Nashville native Mayowa Kassim stated that she wished that the MFOL student activists had collaborated with more local organizations focused on issues facing minority communities, such as Workers’ Dignity, The Equity Alliance, Black Nashville Assembly and Gideon’s Army, at the event.

“Vanderbilt organizers need to be very intentional when they’re going into the Nashville community by contacting community organizations and asking what the community needs,” Kassim said. “Someone who experiences gun violence who’s undocumented may not be able to report it to the police or vote. Gun violence is just one facet of the issue of disparate inequality and systemic violence that exists, and your organizing should reflect that.”

In response, Ferrara stated that MFOL Nashville primarily worked with organizations that reached out to them first, due to the “tight turnaround time” of 10 days that the organizers had to plan the march.

“The goal going forward is to get more groups involved, to get them more visibility and give them a greater platform so that we can ensure that we’re getting the voices of everyone that needs to be heard in this issue,” Ferrara said.

Marches around the country

“I hold a lot of resentment after protests, because I think, ‘There’s all these people that are being failed every single day,’” D.C. protest attendee and rising sophomore Ellen Habteyonas said. “But, it does feel like something that I can do to be closer to a community that I believe in and support.”

Habteyonas stated that one of the most impactful moments of the D.C. march was when organizers paused 78 minutes into the demonstration to highlight the amount of time it took Uvalde police to respond to the shooting. Habteyonas also recounted how an agitator shouted and threw an unidentified object into the crowd during a moment of silence; he was escorted away and no further disturbances occurred.

The future of gun control legislation

MFOL first organized a nationwide day of protests in March 2018 in response to the mass shooting at Marjory Stoneman Douglas High School. After the protest, however, the Nashville chapter of MFOL eventually became dormant. Ferrara stated that he and the students who planned the 2022 protest now constitute the Nashville chapter of the MFOL organization but were not actively involved in MFOL prior to this summer.

Gun laws in Tennessee have loosened since 2018. In 2021, Lee signed a bill into law allowing Tenneseans aged 21 and older to carry handguns without a permit. On June 6, 2022, two weeks after the Uvalde shooting, Lee signed an executive order requiring schools to update their school safety plans but did not change existing gun laws.

“I’ve seen so many mass shootings happen in my lifetime, and my lifetime is only 19 years, but I haven’t seen massive change,” Breitzmann said. “I don’t really have a hopeful outlook but being at the protest made me feel a little bit better.”

A mass shooting is defined as an incident where four or more individuals are hit with gunfire. As of June 2022, at least 246 mass shootings have occured in the U.S. since the start of the year. This statistic puts 2022 on track to match 2021 as the year with the highest numbers of mass shootings since the Gun Violence Archive started tracking mass shootings in 2014.

On June 10, a bipartisan group of 10 Democratic and 10 Republican senators announced a proposed package of gun control and school safety measures, including the implementation of “red flag” laws, the closing of the “boyfriend loophole” and funding for school mental health resources.

“I think it is a step in the right direction, but we need more,” Ferrara said. “I feel like it was just a way for some politicians to respond to the pressure that the marches created so that they can say they did something, despite the fact that they know we need much more comprehensive legislation to decrease gun violence.”

Jones stated that the national MFOL is currently focusing on advocacy involving New York State Rifle & Pistol Association Inc. v. Bruen, a case that could expand people’s right to bring concealed weapons into public places and limit states’ abilities to maintain gun free spaces. The Supreme Court is set to announce their decision on the case by the end of this month.

MFOL is also working with Planned Parenthood on a response for the Court’s decision on Dobbs v. Jackson Women’s Health Organization that is likely to overturn Roe v. Wade (1973) and limit reproductive rights. SCOTUS is also expected to hand down their ruling on this case this month.

Ferrara emphasized that MFOL Nashville plans to continue mobilizing the community and putting pressure on lawmakers, although he said they have not yet planned specific future actions.

“I completely acknowledge that sometimes it can feel like you’re yelling at a wall when there doesn’t seem to be tangible progress happening, but there has been significant progress in other states,” Ferrara said. “I think a lot of it comes down to who we are voting for. This up and coming generation of voters feels very passionately. The goal is that we can take advantage of this momentum and this movement to enact positive, real, tangible change that will save some lives.”

The Vanderbilt Hustler welcomes and encourages readers to engage with content and express opinions through the comment sections on our website and social media platforms. The Hustler reserves the right to remove comments that contain vulgarity, hate speech, personal attacks or that appear to be spam, commercial promotion or impersonation. The comment sections are moderated by our Editor-in-Chief, Rachael Perrotta, and our Social Media Director, Chloe Postlewaite. You can reach them at [email protected] and [email protected]
All The Vanderbilt Hustler picks Reader picks Sort: Newest
Subscribe
Login
1 Comment
Newest
Oldest Most Voted
Inline Feedbacks
View all comments
F
Fair & Balanced

Please also cover the Vanderbilt students who are involved with March for Life.