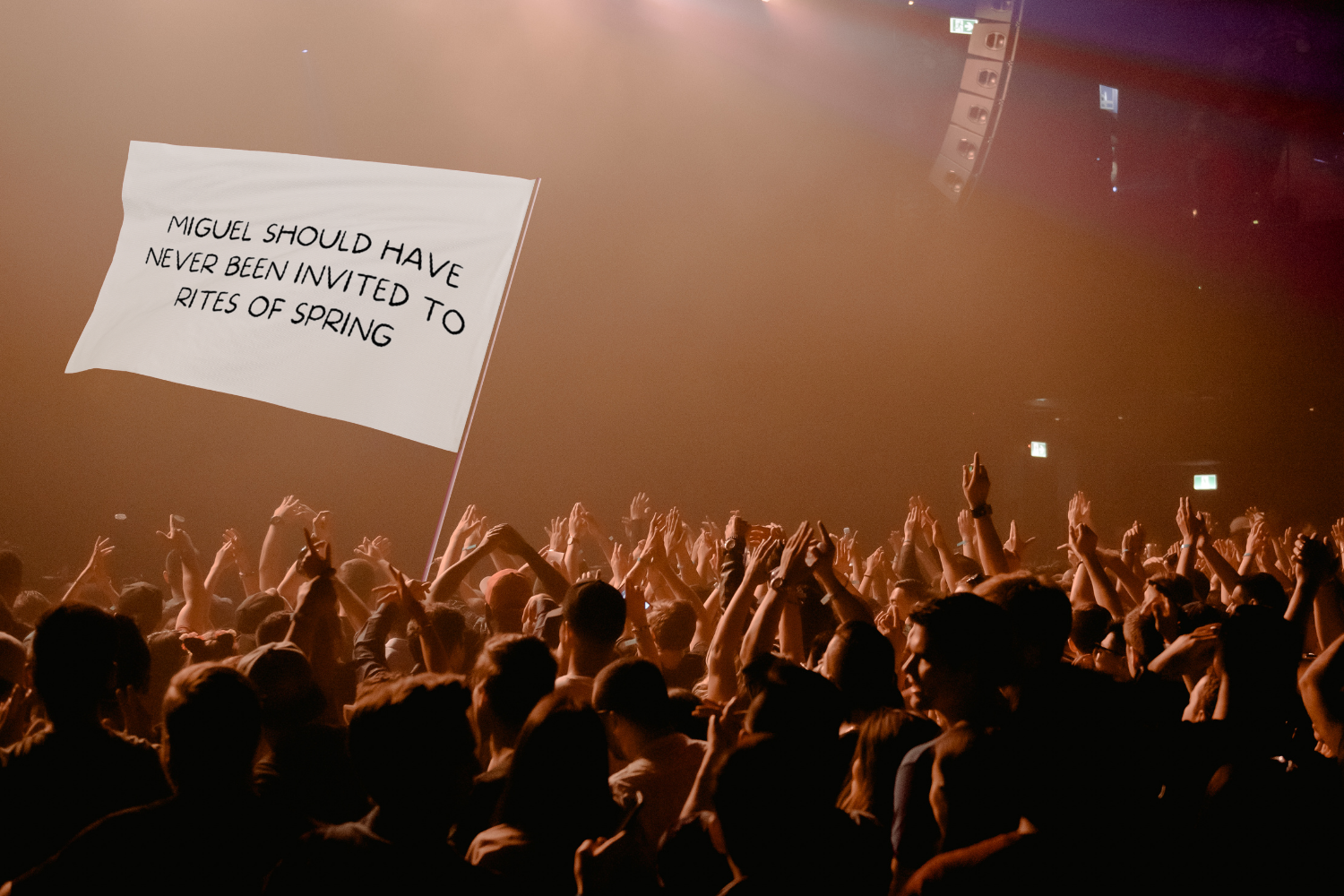 Graphic created on April 21, 2022, depicting a concert crowd holding a flag reading “Miguel should have never been invited to Rites of Spring.” (Hustler Multimedia/Alexa White)

OUNG/PERROTTA: Miguel was accused of sexual assault in 2017. He should have never been invited to Rites of Spring.

Vanderbilt students shouldn’t have to pick between missing one of the biggest events of the school year and supporting someone accused of sexual assault.

Rites of Spring—Vanderbilt’s signature concert series—finally makes its long-awaited in-person return this weekend. With it, students are faced with an unwarranted choice: skip it or indirectly support a man accused of sexual assault.

As two students who entered college during the COVID-19 pandemic, we were both thrilled to see the beloved event back on the university’s calendar. Rites served as the light at the end of the tunnel: not just the end of a grueling semester and academic year, but the end of the pandemic’s hold on our college experience. The end of virtual events, Zoom classes and missed traditions.

Imagine our surprise when we learned that this event was headlined by a man who was accused of sexual assault by a female college student.

Xian Bass alleged that Miguel non-consensually groped her on March 14, 2017, while she was a student at the University of Mexico. In a video and now-deleted Instagram post, she stated that she met the singer at a club and, being a fan of his work, asked to take a selfie with him. She alleged that, after taking the picture, Miguel forcibly put his hand down her shirt and took her breast out of her top.

The caption of Bass’s post captures her shock and rage toward the incident.

“I really don’t understand why you would do that to someone who approached you as a fan. I’m beyond disgusted right now,” the post reads. “Are you used to treating random female strangers this way? Have you gotten away with this in the past?”

“Her story of what transpired is not accurate, and the accusation is unfair and unwarranted,” Miguel said to Vulture.

Bass also filed a police report against Miguel on the night of the alleged incident with the Barstow Police Department, and the Los Angeles Police Department (LAPD) investigated the matter. She later told Spin Magazine that LAPD informed her that they needed more women to come forward to take action against Miguel. The results of the investigation were not released. Even in the statistically unlikely case that Bass fabricated her story, the lack of information surrounding the investigation prevents Rites attendees from knowing the potential implications of going to the concert.

The allegations against Miguel were covered by major news outlets such as Billboard, Vulture and Nylon. The incident received even more attention in 2019 when Miguel headlined the University of Pennsylvania’s 2019 Spring Fling concert, an event similar to Rites. Penn students attended a “Stand Against Miguel at Fling” protest and boycotted the concert itself. Specifically, they objected to Penn’s Social Planning and Events Committee’s choice to book Miguel due to the sexual assault allegations and “misogyny in Miguel’s song lyrics,” such as in the song “How Many Drinks” where Miguel sings, “How many drinks would it take you to leave with me?”

How was this decision made? Why were survivors of sexual assault—and all students—not considered during the process? The website of Vanderbilt Programming Board’s (VPB’s) Music Group, the student organization that plans Rites, does not detail the artist selection process for the event. The university did not respond to our request for comment on the situation and its simultaneous promotion of Sexual Assault Awareness Month and Rites of Spring. One of Music Group’s faculty advisors, Dwayne Elliott, director of arts and campus events, and the organization’s student chairperson similarly did not respond to our outreach. Performing artists and other guests that come to campus are also approved by Associate Provost and Dean of Students G.L. Black, who also didn’t respond to our request for comment.

However this process unfolded, it puts Vanderbilt students and other attendees—many of whom are going to their first-ever Rites—in a deeply unfair bind. We are forced to choose between missing all or part of one of the biggest events of the school year and attending a concert where an artist with inconclusive sexual assault allegations will be performing. There are thousands of other popular musicians without such allegations against them that Music Group could have chosen.

Vanderbilt administrators and student groups should confirm that guests they invite to campus will not endanger the safety or comfort of community members. Why is this standard not included in the university’s brief guidelines for bringing speakers and performers to campus?

When these boundaries are breached in regards to sexual assault, the experiences of survivors of sexual assault are disenfranchised. Furthermore, survivors are potentially ostracized from their peers by choosing not to sacrifice their peace of mind to attend an on-campus event. Although the alleged assault happened five years ago, the time that has passed since the alleged incident does not change the harm that bringing Miguel on campus could have on survivors in our community, especially considering that the issue was never resolved.

It is demeaning and hypocritical of Vanderbilt to publicize the important and difficult work that organizations like Project Safe are doing this month to facilitate discussions about sexual assault while simultaneously promoting a performance by an artist accused of sexual assault.

The prevalence of sexual assault on campus has been brought to light this year. During the first month of the Fall 2021 semester, six sexual assault notices were issued to the Vanderbilt community—double that of the entire 2020-21 academic year. Students who have been subject to sexual assault and harassment at Vanderbilt have begun to tell their stories on social media and through published writing. Many of these sexual assault survivors have cited a lack of transparency and clarity surrounding Vanderbilt’s Title IX reporting and sexual assault disciplinary process. Five more assaults on and near campus were reported between March 14 and 17. Professor Michael Eric Dyson, who was accused of sexual harassment by two former students at Georgetown University and Harvard University, is still employed by the university as of print, despite questions surrounding his harassment investigation. These incidents represent only the tip of the iceberg—only around 20% of sexual assaults are reported.

And now, another potential assailant is being invited to campus on Saturday.

The responsibility shouldn’t be on students to decide whether or not they are comfortable with attending Rites in light of allegations against Miguel.

It’s only natural that after such a difficult past few years, students want to have fun with their friends. Students who choose to go to Rites shouldn’t be scorned, because going to a celebratory event shouldn’t be a point of moral contention.

At the end of her post, Bass gave her reasoning for posting about her alleged experience with Miguel.

“I will not sit in shameful silence and allow sexual assault to be normalized,” Bass writes.

Paying a musician to come to Vanderbilt to headline a music festival is an implicit endorsement of them. By inviting Miguel to Rites of Spring with no mention of the allegations against him during Sexual Assault Awareness Month, Vanderbilt and Music Group perpetuate a culture where victims are discouraged to speak out about their experiences and where sexual assault and harassment are normalized.

The Vanderbilt Hustler welcomes and encourages readers to engage with content and express opinions through the comment sections on our website and social media platforms. The Hustler reserves the right to remove comments that contain vulgarity, hate speech, personal attacks or that appear to be spam, commercial promotion or impersonation. The comment sections are moderated by our Editor-in-Chief, Rachael Perrotta, and our Social Media Director, Chloe Postlewaite. You can reach them at [email protected] and [email protected]
All The Vanderbilt Hustler picks Reader picks Sort: Newest
Subscribe
Login
1 Comment
Newest
Oldest Most Voted
Inline Feedbacks
View all comments
R
Raj Ariga

I find it interesting that you choose to highlight allegation against two black men perpetuating the myth of the black male as a sexual aggressor. Two non African-American women should not be stigmatizing Africans American men,. Did you seek out any African American women to provide input into this matter?