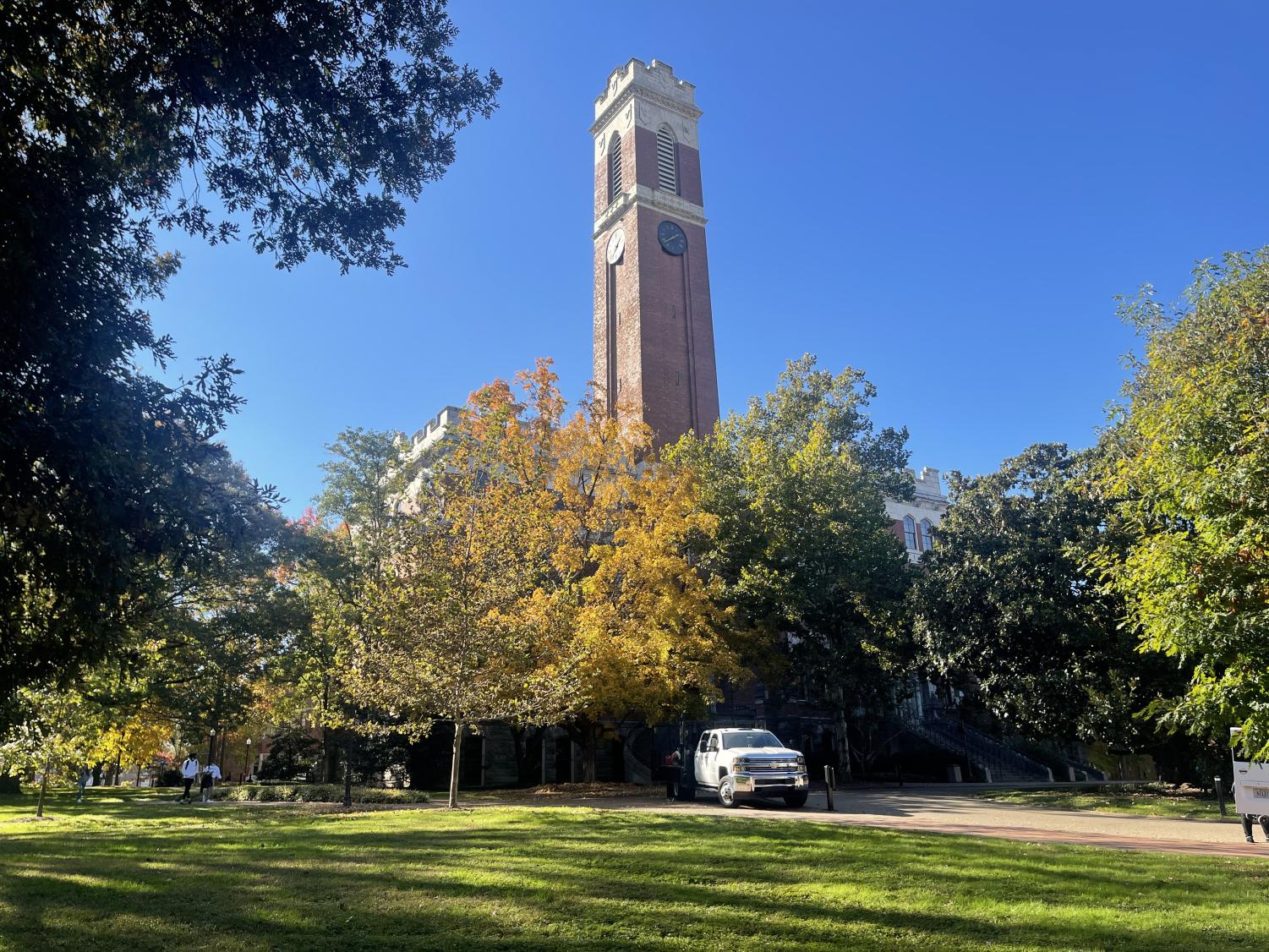 A Georgetown investigation of Dyson’s behavior preceded Vanderbilt's Sept. 28, 2021, announcement regarding his hire.

UPDATED: This piece was updated on Jan. 10, 2022, at 3:52 p.m. CST to reflect additional details regarding Vanderbilt’s course registration system.

Professor Michael Eric Dyson is slated to teach three graduate-level research courses in the Divinity School in Spring 2022, according to Vanderbilt’s course registration system (YES). He was investigated for sexual harassment allegations during his time at Georgetown University, but the results of the investigation were not released, per a Georgetown policy.

Dyson was also scheduled to teach three graduate-level research courses and one teaching assistant practicum at the Divinity School in Fall 2021, per YES. No students appear to be currently enrolled in Dyson’s Spring 2022 courses, nor were any enrolled in the Fall 2021 courses. However, The Hustler confirmed that YES allows graduate students to enroll in the sections. Vanderbilt’s faculty directory lists Dyson’s phone number as zeroes and his office as the currently vacant Kirkland Hall. Dyson did not respond to The Hustler’s request for comment.

A June 1, 2021, Georgetown Voice article reads that Georgetown’s Institutional Diversity, Equity and Affirmative Action Office (IDEAA) engaged in a formal investigation into Dyson’s behavior from February 2020 to mid-September 2020. Vanderbilt made his hire public on Sept. 28, 2020, and he joined the faculty in January 2021.

Dyson is an ordained Baptist minister and author with a Ph.D. in religion. He also writes for The New York Times, and his most recent article is titled “Where Is the Forgiveness and Grace in Cancel Culture?”

Divinity School Dean Emilie Townes and Chair of the Department of AADS Dr. Tracy Sharpley-Whiting did not respond to The Hustler’s multiple requests for comments. The Voice asked Vanderbilt about their knowledge of the Georgetown IDEAA investigation in a May 18, 2021, email obtained by The Hustler.

“We have carefully reviewed the available facts related to this matter. We’re not aware of any previous Title IX investigation involving Professor Dyson,” the statement reads. “The information we have at this time does not warrant any further action by the University.”

A university statement emailed to The Hustler reads that the well-being of the Vanderbilt community is at the forefront of the university’s goals.

“The safety and security of the Vanderbilt community is our utmost concern and we take any reports of faculty, student, or staff misconduct very seriously. When a report of misconduct is made, we take swift and appropriate action to investigate through our established processes,” a university statement emailed to The Hustler reads. “As a rule, we do not comment on the specifics of personnel matters, and do not have any additional information to share at this time.”

In a June 1, 2021, email to The Hustler, Director of the Project Safe Center for Sexual Misconduct Prevention and Response Cara Tuttle Bell said that Project Safe is not involved in investigations for sexual harassment allegations.

According to the Voice article, a female student in one of Dyson’s Fall 2019 Georgetown classes said he repeatedly attempted to establish an off-campus relationship with her. The Voice reports that Dyson did not teach any classes at Georgetown in 2020, however, the Voice reported that the cause for this gap is unknown. Under 34 C.F.R. §§ 106.44(c)-(d), schools can place non-student employee respondents on administrative leave or remove them in the case of an emergency while a Title IX grievance process ensues.

“The student alleged repeated private dinner invitations off campus, personal text messages, and incidents of unwanted physical touch and proximity—including invasions of personal space and an instance of Dyson massaging the student in class,” the article reads. “When she offered to meet Dyson during office hours instead, according to the student, he insisted on private conversations outside an academic setting.”

Stony Brook University professor Crystal Fleming separately alleged to the Voice and publicly on Twitter that Dyson had sexually harassed her when she was a graduate student at Harvard University and he was a professor at the University of Pennsylvania (UPenn). Dyson was part of UPenn’s faculty between 2002 and 2007.

In an Oct. 17, 2017, Twitter thread, Fleming recounts that she allegedly met with Dyson to discuss her research. She posted that Dyson flirted with her during their in-person meet-up and that his behavior was “contemptible.” Fleming said in an email to The Hustler that she was not interested in speaking further about this matter.

“I remember the feeling of disappointment and even shame as the realization of why he asked to meet dawned on me. It just blew my mind that a ‘famous’ married professor would so brazenly proposition me — a grad student several decades his junior and that he would use ‘interest in my work’ as a pretense for making an unambiguous, and unwanted, sexual advance,” Fleming’s tweets read. “His responses, though, made it clear that any ‘career help’ he would have provided would have been conditioned on my sexual subordination.”

Madison Edwards (‘21) wrote an op-ed for the Vanderbilt chapter of Her Campus on Feb. 26, 2021, titled “Why Does Vanderbilt Continue to Fail Black Women,” in which she details the allegations against Dyson and her reaction to them. She writes that his hiring at Vanderbilt has caused her to fear for herself and other Black female students at Vanderbilt.

“I question the Vanderbilt Administration for allowing somebody like Michael Eric Dyson to work on our campus and with students. Do they truly care about our safety, or was this done for boosting Vanderbilt’s prestige?” Edwards writes in the piece. “Vanderbilt cannot deny what Michael Eric Dyson has been accused of doing. If I, a student, can find out about these atrocities, there is no way their hiring committee could not.”

On May 1, 2021, junior Nikki Aminmadani similarly wrote an op-ed for the Vanderbilt Political Review titled “Vanderbilt has Failed to be an Ally to the #MeToo Movement.” In it, she asserts that Vanderbilt’s hiring of Dyson is a “misaligned prioritization of campus safety.”

“Vanderbilt is putting women students, postdocs, and faculty in danger with this hire. Not only is it leaving women vulnerable to abuse and harassment, but it also discourages victims who currently may be trying to come forward with accusations,” Aminmadani’s article reads. “Vanderbilt’s silence in addressing these allegations is in and of itself an act of violence against women, especially women of color.”

Members of Georgetown’s Black Survivors’ Coalition (BSC) brought allegations of Dyson’s alleged sexual misconduct to Georgetown’s attention during a February 2020 sit-in outside the office of Georgetown President John DeGiola. A video of the sit-in shows a member of the BSC naming Dyson as a predator to the Black community.

The Vanderbilt Hustler welcomes and encourages readers to engage with content and express opinions through the comments section on our website and social media platforms. However, The Hustler reserves the right to remove comments that violate the outlined policy. Comments which contain vulgarity, hate speech, personal attacks or appear to be spam or commercial promotion will be blocked or removed by The Hustler. The comments section, both on the website and social media, is moderated by the Editor in Chief.
All The Vanderbilt Hustler Picks Reader Picks Sort: Newest
Subscribe
Login
1 Comment
Newest
Oldest Most Voted
Inline Feedbacks
View all comments
R
Randy Lahey

Aren’t those courses automatically generated for professors whether they’re actually teaching or not? It seems like he isn’t slated to teach at all in the spring if nobody is enrolled.