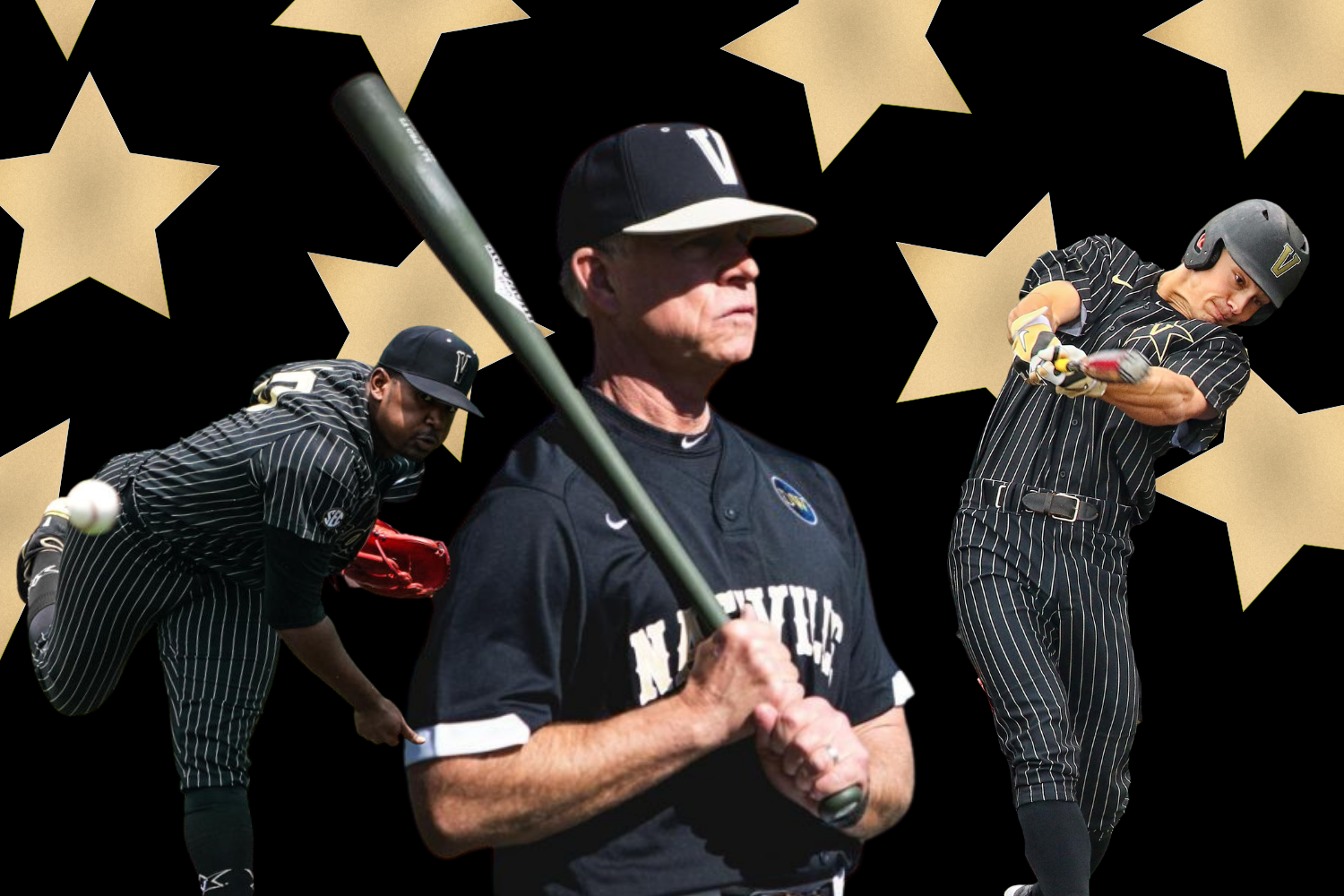 In honor of Tim Corbin’s 20th season at Vanderbilt, The Hustler Sports Staff takes a look back at some of the best players of his tenure with our second edition of his all-time team.

It’s week two of The Hustler’s celebration of VandyBoys skipper Tim Corbin’s 20th season on West End, which means it’s time for our second edition of Corbin’s all-time roster. If you didn’t tune in to last week’s Gold edition, here is a brief overview of our process.

In order to celebrate Corbin’s tenure, we took a stab at choosing some of his all-time best players. But choosing just one player at every position was simply too hard. So we created a pair of rosters featuring some of the best players of his tenure based on their performance at Vanderbilt. The process began by choosing the two best players at every infield position, the six best outfielders and six best pitchers. Players were assigned a single position regardless of whether they played multiple positions during their Vanderbilt careers. Within each position group, a player was randomly assigned to either the Gold or the Black team, leaving us with two full squads behind three starting pitchers.

Last week we released the Gold team—led by Dansby Swanson and David Price. Pitted against the Gold team will be the Black team, which is found below and led by Kumar Rocker and Bryan Reynolds. With both rosters now released, we leave it to you to be the judge: who would win a three-game series? And, more importantly, who did we miss?

The Black team’s rotation features Kumar Rocker, Carson Fulmer and Walker Buehler—a trio of College World Series champions. Outside of Price, Fulmer is perhaps Vanderbilt’s most decorated pitcher, with a 24-3 record and a winning percentage of .889, the best in Vanderbilt history. He ranks second in career ERA at 1.99, sixth all-time in strikeouts with 313, won the SEC’s Pitcher of the Year award in 2015 and was later selected eighth overall in the MLB Draft by the Chicago White Sox.

His former teammate Buehler finished seventh all-time in career ERA with a 2.87 and went 12-2 in 2014 when the Commodores won their first College World Series. He cemented his legacy with a complete game against Oregon in the Nashville Regional title game to send Vanderbilt to Omaha that year. He was later selected second overall by his current team, the Los Angeles Dodgers.

Rocker finished his three seasons on West End with two College World Series appearances, a postseason no-hitter and a College World Series Most Outstanding Player award to his name. The Georgia native tied a Vanderbilt record for wins in a season with 14 in 2021 and ranks third all-time in total wins with 28. He was selected 10th overall by the New York Mets in the 2021 draft, but did not sign with the team.

In his four-year career as a Commodore, Ty Duvall boasted consistently impressive performances both at the plate and behind it. In the 127 games in which he saw action, Duvall recorded just three errors, one in each of his three seasons, and none in the shortened 2020 season. Arguably even more impressive, he allowed just nine passed balls during his time at Vanderbilt. At the plate, Duvall was a consistent and reliable batter, maintaining a rather steady batting average in the three years in which he played a significant role on the team.

With a career batting average of .284 and impressive career OPS of .840, Duvall was an offensive threat, further supported by a career on-base percentage of .423. Duvall signed as a free agent with the Seattle Mariners following the shortened 2020 season, and remains active with the Modesto Nuts, the low-A affiliate of the Seattle Mariners.

Julian Infante left Vanderbilt three years ago, but his presence on West End will never be forgotten. In his 197 games for the VandyBoys, he notched 178 hits, 118 runs, 31 home runs and posted a batting average of .256. However, what made Infante most impressive was his ability to elevate his performance in the postseason. During the 2019 NCAA Nashville Regional, he held a .500 batting average, posted five RBIs, scored four runs and was honored as the NCAA Nashville Regional MVP. He also tied an NCAA Tournament record by notching three doubles in a game against Indiana State. The Florida native’s impressive Vanderbilt tenure led him to be selected by the Miami Marlins in the 36th round of the 2019 draft. Commodore fans remember Infante for his locker room presence, and so does Corbin, as he said, “If there was a definition of great teammate, Julian would be attached to it.”

SEC Freshman of the Year, First-Team All-SEC as a freshman, SEC Player of the Year, American Baseball Coaches Association (ABCA) First-Team All-American—you get the picture. Tony Kemp’s list of individual accolades and achievements rivals that of any other standout in Corbin’s tenure, and Kemp’s teams also found success during his time on West End. His 2011 squad was the first Vanderbilt side to ever reach a College World Series.

Unfortunately, the outfielder turned second baseman departed a year before the Commodores’ first title, but he does have an MLB World Series ring from the 2017 Houston Astros to fill this empty spot in his trophy case. Kemp batted an insane .391 with six triples and 34 stolen bases in his final year at Vanderbilt, leading to a fifth-round selection by the Astros in the 2013 MLB Draft. He now plays for the Oakland Athletics, where in 2021 he batted .279 over 330 at-bats. Kemp helped to usher in an era of sustained VandyBoys success and will forever be one of the best players to grace Hawkins Field.

During his time at Vanderbilt, Jason Esposito was a reliable hitter and good defensive third baseman who is known for his big-game performances for the Commodores. Esposito started every game in all three of his seasons on West End, making 196 appearances for Corbin and Vanderbilt. The third baseman earned All-Regional honors in three NCAA Tournaments, winning MVP in his final regional, and was a cornerstone on Vanderbilt’s first team to make the College World Series in 2011. He finished his Vanderbilt career with a .330/.405/.514 slash line and was a more-than-reliable player for three seasons. Following his Vanderbilt career, Esposito was selected by the Orioles in Round 3 of the 2011 MLB Draft.

Ryan Flaherty was one of the most consistent infielders of the Corbin era. In each of his three seasons with the team, he slashed above .320, drove in at least 40 runs and missed no more than three games. Flaherty wasted little time making his mark in Nashville, playing in 62 games and leading the team in batting average as a first-year. The following year, his .969 fielding percentage and .381 batting average helped boost the Commodores to their third-ever SEC Tournament championship. Perhaps more impressive was the fact that he ended the season with a 35-game hit streak, the longest in school history. In a junior year in which he had little more to prove, Flaherty displayed refined strength and power, the only facet of his game that had been lacking, leading the team in home runs with 14. He was ultimately drafted 41st overall in 2008 by the Chicago Cubs and went on to play eight seasons in the MLB.

Mike Yastrzemski elected to go to Vanderbilt instead of entering the MLB draft out of high school in 2009, and it paid off. In his freshman season, he posted a .260 batting average and finished with 11 extra-base hits. Throughout his sophomore year, he continued to produce and develop as a player— appearing in several high-stakes games such as the 2011 College World Series—and made many timely plays throughout the season. It was in his junior and senior years that he really took off, though. Yastrzemski was selected to the 2012 SEC All-Tournament Team before receiving First-Team All-SEC, SEC All-Defensive Team, NCBWA Third-Team All-American and ABCA Second-Team All-South Region honors.

Chosen by the Baltimore Orioles in the 14th round of the 2013 MLB Draft, Yastrzemski spent six years in the minor leagues before being promoted to the majors in 2019. For the past three seasons, Yastrzemski has played with the San Francisco Giants, and in 2021, he was one of the final three candidates for a National League Gold Glove Award in right field.

Before Vanderbilt was widely recognized as a national baseball powerhouse, the 2007 Commodores put the program on the map with a season for the ages. Although mid-2000s stars David Price and Pedro Alvarez are much celebrated amongst Vanderbilt fans, oft-overlooked outfielder Dominic de la Osa was just as integral in Vanderbilt’s breakout. De la Osa bounced around from shortstop to left field in his first two seasons, but still started 111 games and put forth strong batting and fielding numbers. In his junior year, he found a permanent home in left field and proceeded to explode offensively with a .378 batting average, 20 home runs and 20 steals in 64 games.

In that legendary 2007 season, de la Osa was named a First-Team All-American as Vanderbilt cruised to a 54-13 record—at the time, the best in program history. Despite being drafted in the 10th round of the 2007 MLB Draft by the Detroit Tigers, de la Osa returned for his senior season and continued to dominate at the plate. A rare four-year starter for the VandyBoys, de la Osa is still Vanderbilt’s career-leader in hits (300), at-bats (941), total bases (515) and RBIs (188).

Brentwood native Bryan Reynolds broke into the VandyBoys starting lineup in his freshman year, when he was one of just three Commodores to play all 72 games on the way to Vanderbilt’s 2014 College World Series title. He batted over .300 in all three of his seasons, including hitting for more power in his junior year, in which he hit 13 home runs with a 1.064 OPS. After his stellar three-year career with the VandyBoys, Reynolds was picked in the second round of the 2016 MLB Draft by San Francisco.

Reynolds made his major-league debut in 2019 for the Pittsburgh Pirates, and is now arguably the most exciting player on the team. He batted over .300 in both 2019 and 2021 and is coming off his first career All-Star Game appearance. Bryan Reynolds was an exciting staple of the VandyBoys from 2014-2016, and seems to still have the best years of his career ahead of him.

Austin Martin never settled into a single position in Corbin’s lineups, which made the designated hitter position a perfect spot to slot in one of Vanderbilt’s best contact hitters of all-time. While his career was cut short by COVID-19 and his eventual high draft selection, Martin’s name will forever be mentioned when discussing Vanderbilt’s 2019 College World Series. A member of every All-Freshman team you can think of during his first year, Martin recorded a hit in 47 of the 58 games he appeared in. He finished the season on a 10-game hitting streak and led the SEC with 22 stolen bases as well. His play didn’t dwindle once the postseason came around, either, as he led the Commodores with a remarkable .385 average in the 2018 NCAA Tournament before taking off his sophomore year. He was a Golden Spikes Award semifinalist in year two behind a .392 batting average, which he elevated to .424 against SEC opponents. He reached base in 37 consecutive games at one time in 2019 and set the program’s single-season record for runs scored with 87. His two home runs against Louisville in the College World Series stand out, and he was later selected fifth overall by the Toronto Blue Jays in the 2020 draft.