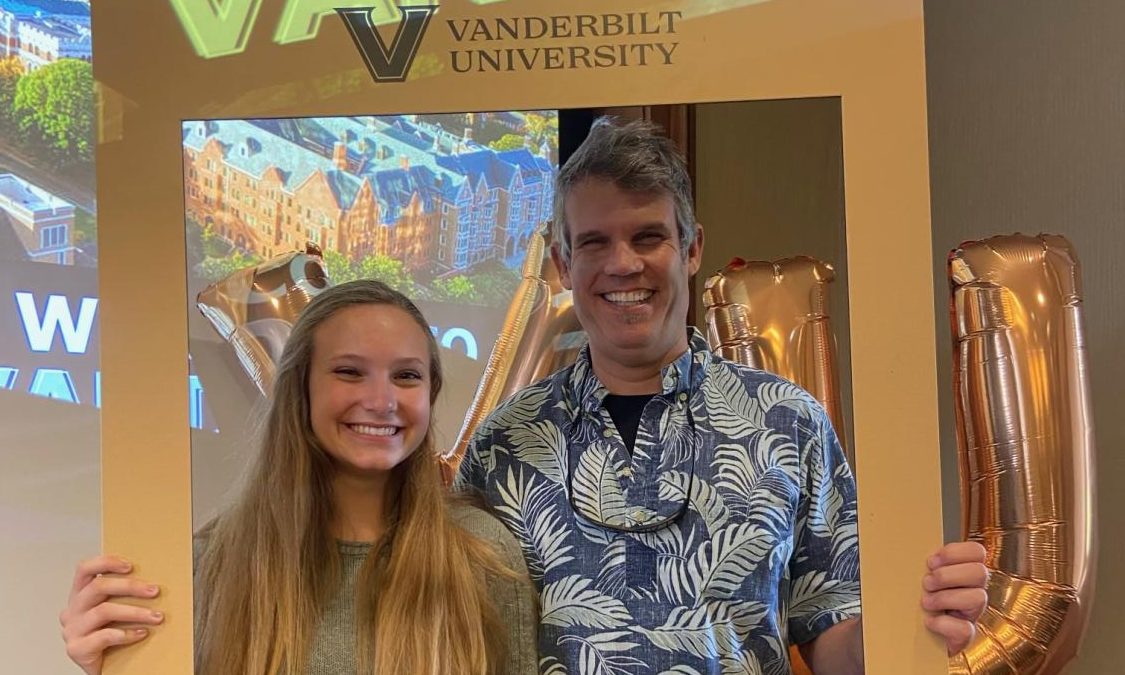 Ella Parsons and her father at an admitted students event on April 15, 2022. (Photo courtesy of Ella Parsons) (Ella Parsons)

Ella Parsons and her father at an admitted students event on April 15, 2022. (Photo courtesy of Ella Parsons)

Vanderbilt released its regular decision (RD) results on March 28 and admitted 4.7% of applicants—a record low. The university also boasted its lowest overall acceptance rate in history, accepting 6.1% of applicants to the Class of 2026.

All admitted students were invited to campus on April 11 for Anchor Day—an all-day event that featured tours, speeches from university figures, such as Chancellor Daniel Diermeier, student speaker panels, food trucks and other activities. Admitted students were also able to participate in virtual admitted students’ events as well as panels. Students admitted via RD have until May 1 to decide whether to commit to Vanderbilt.

“If someone thinks ‘I should apply early because it will be easier [by] looking at the admit rate, that would be a falsehood,” Christiansen said.

Admission statistics for the Class of 2026 reflect a larger downward trend in Vanderbilt’s RD and overall acceptance rates. Notably, 5.5% of RD applicants and 6.7% of all applicants were accepted to the Class of 2025—rates that both set university records at the time.

Christiansen emphasized that as admission to Vanderbilt becomes more selective, its reputation builds. Yet, he said Vanderbilt’s holistic admissions process allows students to “shine,” even amid this competition.

“It’s really about, what are they [the applicants] doing as a human being? What are they doing with their time that is making a difference, and how will that translate into being a good citizen here at Vanderbilt?” Christiansen said. “Yes, it’s competitive, but I would not want someone to think they shouldn’t apply because it is not a formulaic approach.”

He said prospective students should not be intimidated by Vanderbilt’s admission statistics given that a university’s acceptance rate is simply a function of the number of applications it receives. This year, Vanderbilt received 46,717 applications, reflecting a slight decrease from last year’s pool of 47,174 students.

“[It’s] an admit rate, not a selectivity rate,” Christiansen said.

“They are very academically accomplished in all facets—rigor of curriculum, types of courses they’ve taken, the grades in those courses, their testing,” Christiansen said. “But I am even more impressed with what they’ve done in leadership and extracurricular activities, particularly during COVID-19. There are lots of things in our world today that are not very positive, and this class gives me hope. We have great students coming in; they’re concerned about the world they live in.”

The middle 50% range of test scores for the ED and RD pools were nearly identical, according to the press releases. The RD cycle range was 10 points higher than that of the ED cycle on both the SAT Math (770-800) and Evidence-Based Reading and Writing (740-770) exams. Similarly, the middle 50% range of ACT scores (34-36) in the RD pool was one point higher than that of the ED pool.

Christiansen explained that Vanderbilt has a “robust” waitlist in each of its undergraduate schools. Students are taken off the waitlist relative to the enrollment caps of the school to which they applied.

Christiansen attested that applicants who were waitlisted are still “in the running” and should feel as though they have a realistic chance of being admitted off the waitlist.

“The students on the waitlist today are like the students who got the Cornelius Vanderbilt scholarship four years ago,” Christiansen said. “These are phenomenal students.”

Christiansen said Vanderbilt’s overall acceptance rate would likely rise “in the 6[%] range” once the university completes its waitlist process toward the middle of this summer. Per Christiansen, around 7-8% of each incoming class is composed of students who were initially waitlisted. The exact numbers of how many students need to be admitted off the waitlist this year will not be known until early May.

For the first time in history, Vanderbilt deferred some ED applicants to the RD pool this year, a process Christiansen said was effective. Per Christiansen, a “small number” of applicants were deferred, with a “solid portion” of that group being admitted via RD. Christiansen emphasized the Office of Undergraduate Admissions’ purposeful intent in the deferral process to give students a realistic perspective of their college options.

“If anything, we could defer more [in the future],” Christiansen said.

Isabella Bautista, an incoming member of the Class of 2026, was deferred from the EDII pool and accepted via RD. She intends to major in mathematics on the pre-med track.

“I know that, in general, the rate of people who get accepted after getting deferred for early decision isn’t very high, so I wasn’t really expecting anything when opening my decision,” Bautista said. “I thought it [her acceptance] was a mistake at first.”

Being from Easton, Pennsylvania, Bautista said she is excited about the “culture shock” of moving to Nashville.

“I’m looking forward to getting pushed out of my comfort zone,” Bautista said. “Nashville is such a unique place … [It] is really the place to be for young people who are looking to do something in medicine, music or anything like that; it’s really a hub.”

Vanderbilt’s acceptance rates are comparable to that of the five schools ranked closest to it on the 2022 U.S. News Best National University Rankings. The university is currently tied at No. 14 with Brown University and Washington University in St. Louis (WashU). Dartmouth College is ranked 12, and Rice University and Cornell University share the No. 17 spot.

Among these schools, Vanderbilt had the second-lowest overall acceptance rate for the Class of 2026—only trailing Brown, which only accepted 5% of applicants this year. Vanderbilt’s ED and RD acceptance rates sit in the middle of those of the aforementioned institutions, with its ED rate being 3.57% different on average and its RD rate being 1.23% different on average.

WashU and Cornell both will not release their admissions statistics until mid-summer.

Emma Williams, an incoming first-year from Tulsa, Oklahoma, already committed to Vanderbilt after being admitted thorugh RD via the MOSAIC program, a multicultural student recruitment program. She plans to major in philosophy with a potential environment-focused double major on the pre-law track. For Williams, the combination of Vanderbilt’s financial aid practices, location in Nashville and student community propelled her to choose Vanderbilt over other top schools.

“The way that students talked about Vanderbilt, they seemed like they really loved it, and they were excited to be there,” Williams said.

Shreyas Padamatinti, an Atlanta, Georgia, native who plans to major in Human and Organizational Development if he commits to Vanderbilt, said he received his decision while teaching a squash lesson. After seeing that he had been accepted, he said he celebrated with his family and friends.

“It was such an exciting day,” Padamatinti said. “It’ll probably always be something I remember—getting into such an elite school.”

Padamatinti stated that he is “strongly leaning toward” committing to Vanderbilt in the coming weeks. In the event that he attends Vanderbilt, he said he is most excited about living in a new city, meeting new people and playing for Vanderbilt’s club squash team.

Ella Parsons, who was accepted to the Class of 2026 from the RD pool, also said she is “seriously considering” attending Vanderbilt and plans to major in mathematics with a potential double-major in Peabody College if she commits.

“I was like, ‘this can’t be happening,’” Parsons said. “I hadn’t really considered Vanderbilt as an option—it was one of my reach schools.”

Similar to Williams and Padamatinti, Parsons explained that she was drawn to Vanderbilt’s location in Nashville—a drastically different culture than her hometown of Kaua’i, Hawai’i. Specifically, she mentioned how Nashville is both known as Music City and a foodie city.

“We don’t get many concerts at all [in Hawai’i],” Parsons said.

Alice Huh, an incoming first-year, said she began to cry when she opened her Vanderbilt acceptance letter. Hailing from Suwanee, Georgia, she stated that Vanderbilt’s collaborative and friendly environment appealed to her. While at Anchor Day, she said this energy shined through both via current students and other incoming and prospective members of the Class of 2026.

“For a lot of other top schools, I hear so much about how everyone’s always pitted against each other,” Huh said.

The Vanderbilt Hustler welcomes and encourages readers to engage with content and express opinions through the comment sections on our website and social media platforms. The Hustler reserves the right to remove comments that contain vulgarity, hate speech, personal attacks or that appear to be spam, commercial promotion or impersonation. The comment sections are moderated by our Editor-in-Chief, Rachael Perrotta, and our Social Media Director, Chloe Postlewaite. You can reach them at [email protected] and [email protected]
All The Vanderbilt Hustler picks Reader picks Sort: Newest
Subscribe
Login
5 Comments
Newest
Oldest Most Voted
Inline Feedbacks
View all comments
M
Mr. Salt

Hi! Sorry about the confusion–that was an error on our part. The EDI acceptance rate for the Class of 2026 was 24.1%.

Um… so were all the classes before 2026 just disappointments to ya’ll? Y’all need to fix the wording on this headline and in the article.

Why do you still report this? It’s the same news every year.