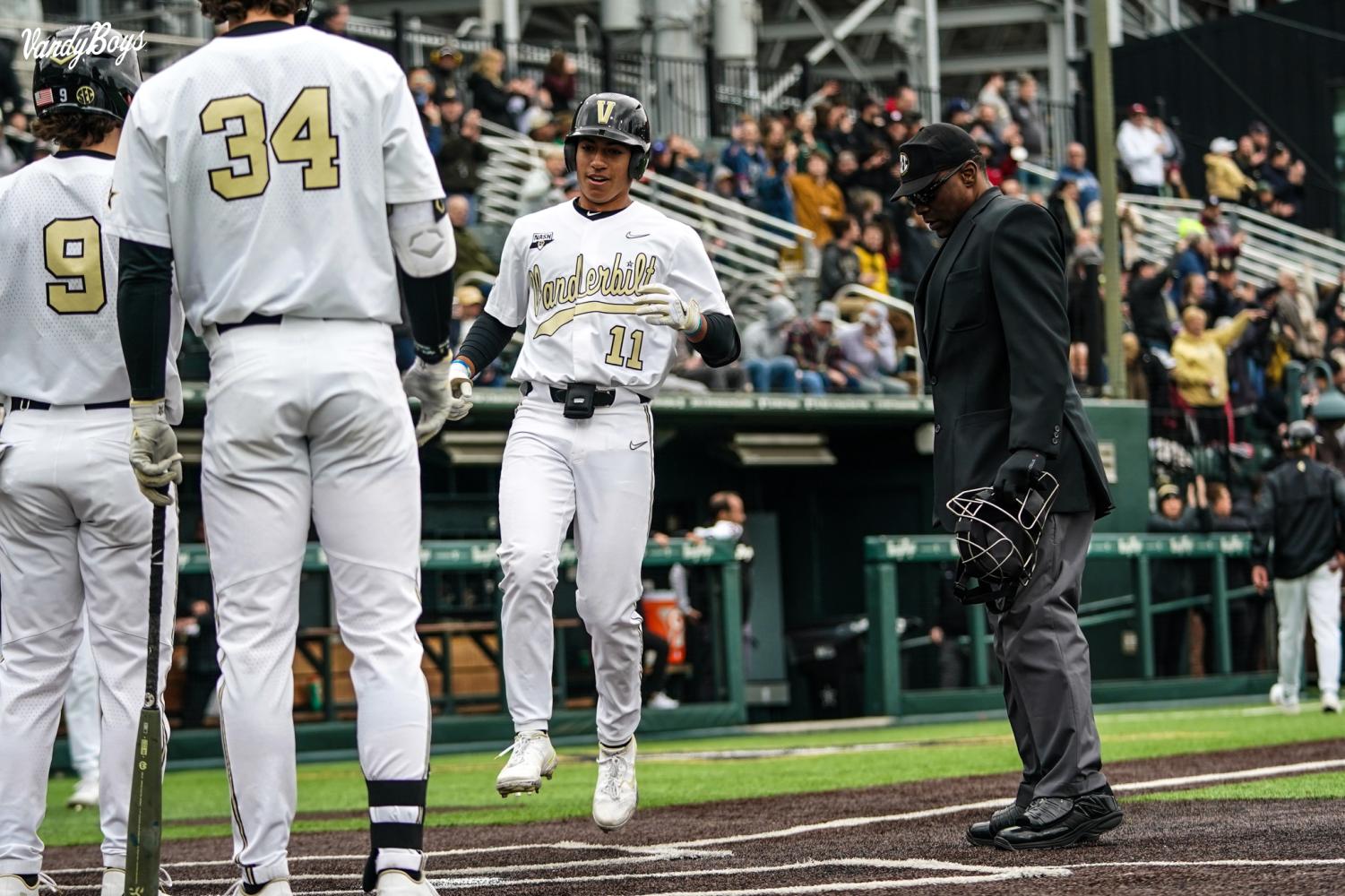 Freshman Davis Diaz steps on home plate after the first home run of his career on March 19, 2022. (Vanderbilt Athletics)

After passing up an offer from the Arizona Diamondbacks last summer, Davis Diaz has taken Division I baseball by storm.

On July 12, Davis Diaz received news that he had been selected in the 12th round of the MLB draft by the Arizona Diamondbacks. There was just one problem: He had already committed to play baseball at Vanderbilt.

As the 71st-rated prospect in the nation, it was not surprising that the Diamondbacks took a chance on the infielder from California despite his commitment to Vanderbilt. With the opportunity to jump straight to the MLB on the table, Diaz consulted friends who had faced the same dilemma. After discussing it with them and his family, he eventually reached his decision: Vanderbilt was an opportunity that he couldn’t forgo.

For Diaz, Vanderbilt is just the next stage in what has been a lifelong relationship with baseball. Growing up with a dad and two brothers who shared a passion for the game, he was always surrounded by a bat, glove or ball. When he turned three years old, his parents signed him up for tee-ball; from that point on, there was no looking back.

“My dad grew up playing baseball, and both my older brothers grew up playing. So ever since I was born, I was pretty much forced to just go to their games,” Diaz said. “[Through that] I just kind of found a love for it and I’ve been playing since.”

Despite countless hours of practice and many seasons of travel, club and eventually high school baseball, Diaz never worried about the future or where the game would ultimately take him.

“I always just kind of played it because it was the most fun thing to do,” Diaz said. “I loved going out there and meeting new guys and just playing.”

The joy Diaz got from the game translated to lots of time on the ballfield, and halfway through his first season at Vanderbilt, it’s paying off. The first-year third baseman has been one of the most consistent bats in the Commodores lineup this year. After a somewhat slow start, Diaz broke out against Hawai’i in early March, going 9-for-16 with three doubles in four games against the Rainbow Warriors and winning SEC Freshman of the Week as a result. He has stayed steady since and is slashing an impressive .302 with 17 RBIs on the year.

“That’s the kind of kid he is,” head coach Tim Corbin said of Diaz. “He’s just really consistent in everything that he does.”

Perhaps the most impressive aspect of Diaz’s approach at the plate has been his eye. It’s not uncommon for true freshmen to take time to adjust to Division I pitching, with low walk rates and high strikeout numbers often coming as a result. Diaz has faced no such problems, leading the team with 22 walks and striking out just 14 times in his 29 games this year. He credits his solid eye to his batting practice pitcher back home: his dad.

“When my dad throws [batting practice], it’s all over the place, so I’ve been able to learn a good eye from that,” Diaz said. “But it’s just doing whatever I can to touch first base and just keeping the line moving with our team and having those guys do their thing after that.”

Diaz has also been one of the most reliable defenders in the Commodore infield, making just two errors while manning one of the most difficult positions on the field in third base. He has already compiled quite the highlight tape of diving stops and barehanded throws in his young career.

“He’s fun to hit ground balls to,” Corbin said. “The ball doesn’t fall out of his glove.”

Diaz’s defensive prowess at the hot corner has been a pleasant surprise for the VandyBoys, given that he was initially recruited as a shortstop. Though Diaz had played the position from time to time during summer ball, third base was never his primary position. But thanks to the help of his coaches and teammates, the transition has been smooth and seamless.

“I’m still learning the process and learning from some of our older guys who’ve had experience at third,” Diaz said. “But I love it. Whatever I can do to help in any sort of way, I’ll do it.”

The mentorship that Diaz has received at third is something that he found to be forthcoming in all aspects of life as a Vanderbilt baseball player. Whether it be from Corbin or upperclassmen teammates, he said this support has played a big role in his development both as a player and as a person.

“The second day we got here, [seniors Tate Kolwyck and Dominic Keegan] had a meeting with all the freshmen, and they answered any questions we had and told us what to expect,” Diaz said. “They’re not only mentoring us with baseball, but with school and the social life here, too.”

Socially, Diaz believes the bonds and connections he has formed with his teammates have had a significant part in his and the team’s success. A four-year member of his high school’s honor roll, Diaz knows the importance of academics and staying on top of his work.

“My parents always said, ‘Academics come first and baseball comes second.’ They said, ‘A degree can last forever but baseball is going to end at some point,’” Diaz explained. “They really instilled that mentality in me and, without academics, there would be no baseball.”

Both his attention to academics and the relationships he has formed at Vanderbilt will play an important role in Diaz’s journey to achieve his goal of playing in MLB. But, for now, Diaz is just taking things one day at a time.

“Corbs tells us how fast the season goes—you blink your eyes and all of a sudden you’re at the end of the year,” Diaz said. “We’re all just trying to take it all in and enjoy the little moments we have with each other.”