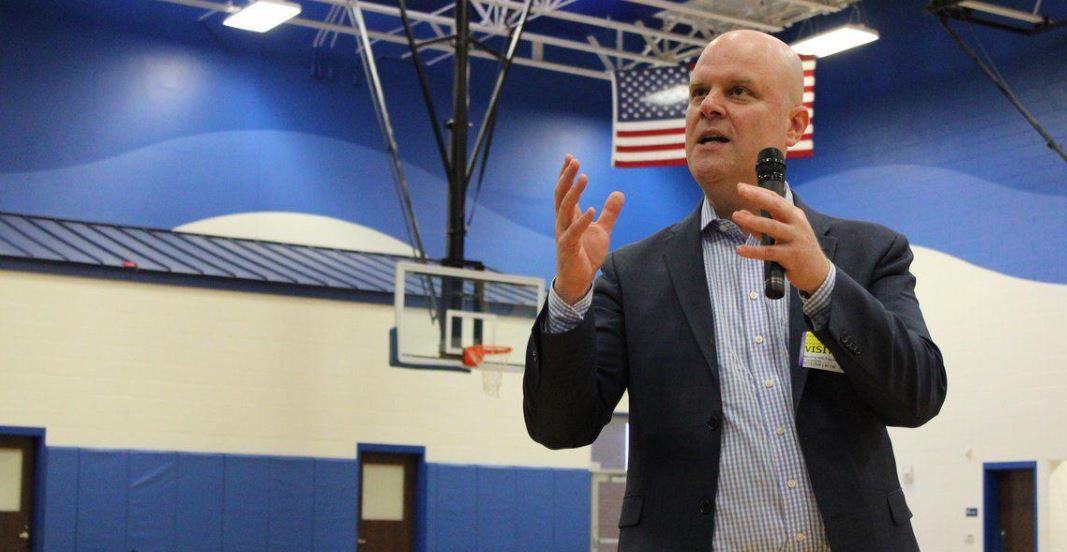 A Vanderbilt graduate, Maraniss has become a key figure in helping the athletic department explore the intersection of sports and society.

The Fred Russell-Grantland Rice Scholarship was first awarded by Vanderbilt University in 1956, in honor of the two sportswriting giants. For the past 60 years, it has given talented student journalists from all over the country the opportunity to study at Vanderbilt. In 1988, Vanderbilt Athletics Special Project Coordinator Andrew Maraniss (‘92) was fortunate enough to join a fraternity of award winners that already included Skip Bayless (‘74) and Roy Blount Jr. (‘63) and would soon include Lee Jenkins (‘99), Tyler Kepner (‘97) and more.

“Winning that scholarship was the best thing that ever happened to me and it changed the whole course of my life,” Maraniss said.

It was this award that brought Maraniss to Nashville and set him on the path he is on today, now working alongside Candice Storey Lee and other Vanderbilt Athletics leadership.

Maraniss’ current position is actually the second job he has had at Vanderbilt. He worked for the men’s basketball team as media relations director from 1992 to 1997, starting right after he graduated with a degree in American History.

Maraniss was hired for his dream job in 1998: working in Major League Baseball. He would spend the next year as the Tampa Bay Devil Rays media relations manager during their inaugural season.

“But pretty quickly, I realized that my dream job wasn’t what I hoped it would be and I think that happens to a lot of students,” Maraniss said.

After a year, Maraniss then returned to Nashville to work for McNeely Pigott & Fox Public Relations, where he later became a partner. Amidst his successful career, Maraniss began to realize that he wanted to reconnect with his past.

“Eventually, I started to kind of miss sports,” he said.

This realization led him to begin working on his first book, “Strong Inside: Perry Wallace and the Collision of Race and Sports in the South,” based on the Vanderbilt basketball legend who became the first Black varsity basketball player in the SEC.

“I had written a paper about Perry Wallace when I was a student here at Vanderbilt for an African American history class and it was my favorite project that I did as a student by far,” he said. “I started thinking about it, that Perry deserved to have a book written about him. It would be as if there had never been a book about Jackie Robinson or Roberto Clemente.”

Despite not needing Wallace’s permission to write the book, Maraniss reached out to him to gauge his interest in participating. Wallace agreed and gave Maraniss his blessing to write about his life.

“I started the next day and I had no idea how long it would take to write a book. I thought a couple years, it ended up taking me eight years,” Maraniss said. “So I spent four years just on the research and four years on the writing.”

It was throughout the process of writing the book that Maraniss was brought back to Vanderbilt’s campus. This put him back in contact with the school’s athletic department and its then-athletic director David Williams II, who was also interested in honoring Wallace’s legacy.

“[Williams] was working hard to make sure that Perry Wallace and his contributions were properly acknowledged,” Vanderbilt athletic director Candice Storey Lee said. “The ‘Strong Inside’ book was a big part, of course. [Maraniss] was involved and around all that.”

As the relationship between Maraniss and the athletic department developed, Williams approached him about joining their team, specifically to help establish a Sports & Society initiative.

“It would look at issues related to race and sports, gender and sports, sports and politics, all of which I found really interesting,” said Maraniss. “So that’s when I decided to come back to Vanderbilt to help him start the Sports & Society initiative here.”

When Maraniss was a child, his Brooklynite grandfather would tell him about Jackie Robinson, the racism Robinson endured, and his impact on sports and on society.

Maraniss’ father, author and journalist David Maraniss, would tell him about his favorite baseball player—Roberto Clemente—and Clemente’s experience playing in the MLB, as well as his humanitarian efforts.

“Sports are so visible and they’re so accessible,” he said. “I think people are drawn to those stories because they think that they can handle it–‘I can read a story about a basketball player or a baseball player’–and then it opens up a whole larger world.”

As he learned about the intersection of race and sports from his family, Maraniss grew up in Washington D.C., as a fan of John Thompson’s Georgetown basketball squads in the 1980s. Following those teams, Maraniss was able to see firsthand the racism the coach and team had to endure and contextualize the lessons he had learned. He later turned experiences like this and the messages of his father and grandfather into his career.

Maraniss officially joined the Vanderbilt athletic department in 2017, and mostly worked under Williams initially. In his first year, he helped develop a calendar of events called ‘Examining the Olympics from Diverse Angles,’ which featured authors and journalists from around the country who looked at the Olympics from an honest angle.

“[Maraniss] is a gem,” Lee said. “Everybody just wanted to figure out how to formalize a relationship with him [when he started]; that just speaks to who he is.”

Today, Maraniss continues to run the Sports & Society initiative. It features a newsletter and produces events at Vanderbilt, all while focusing on the intersection of race, gender, and sports and advancing Williams’ goal of giving the program a social justice thread.

“[Williams] gave us an idea that we need to make sure we see through to the end around sports and society,” Lee said. “What Andrew has done in the meantime is ensured that, under the name of Sports and Society, that we continue to have speakers for our community and we continue to raise awareness about issues.”

While the initiative plays a role in Maraniss’ day-to-day responsibilities, he says that it only accounts for about a quarter of his work.

“My role touches a lot of different people and departments here. Some of it has to do with community relations or social justice type of activities,” Maraniss said. “My day-to-day sort of involves a little bit of everything which is really fun.”

When he isn’t helping Athletics, he is continuing to write books with the support of the Athletics department. He has authored four books to this point and is currently working on a ‘coffee table book’ that celebrates the 100th anniversary of Vanderbilt Stadium, which takes place next year.

He is frequently involved in projects that honor former Vanderbilt players and teams and enjoys trying to uphold Vanderbilt’s institutional and historical memory.

“He has been a wonderful attribute to the athletics department,” Lee said. “I trust him very much and I trust him to execute the things that are really important to us that require someone to have dedicated attention.”

To Lee, Maraniss’ passion, commitment and talent consistently stand out, along with his approach that every project matters and will impact the community. With an office that is just outside hers, Maraniss works alongside Lee on a multitude of projects that vary in scale and format.

“He is a pest about things that matter to him and I mean pest in the nicest way, in a positive way; he is not going to let things go,” Lee said. “And that’s a compliment because that’s how change happens. You have to be willing to be a pest.”

Maraniss’ passion for Vanderbilt rings through in his work—he has become a contributor who is dedicated to making Vanderbilt a better play each and every day.

“I think this is a great school. It’s meant a lot to me over the course of my life,” said Maraniss. “The role that Vanderbilt had in desegregating the SEC is really important and it’s just as important now when we seem to be sort of backsliding into the time of open racism. That Vanderbilt can stand for something good and we need to build on that history that we have.”

Maraniss feels very fortunate to not only work for a school and athletic department that support his interest in sports, society and social justice, but also in an environment where he is surrounded by talented people with similar interests.

Having been a Vanderbilt fan since he was a teenager, Maraniss appreciates that opportunity to impact the community he loves.

“I’ve got kids that are 11 years old and eight years old and they love coming to the games, so I get to share my love for Vanderbilt sports with them now, which is really fun,” he said.

Throughout his career, Maraniss has a clear throughline of interest in sports, writing and social justice, all three of which are encapsulated in his role as special projects coordinator.

“They’re just things that matter to me,” Maraniss said. “In terms of the introduction of sports to me, that’s been the way they’ve always been presented.”

Maraniss says that his writing complements his job with athletics at Vanderbilt, as both deal with the same societal issues that come up every day. He believes that through these passions, he is able to most effectively utilize his voice for change.

“[Maraniss] cares deeply for issues that should be important to all of us around diversity, equity and inclusion,” Lee said.

Maraniss is proud to work for an organization that he says not only recognizes that sports can play a role in society, but also strives to be a leader in that area.

As he continues to impact the Vanderbilt community that he is passionate about, Maraniss is appreciative of the opportunity and hopes to work on West End for the rest of his career. While Vanderbilt athletics continues to commit to exploring how sports, race and culture are intertwined, Maraniss will play a significant role in that.

“That’s what makes sports really interesting, is because it gives you a lens into these issues that affect everybody, whether they care about sports or not,” Maraniss said.

He also believes that, now more than ever, people should be passionate about the many issues that society is facing.

“I think this is a critical time in American history,” Maraniss said. “I think that everybody has a role in standing up against it, in fighting for justice in their own way. For me, it’s writing.”