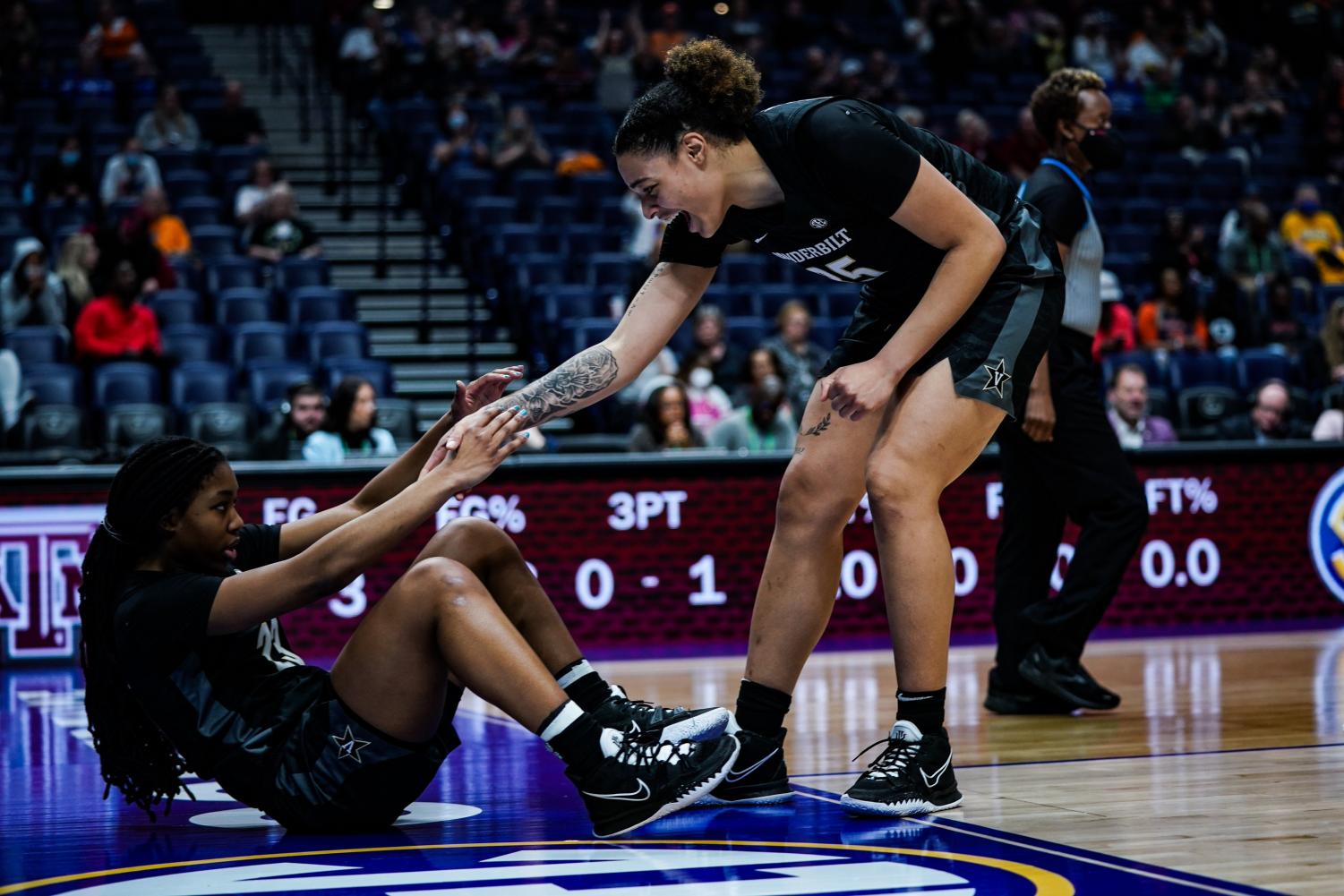 Vanderbilt’s pair of All-SEC freshmen Iyana Moore and Sacha Washington pick each other up during Vanderbilt’s SEC Tournament win over Texas A&M on March 2, 2022. (Vanderbilt Athletics)

Memorial Minutes: The Sky’s the Limit

A look back at head coach Shea Ralph’s first regular season on West End, which proved to Vanderbilt fans that the sky's the limit for her program.

In just her first few years on the job, athletic director Candice Storey Lee has had to hire and evaluate numerous high-profile head coaches amidst a redefinition of what might be possible in Vanderbilt athletics. The Clark Lea era began last fall after Lee appointed him to turn around Commodore football. The Jerry Stackhouse era is in year three with clear improvements but the ultimate goal of postseason relevancy not yet achieved. Both began their tenures with depleted rosters and plenty of ugly losses to show for it.

While at times the losses came in droves for first-year head coach Shea Ralph as well, her first season on West End looked a bit different.

With a similarly depleted roster to her male counterparts—the team lost its leading scorer Koi Love to the transfer portal last spring—Ralph’s group was able to defy expectations in arguably the toughest league in any college sport.

Before conference play even began, Vanderbilt flashed the essence of Ralph’s identity as a head coach. But after consecutive losses to Little Rock by 16 and Middle Tennessee by nine, not all Commodore fans were believers.

But one thing Ralph, rightfully so, has preached all year is staying in the moment and trusting the process. Her team did that numerous times. First, in the U.S. Virgin Islands.

A trip to the Paradise Jam was truly the coming out party for a number of key freshmen and got the Commodores their first Power Five win over Rutgers. They nearly shocked the women’s college basketball world and upset No. 9 Arizona as well, displaying their ferocious defense which would later be the hallmark of their SEC success.

A promising 10-5 nonconference slate wasn’t able to erase preseason voting which dubbed the Commodores the SEC’s weakest team. Vanderbilt was unanimously selected to finish dead last in the loaded SEC this season.

Instead, they came out and won their first conference opportunity, defying the odds against NCAA Tournament hopefuls Arkansas.

Then, as adversity snuck in after five straight losses early in their SEC campaign, a roster full of players that didn’t commit to Ralph could have mailed it in. But they didn’t.

Consecutive conference victories late in January over Kentucky and Auburn before their first ranked win over No. 15 Florida on Senior Night made sure a last-place finish wasn’t in the cards during Ralph’s inaugural season.

“We’re building this program brick by brick,” Ralph said after the win over Florida. “Every step of the way this year, they [the seniors] have bought in. They have given us everything they have—their heart and soul—and I’m so happy that today, on Senior Night, we could get this win.”

As the SEC Tournament’s No. 13 seed, Ralph’s group hopped on the backs of their starting five en route to the program’s first SEC Tournament win since 2016 over Texas A&M. Their season ended in heartbreak the next day, but the milestone had been achieved.

What was evident down the stretch was Ralph’s ability to not only put her players in positions to succeed, but her team’s willingness to buy into its head coach’s intense winning mindset each and every day.

Few coaches coach as hard as Shea Ralph does on the sidelines. She consistently leaves the sidelines appearing just as exhausted as her players each and every game, and her players respond to that. Their ferocity on defense, energy on the bench, relentless toughness on the interior and willingness to see each game as meaningful despite slim hopes of a postseason berth demonstrate far more than tallies in the win column. They demonstrate a belief in what Ralph is building.

The Commodores blew their share of leads this season—they did it on Thursday to Florida in round two of the SEC Tournament. But that shouldn’t be held against them. With a roster featuring two freshmen starters, a pair of seniors who had missed last season with injuries and a rotation that only truly went eight players deep, Vanderbilt accomplished more than they should have in exciting fashion.

Along the way, individual performances shined through thanks to a coaching staff that empowered its players through thick and thin.

All-SEC freshman Iyana Moore set a program record with nine 3-pointers made in a December game against Alabama State. Fellow All-SEC freshman Sacha Washington overcame midseason problems with foul trouble thanks to continued opportunity and notched three double-doubles in her final four games. Senior Brinae Alexander enjoyed a career year shooting the ball in Ralph’s movement-heavy offense and her partner in crime and All-SEC defender Jordyn Cambridge finished her season with the first triple-double in Vanderbilt history in the SEC Tournament.

Ralph encouraged Moore to shoot even through a mid-year shooting lull. She continued giving Washington opportunities despite constant foul trouble early in the year. She handed Alexander the keys to the offense and Cambridge the keys to the defense. And for the most part, it worked. Moore, Alexander and Cambridge averaged 32, 33 and 34 minutes respectively this season due to Vanderbilt’s lack of depth. Imagine what this team could do with a full roster.

As we have seen with Stackhouse’s tenure at Vanderbilt, roster turnover can be damaging to a team’s immediate future outlook. Don’t expect that here.

Cambridge told Aria Gerson of The Tennessean that she intends to return to Vanderbilt next year as a graduate student. Washington, Moore and a slew of others will likely be back as well. And perhaps the key to it all, Alexander, who has two years of eligibility remaining, made very suggestive comments about her future after her team’s final loss to Florida.

“I don’t think we’re done. And I certainly am not done. That’s really all I have to say,” Alexander said.

With a coach that prioritizes winning in a culture that has no doubt thrived, the sky’s the limit for this program. With Cambridge back, the development of underclassmen and a prized recruiting class incoming, Alexander’s return could be the cherry on top that pushes Vanderbilt back into the NCAA Tournament in 2023 for the first time since 2014. And before that, they will get some postseason experience in the women’s NIT this coming weekend.