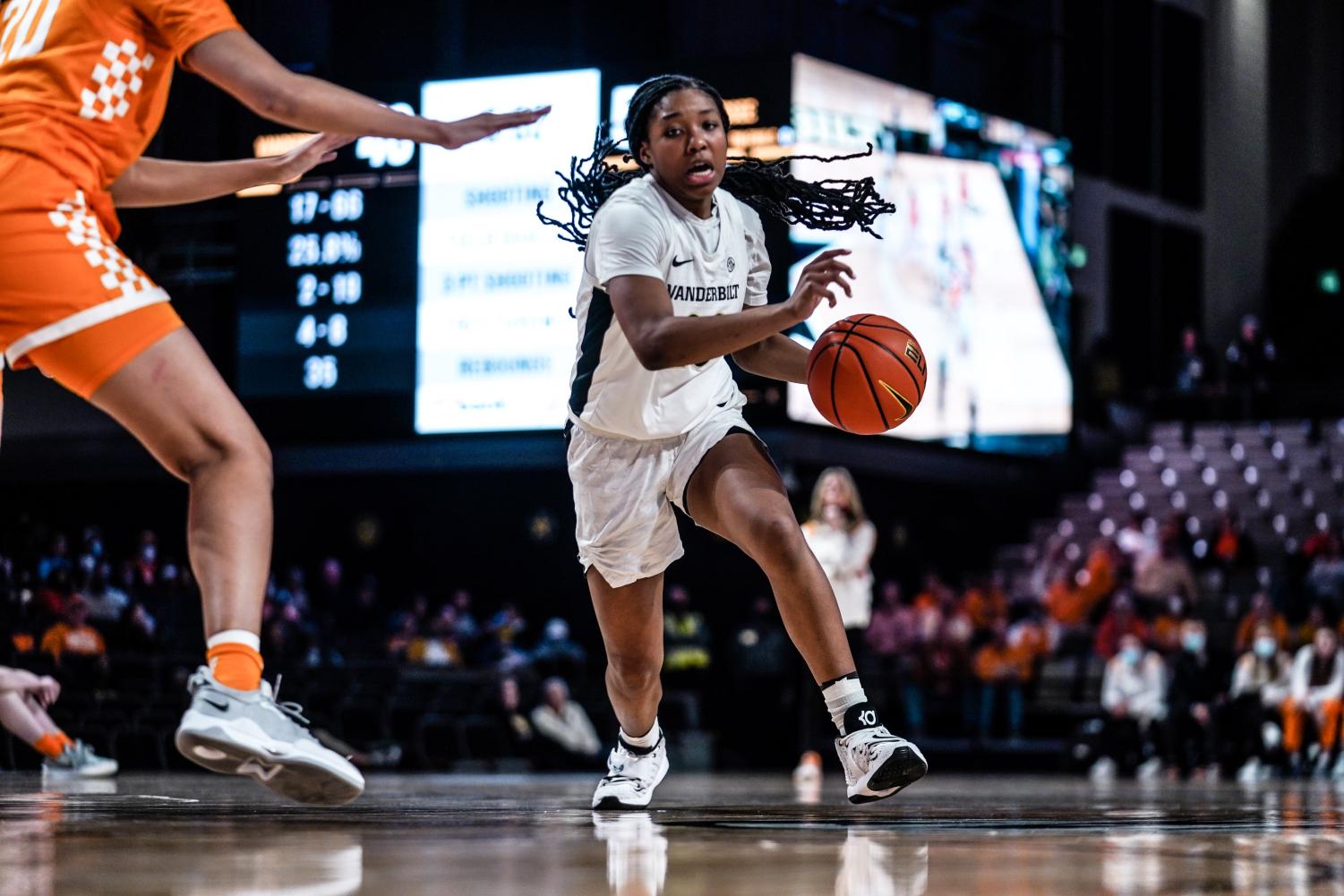 Memorial Minutes: Heating Up in the Cold

Despite losing two of their last three games, the Vanderbilt Commodores have shown great promise in the first SEC games of the Ralph era.

Two losses with a positive headline? Shea Ralph and this Vanderbilt Commodore team deserve it.

Regardless of the outcomes from the Commodores’ first three SEC contests, they have played with passion and energy. Even without students in the stands, anyone can tell through their TV screen that Ralph’s squad puts 100% effort onto the court at all times. Not only is this spirit encouraging for the future of the program, it also makes each game enjoyable to watch even when Vanderbilt doesn’t end up in the win column.

“I really love coaching this team,” Ralph said after the team’s win over Arkansas. “Seeing them improve and seeing the belief and trust they have in each other—I think we really turned a corner.”

After the first 10 games of the season, which included losses to Little Rock and Middle Tennessee State, this team seemed destined for a rough SEC stretch. But then the Commodores gave No. 7 Arizona a run for their money. Then they beat Rutgers. Then, fast forward a few games, Vanderbilt went on a five-game win streak, an achievement that was capped off by a statement victory over the Arkansas Razorbacks. The 54-51 result signified the women’s first SEC win of the season and the first of Ralph’s career at Vanderbilt. It was also the women’s first SEC victory since Mar. 1, 2020 as a COVID-19 shutdown last year prevented the team from getting more than a couple SEC contests logged.

All the emotions for our first win in SEC play. 🥰#AnchorDown pic.twitter.com/QP1CtPOMMy

The team went on to lose a close game to Mississippi State, 70-63. Despite leading for just under 20 minutes of the tilt, Vanderbilt lost momentum in the fourth quarter and fell to an understaffed Bulldog team. Then, the Lady Volunteers came to Nashville and handed the Commodores their second conference loss of the season, 65-51. In both cases, Vanderbilt played hard-nosed defense but fell victim to lapses in offensive production.

So, let’s go over the good, the bad and the exciting from the Commodore’s last three games in this week’s Memorial Minutes

These are just a few words that describe Ralph’s defensive scheme. The high-press, primarily zone—though the Commodores will slip into man-to-man at times just to confuse opponents—game plan has worked wonders early in the season against both strong and weak teams alike.

The basic idea behind the madness is simple—put the opposition under pressure. Pressure creates turnovers. Turnovers lead to more fast breaks. And for a speedy team who has struggled with half-court offense, this is ideal. Pressure also means the opposition can’t set up their offense as quickly, as they have to worry about getting past either full or half-court press first.

Teams playing Vanderbilt often find themselves with only half a shot clock to work with for this reason. Then, they have to hurry. This means less set plays, fewer layups and less open jumpshots. And when opposing players do get open looks, they jump at the opportunity and rush their shooting process. This means that even when Vanderbilt isn’t right on top of a player, they’re still playing defense on her.

A steal and two for Brinae Alexander! 😎#AnchorDown pic.twitter.com/Anipj7rnEP

The problem with this strategy is foul trouble, but Ralph’s squad is well-coached and has stayed disciplined on the whole—only Brinae Alexander has fouled out in the last three games, though she did reach her limit in both the Tennessee and Mississippi State matchups. They rank eighth in the SEC in personal fouls per game (16.6) but second in turnovers forced per game (20.35). Considering they have only had five  foul-outs through 17 contests, that’s a tradeoff I’m willing to make.

Individually, senior leader Jordyn Cambridge has to be mentioned. She is the definition of an active, heads-up defender. She’s smart, routinely gets into passing lanes and consistently swipes the ball away from a driving opponent. She leads all Division 1 players with 68 steals and is fourth overall in steals per game, averaging four per outing.

“We trap, and we make teams turn it over,” Cambridge said. “We just play fast, we make them [the opposition] play faster than they want to play and just really make them uncomfortable.”

If you haven’t been able to watch this team play, you’re missing out. Any basketball fan can get amped by good defense, and the Commodores provide plenty of it. Their defense allows only 57.1 ppg (fifth in the SEC), so pick up the remote and change the channel.

A Problem, No Drought about it

Undoubtedly the biggest problem for the Commodores lies in their half-court offense and scoring droughts. I’ll start by giving you some stats, but be warned, they aren’t pretty:

A small brightside for the Commodores is their 3-point shooting, though. They’re sixth in the SEC with a 32.46% conversion rate, with freshman Iyana Moore making 39 of the team’s 99 3s thus far—she’s also taking 51% of the team’s attempts from beyond the arc.

Still, this silver lining should not take away from the problems Vanderbilt has had on offense. The main issue is the cold streaks the Commodores find themselves stuck in at times. Against Arkansas, there was only one such stretch of 4:13, but the Razorbacks could only score three points themselves during that time, so it really didn’t matter. Issues arise, however, when opponents can capitalize on Vanderbilt’s inability to find easy scores.

The Commodores shooting problems are best exemplified by the early game situation against Tennessee: Vanderbilt’s defensive pressure was working despite them being undersized compared to the Lady Vols. They forced eight turnovers and only had one themselves, but still trailed by double digits.

Scoring droughts is how.

This was also the reason Vanderbilt lost to the Bulldogs. The Commodores led Mississippi State 25-18 but didn’t score for over six minutes and found themselves down by three, 28-25, at the end of the run. More critically, Vanderbilt allowed a 14-point slide to happen in the fourth quarter. They led 52-49, but 4:32 later, Mississippi State was winning 63-52 with under four minutes left in the game. This effectively sealed the game for the Bulldogs.

If Vanderbilt is going to compete with SEC teams, they need to find ways to score when the shots aren’t falling. Right now, when things aren’t going their way, they seem to just hoist up shots and hope for the best. They need to attack the basket more and use screens more effectively, for instance:

The screen 🤝 the cut. #AnchorDown pic.twitter.com/5GUImcsZSB

Or, make better use of ball movement. When droughts occurred, generally the Commodores weren’t making opposing defenses work enough. This is a good example from the Tennessee game of a couple quick passes that resulted in an open look:

The Black and Gold offense needs work, and in times of jeopardy, they need a reliable jump start. Either someone on the team needs to step up and learn to be an isolation player, or Ralph has some more work cut out for her.

This is a young team. Though it has leadership in Cambridge and Alexander, the squad played an abbreviated schedule last season, and at times, the lack of college minutes logged shows. There are small miscues in communication and mental errors in clutch time, but these aspects of the game improve with experience. Ralph will certainly impart some of her own wisdom on the group, but to a certain extent, they must learn by being thrown in at the deep end. And, with their upcoming slate of games, there’s not much of a choice.

The Commodores will play in Baton Rouge today, Jan. 16, as they take on No. 12 LSU at 12 p.m. CST. Then, Vanderbilt comes home on Thursday, Jan. 20, to take on Missouri who just lost an overtime thriller to LSU, 87-85. Finally, on Jan. 24, the Commodores go to Columbia to face No. 1 South Carolina in what might be their biggest challenge of the season. A win in any of these games would be extremely impressive for Ralph & Co.

In general, there should be plenty of optimism moving forward on West End. The most important part of any program, culture, seems to be the place where Ralph excels the most. Don’t take my word for it, though. Watch a game. Whether up by 25, down by one or down by 40, this team battles. It doesn’t stop until the final buzzer on both ends of the court, and the players support one another. This, to me, is the most crucial takeaway of the season thus far.