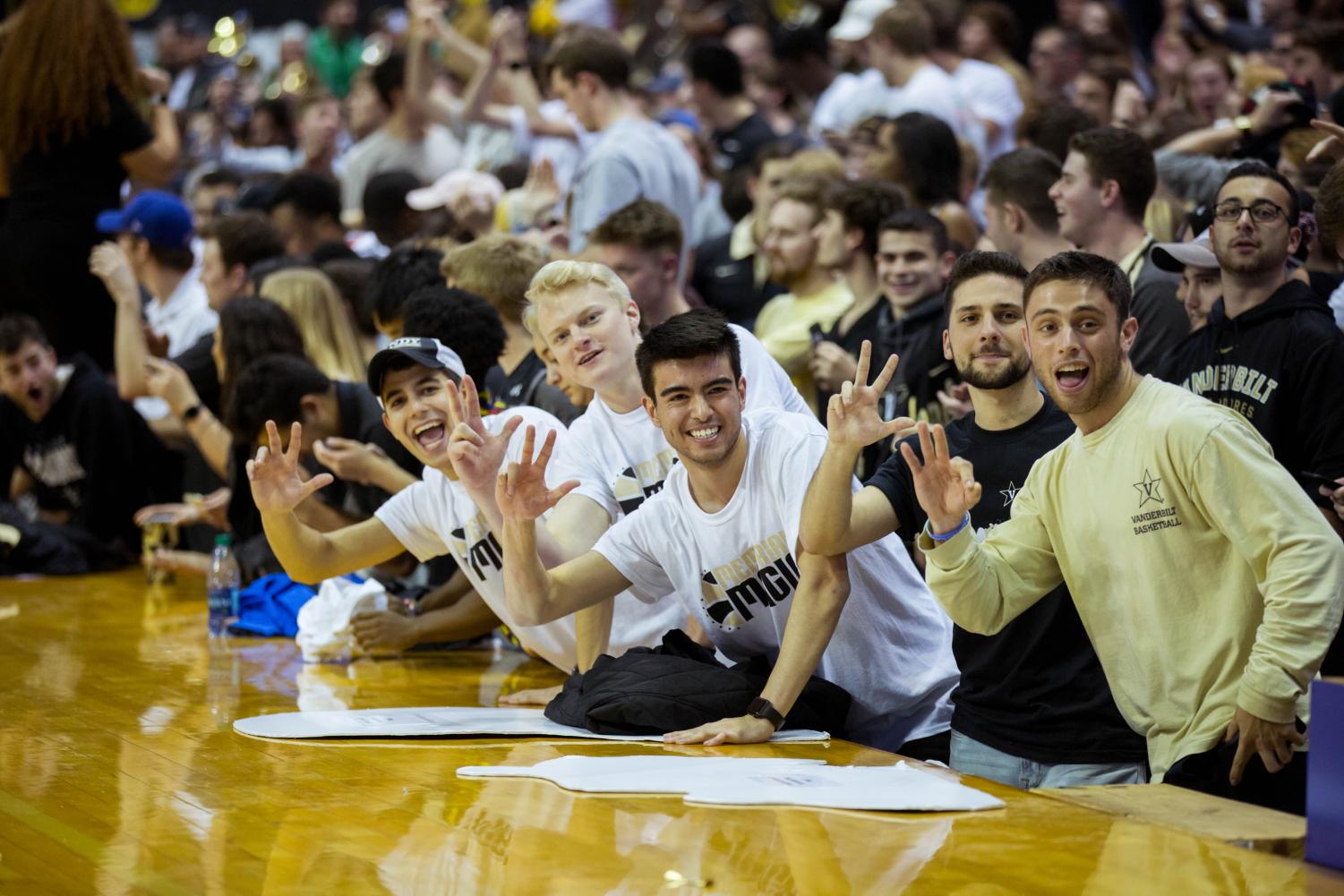 By not permitting students into athletic events until at least Jan. 24, Vanderbilt University is failing what should be its most prized and important constituency of fans: students.

On February 15, 2021—almost one year ago—Vanderbilt announced that a select number of senior students would be permitted back inside Memorial Gymnasium for the first time since Feb. 26, 2020 and the beginning of the COVID-19 pandemic. After months of basketball games that exclusively allowed friends and family of team members in the stands, students were the first fans permitted back inside of one of Vanderbilt’s most sacred sites.

When the pandemic arrived at a crossroads in February 2021 and nationwide cases declined sharply, Memorial Gymnasium’s doors were opened back up to students, the backbone of Vanderbilt’s home-court advantage.

After nearly a year of student support in stadiums and gyms, the world has met another fork in the seemingly never-ending road that is the pandemic with the omicron variant. Despite taking necessary precautions which included various testing, vaccination requirements and a delayed second semester, we—students—are now the first ones being forced out of our own home gym this January.

As COVID-19 once again spreads rampantly throughout the United States, Vanderbilt and its peer institutions have had a choice to make. Duke University elected to take classes online for the first week of the second semester, but not restrict on-campus activities. Harvard University announced they would begin the second semester on-time on Jan. 24, but would restrict certain on-campus activities, including attendance at athletics events until at least Jan. 23.

As part of the University’s Commodores Care period that restricts in-person activities until Jan. 24, not a single student is permitted to claim their free ticket and step foot in Memorial Gymnasium for the next five Vanderbilt men’s and women’s basketball games combined. As students start to head back to campus for the start of classes on Jan. 18, none will be permitted to attend many of the most important basketball games of the year.

What won’t change on Saturday as the Vanderbilt men host South Carolina is the general public’s ability to attend Vanderbilt athletic events. Memorial Gymnasium will operate at 100 percent capacity for each of these five games.

No new restrictions exist on who can attend games—with proof of vaccination or a negative test, anyone is permitted inside the gym. Instead of students sitting in sections G through K, paying customers will grace the wooden bleachers where students have slapped the floor of Memorial Gymnasium for decades.

Currently, for the asinine price of $200, the general public can watch Vanderbilt play Kentucky on Jan. 11 from the best seats in the house: the student section. The University restricted student section tickets to season ticket holders for $20 per ticket while saying they were unavailable for resale. Nonetheless, they are still being resold on secondary platforms despite Vanderbilt’s urge against it.

Instead of upgrading season ticket holders to better seats for free, donating tickets to community members or putting a cover over the student section completely, effectively anyone with a vaccination card or proof of a negative test who is willing to pay will be able to sit in the student section over the next five home games.

Vanderbilt has done an incredible job of keeping students, staff and teachers healthy throughout the pandemic, with positive case rates never rising above 0.6 percent last semester among the 96 percent of vaccinated Vanderbilt community members. Every step of the way, I have been thankful for the University’s rigorous approach to COVID-19 prevention. It has allowed me to have the semblance of a healthy final two years at a place that has become a second home to me.

But this decision makes me sad.

It’s sad that the work that Lee, Jerry Stackhouse and Shea Ralph have done to put Commodore basketball back on an upward trajectory won’t be rewarded with hundreds of students cheering for some of their most important games of this season. This decision straight from Kirkland Hall is rooted in no common sense or rationale and once again puts into question leadership’s alignment with Lee and athletics’ goals as a department.

Furthermore, this decision demonstrates palpable hypocrisy and reflects shortsightedness from leadership that continues to fuel fans’ long-broadcasted concerns regarding the possibility for athletic success at Vanderbilt.

If restricting student attendance in Memorial Gym was truly a community health decision, then I wonder why Vanderbilt still allows all members of society to attend our basketball games. How is the university choosing who is safe to attend a game?

Students are required to be vaccinated and subject to regular testing if they aren’t boosted. Students are mandated to provide proof of a negative test before arriving on campus for the second semester. Students had to wait an extra week to return as the opening of residence halls was delayed to allow for a buffer between holiday travel and return to campus.

Who is safer right now than students? If anyone at all should step inside Memorial Gymnasium over the next couple weeks, it should be us.

If you want to limit attendance in stadiums, fine. Why not go to 50 percent capacity in athletics facilities as many Canadian arenas have done? Limit attendance to just friends and family of the teams like peer universities such as Harvard have done. Or return to a system that permits students and friends and family only like last spring. But whatever you do, don’t kick out those who should be your most prized constituency while maintaining full occupancy for others.

Vanderbilt won’t allow its healthiest and most protected fans into the building, but it will open its doors in full force to elderly, immuno-compromised, unvaccinated and other vulnerable groups.

Any way you spin it, it just doesn’t make sense.

We were the first ones welcomed back last February. We complied with twice-weekly testing last spring, adhered to vaccine requirements on campus, dealt with a new student ticketing process throughout the fall and as early as last week, shifted our schedules to accommodate starting school a week later on just 10 days notice. Now, we will arrive back to campus and not be able to go support our classmates and peers as they continue competing amidst a global pandemic.

Not only has Commodores Care overstepped its bounds for the regular student, but it also impacts every student-athlete on campus as well. Student-athletes will maintain their rigorous training, playing and travel schedule without the support of their student body in the crowd. It’s devastating for the coaches as well, who each have their teams playing their best basketball in years.

Seniors won’t get to experience their final home men’s and women’s games against rival Tennessee as students. They won’t get to slap the court and help bring back Memorial Magic with the eyes of the nation watching on ESPN on Tuesday night as Stackhouse and the men battle Kentucky. They have once again been told by University leadership where athletics and supporting your classmates should sit in their list of priorities. And it’s far too low.

If nothing else, it’s maddening that Vanderbilt couldn’t even use a bit of common sense in this decision.

While Commodores Care applies to all students, 50 percent of Vanderbilt’s population lived off-campus in 2020-21. That likely leaves 2,500 students, at least, not directly under university control despite the supposed “quiet” period of Commodores Care. Does the university believe that off-campus students will restrict themselves to their bedrooms for nine days at the beginning of the semester?

Instead of remaining on campus to go support their basketball teams over the next two weeks, students will find other outlets for their down time. The nation will tune into ESPN and SEC Network for Commodore basketball games and see a student section full of everyone but students, making the university look that much more foolish.

Vanderbilt athletics will once again appear as the laughing stock of the SEC as orange and blue paint the stands of Memorial Gymnasium. Vanderbilt leadership’s attempt to demonstrate a dedication to student health will only make recruits cringe, force alumni to roll their eyes and drive students to find something else to do on a night in Nashville; this decision doesn’t prioritize students and it’s not making anyone any safer.

The Vanderbilt Hustler welcomes and encourages readers to engage with content and express opinions through the comment sections on our website and social media platforms. The Hustler reserves the right to remove comments that contain vulgarity, hate speech, personal attacks or that appear to be spam, commercial promotion or impersonation. The comment sections are moderated by our Editor-in-Chief, Rachael Perrotta, and our Social Media Director, Chloe Postlewaite. You can reach them at [email protected] and [email protected]
All The Vanderbilt Hustler picks Reader picks Sort: Newest
Subscribe
Login
4 Comments
Newest
Oldest Most Voted
Inline Feedbacks
View all comments
A
Anita Williams

Justin’s article clearly evaluated Vanderbilt’s errors in judgement on game attendance for the students!! In a way, it again demonstrates that vaccinated folks are penalized for following rules and others who will attend those BIG games get away with lame excuses for vaccine status.

This was Justin’s best piece yet and I applaud him for addressing such a controversial societal dilemma we all currently face whether workplaces or educationally; stupid decisions being made for the sake of the almighty dollar and not health!

Agree. Vandy alum here. BRUTAL decision by Diermier on so many levels.

“Any way you spin it, it just doesn’t make sense” isn’t technically true, though Justin is too polite to say it.

The school is terrified of getting sued over a student dying/being hospitalized of COVID, so they’re willing to do things like shutting students out of basketball games to minimize the risk of transmission. They ignore the fact that we’re all young, vaccinated, and boosted (due to vaccination and boosting requirements that I support) making our COVID risk quite low. Further, no one is forcing students to risk COVID exposure by going to the games—it’s a risk that we would be taking voluntarily.

At the same time, they’re gonna make a nice chunk of money off of selling the student section tickets.

Ultimately, this all comes back to money.

So I’ll spell this out in terms Vandy might care about: this level of transparent absurdity from Vandy administration is something I’ll keep in mind when this school comes asking for donations one day…

This article is well written and is SPOT ON! What the leadership is really saying is that they think that VU is the only school in the SEC or even the country that truly cares about its students. There is no common sense in this decision. They really are creating another home game for UK and UT with this ridiculous decision so that they can make more money by allowing prices for student seats to be jacked up for those two games. I have been a loyal Vandy fan for 56 years, and I’m not sure I’ve ever seen a worse decision made by VU administration.