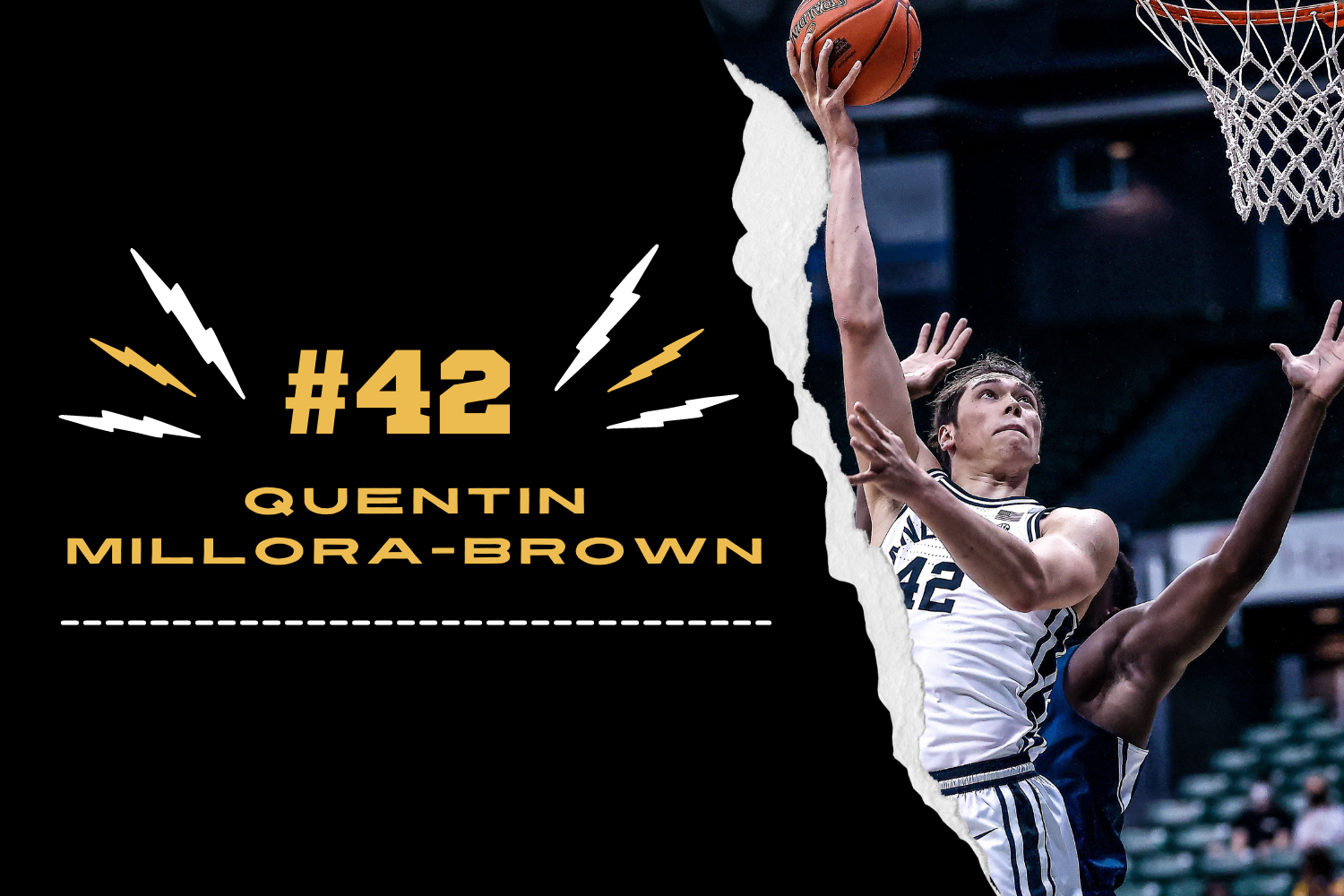 Quentin Millora-Brown putting up a hook shot during Vanderbilt’s trip to Hawai’i for the Diamond Head Classic in Dec. 2021. (Hustler Multimedia/Emery Little)

QMB for MIP? A look at Quentin Millora-Brown’s case as Vanderbilt’s most improved player

Vanderbilt center Quentin Millora-Brown started just eight games last season. But this year, he has expanded his game and is among the Commodores’ most productive players.

Even before Quentin Millora-Brown stepped on the floor as a Vanderbilt Commodore, head coach Jerry Stackhouse joked about his center being an engineering major—likening his background as an engineer to his ability to be a cerebral presence on the court for his team.

“He’s in the engineering program, so you already know he is super super smart from the standpoint of talking, being an anchor for the defense, being able to play on the perimeter as well,” Stackhouse told The Hustler back in April 2020.

Nearly two years later, Commodore fans are finding out exactly what the head coach saw in Millora-Brown, as he continues to emerge as one of the Commodores’ most important players by masking what he lacks in athleticism with intelligent and gritty play.

Stackhouse showed his belief in the junior transfer from Rice immediately last season, giving him the starting nod in Vanderbilt’s first five games of 2020-21. But an early January bout with COVID-19 set the big man back and he was unable to reach his peak form throughout his first year on West End.

“[I] kind of had a little rattle right before SEC play last year, catching COVID-19 right around this time last year,” Millora-Brown told The Hustler. “I wasn’t quite where I wanted to be going into SEC play but as we went through it, as we got towards the end of SEC season, I started to feel better and better.”

Even so, he went on to average under 11 minutes per game after returning from COVID-19 protocols en route to 3.1-point and 3.2-rebound per game averages. With this rocky end to the year, Stackhouse hit the recruiting trail and brought in prized transfer center Liam Robbins. Everyone inside Memorial Gymnasium knew Robbins was slated to be the starter. But that didn’t stop Millora-Brown from getting himself ready to play SEC basketball once again.

The weight room and film room became Millora-Brown’s home this offseason as he got his body ready for the grind of an SEC schedule while honing his cerebral approach to the game via film study. Now, he is doing exactly what Stackhouse recruited him to do—and more.

“Q was absolutely awesome. Just super proud of who he is and how he has gotten better and better and worked his butt off to become the player that he is showing right now,” Stackhouse said after Millora-Brown’s first double-double of his Vanderbilt career on Dec. 18.

With Robbins still sidelined, ‘Q’ has emerged as not only a force on the backboard, but also as a playmaker out of the post, a valuable defensive presence and an advanced-statistics darling.

Sure, Millora-Brown was supposed to be a backup this season. But through 12 games with him as the anchor on defense, Vanderbilt has surpassed even optimistic expectations on that end of the floor.

While it might not show up in the block column of the box score like it does for Robbins, Millora-Brown’s ability to impact opposing shooters by being in proper position and keeping his hands high is second to none on Vanderbilt’s roster.

One of the main ways he has been able to do this is actually by staying on the court. Big men that can’t stay out of foul trouble are commonplace in college basketball, but this year, thanks in part to his offseason work in the weight room, Millora-Brown’s fouls are actually down by 25 percent. He is averaging just 0.09 fouls per minute as opposed to 0.12 last season. That sounds small, but it’s the difference between 3.5 fouls and 4.7 fouls per 40 minutes of play.

Not only is this allowing him to stay on the court, but it’s preventing opponents from generating points as well. As exhibited below, this season, Millora-Brown has shown an improved ability to pick up opposing guards on drives, keep his hands high to force bad passes and impede shots by just sliding into better position.

One of the ways he has become adept in defending without fouling has been offseason work matching up with other guards.

“One of the things that we were doing in the offseason was having everyone run not their natural position,” Millora-Brown explained. “We were having the guards work with the post stuff and the bigs work with the guard stuff.”

This work shows in his play, as Millora-Brown has become comfortable matching up with guards off of drives and helping create turnovers by using his long arms to impede vision.

Stackhouse’s offense is not easy to master, but through experience, Millora-Brown—and other upperclassmen—evidently feel comfortable in its schemes. Vanderbilt is currently allowing just 94 points per 100 possessions to opponents, top 60 nationally and the program’s best mark since 2017.

The Commodores take a different approach to defense each time they face a new opponent—whether they trap high ball-handlers, hedge or ice out screens and more changes on a game-to-game basis. But what doesn’t change is the team’s focus on scrambling to recover and playing defense as one unit. And those things have come via experience for Millora-Brown.

“Just being able to make those reads in-game is a big piece to our defense and I feel like this year I’ve started to slow down a lot,” Millora-Brown said. “[Defense] doesn’t always happen the way it’s supposed to—that’s something coach Stackhouse says—it can’t always be perfect, but we cover up well. That comes from experience playing with each other.”

Millora-Brown had 12 assists last season in 256 minutes played. He has 20 assists—second most on the team—in 274 minutes so far this season. That’s more than a drastic increase and it reflects the time the big man has put in to slow down the game.

“At least for me, film is like the biggest part of play,” Millora-Brown said. “So just honing in on the little techniques that we needed to and I thought that [new assistant coaches Ed Conroy and Michael Curry] have done a great job of just pointing different things out to me to try and see if I like it and if it works for me.”

There’s no doubt the small techniques and tricks of the trade Millora-Brown referenced have transformed his offensive game from a simple offensive-glass crasher to a capable pick-and-roll partner and quality interior passer.

Beyond his defensive abilities, Millora-Brown has helped transform the Vanderbilt offense into an entity capable of working inside to out. His scoring is way up—he already has five games with over eight points, something he did just once last year—mostly via pick-and-rolls with Scotty Pippen Jr.

But what makes him such an important cog in Vanderbilt’s offense is his ability to direct traffic and actually act as a point guard in the post.

In the clips above, notice his patience and how he bobs his head as if to urge others to cut around him. He waits for players to find space, chooses his passing angles with precision, doesn’t make ill-advised passes and often finds players after numerous iterations of off-ball movement. The speed of the game has slowed for him to the point where he is able to calmly sit in the post with the ball and wait for plays to develop.

Millora-Brown has also cut his turnovers down by 25 percent this year despite a higher usage rate. In addition, after holding a 0.82 assist-to-usage ratio last year, he now boasts a 1.3 assist-to-usage ratio—showing that his assist numbers have risen alongside his increased usage.

What might stand out the most, however, is how in tune he is to Stackhouse’s vision for offense. He knows where the soft spots are designed to be, gets teammates into proper positions and draws plenty of help defenders to allow others to get open looks from beyond the arc.

Truly one of the most valuable things about Millora-Brown is his ability to simply make good team plays that others don’t come up with. One of those being the charge.

Charges are not only a momentum swing for a defense, but they demonstrate a possession well-executed. Millora-Brown took three charges himself in Vanderbilt’s big win over BYU on Dec. 23. But he doesn’t take the credit for doing so.

“The team forcing [guards to the right spots] on drives, they don’t let the guard come back in so that way I can stand there and take it,” Millora-Brown said. “If they leave a gap, then the guard can try and break through it and it’s a lot harder to take a charge. But trusting our scheme, trusting the defense all around has helped me to do that more this year than last year.”

When you watch the senior work on defense, notice how calmly he slides his feet. There’s nothing frantic about his body movements, he jumps at the proper time to impede shots and sees the floor so wonderfully that he is able to, as a 6’10”, 230-pound center, rotate in time to take charges.

At the other end of the floor, he has made it a focus to crash the offensive glass more aggressively. Through 12 games last season, the Commodores were averaging nine offensive rebounds per game. This year, they are averaging nearly 13 largely thanks to Millora-Brown, who averages three on his own.

As a 3-point shooter, one of the easiest shots in basketball is a direct kick-out from the post. You can step into the shot, your shoulders are already square to the rim and your eyes are already fixated on your target. Millora-Brown’s ability to set his teammates up with such looks has been on full display all of this year.

When the big man is off the floor this season, the Commodores have struggled to a scoring differential of -4. When he’s on the court, Vanderbilt has a cumulative plus/minus of +112. That should be about all you need to know about how valuable QMB is to Vanderbilt’s lineup and why he might just be the Commodores’ most improved player this year.

“It’s all the little things, working early, different little techniques that just give you small advantages,” Millora-Brown said. “You don’t need to be leaps and bounds beyond people. You just need to take advantage of every little thing that you can.”