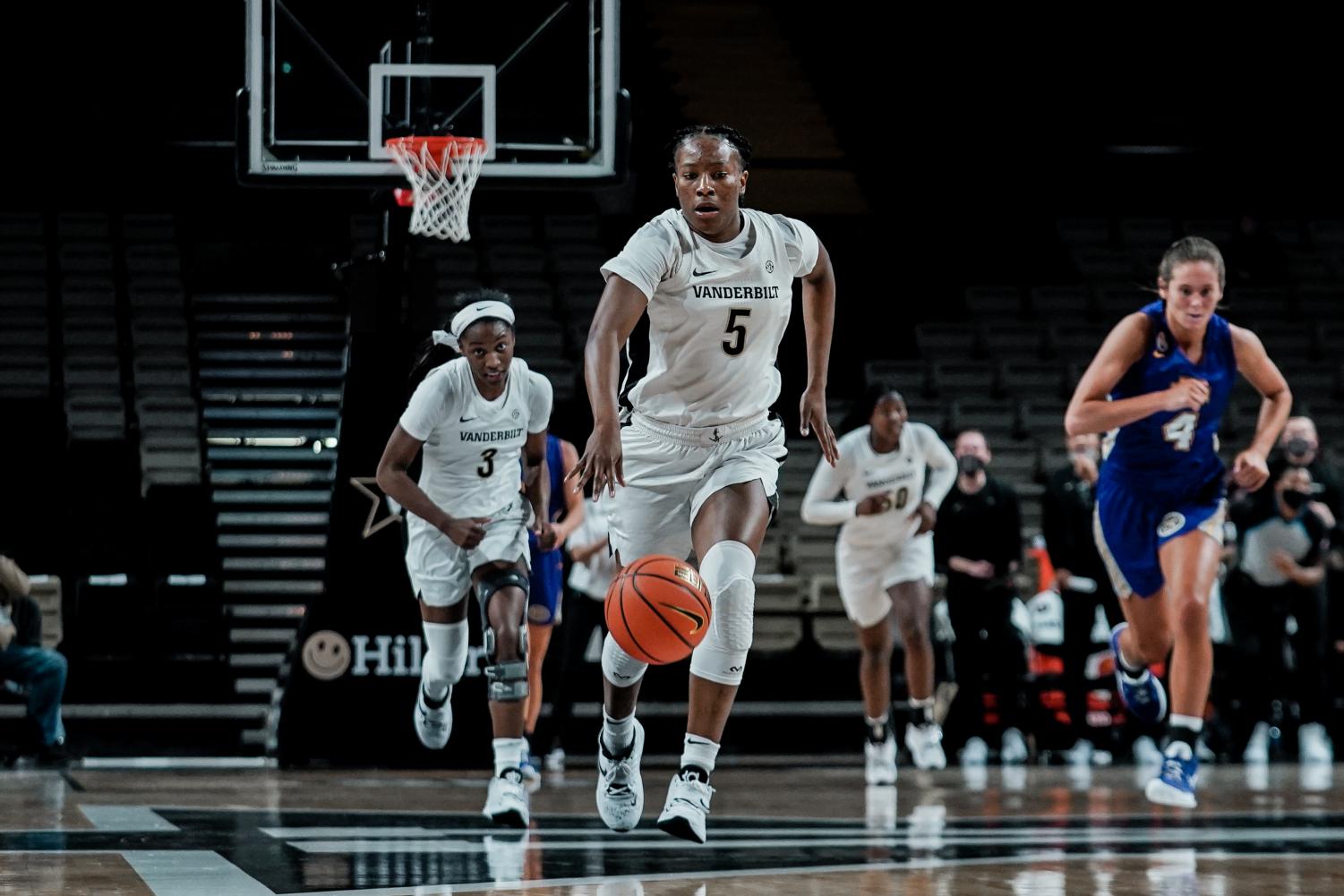 Yaubryon Chambers dribbles up the court during a game in 2020. (Vanderbilt Athletics)

How Yaubryon Chambers is helping the Commodores find their rhythm

Vanderbilt forward Yaubryon Chambers is an intricate part of the Commodores' rebuild under Shea Ralph and is using her musical talent off the court to help build rhythm with her teammates on it.

Yaubryon Chambers’ journey to Division I basketball started thanks to a backyard pickup game with her brother. But basketball was not always the junior forward’s game of choice.

“I really started playing volleyball first, because my sister played volleyball. I kind of wanted to be like her in that way,” Chambers told The Hustler. “But once I found basketball, I just liked the energy and the pace of it, and how you get to run. Volleyball is a little more stationary. All the running that’s involved with basketball, I like that about it.”

In seventh grade, Chambers left volleyball behind and made the official switch over to basketball, signing up for Antioch Middle School’s basketball team. By high school, she had transitioned from playing on her school team to playing on the travel circuits as well, competing against players that would soon become her teammates at Vanderbilt.

Playing at the college level was not something that Chambers had been aware of, let alone considered, until her peers started getting recruited by colleges and universities. But this discovery was a game-changer.

“Once I found that out, it was a whole new world,” Chambers said. “And I was like, ‘Imagine how far you can take this. Imagine the people that you meet, and the memories you will make.’”

So when Vanderbilt came knocking on Chambers’ door, there was no doubt that she would take advantage of the opportunity.

“I’m so excited to have the opportunity to play in the SEC,” Chambers said. “Also the degree that I get from this school. I’m all about what happens when basketball stops for me. And I feel like playing here will put me in a position to have an option to do something with my life beyond basketball. And it’s a growing program. We’re trying to make it to the successful rankings. And I would love to be a part of building something like that. So that’s the biggest reason for picking Vanderbilt.”

Seventh grade is a relatively late start for a basketball player, especially on the Division I courts, but Chambers has never let this slow her down. And this approach to the sport has not gone unnoticed by the coaching staff.

“When we’re getting out here, she’s really a sponge,” assistant coach Ashley Earley said. “She attacks everything, every challenge that she’s given. She does it to the best [of her ability].”

Chambers’ commitment to the game has paid off. During her freshman year, she ranked fifth on the team in field goal percentage, and by her shortened sophomore season, she was starting in every game.

Although the women’s basketball team saw their 2020-21 season shortened due to COVID-19, Chambers’ musical endeavors have kept her in the spotlight. A talented singer, pianist and drummer, Chambers has been releasing singles on Spotify since 2017.

“Music is definitely something I want to pursue,” Chambers said. “My dad, he’s a musician. And I just grew up behind him, watching him and seeing everything that goes on behind the scenes. I am very much inspired by that, and I would love to follow in his footsteps and pursue something like that.”

Growing up on everything from gospel to musical numbers, Chambers has an eclectic taste in music. But irrespective of what is inspiring her at the moment, Chambers’ priority while making music remains the same: create harmony.

“I grew up listening to singers that blend well together,” Chambers said. “So that’s one of the biggest things that influenced my music with regard to my style and the type of stuff we do on a track.”

Creating harmonies is important when creating sounds, but Chambers has also found this focus on harmonies helpful on the basketball court.

“Basketball, there’s a lot of rhythm to it. You can’t just throw the ball to your teammate at the wrong time. There’s a timing to everything—everything has a time. It’s all about timing. And when you and your teammates are on the same tempo, it’s something magical,” Chambers said. “I feel like basketball is something that is connected to my music 110 percent. There’s a feel to it. And when you can feel the game with your teammates, it’s amazing.”

After a season shortened due to the pandemic, Chambers and her teammates have begun taking advantage of a clean slate. With a new head coach and a newfound energy, the forward and her teammates are ready to find their rhythm once again.

“COVID came in and shook everything up,” Chambers said. “And you know, just not having a season really makes you not want to take this for granted. It’s easy to kind of go through the motions and kind of get stagnant and having all of this time off away from basketball, it really makes you hungry and it makes you miss the game. So I feel like that’s going to be something that fuels us this year. With this new administration, we’re excited to learn from them and grow with them and just get things back on track.”