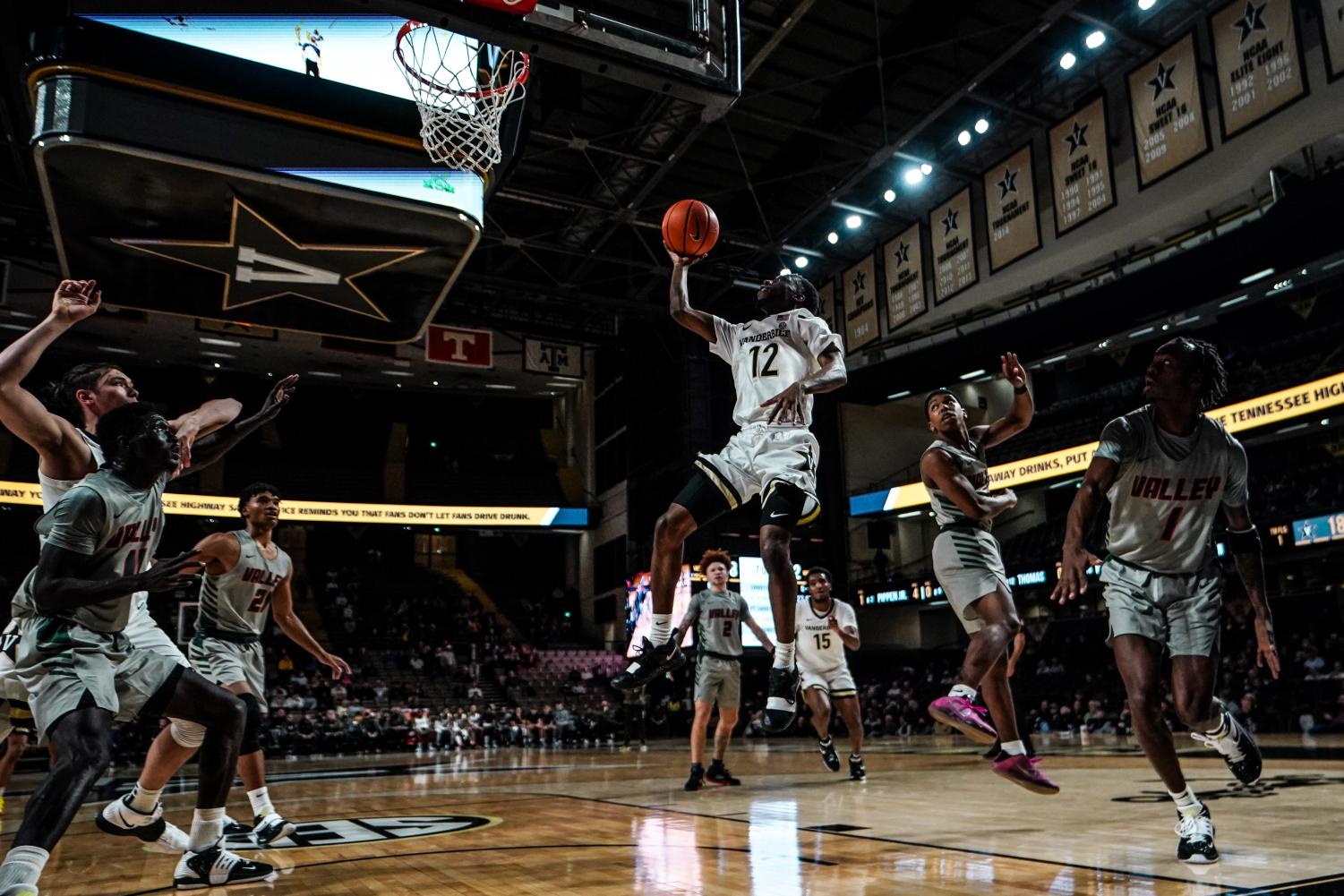 Trey Thomas goes up for a layup against Mississippi Valley State (Vanderbilt Athletics).

Memorial Minutes: Work to Do

Despite a 3-1 stretch, the Commodores have yet to prove they can beat a quality high-major opponent. Can they change that this week?

Like our last Memorial Minutes, this edition starts off a bit sour. Vanderbilt managed a 3-1 record since our last column, but in their biggest test out of that quartet, they fell to SMU in Dallas, 84-72. The Commodores also lost freshman point guard Peyton Daniels to the transfer portal in that time span.

The loss to the Mustangs on Saturday night dropped the Commodores’ record to 5-2 on the season and effectively sprung up some pressure for Jerry Stackhouse and crew in year three of his tenure. Despite seeing a sizable jump in their defensive efficiency rating (per KenPom) to open the season, the Commodores allowed a season-high 84 points to SMU, 56 of which came in the second half.

Perhaps more concerning: Vanderbilt held a 12-point halftime lead that evaporated within minutes of the second half starting. For Stackhouse and the Commodores, that sets up a big week with tests at home against Temple and Loyola Chicago. Let’s take a dive into this week’s Memorial Minutes to digest the past four games and look at the week ahead.

It has certainly not all been bad news for Vanderbilt over their past four games. The Commodores managed a three-game winning streak after their loss to VCU, defeating each of their opponents by double digits. It started off with a Sunday night win over Winthrop, 77-63, featuring breakout performances from both Jordan Wright and Tyrin Lawrence.

Stackhouse has talked at length about Wright’s offseason transformation, and the junior has been a massive bright spot for Vanderbilt through seven games. Against Winthrop, the Louisiana native dropped a career-best 28 points on 5-of-7 shooting from behind the 3-point arc. Wright is averaging 14.7 points and 6.4 rebounds on the campaign thus far and has emerged as a reliable second, and sometimes even first, option for the Commodore offense. He’s also gone 11 of 28 from deep (39.3%) in seven games after hitting 16 3s all of last season.

Lawrence, coming off an ACL tear last season, has come into his own as well. The sophomore turned in 20 points against Winthrop—also a career best—displaying an array of acrobatic finishes around the rim and touch from deep as he hit both of his 3s. Even after the ACL tear, Lawrence possesses as much athleticism and length as anyone on the Commodores roster. As he adjusts back to game-speed, consistency will be a theme for the youngster. The outing against Winthrop is the only time all season he has been in double digits, but Vanderbilt needs offensive aggression from him, especially while Rodney Chatman and Liam Robbins remain sidelined. Nonetheless, like Wright, Lawrence has emerged as an enticing source of encouragement early on in the nonconference slate.

After the win over Winthrop, Vanderbilt went on the road to the Steel City and defeated Pittsburgh by a score of 68-52. The Panthers pose a rather measly threat—they are ranked No. 193 on KenPom, good enough for last in the ACC by over 100 spots—but the victory was significant for the Commodores.

It marked the first nonconference road win against a Power Five opponent in the Stackhouse era, and first since Darius Garland led Vanderbilt to a win over USC in Los Angeles in Nov. 2018. It marked a solid confidence booster for the Commodores and good experience for this group to get a road victory under their belt. Further, the game took place the night before Thanksgiving, exemplifying solid discipline and focus from this squad and an appetizer treat for the team prior to the holiday.

The third win of the Commodores’ win streak came against Mississippi Valley State, who they dispatched with ease. MVSU is ranked last in KenPom, so the 75-36 win wasn’t overwhelmingly significant, but it was a continuation of a trend from Vanderbilt’s first six games of the season: improved defense.

“Our defense was really good in the first half of the game and that continued in the second half, and we were able to pull away,” Stackhouse said after his team’s third straight victory..

And not only was the defense better in that contest—there’s been a significant jump in the effort on that end of the floor for the entire season. Even after the shellacking Vanderbilt took against SMU, KenPom rates the Commodores as the 69th-best team in the country in terms of defensive efficiency.

Vanderbilt ranked 136rd in that metric last season and 221st in 2019-20. Defensive fortitude has never been a strength of the Commodores under Stackhouse, but with perhaps his most talented squad yet on West End, the third-year coach has fine-tuned a defensive attack predicated on creating turnovers. According to KenPom, Vanderbilt ranks 23rd in the country in turnover percentage and 14th in non-steal turnover percentage.

And now for the bad. Riding a three-game winning streak and a 12-point halftime lead, Vanderbilt was beaming with confidence 20 minutes into Saturday’s contest against SMU. Scotty Pippen Jr. led an offensive attack that managed 40 points in the first half and the star guard tempered SMU standout Kendric Davis on the other end of the floor.

Then, the second half happened.

In a meltdown that represented the worst showing for Vanderbilt since a blowout 83-68 loss against LSU last March, the Commodores were thoroughly outplayed in the second half to the tune of a 56-32 beatdown. Essentially nothing outside of Pippen Jr. went right for the Commodores as the length and depth of the Mustangs gave Vanderbilt all types of issues.

For Stackhouse and his team, it was a concerning outcome for a number of reasons. First off, it marks the second loss in two tries against teams inside the top-100 of KenPom after the dud against VCU. Second, it was a second half that saw Mustang coach Tim Jankovich have his squad much more prepared coming out of the locker room—showcased by an 11-0 run to open the frame for SMU. Lastly, and perhaps most importantly, it exposed some of Vanderbilt’s existing warts that have been kept to a mere whisper through the 5-1 start.

But, maybe (hopefully?!), fortunately those flaws are seemingly interrelated with the injuries to transfers Chatman and Robbins. Lack of a second ball-handler. Minimal experience on the bench. Inadequate length and depth in the frontcourt.

Against SMU, the Mustangs let Pippen Jr. get his and forced the other Commodores to beat them. And in the second half, they didn’t. Outside of Wright (who scored 14 points on 4-of-8 shooting) and Quentin Millora-Brown (8 points, 4 rebounds), only one Commodore scored more than 4 points—freshman Shane Dezonie, who had 9.

Perhaps related—not a single one of those Commodores has more than one year of experience playing college basketball. Inconsistency has plagued sophomores Lawrence, Myles Stute, Trey Thomas, Jamaine Mann and Terren Frank, and none provided impact in Dallas. Stute and Thomas have both had their moments this year—Stute with 20 points against MVSU and Thomas with 14 against Pittsburgh—but have struggled to find value when they don’t have their 3-point shot falling.

Mann and Frank have shown progress in the front court against mid-majors, but have yet to translate that into Vanderbilt’s two toughest contests. With just Dezonie and Gabe Dorsey—who has played just sparingly in the non-conference—left to make up the freshmen class, someone in that group of second-years is going to have to step up this week and beyond until Chatman and Robbins get back healthy.

The ugly loss to SMU necessitates a good week from Vanderbilt with a break for exams on the horizon. The Commodores will host Temple on Tuesday night and Loyola Chicago—a Sweet 16 team from a year ago—on Friday night. Temple is ranked No. 134 in KenPom and has losses to USC, Clemson and Boise State already this season. If Vanderbilt has postseason aspirations, it is simply a must-win at this point.

As for Loyola Chicago, it feels like the Commodores are in need of a “steal” at home in this one to even out the VCU and SMU losses. The Ramblers might be the best team Vanderbilt will play in their out-of-conference slate and have been very competitive in a 7-2 start to the season, with losses to just Michigan State and Auburn in the Bahamas over Thanksgiving. Here’s what I wrote about the Ramblers in my preseason schedule preview:

“The Ramblers are fresh off another Cinderella March Madness run after making it to the Sweet 16 in 2021, defeating No. 3 overall seed Illinois along the way. KenPom rates the Ramblers at No. 32 in the country heading into the season, best in the Missouri Valley Conference (MVC). However, famed coach Porter Moser left this offseason to take over the Oklahoma job from Lon Kreuger. In his place is the 30-year-old Drew Valentine—brother of former Michigan State Spartan Denzel—who will be the youngest head coach in Division I this season. The Ramblers return starters Lucas Williamson, Keith Clemons and Braden Norris from their Sweet 16 team and feature a whopping 11 upperclassmen on the roster. This game is the second in three years between these squads—Loyola defeated Vanderbilt 78-70 at the Footprint Center in Phoenix, Arizona, in 2019.”

All of that remains true, and the matchup is perhaps even bigger now than I anticipated in October. The Ramblers have seen tremendous in-season success, winning two of the last three Missouri Valley Conference regular season titles. They’ve also amassed two Sweet 16 appearances in that time. If the Commodores want to take a page out of their book and make a run to March, it’s going to take a successful week in which Stackhouse figures out some of the issues that have ailed Vanderbilt against VCU and SMU, sans Chatman and Robbins.

If Chatman returns for even Friday’s game against Loyola, the Commodores chances, of course, improve. But Vanderbilt has put themselves in the position where they are going to need to compete, with or without him. Whether they do or not will certainly tell us more about this team as we head into the holidays.