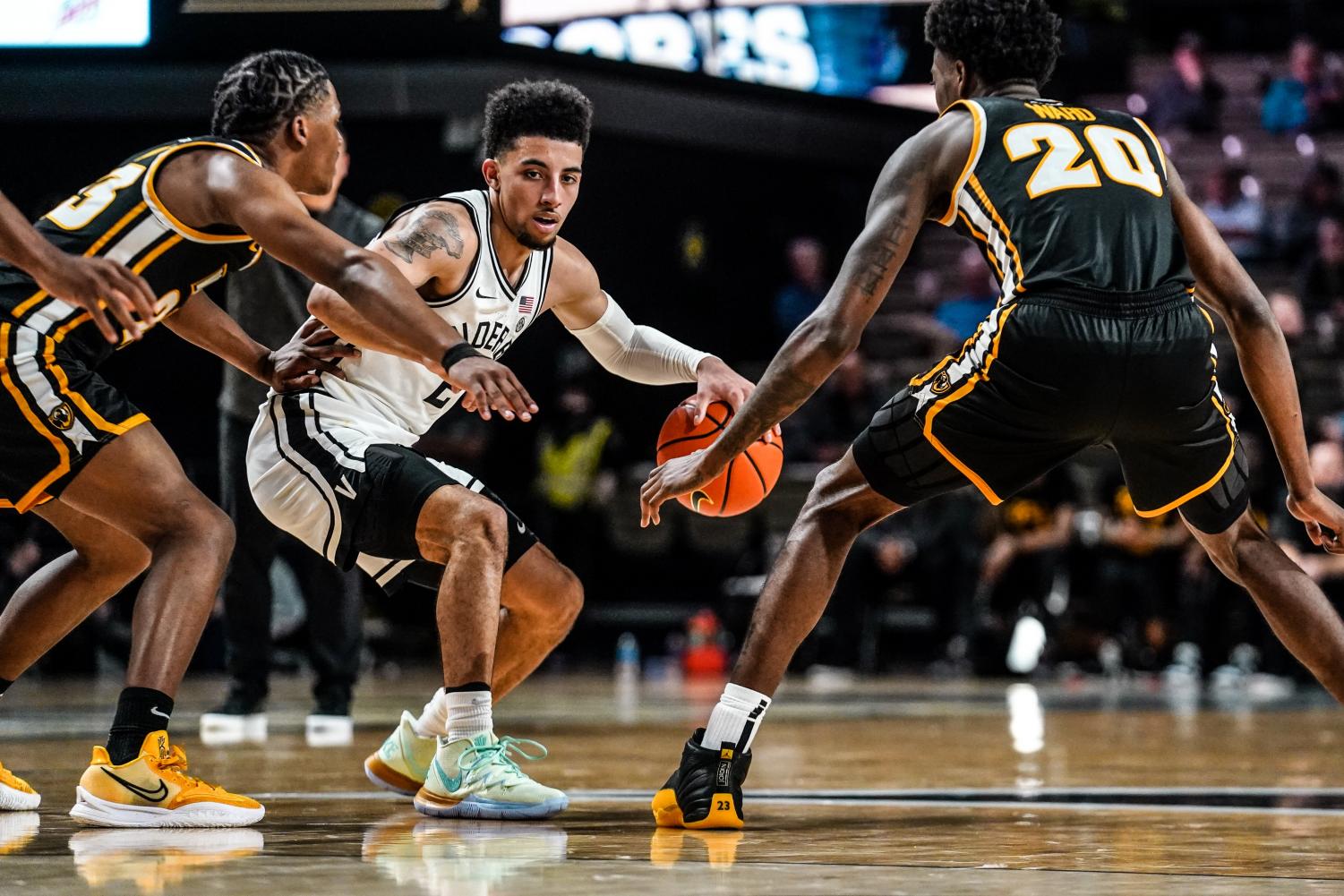 Scotty Pippen Jr. dribbles against VCU in Vanderbilt’s loss to the Rams on Nov. 17. 2021. (Vanderbilt Athletics)

After consecutive 19-point victories in their first two games of the 2021-22 season, Vanderbilt men’s basketball laid an egg against VCU on Wednesday. Was that performance an anomaly or indicative of bigger issues?

After this fall’s first Commodore Brunch delivered a very sour taste, it’s a shame that our first Memorial Minutes column of the winter will have a similar spin after a 48-37 loss for the Vanderbilt Commodores against VCU (yes, you read that correctly).

If you are new to Memorial Minutes, welcome. For both the men’s and women’s basketball teams, we will be publishing columns every three or four games recapping the events of the week. This year, we will begin with the men’s side.

The Commodores put a beatdown on two mid-major opponents in Alabama State and Texas State in their first two contests before—well, before scoring 37 points last night against the Rams.

Those 37 points were catalyzed by just 2-of-25 shooting from downtown, as the Commodores let VCU’s manic playstyle dictate the night and found themselves in sub-40-point territory—their lowest scoring effort since a pair of 33-point outings against Arkansas and Marist in 2012-13.

“They sped us up. They got us to have some turnovers, which really fueled their offense,” head coach Jerry Stackhouse said after the game. “It didn’t really hurt what we were doing offensively. I thought we still got the looks. We just didn’t make shots.”

They certainly didn’t make shots—that much is clear. But was yesterday’s game a sign of bigger issues for this team? Maybe. But I’ll do my best to take an objective look as we are just three games into this young season. That and more to come in our first Memorial Minutes of the year.

Historically, the Commodores boast a solid 27-16 record against A-10 foes. But since 2015, Vanderbilt is now 1-6 against A-10 teams, with losses to Richmond, Dayton, a 1-1 split with Davidson and now, a crushing defeat to VCU.

The quickest rationalization for yesterday’s loss was simply poor shooting. As I mentioned already, the Commodores were absolutely abysmal from beyond the arc, which is traditionally their go-to source of offense. Since the 2010-11 season, Vanderbilt has shot under 10 percent from the 3-point arc just once. And I don’t think you need me to remind you when that was.

I’ll just say it: this won’t happen again. Under Stackhouse, Vanderbilt had made at least four 3s in 42 consecutive games going into last night and the poor shooting effort was not necessarily a result of bad looks. Feast your eyes on some of the open attempts that proven shooters like Trey Thomas, Scotty Pippen Jr. and Myles Stute bricked.

“I take solace in the fact that we got good looks from guys that we feel confident can knock down shots,” Stackhouse said. “I thought guys were wide open on a lot of shots. We did get the looks that we wanted.”

The Commodores did find open looks, but if you watch the clips above, you will notice that many of the looks they got were not a result of Stackhouse’s refined offense that we have so often documented. Rather, they were thanks to VCU turning the game into a track meet and attempting to keep Vanderbilt out of its patented sets.

The Rams sped the Commodores up, forced them into quick shots, double-teamed Pippen Jr. and as a result, many of Vanderbilt’s shooters found themselves in places they aren’t used to being with shots that weren’t in rhythm. While the misses aren’t as concerning, this fact is, VCU dictated the pace and style of the game and Vanderbilt was unable to overcome that.

This falls on both Stackhouse and the players. Almost no Commodores delivered positive individual performances, but ugly losses fall most squarely on a team’s best players. And that starts with Pippen Jr.

The preseason SEC Player of the Year had by far his worst game in a Vanderbilt uniform, tallying just eight points while shooting 2 of 10 from the field. He was double-teamed or blitzed in pick-and-rolls all night long, resulting in five turnovers to just two assists—an indication of a larger theme at play.

Last season through three games, Pippen Jr. had tallied 12 assists in just 90 minutes en route to 4.9 per game for the season. This year, he has just seven assists in 93 minutes en route to just 2.3 per game with, arguably, better talent around him. Of course, this is a very small sample size, but I do think it indicates something about how Pippen Jr. has played—and it seems that Stackhouse agrees.

“Other teams are going to have that kind of approach to Scotty where he has to trust [teammates],” he said after the game. “He just has to accept that it’s not going to be his night. I think he held onto some possessions a little longer than he should have when he could have got off of it, and we had some advantages on the weak side.”

For as marvelous as Pippen Jr. was against Texas State, he does need to trust his teammates more. He’s been head-down, determined to get to the rim quite a bit this season, but once bigger and more athletic teams come around, like VCU last night, that won’t be as sustainable.

But the other half of this is that Stackhouse has to have his team better prepared for that kind of pressure, and this comes back to the play-style of A-10 opponents. Last year, Vanderbilt took ugly losses to both Richmond and Davidson—two teams that are incredibly fundamental and run complex, motion offenses. This year, Stackhouse scheduled VCU, a very weak offensive team with another niche: a havoc-wreaking defense.

Maybe scheduling A-10 opponents is purposeful—they challenge Vanderbilt in different ways on both ends—but they are certainly bad matchups for the Commodores.

This year counts for more than development and getting challenged; it counts for wins. Progress needs to be made, and although Stackhouse came out on Tuesday and discussed taking care of the ball and controlling the pace, the Commodores didn’t do that. And that largely falls on his shoulders.

Shorthanded but Not Counted Out

“We know that we’re a good offensive team. We’ve got good offensive players,” Stackhouse said after the loss to VCU. “Two of them that we’re counting on as starters aren’t even in the mix right now. So we’re not broken by any means.”

Both of those sure-to-be starters are more experienced than every other player on the Vanderbilt roster and Chatman’s ability to handle the ball would have certainly been useful in yesterday’s loss. But the reality is these two will likely be out for at least another couple weeks and Vanderbilt needs to be able to win without them.

Through two games, they did just that. Sure, it was against lower-tier opponents, but the execution was good and Stackhouse got contributions from numerous places, which is the difference between this year’s squad and years past: this team has numerous guys who can put it in the basket.

The big concern for this group minus Robbins and Chatman was defense. But Pippen Jr., Wright, Stute and others have shown a commitment to their physical fitness which is directly translating into better defensive results (reference Vanderbilt’s plethora of big dunks this season for evidence).

Thus far, the Commodores have forced 24, 14 and 22 turnovers in their three games. Vanderbilt forced 20 turnovers just once all of last season—even against their lower-level opponents. Shooting wise, the Commodores have held teams to just 39 percent from the field, with VCU connecting on a horrendous 33 percent of their shot attempts yesterday.

“I thought we did some good things on the defensive end [against VCU],” Stackhouse said. “Most nights I come in here and I look [at the box score] and we hold a team defensively to 32 percent shooting, around 30 percent from 3 and they only shoot 60-something percent from the line, you feel like we would win that game.”

The recipe for this team is balance on offense and cohesiveness on defense and it will continue to be once Chatman and Robbins enter the fold. The returnees have shown improvement defensively while other contributors—including the freshmen as they get more comfortable—will begin emerging as scorers at the other end.

Before yesterday’s loss, Vanderbilt could have feasibly entered a contest with SMU on Dec. 4 at 6-0, considering they have three opponents outside of the KenPom top 150 up next. But now, questions certainly have arisen about this squad.

Winthrop, Pittsburgh and Mississippi Valley State are up next on the Commodores’ slate and all the sudden, a contest at Pittsburgh on Nov. 24 seems much more meaningful.

While Winthrop exploded for a very impressive 23-2 season last year, the Eagles didn’t play a single major conference opponent all year. They have already dropped a game to Middle Tennessee and are scoring a measly 99 points per 100 possessions. Mississippi Valley State is a team Vanderbilt dominated last year and should not pose an issue—they are currently KenPom’s worst rated team. But a battle with the Pittsburgh Panthers is now certainly up in the air.

The Panthers have already lost a pair of games to West Virginia and The Citadel and are averaging just 60 points per game. The key to this game will be how the Commodores play on the road. A road victory against a Power Five opponent is nothing to scoff at regardless of the opponent, and after a wake-up call against VCU, this game will be a chance to restore supporter confidence.

“They came in a little bit more desperate, a little more hungry than we did,” Stackhouse said of VCU. “It’s a good wake-up call for us to know that we have to get back to work and we have to get better at some things.”