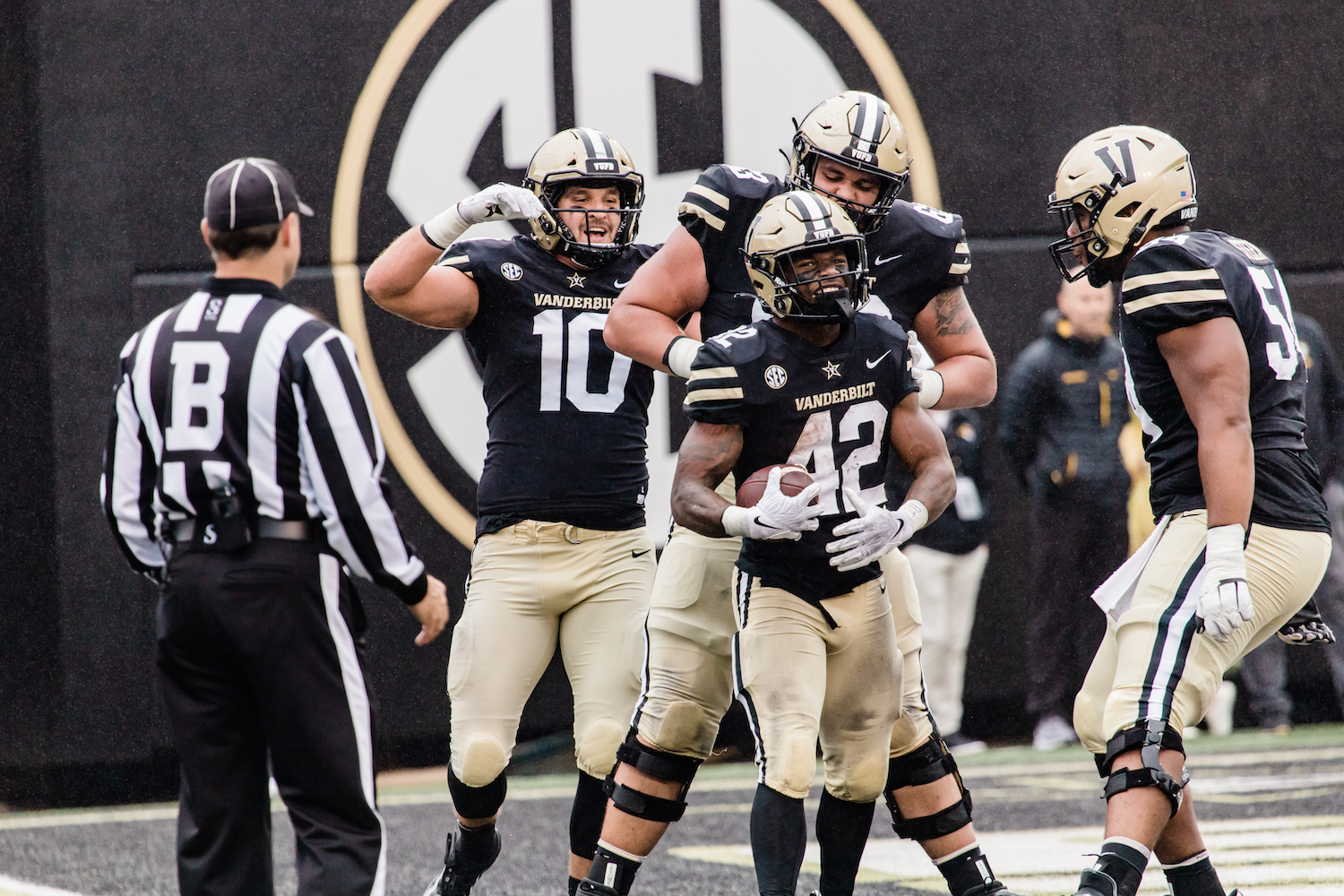 Commodore Brunch Week 9: One Trick, but No Treats

In their final game before the bye week, the Vanderbilt Commodores dropped another SEC contest largely thanks to a massive shift in momentum late in the first half due to a botched trick play.

Vanderbilt entered Saturday’s game against Missouri 742 days after they impressively upset the Tigers in 2019. Recreating that fateful day—a gloomy and grey homecoming Saturday in Nashville—was the goal for head coach Clark Lea and the Commodores. But that result simply wasn’t to be, as Vanderbilt dropped yet another SEC game, 37-28.

For eight games up until Saturday, creating momentum had been Vanderbilt’s Achilles’ heel. In six of eight contests, the Commodores had surrendered opening-drive touchdowns despite winning coin tosses in four of those games. Saturday’s script began very similarly—the Commodores deferred and gave up 10 points to begin the day.

But something changed late in the first quarter: the Commodores found a big play. A 69-yard scamper from Mike Wright lit up the Commodore sideline before Cam Johnson finally escaped his four-game touchdown purgatory with a quirky shovel pass score to cut the Tiger lead to three. From that point forward, until less than a minute remained in the second quarter, Vanderbilt had all of the momentum.

For nearly 21 minutes of game action, Vanderbilt held the Tigers scoreless while capitalizing on their dreadful rush defense that ranks second-to-last in the entire FBS in yards allowed per game (286.6). Running back Patrick Smith added a refreshing dynamic to the Commodore rushing attack in place of the injured Rocko Griffin and pass game coordinator Joey Lynch—to his credit—had a solid offensive gameplan.

Then, one tactical error flushed that momentum down the drain. Instead of attempting a 52-yard field goal with 22 seconds on the clock, Lea drew up a fake on fourth-and-7 in which the holder, Harrison Smith, tossed the ball over his head to a running Joey Bulovas. Needless to say, the play went awry, giving Missouri 15 seconds to do something from their own 39. And what do you know, in true Vanderbilt fashion, they did more than something.

“It was a long fourth down that was right on the fringe of where our [field goal] range is. So with the conditions and taking that into consideration, we had a fake that we wanted to run against them on the left hash, and we had the look we wanted,” Lea said. “Unfortunately, it didn’t work.”

Perhaps the most momentum that the Commodores have had during their SEC slate evaporated faster than you could say ‘Trick or Treat’ as Missouri quarterback Connor Bazelak lofted a 45-yard Hail Mary up to his 6’5” wide receiver Keke Chism to give the Tigers a halftime lead that they would not relinquish.

“We had the receiver bracketed in the end zone. We have to have somebody go up and play the ball, knock it down. Their guy was able to get up and grab it at the highest point,” Lea said. “It was a disappointing swing that ultimately, we had the chance in the second half to erase. So don’t want to linger too long on it.”

Halloween had not even arrived, but the Commodores’ head man drew up the ultimate trick and it backfired. The Hail Mary should never have been completed. Vanderbilt should have left the field at halftime leading an SEC game for the first time since their 2019 meeting with the Tigers. But by doing something wacky, Lea opened the door for a potential momentum swing.

To those that defend the fake call I ask, what was the best case scenario if all went right on that play? In my mind, the best scenario is that Bulovas picks up a first down and cuts a 52-yard field goal to a 45-ish yard field goal. With no timeouts and less than 15 seconds on the clock, Vanderbilt would have no choice but to attempt a difficult field goal anyway.

If you haven’t noticed, Halloween puns are the theme of this column—hope that doesn’t scare you away.

Vanderbilt truly looked like it belonged with Missouri for most of Saturday’s game. By no means was this a textbook football game—both sides showed why they are in the cellar of the SEC East—but the Commodores came out with a sound game plan: attack Missouri’s deficiencies.

With Ken Seals out once again, it was Wright under center and he did about all you could ask of a guy who is a limited down-the-field passer. The Commodores ran a unique blend of read option plays and straight running sets, ultimately keeping it on the ground 37 times as opposed to 28 passing attempts. They were able to do so because they were never trailing by more than 10 points. Far too often we have seen the Commodores forced into throwing the ball because of the score. That wasn’t the case on Saturday.

After Patrick Smith’s first three rushes of the game went straight up the middle for little success, the Commodores adjusted, sending him out wide and opening up their option packages.

“Early on, it felt like they were packing everything so tight in the box that we needed to do something to loosen them up,” Lea said. “That started with Patrick Smith getting a run on the perimeter where he broke a tackle, and I thought from there we used the option game and some other things too just to loosen up.”

Props to Lynch and the coaching staff for the adjustment because it paid huge dividends. Despite being down Griffin and lead running back Re’Mahn Davis, the Commodores gashed Missouri for 258 yards on the ground—including seven rushes for 10 or more yards.

“I thought that at times our offensive line was able to win at the point [of attack] which helped our run game between the tackles,” Lea said. “That’s a place where we’ve struggled the last few weeks. We were able to get some punctures in our inside-zone game, and I thought Mike did a nice job.”

It seemed like this was one of the first weeks that the staff really was able to embrace Wright’s best assets as a quarterback. He wasn’t forced into tough throws, they discovered the option game, they used shovel passes advantageously, and the Georgia native was able to find a few big holes to really keep the game in reach. There was a creativity present this week that has been lacking in weeks prior.

Alongside him were two guys who Commodore fans probably did not expect to see the field much at all this season in Smith and James Ziglor III. Ziglor came to Vanderbilt as a defensive back and was not even expected to be used in the backfield. But props to both of these youngsters; they combined to rumble for 111 yards on 22 attempts.

“We wanted to establish the run game,” Wright said after the game. “Hats off to Patrick Smith and Jay Ziglor. That’s two true freshmen right there taking on a role. I’m proud of those two guys right there. They ran their butts off, they got some dirty yards here and there.”

Building off of an impressive performance on the ground will be key as Vanderbilt gets set to host No. 18 Kentucky.

Milky Ways From a Win

The reality of this second pun is that the Commodores are indeed a ways away from beating quality opponents. As I wrote about two weeks ago following a loss to South Carolina, Lea and the Commodores will likely have to suffer through several more narrow defeats before coming out on the better side. This is a young and depleted roster and an even newer coaching staff—both groups are learning and adapting on the fly.

Kudos to the staff for modifying their offensive strategy during Saturday’s game—it was well catered to Wright and the personnel. But there are plenty of other glaring issues that this team continues to run into.

Firstly, Vanderbilt continues to be incredibly undisciplined when it comes to penalties. While only committing five total on Saturday, two of them occurred on Missouri’s first drive of the fourth quarter. An offsides by Daevion Davis followed by a rare defensive delay of game from Anfernee Orji—both on third down—helped the Tigers mount an 11-play, 41-yard drive capped by a field goal that made it a two-possession game.

After amassing an egregious 24 penalties for nearly 200 yards in their first three games of the season, Vanderbilt hasn’t totaled more than five in a game. But the timing of many of the team’s infractions—specifically against UConn and this week—has been quite punitive.

“If we get them in third-and-12, we need to force them to play third-and-12. If we get them to third-and-seven, we need to force them to play third-and-seven,” Lea said. “What we’ve shown in those situations is we’ve been able to pressure the quarterback, we’ve been able to intercept the football. But when we do things that show a lack of discipline and let them off the hook, that’s not going to be conducive to success.”

Secondly, Vanderbilt’s punting has been far from adequate the last few weeks. Flipping field position against SEC opponents should never fly under the radar. But punter Harrison Smith helped Missouri set up shop near midfield with punts of 30 and 24 yards in Saturday’s loss. He averaged just 30 yards per punt on the day.

Once again this week, Lea has Smith consistently using a low, running, rugby-style punt. But the results have been far from successful as Smith’s average yards per punt has trended downwards most of the season—not to mention one of his attempts was brutally blocked in the second quarter.

These are small areas that are not difficult to clean up. But they have to be addressed if Vanderbilt wants to pull out an SEC victory anytime soon.

Sweet Time for a Bye

After their fourth consecutive conference loss of the season, the Commodores will now enter a bye week. And wow could it not have come at a better time for this squad. Vanderbilt has three games remaining: No. 18 Kentucky, No. 15 Ole Miss and Tennessee to close out the 2021 slate and they obviously show that the easiest of Vanderbilt’s contests are behind them.

In addition to Griffin and Seals, starting guard Ben Cox was out for Saturday’s game. De’Rickey Wright is also still battling back from an off-the-field conduct issue. All four of these players are starters and will be needed even more when No. 18 Kentucky rolls into Nashville on Nov. 13.

Lea confirmed after the game that he expects Griffin to be back following the bye week, but Seals’ status will continue to be the one Commodore fans eagerly monitor. Perhaps the biggest question is, even if Seals is healthy and ready to go, should he get the nod?

“Your personality shifts with the personality of the quarterback at times,” Lea said of his team’s offense after the game.

I just spent over 500 words discussing how Wright finally had a good game plan behind him this past weekend after a number of weeks in a platoon or backup role. Will Lea shift his team’s personality again in favor of Seals?

Only time will tell.