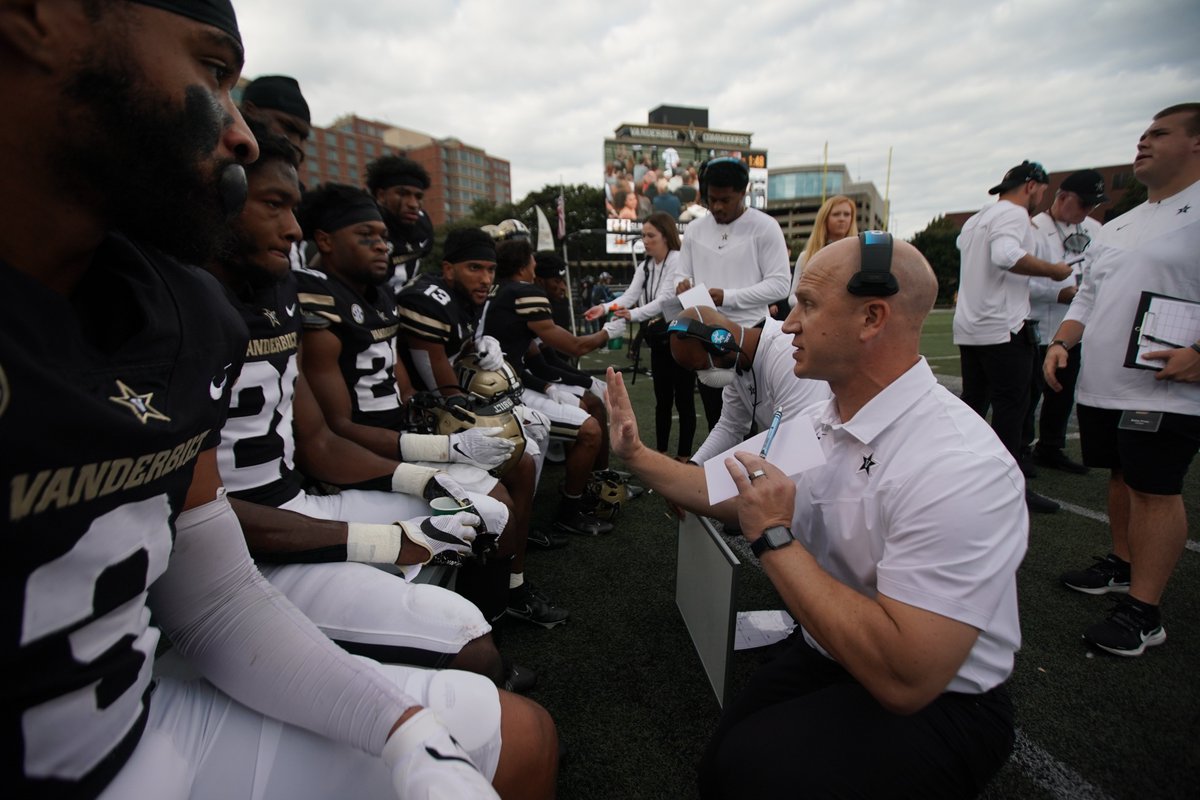 Mississippi State and the “Air Raid” got the best of the Commodores on Saturday as the Bulldogs notched over 500 yards and handed Vanderbilt its third loss of 20-plus points this season.

Tell me if this scenario rings a bell.

You know that Vanderbilt is set to play, but you can’t quite tune in right at the start of the game. By the time you sit on your couch and turn on the game, the Commodores are trailing 7-0 despite it being only three minutes into the game.

Odds are this has happened to most Vanderbilt fans at one point or another this season, as the Commodores have now surrendered six opening-drive touchdowns to opponents. The story was no different in Saturday’s 45-6 loss to Mississippi State.

Head coach Clark Lea’s team has actually won five out of eight coin tosses this year—including against the Bulldogs. Each time, the Commodores have deferred possession to the second half. Each time, that has come back to bite them, with four drives resulting in touchdowns on the opening possession and one resulting in a field goal.

The issues were vast and plentiful for the Commodores in Saturday’s loss, but the mood seemed to immediately shift after Will Rogers led the Bulldogs on an immediate 8-play, 79-yard drive in just the first three minutes of the contest.

“We’re disappointed,” Lea said after the loss. “We all work hard. The kids work hard. We work hard to attain results, and when you fall short, it hurts. It hurt last week. It hurts this week. I think any time that you’re building something, any time that you’re young into that, you’re going to go through the throes, the highs and the lows. But there’s a better game out there for us today. We have to go actualize it, and we didn’t.”

Not being ready to play? A poor defensive gameplan? Poor decision-making? Maybe all the above. But regardless, being scored upon first is a trend that is just so demoralizing. A trend that sets the Commodores up for failure every single week. A trend that simply amplifies the hole that Vanderbilt already is forced to play out of in the SEC.

Brunch this weekend is traditional. Many of the same offensive struggles continue to plague this team. Much of the same size and speed deficiencies on the defense continue making big plays for opponents possible. And the officials—well, we will get to that later.

Mike Wright earned his second consecutive start this week as Ken Seals continues to battle a hand injury. After helping generate explosive plays last week against South Carolina, Wright and the Vanderbilt offense had exactly one explosive play all evening: a 61-yard strike to Devin Boddie Jr. in the first quarter.

That single pass accounted for nearly 40 percent of Vanderbilt’s entire offensive production in the game. One pass. 40 percent.

Mississippi State entered Saturday’s game allowing a whopping 44 yards per opponent drive while forcing three-and-outs on only 15 percent of opponent possessions. Those marks rank third and second to last respectively in the SEC, but you wouldn’t know that from watching Saturday’s game against Vanderbilt.

The Commodores totaled just one drive over 25 total yards. They also notched three three-and-outs and seven punts along with their measly 155 total yards.

What was the crux of the issue for Vanderbilt? Well, a number of things. But none bigger than their inability to pick up yardage early in offensive possessions.

The Commodores ran just 11 offensive plays in the first half and 42 total in the game. That was in large part a factor of poor early-down execution. In fairness to Mississippi State’s defense, they are rather stout against the run and spent all day Saturday prohibiting Rocko Griffin and Patrick Smith from establishing any rhythm on the ground. But the Commodores almost immediately abandoned the run, only handing the ball off eight times as opposed to 25 pass attempts.

“We weren’t able to get the run game going,” Lea said. “Whether that’s blocking on the perimeter or blocking inside, we’re trying to build a package around our strengths and trying to limit the weaknesses of the places where we know we don’t have an advantage.” 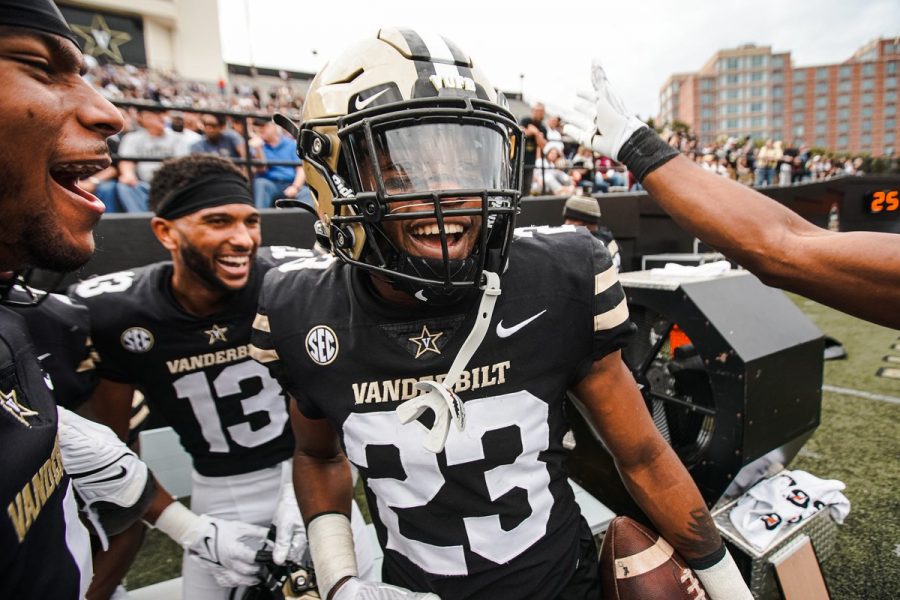 Those 17 rushing attempts were mostly boring, inside-zone handoffs. Smith, who has impressed early on in his Vanderbilt career, is clearly best on the outside when he is in space, but was given no opportunities to get into space on Saturday.

Under center, what is starting to show is that Wright favors scrambling over making a tough throw. However, his ability to do so was very much taken away by the Bulldogs. He frequently avoided throwing when on the move, thus settling for three and four yard pickups via his legs.

“As far as the pass protection goes—and it’s hard sometimes just off the field—there were certainly plenty of times where I felt like we had time to make a read where maybe we weren’t able to get the ball out and so we end up scrambling out,” Lea said. “It starts with the coaching. We feel responsible for those guys out there. We feel like their performance is a reflection on our preparation, so we have to be better on our end too.”

After a unique approach paved the way for a competitive game last week, this week’s offensive play calling was vanilla. With the exception of a nifty Ben Bresnahan screen that initiated an eight-yard gain, almost everything play caller Joey Lynch dialed up was unsuccessful and uninspiring.

And to make matters worse, linebacker De’Rickey Wright—who I wrote about as a bright spot over the past couple weeks—did not play due to off-the-field issues.

Truly nothing went right for this team on Saturday.

The biggest positive in the Commodores most recent loss was no doubt the play of cornerback Jaylen Mahoney. The junior had his best game in the Black and Gold against Mississippi State, leading the way from a playmaking standpoint with an interception and a team-leading 10 tackles. He also had a key deflection—a near interception—that should have forced a Bulldogs punt if not for a roughing the punter penalty.

“I felt like I got robbed on that one but it is what it is. It’s still a good play on that third down, getting off the field and setting up a punt,” Mahoney said after the game. “We just need to get back on the film and learn from our mistakes that we made today.

Mahoney has now racked up three games of seven or more tackles and has tabbed two interceptions and four passes defended. His play has been a refreshing sight for a Commodore secondary that has taken quite a beating this year.

Despite his outstanding play, the Commodores were absolutely gashed for 524 total yards and six touchdowns. Vanderbilt’s defensive unit was forced to be on the field for nearly 40 minutes of game action and went up against 87 Mississippi State plays. That is not a recipe for success against head coach Mike Leach’s ‘Air Raid’ which, in theory, is supposed to rely on quick, long-hitting drives.

“What we experienced tonight is the breakdown of the complementary aspect of football,” Lea said. “It’s totally unacceptable for us to play 50 snaps on defense in the first half. That’s never going to be a formula here for success.”

The Commodores entered the contest with a clear strategy centered around keeping the ‘Air Raid’ in front of them. They allowed check downs and underneath routes ad nauseam while bringing three and four man rushes and dropping a number of different players. The strategy—a bend but don’t break approach—actually worked fairly well for more than a quarter of game action.

Holding the Bulldogs to ten points in the first 20 minutes of the game was about as much as Lea and the Commodores could ask for. But as the offense continued to force the defense back onto the field, the Commodores clearly lost steam and eventually broke—as any defense would when going up against that many plays.

The ironic thing about this year’s defense is the increase in playmaking. Vanderbilt now boasts the second-most interceptions in the SEC with 10 so far this season. But the big play continues to hurt this group. There is perhaps no other position where Vanderbilt’s size and speed disadvantage has been so obvious.

I hate discussing officiating, but considering the discourse on this topic, this just had to be tackled (no pun intended).

As I sat in the press box yesterday, I watched tweet after tweet roll in lamenting Vanderbilt’s alleged poor treatment from SEC officials, mostly in response to the overturned Mahoney interception.

Despite being called an interception on the field, the officials wiped away the junior’s possible second swipe of the game. They deemed that the ball hit the ground as he attempted to complete the catch.

This was a big development. At the time, Vanderbilt was only trailing by seven and would have gotten the ball at midfield. Instead, after an egregious roughing the punter penalty on the ensuing play, Mississippi State walked into the end zone for its second touchdown of the day just minutes later.

Nonetheless, this was not a conspiracy against Vanderbilt that wiped that play off the board; the SEC is not calling in mid-game from Birmingham telling officials to give Vanderbilt’s opponents the calls. Athletic director Candice Lee can’t turn the tides of how Vanderbilt is officiated with one conversation with the league office, and Vanderbilt is not subject to different officiating than the rest of the league.

What Vanderbilt is subject to—as is the entire SEC—is poor officiating overall. And that’s what was on full display on Saturday—an objectively poor officiating performance. Every single game, every single moment on Saturdays and Sundays, hundreds of officiating mistakes are made; it’s a tough job. Above all, the rules for things such as catches and pass interference are so poorly defined and taught that errors are inevitably made.

Every fan base in the country thinks officials have it out for their team. That’s just fandom. What is different for Vanderbilt—a program with such little historical success—is that each bad call means a little more. Alabama fans don’t have to rant about the poor officiating that they have also been subject to, because they have 18 national championships. The negative emotion that comes from bad calls outweighs the very minor highs that Vanderbilt fans have ever been provided. The negatives simply stick out.

I truly have no answer as to how Bresnahan’s 10-yard gain was reverted to an eight-yard gain—that was beyond much of what I’ve ever seen watching football. But at that point in the game, when Vanderbilt was already trailing 24-3 and on its way to another loss, do you really think the SEC dialed in and said, “give him only eight yards, not ten?”

Because that would surely have made a sizable impact on that game.