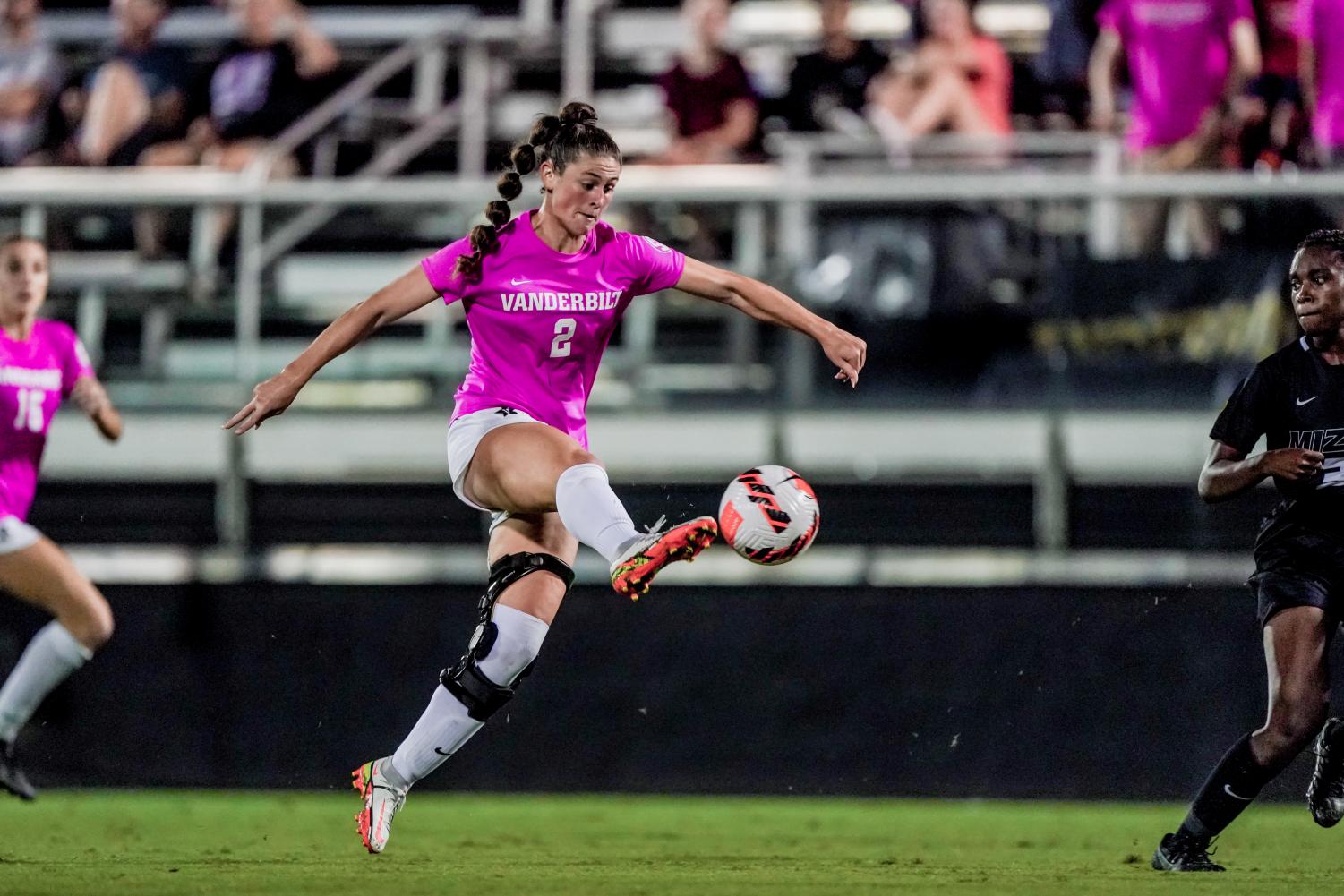 Vanderbilt forward Peyton Cutshall makes a play on the ball in a game in October. (Vanderbilt Athletics)

After being sidelined for 18 months by two consecutive knee injuries, senior forward Peyton Cutshall is finally back on the field.

Early in her sophomore season, running down the field at Arkansas, Vanderbilt forward Peyton Cutshall made a cut and tore her ACL, MCL and meniscus—a reality that would worry, frustrate and even devastate just about any athlete. Recovery from an ACL surgery entails months of heavily-involved rehab during which an athlete cannot play the sport she loves.

Eight months after her surgery, Cutshall was sent home for COVID-19 along with the rest of the Vanderbilt student body. Early in the summer of 2020, she was cleared to get back to participating in basic ball work, and attended a clinic for college players hosted by her club coach in her hometown near Houston. She was running down the field when her knee buckled, but Cutshall didn’t feel the same pain she felt with her first injury.

After monitoring symptoms for a few days, she went into surgery without actually knowing exactly what had happened. When she woke up from the procedure, she saw a brace on her leg, just like the first time—she had re-torn her ACL 80-percent.

“It was like a kick to the gut…Everything I had done in the last eight months, just down the drain. I was not okay to say the least,” Cutshall told The Hustler.

Cutshall, who had never had any major injuries before this, recalls that going through her first ACL injury, she learned how to cope.

She was looking at a year and a half without playing soccer—what dedicated athlete wouldn’t be distraught?

Adversity was not a novel experience for Cutshall. In elementary school, she lost her sister to a car accident, a tragedy that would stretch anyone’s capabilities for resilience.

“I’ve always prided myself on how strong I am as an individual,” she explained.

Cutshall kept this mindset throughout her soccer career as well, always trying to be the hardest-working player on the field which landed her offers from several Division I schools.

In a recent interview with the Hustler Sports 30 Podcast, head coach Darren Ambrose made it clear that he has always been impressed at how Cutshall has continued to display strength and determination through her two catastrophic injuries.

“The mental toughness that kid has—if I could bottle it and sell it, I’d make a lot of money,” Ambrose said.

Her second injury, however, made her question this strength, and she initially found herself overtaken by self-doubt. Cutshall recalled being unsure of her own abilities and worried about her future as a soccer player.

It didn’t take long for Cutshall to snap out of her spiral. Two days after she received her second diagnosis, she shedded her insecurity in favor of optimism. She researched the percentage of professional athletes that underwent two ACL tears, and found stories of other athletes who have faced similar situations. Realizing she wasn’t alone, Cutshall’s mindset of apprehension towards the future promptly shifted.

“No more pouting, no more crying. It’s go time,” she explained. “Do everything you did the last eight months except do it harder.”

Ambrose, who recruited Cutshall and supported her through her injuries,, continually took notice of her mindset translating into progress.

“Watching [Cutshall] do her rehab on the sideline all spring was inspiring. There were days when she left practice more tired than anyone else on the field, and yet she hadn’t been on the field.”

As she was recovering, her team had a remarkable season. In a conference schedule shortened due to the pandemic, the Commodores finished 4-4 in SEC play and 8-4 overall. The team found themselves seeded seventh in the SEC tournament in November of 2020. Vanderbilt went on to dominate in the tournament, shutting out No. 10-seed Mississippi State 4-0, upsetting No. 2-seed Tennessee 4-2 and beating No. 3-seed Texas A&M 3-1 to make it to the finals.

She jumped on the sidelines as Vanderbilt took down Arkansas in the championship match, the top-seeded squad and the same team against which she suffered her initial injury 14 months earlier. With the 3-1 victory, the Commodores became 2020 SEC champions. In addition, they set the conference record for most goals scored in a single tournament—for all 14 of them, Cutshall was running down the sideline with her hand out, ready to bless anyone she passed with a high-five.

“Being that cheerleader brought so much joy to me,” Cutshall recalls. “There were obviously moments where I was itching to literally get on the field or just touch a ball…But I think the joy took over that, and I knew that my time wasn’t now.”

She may not have played, but she shared in the victory just as much as anyone. She made it clear that there was no championship she had ever enjoyed more than the one for which she was on the sidelines. But now that she is back on the field, she is adamant that there is nothing else she’d rather be doing.

A right-footed player, Cutshall has also noticed that she’s gotten better with her left leg—that’s where she had her two ACL tears—and strengthening the left leg was a primary focus of her recovery program. Coming off an ACL tear, many athletes would carry back with them a more cautious play style, but not Cutshall.

“I think I’ve just found this new sense of happiness when I play,” she said. “I’m ready to tackle and slide and do all that stuff.”

After all, she hadn’t really been able to get physical on the field for 18 months. Ambrose has noticed this attitude as well, and has watched firsthand as it leads to improvements in her game.

“[Cutshall] is playing as well as ever now. She is really starting to find her feet,” he said.

Her goals for this season are just that: goals. She has already racked up three on 15 shots this season, with her most recent coming in the 14th minute of Vanderbilt’s eventual 3-0 win against Alabama. Naturally, she would also like to help her team win the SEC Tournament again, and staying faithful to her mindset of optimism will surely go a long way towards that cause.

Going forward, Cutshall has laid out loose plans to write a book on her experience. She wants athletes who will experience long-term, season-ending

injuries in the future to know that there is light at the end of the tunnel.

“As much as you think your life is just your sport, it’s not. There are people who love you because of who you are. At the end of the day, your mindset is what matters,” Cutshall said.“Honestly, it just feels good afterwards. You get to talk about something that you overcame, and you can’t do that if you don’t have a strong mindset.”

A little over two years after the initial injury, Cutshall will get her revenge game against Arkansas this coming Sunday. It’s the first meeting between the two schools since last year’s championship, and Cutshall is determined to win.