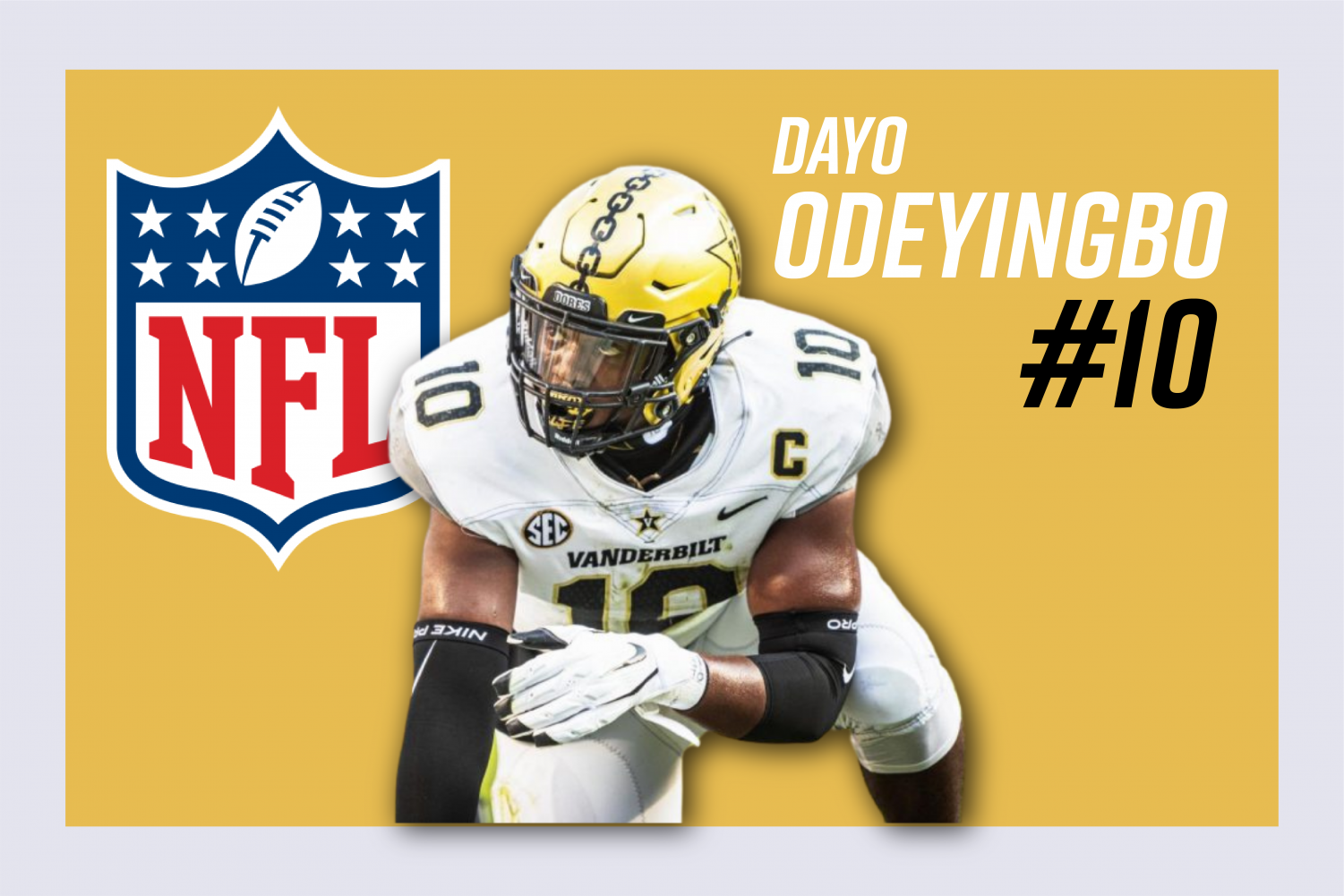 Following in the footsteps of his older brother, Dare, defensive end Dayo Odeyingbo committed to Vanderbilt back in 2017, making him the top-ranked defensive recruit in the signing class. Odeyingbo was tabbed a three-star recruit by both Rivals and 247 Sports, but ESPN had him ranked as high as a four-star, citing his unique combination of size, speed and strength. Years later, as Odeyingbo’s prolific four-year Vanderbilt career comes to a close, it’s easy to see why his size was so heralded.

The Irving, Texas native has been a stalwart of Vanderbilt’s defensive line the past few seasons. He finished his tenure ranked fifth in program history in tackles for loss (31), and notched 12 sacks and 22 quarterback hurries as well. Thanks to his unique athleticism and versatility—which, if asked, allows him to line up either inside or outside the tackles—he projects as a valuable, day two option in the 2021 NFL Draft.

Odeyingbo had a very productive season in 2020, despite garnering significant attention from opponents. He overcame frequent double teams and worked nicely alongside fellow NFL Draft prospect Andre Mintze. However, his senior season certainly didn’t go as planned, as Vanderbilt struggled and head coach Derek Mason was fired. Following this decision, Odeyingbo opted out of the season on Dec. 5 with one game left on the season (Tennessee) to prepare for the 2021 NFL Draft.

He may be one of the more valuable defensive prospects in the draft, but Odeyingbo’s stock has declined in recent months. On Jan. 24, The Athletic’s Dane Brugler reported that Odeyingbo suffered a torn achilles in training, which sidelined him for both the Senior Bowl and the NFL Draft Combine. Still, Odeyingbo will certainly find himself a new home this weekend. The only remaining question: where?

Odeyingbo didn’t get the opportunity to post results in the 40-yard dash, bench press or broad jump due to his achilles injury, which sidelined him for the Senior Bowl, Vanderbilt’s Pro Day and the NFL Draft Combine. Despite the lack of results, he still measures well in this year’s class of defensive ends. His 6-foot-6 frame is among the taller ends in the draft, and he has an enormous wingspan that enables him to disrupt plays.

Despite the fact that Odeyingbo and the Commodore defense did not have much to work with in 2020, he had perhaps his most productive season in the black and gold. Averaging four total tackles and one tackle for loss per game, he was the pillar of Vanderbilt’s defensive front. His performance as a senior was good for second-team All-SEC honors, and the stats merely tell half the story—most of his snaps saw Odeyingbo face double teams, often drawing attention that opened up holes for teammates like Andre Mintze.

Odeyingbo’s biggest strength is that there’s not much he can’t do.

In four years at Vanderbilt, he’s been asked to fill numerous roles, exhibiting immense versatility that should be coveted by NFL scouts. He has the ability to line up inside or outside the tackles, as was the case in 2020—per Pro Football Focus, Odeyingbo lined up for 208 snaps inside and 220 snaps outside the tackles. He’s most likely to line up inside in the NFL, which would require him to put on an extra ten-or-so pounds, but that shouldn’t raise too many concerns.

His versatility enables him to line up as a base end in a 4-3 defense, or a five-technique end in a 3-4 (though he played in far more positions in college). But part of what makes Odeyingbo such a versatile prospect is another strength: his size and athleticism. His 6-foot-6, 285-pound build makes him at least 11 pounds heavier than every other prospect in ESPN’s top-10 defensive end rankings, and his height makes him one of the tallest ends in the draft. With such great size, Odeyingbo is a tough assignment for any offensive lineman. He uses his physicality to overpower opponents; all the while, despite having such a massive frame, Odeyingbo possesses some serious speed that he’s flashed from the edges. Whenever the opposing offensive lineman is stagnant, Odeyingbo’s quick footwork enables him to get behind the line of scrimmage.

One of his most impressive, innate characteristics is that his wingspan is just over 86 inches. Yes—over seven feet long. If he can bulk up enough to become an interior presence in the NFL, that wingspan will be absolutely invaluable, as he can break up or disrupt passing plays with his arms alone. His arms also work to his advantage while rushing the quarterback, as he frequently displaces blocks with forceful arms. However, Odeyingbo can get behind the line of scrimmage with more than just strength and agility. He has flashed a few nice moves in college, with some of his most prominent plays coming from a swim move or an outside jab/inside shoot. Ultimately, he may benefit from adding a few more moves to his arsenal, but there lies a nice foundation for such an athletic end.

Lastly, Odeyingbo is never one to give up on a play. Throughout his collegiate career, he often ended a play on the opposite side from where he lined up, awarding him plays like his sack against Mississippi State where he recovered after being knocked to the ground.

Above all, Odeyingbo has every characteristic you’d hope for in a developing defensive end, though there’s some room for growth at the next level.

This one is certainly out of his power, but it needs to be stated nonetheless: Odeyingbo’s draft stock has taken a significant hit in the past few months, and it’s entirely due to his achilles injury. With such high upside, he could have gone as early as Round Two, but his torn achilles—an injury that in most cases, would require surgery—should sideline him for a significant portion of the 2021 season.

Aside from the injury, most of the areas in which Odeyingbo could improve seem to be minor, or more manageable aspects of his game. First and foremost, though he could line up either inside or outside, he will most likely be used on the interior—this would require him to put on a few pounds of muscle, as the interior presence in the NFL dwarfs that of the college game, even in a talented conference like the SEC. Aside from size concerns, Odeyingbo’s repertoire of block-evading moves could grow. The moves he uses are extremely polished, but he’ll need a few more at the next level. If he sticks with the few he used in college, as great as he was utilizing them, NFL teams will be able to gameplan for Odeyingbo by simply watching his film.

Lastly, the missed tackles simply must improve at the next level. It’s hard to identify the exact cause: in most cases, his form appears to be on par, but sometimes he struggles to bring down more elusive running backs, especially when they have room to flash speed. Odeyingbo missed 23 tackles in 109 attempts over the past three years, according to Pro Football Focus, and he’ll have to improve that aspect of his game in the NFL.

Odeyingbo is not a first-round pick like Jason Pierre-Paul was in 2010. He’s far from it. But Pierre-Paul entered the NFL as a physical specimen with extremely high upside, and the parallel between these two prospects—at least from a physical standpoint—is strong.

Much like Odeyingbo, Pierre-Paul entered the draft boasting immense athleticism for his size (at the time, he was around 6-foot-5, 270 lbs.). He had a quick first step, which enabled him to beat offensive linemen with speed. Additionally, with a massive wingspan, Pierre-Paul had very strong hands. Ultimately, he entered the draft with a similar build and skillset as Odeyingbo; pundits thought Pierre-Paul was capable of becoming a scheme-versatile defensive end, but he needed to bulk up just a bit.

The same goes for Odeyingbo: immense size, athleticism and impressive physical characteristics. He certainly would benefit from growing into his body a bit, just to adapt to facing NFL-caliber offensive linemen, but the frame is in place. Perhaps his ceiling is not as high as Pierre-Paul’s, but NFL scouts seem to love what he has in place.

The Saints need some serious help on the defensive line, and Odeyingbo can provide some long-term support. With Cam Jordan on the wrong of 30, Marcus Davenport potentially on the last year of his contract (that is, if the Saints choose not to exercise their team option) and a lack depth on the depth up front, they could very well look to take Odeyingbo—if not at No. 98, they can target him with their second third-round pick at No. 105. The pick makes sense, as Odeyingbo fills a need; more importantly, the Saints can afford to wait on Odeyingbo, should his injury keep him out all season.