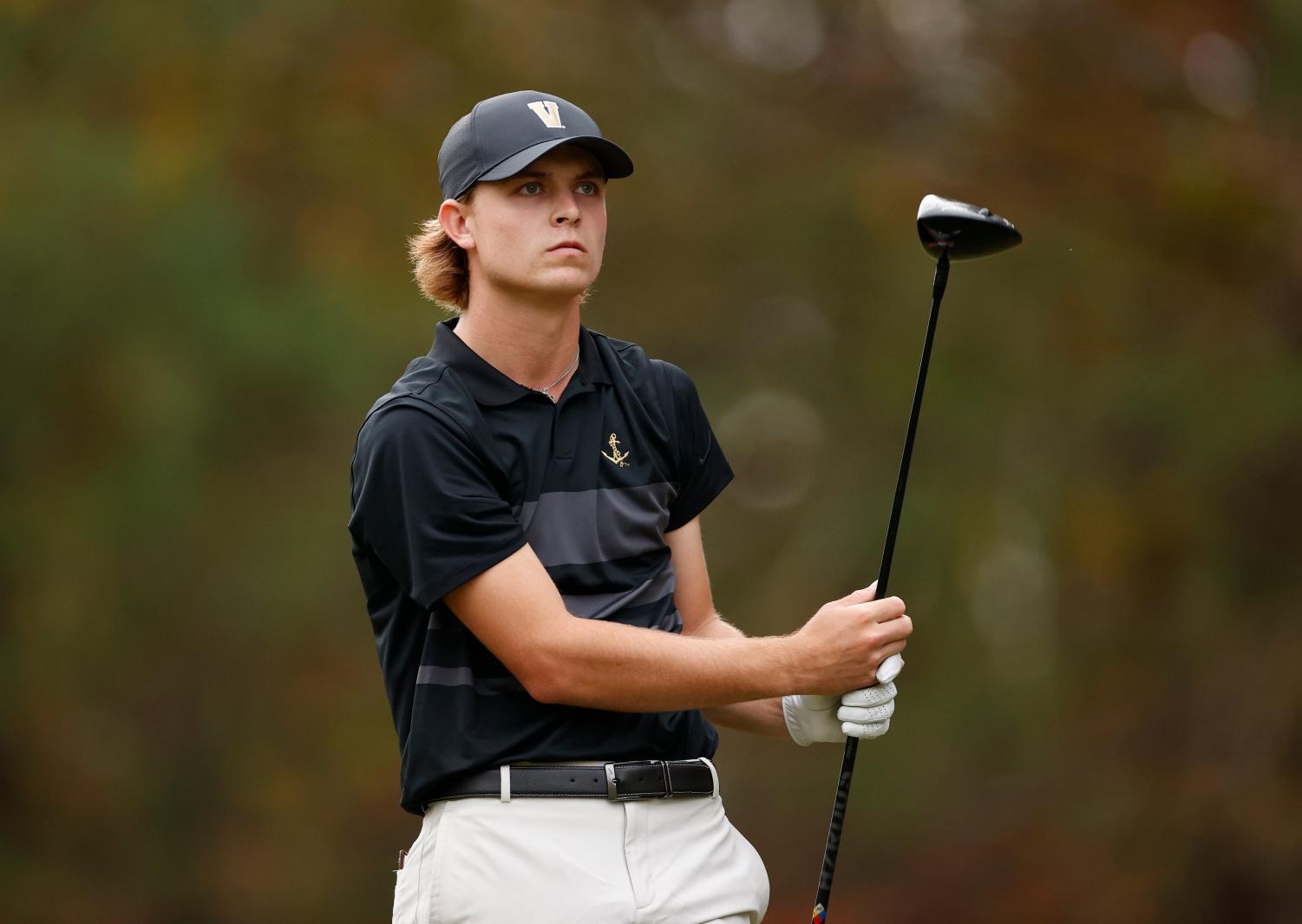 The sophomore has seven top-15 finishes and is one of best players in college golf.

When Vanderbilt men’s golf coach Scott Limbaugh visited Houston, Texas to recruit William Moll, then a sophomore in high school, Limbaugh realized he was scouting a player with a very advanced golf IQ for his age.

“We’d go watch him out in Texas—the wind blows strongly in Texas—and he understood how you want to hold balls, hold iron shots against the wind. Those are things we’re usually having to teach guys [at Vanderbilt],” Coach Limbaugh says.

“It’s one thing to shoot a golf score,” Limbaugh continues. “It’s a different thing to be 15-16 years old and know how to hit the correct shots at the right time.”

In Vanderbilt, Moll saw an opportunity to grow under coach Limbaugh’s tutelage and his expectations have come to fruition.

“I thought that I would be able to become the best golfer that I could under [Limbaugh],” Moll says. “The way we work here at Vanderbilt, is really beneficial to the players.”

Moll also cited his future teammates as a reason for committing to the program. He considers their leadership to have been very influential on him.

“Talking to [the upperclassmen] a lot [and learning from them], that’s a main reason for my improvement and consistent play this year,” Moll says.

As the highest-ranked recruit the program had ever signed at the time, Limbaugh trusted Moll enough to allow him to play every single event in the 2019-20 season. Last year, Moll played 22 total rounds as a freshman across eight events. While the Houston native finished fourth overall on the team in individual scoring for the season—averaging 72.64 strokes per round—he did not finish any events under par.

“Freshman year, I was a little uncomfortable with college golf and how everything works,” Moll says.

Moll’s first year at Vanderbilt was cut short due to the COVID-19 pandemic, just as he was beginning to thrive. The last pair of events he played, the Cabo Collegiate and the Desert Mountain Intercollegiate, were two of his best, as he finished T-22nd and T-11th, respectively.

With all the time that the COVID-19 quarantine provided, Moll dedicated his summer to developing his game. Moll credits his overall improvement to a revised routine that allows him to be more efficient in practice, while also citing a more focused approach to the sport.

According to Coach Limbaugh, it’s worked: he says Moll showed marked improvement when the team returned to campus in August.

“[Moll’s] gained some distance,” Limbaugh says. “He gained some speed. He’s improved his putting a lot. He worked really hard [over the summer].”

In the Commodores’ first event of the 2020-21 season, the Blessings Collegiate Invitational, it was clear that Moll was ready to take his game to the next level. He finished tied for sixth place and led the roster in scoring.

Moll has not looked back since, and Coach Limbaugh is not surprised at all by Moll’s level of play.

“He’s got what any coach would refer to as the ‘it’ factor,” Limbaugh says. “He gets his focus at the highest levels when that’s what’s demanded of him, and you can’t teach that.”

In just eight appearances during the 2020-21 season, Moll has finished inside the top-15 on seven occasions and inside the top-10 four times. He has led the team outright in scoring in five events and never finished worse than third on the team (which has only happened once). This season, he has shot -2 or better in all but two tournaments.

His sophomore year has been a remarkable combination of consistency and outstanding play. Moll’s performance is even more impressive considering he is just a second-year player, and one who dealt with a shortened freshman year and bouts of inconsistency.

“I think I’m more comfortable this year,” Moll says. “I feel that, mentally, it’s been really helpful in being more consistent this year.”

In their year-and-a-half as teammates, Moll developed a relationship with John Augenstein and mentions him as one of the older players that mentored him on- and off-the-course.

With the senior leader and four-time All-American’s recent departure, Moll is now leading a group of players that have stepped up in Augenstein’s absence.

“[Moll] understands that he’s got to be better for our team to be a good team,” Coach Limbaugh says. “And he’s taken ownership of that.”

After being just one of two freshmen on the roster last year, Moll has become a leader within the program and Coach Limbaugh has been impressed with his sophomore player’s development in this area.

“He keeps things light,” Limbaugh says. “But when it’s time to put your tee in the ground and play golf, you’re gonna get [Moll’s] best every time, and I love that about him.”

Similar to Augenstein, Moll is receiving national recognition for his play at Vanderbilt, as the sophomore was recently named to the 2021 Haskins Award Spring watch list.

Moll is one of just four sophomores on the 15-person list for the award, which is annually given to the men’s college golf player of the year.

“I think it’s a really cool thing [to be named to the list], and it’s cool to be on that track,” Moll says. “It doesn’t change much for how I should practice or how I should play.”

As the season winds down, Moll is prepared to continue his elite play. The Commodores just completed their last regular season tournament—the Country Club of Birmingham Invitational, where Moll finished tied for sixth place at +1. Next up for the Commodores are the SEC and NCAA Championships.

Coach Limbaugh views this final stretch as an opportunity for growth in Moll’s game and his role as a leader.

“The rest of this season is about his continued improvement and maturity,” Coach Limbaugh says. “He is a team-first guy, he’s a great teammate and he cares about the team and that’s what you want in a leader.”

Regardless of how the next few weeks play out, Coach Limbaugh knows that Moll is just getting started.

“I think our goal with William right now is he’s gotta understand his best golf is still in front of him,” Limbaugh says.

After the postseason tournaments were canceled last season because of the COVID-19 pandemic, Moll is ready to play in his first postseason for Vanderbilt. Focused on the challenge ahead, Moll echoes his coach’s attitude.

“We’re all just trying to get a little bit better every day and trying to be the best team that we can,” Moll says. “I would say the same goes for me personally.”

The Vanderbilt Hustler welcomes and encourages readers to engage with content and express opinions through the comment sections on our website and social media platforms. The Hustler reserves the right to remove comments that contain vulgarity, hate speech, personal attacks or that appear to be spam, commercial promotion or impersonation. The comment sections are moderated by our Editor-in-Chief, Rachael Perrotta, and our Social Media Director, Chloe Postlewaite. You can reach them at [email protected] and [email protected]
All The Vanderbilt Hustler picks Reader picks Sort: Newest
Subscribe
Login
1 Comment
Newest
Oldest Most Voted
Inline Feedbacks
View all comments
J
Judy Meagher

Congratulations William! Keep up the good work! We’re proud of you! I wish we had started this great game in college ( or earlier)!!
Bob and Judy Meagher
(Your Aunt Robin’s in laws)