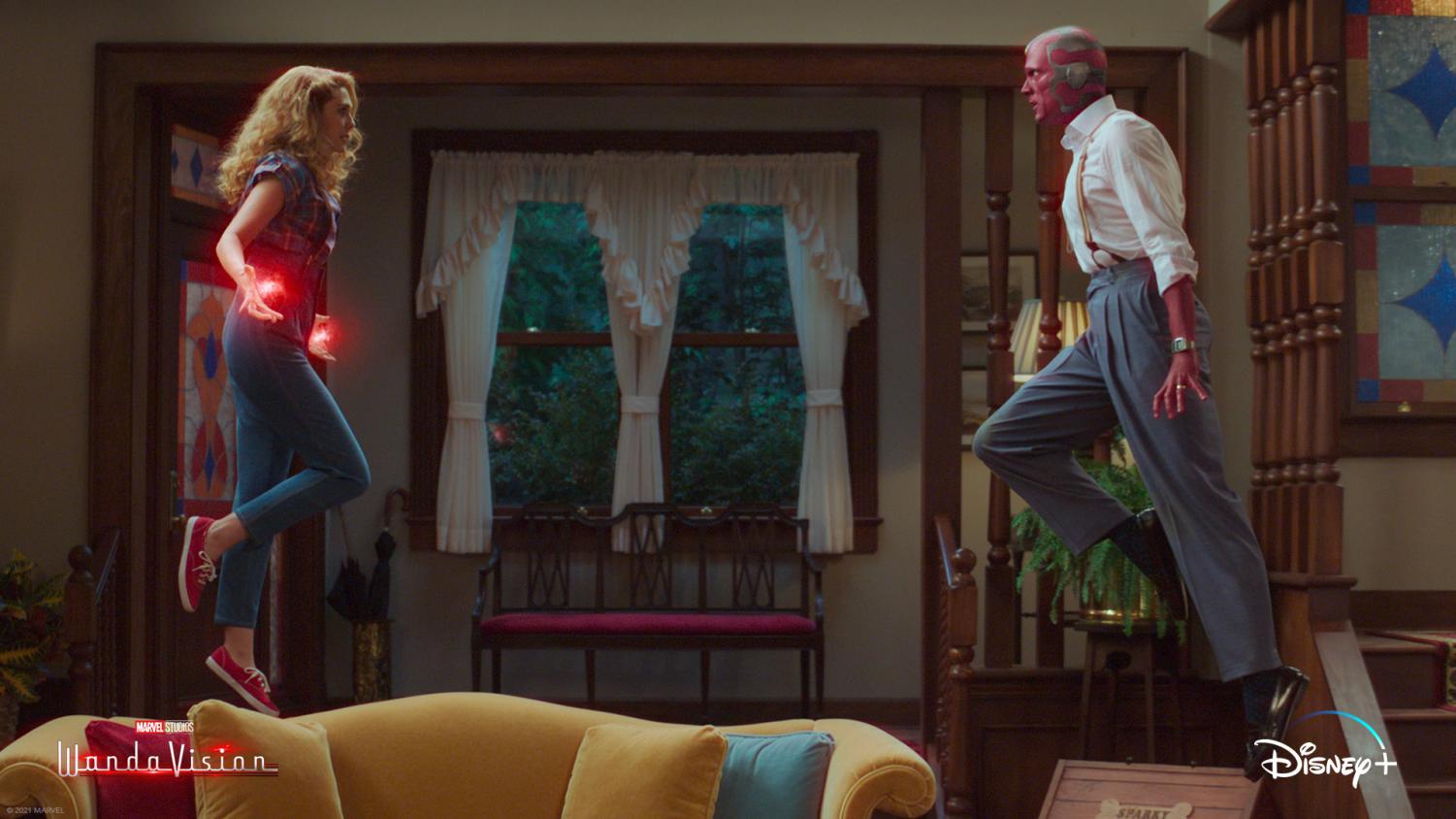 Welcome to Westview: Episode 5 of ‘WandaVision’

Emotions run high in episode five of “WandaVision,” with revelation after revelation raising more questions than they answer. Westview is falling apart.

And as the Westview illusion begins to crumble, the anxiety of episode five of “WandaVision” is palpable—in everything.

We feel it in the awkward tension that seeps into almost every scene as Vision begins to push back against Wanda’s constructed reality. We feel it in the confusing overlap between the 80s laugh tracks and canned applause that play alongside the dramatic and brooding modern background themes. But most of all, we feel it in the way that two realities must now coexist in the world of “WandaVision”—two realities that cannot safely coexist for long.

After the bold recontextualization of episode four that put everything into a new perspective, episode five had big shoes to fill. Would we travel back inside the Westview bubble and flash forward another decade? Or would we continue to follow the (somewhat-futile) research efforts of Monica, Darcy and the SWORD crew? In typical Marvel fashion, episode five chose to do both.

As we’ve come to expect, we open in Wanda’s living room, but two new important characters enter the mainstage: the twins. The opening scene overflows with 80s nostalgia, from Agnes’s flashy jazzercise outfit and tongue-in-cheek babysitter humor to the gushy cheesiness of the new intro theme à la “Family Ties” or “Full House.” But after episode four’s climactic ending, Wanda must now take a more active role in hiding the truth from Vision—and we can immediately sense the strain that this puts on not only their relationship, but the Westview fantasy as a whole.

In this opening scene, Vision unintentionally contradicts one of Wanda’s planned “plot points,” and his unconscious act of rebellion against her control dislodges Agnes from the sitcom, making her almost aware she’s on a TV set. She and Wanda awkwardly laugh it off and the illusion continues, but Vision is tuned in to the predictability of the sitcom now. Wanda must distract him before he realizes he’s just another unwilling participant.

Back outside Westview, the agents of SWORD divide into two factions. One, led by the stone-cold SWORD director Tyler Hayward, and fueled by first-hand reports from Monica, views Wanda as a terrorist and seeks to neutralize her. The other, led by Monica herself, knows that there’s more to her story and wants to get her the help she needs.

With this new dichotomy adding stress to the already-dire situation, Monica and Darcy continue to research the anomaly, and the dynamic between Parris and Dennings develops into a classic sisterly camaraderie. We honestly can’t get enough of them together. However, Agent Woo is unfortunately still annoying, but he does give us one relatable scene in which he and Monica debate whether Wanda or Carol is the more powerful Avenger.

Their research continues, and again the science and history make a surprising amount of sense, even in how they incorporate numerous references to the events of “Captain America: Civil War” and the Sokovia Accords. With their new knowledge of how Westview works, Darcy manages to somehow send an email through to Vision. In the truly terrifying sequence that follows, the entire office reads the email aloud and perceives it as a lighthearted joke. This scares Vision (and us) out of his wits, so he impulsively frees Norm from (presumably) Wanda’s control for just a few seconds and discovers the horrible truth.

With all this tension heaving beneath the surface, episode five quickly reaches an emotional climax—and a second, and a third, and practically the entire episode is one explosive moment after another.

Climax one: SWORD sends a drone into the anomaly, and unbeknownst to Monica, the outdated 80s contraption is armed with intent to destroy. Wanda is understandably infuriated, and she steps outside the bubble to challenge Hayward, giving us the clearest picture of her intentions with Westview thus far. In the dark field surrounding the suburb, the confrontation is a cinematically gorgeous shot, with the deep crimson of Wanda’s hex spheres starkly contrasting the green laser sights of the SWORD agents’ futuristic rifles. Her Sokovian accent also makes a return for this scene—what’s that about?

Climax two: The boys, aged up to ten years old, adopt a dog that dies not fifteen minutes later, and Wanda must explain to them that they can’t run from death. Here she gives the kids the therapeutic healing moment that she herself needs, but we can’t blame her for her hypocrisy; we know how deep her pain runs. And in this traumatic display of desperation, Olsen outdoes herself yet again. The classic Scarlet Witch head tilt, tears in her eyes, a crazed, hopeless, anguished look behind those tears—Wanda wants to say more, she wants to say so much—but she simply can’t. This is the life she’s made for herself, and she has to stick to it.

Climax three, the one to end them all: Vision yells at Wanda for the first time. He comes home from work and confronts her about the mind control, but Wanda doesn’t even want to deal with it and attempts to run the credits on him in the middle of the conversation to preserve the sitcom framework. But Vision resists. The two duke it out in the living room in a fight that looks and sounds like a sitcom narrative device, but the content of their argument is so beyond anything a sitcom would ever approach that we feel Wanda’s and Vision’s pain secondhand.

As Wanda continues to rewrite the reality around her, new layers force their way into her traumatic history with Vision—applying multiple coats of agon-icing to the same tragic cake. Her real, powerful trauma and guilt filtered through the 80s lens is simply uncanny, driving the show into almost horror-thriller territory. We can only wonder when the two realities at odds with each other will once again converge, but one thing’s for sure: the singularity approacheth.