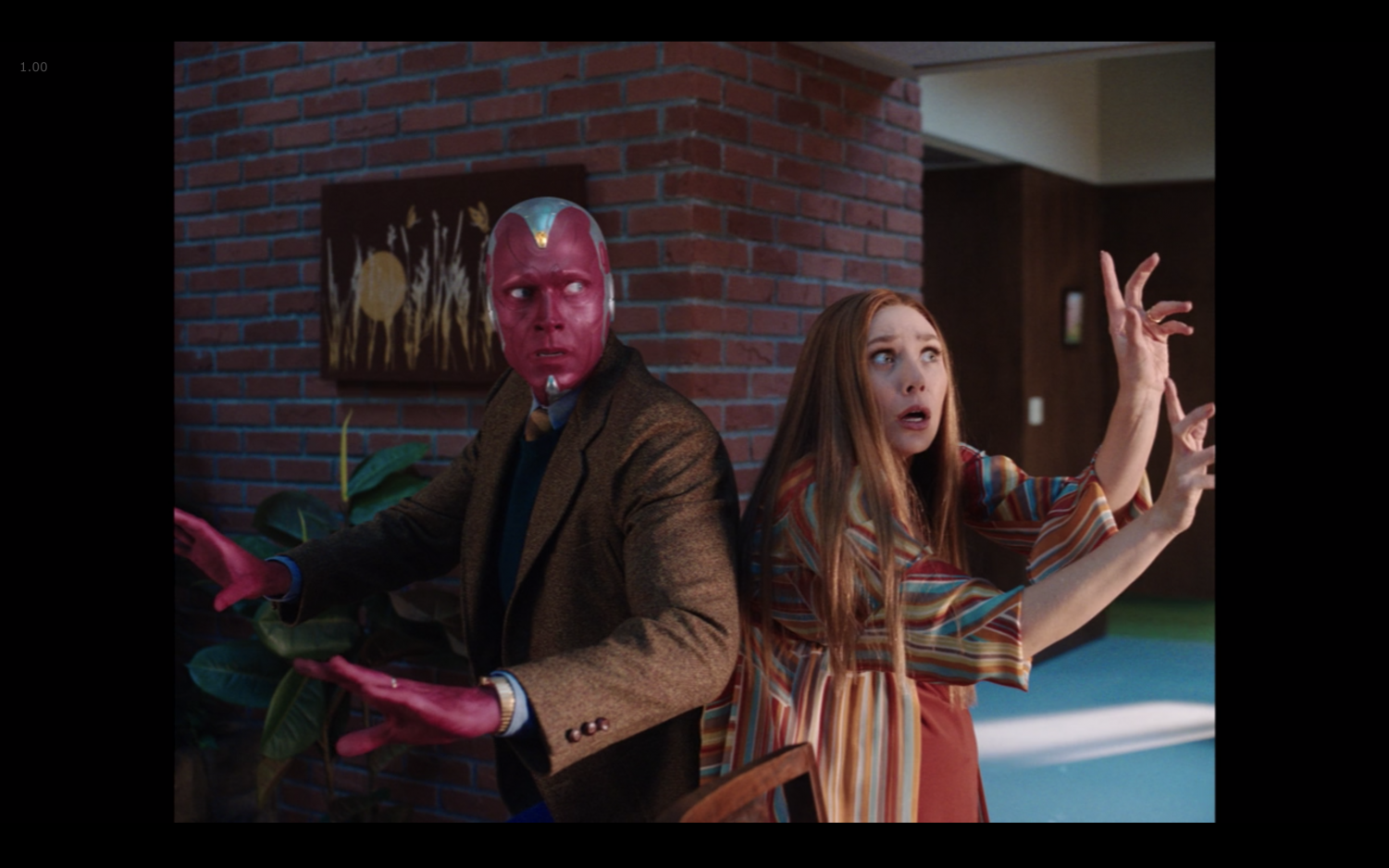 Welcome to Westview: Episode 3 of ‘WandaVision’

Tune into episode three of “WandaVision” for a hearty dose of 70s whimsy—and the same uncomfortable, uncanny strangeness that made the first two episodes so captivating.

It’s the kind of discomfort you feel when someone catches you in a room you know you shouldn’t be in, doing something you know you shouldn’t be doing. They might glare at you with an obviously fake smile, you’ll lie and say you “thought this was the bathroom” and then it’ll eat away at you for the rest of the day. Apologizing would only implicate you further. So when you’re confronted about it later, you dig yourself deeper into the hole.

This is exactly the energy conveyed in the latest episode of “WandaVision,” where we see Wanda and Vision (Elizabeth Olsen and Paul Bettany) living out their storybook lives once again, this time in the 70s. Following a happy-go-lucky intro montage à la “The Brady Bunch,” the couple (still technically newlyweds, even though it seems decades have passed) struggles to contain Wanda’s powers, which have become erratic in the wake of her sudden pregnancy.

On a surface level, the episode capitalizes on that unique brand of 70s whimsy to create hilarious and crazy scenes that feel very “Wizards of Waverly Place” meets Disney’s “Haunted Mansion” ride. Paintings spin on the walls and chandeliers fall unprompted. Wanda accidentally brings to life both a butterfly mobile and a stork painting as she decorates a room for the new baby, and when her water breaks, it starts raining in the living room.

This wacky backdrop only makes the more chilling scenes stand out, and episode three is chock-full of them. Vision first has a bizarre encounter with next-door neighbor Herb and questions Wanda about recent strange happenings, including from episodes one and two. But Wanda won’t tolerate his suspicions. After a brief moment in which she appears nervous, scared, confused, lost—all of the above conveyed through one masterful facial expression from Olsen—we inexplicably “glitch” back to the same scene, just a few shots before Vision verbalized his concerns, as if the VHS player encountered a snag and skipped backwards a few seconds on the tape.

Later, Wanda’s doctor makes an odd comment to Vision about small towns being “inescapable,” and Herb and Agnes struggle to reveal something similarly odd, finding themselves ultimately unable to break the news, whatever it is, to Vision.

But episode three’s crown jewel is a scene that follows the birth of Wanda’s twins Billy and Tommy. Lost in postpartum bliss, she seems dazed and overwhelmed by her own wonderful fantasy. In this relaxed, almost ethereal state, Wanda finally acknowledges the death of her twin brother Pietro (aka Quicksilver) at the hands of Ultron all those years ago.

It’s a delicate moment that’s both written and paced spectacularly, full of heartbreak, resentment, wistfulness, longing, desperation: all the repressed pieces of Wanda’s personal trauma that she didn’t have time to process when confronted with the bigger, badder villains of “Infinity War” and “Endgame.” In this therapeutic moment, she sings a Sokovian lullaby to her twin baby boys, and it seems maybe she can finally begin to heal psychologically and move past her denial.

Then Geraldine, who not-so-accidentally “stumbled” into the mainstage to witness Wanda at her most sensitive, makes a fatal mistake: she asks about Ultron. Her presumably innocent question ever-so-temporarily reminds Wanda of her real life, her life outside the fabricated reality of Westview, and then the gloves come off. With a frighteningly subdued anger, Wanda simply ejects Geraldine from the Westview illusion completely, giving us our second brief glimpse outside the as-yet-unexplained dimensional bubble within which Wanda has cocooned not only herself, but an entire town. Agnes and Herb’s whispered rumors about Geraldine, and her ejection, make us wonder: could Geraldine be an outsider? Can she get back into Westview now?

Episode three is a terrifyingly beautiful chapter in Wanda’s story, where we see her doing anything she can to maintain her ignorance-is-bliss life with Vision in the picture-perfect reality of her own creation. There’s so much pain smothered beneath the pleasing 70s color palettes and laugh track. It’s only a matter of time before everything comes crashing down.

Tune in next week for episode four.