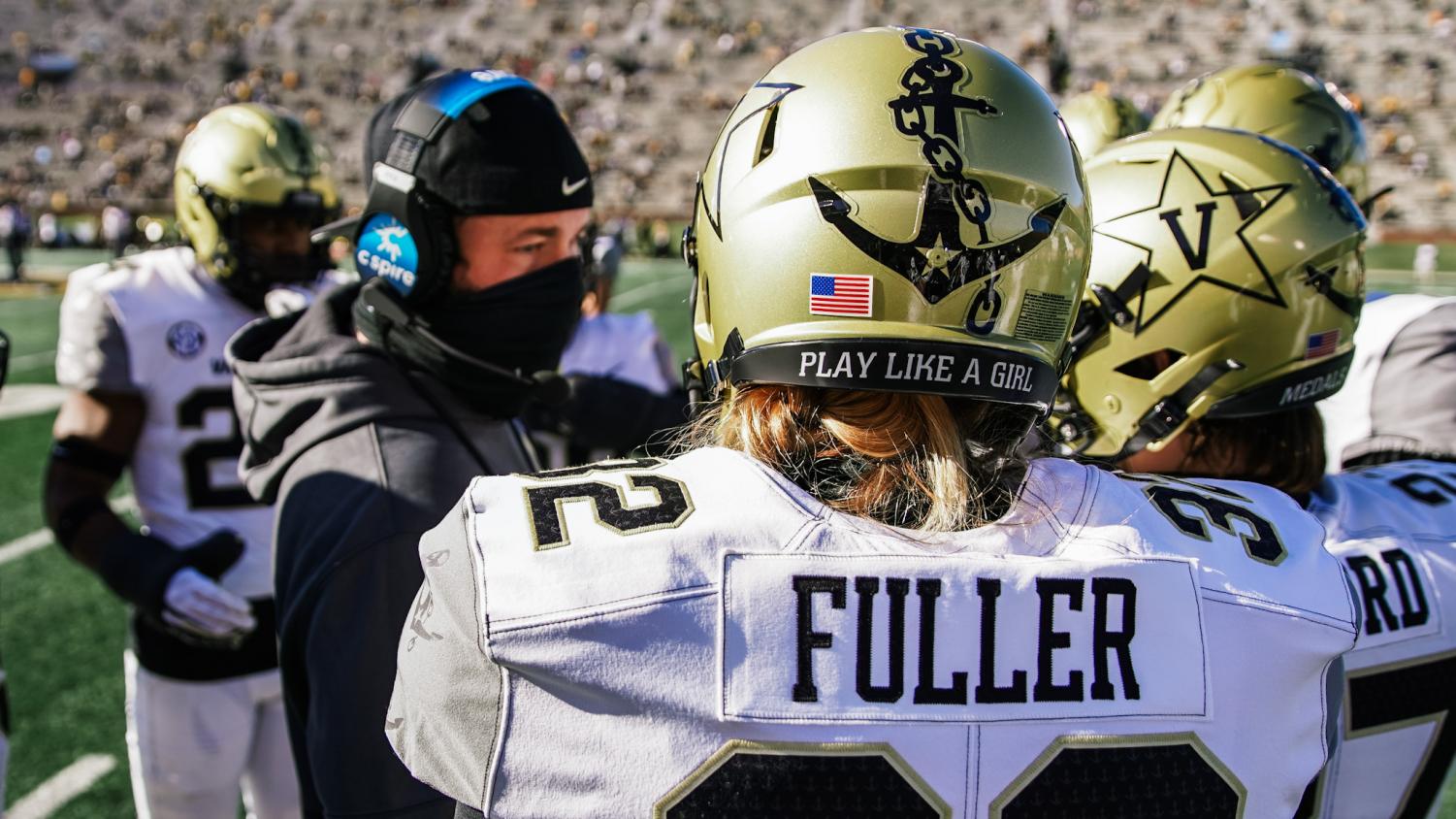 A week removed from an SEC Tournament championship, Sarah Fuller made her debut with the football team on Saturday. In the process, she made history.

On Nov. 24, The Hustler received a tip—several tips—that Sarah Fuller, Vanderbilt soccer’s starting goalkeeper, was practicing. Not with the women’s soccer team, though. With the football team. With the men. The ones in pads, the ones in helmets, the ones who routinely deliver—and receive—back-breaking blows because, well, it’s a part of their sport. It’s violent. It’s dangerous. And, of course, it’s exceedingly difficult, even for the most gifted athletes.

The gridiron is not for everyone. We’re taught that it’s not for the faint of heart; it’s for the toughest, meanest, fiercest, manly men. Heck, walking onto that field, that gridiron, requires protection, and lots of it. The helmet, a heavy hunk of plastic, weighs enough to give the average joe neck pains. It has metal bars wrapped around it, bearing semblance to a cage or prison cell. The shoulder pads, which might look like a Star Wars stormtrooper if not for the jersey draping over its shell, increase your diameter significantly. The girdles, or leg pads, and the cleats are merely pieces of the intricate, battle-ready outfit. It’s a lot.

Football is a man’s sport, or so we’re taught. Rarely do we stop to ask why. Rarely are these boundaries overstepped. When they are, it’s at the elementary school level. Sometimes middle school. Or even high school, when we’re talking about top-tier female athletes. And we’d be remiss to not talk about college. It’s happened once or twice or thrice, but it’s happened for Willamette in the NAIA,Jacksonville State in the Ohio Valley Conference and New Mexico in the Mountain West Conference. Fantastic achievements by all means, but it’s not the Power Five.

The glass ceiling just hadn’t been broken in the Southeastern Conference (SEC) or at all in the Power Five conferences.

When the Commodores took the field, they brought with them a Trojan Horse. A Trojan Horse of hope. With the helmets and the pads and the gridiron attire, one could hardly recognize it. Nestled under a disguise of equipment, beneath one of those uniforms, No. 32 to be exact, was Sarah Fuller. On Saturday, she was just one of them.

Was one of them.

If you looked a little closer, if the strange selection of camera angles courtesy of SEC Network actually scoped in on the Trojan Horse rather than the vast sea of helmets on the sideline, you could see it quite easily. With her braided ponytail extending out the back of her helmet, a helmet that proudly stated “PLAY LIKE A GIRL,” Fuller courageously went where no one ever had.

They said some pretty nasty things.

While Fuller didn’t need to do anything to prove herself to her supporters, she could have crumbled under pressure. The pressure from those other people, or the pressure of kicking a football for the first time just four days before appearing in a game (at the highest level of college football), the pressure of taking that first practice kick a mere two days after her soccer season ended, the pressure of breaking the glass ceiling—it could’ve been burdening.

“Honestly, I was just really calm,” she said on SEC Network.

Her eyes squinted. She was smiling below her face covering, it seemed.

“The SEC [soccer] Championship—” now her neck gaiter slipped off her face, revealing an ear-to-ear smile, and she adjusted the mask to cover her face as she continued, “was more stressful, if I’m going to be honest.”

That is, she kicked the ball down the field.

And she kicked down a door, inspiring millions of young athletes, showing them that they, too can achieve their dreams, even if it never before seemed possible.

Vanderbilt football drew possibly its largest audience in recent memory as it faced the Missouri Tigers on Saturday. But it wasn’t a rivalry game, nor was it on a marquee network. It was Vanderbilt facing Missouri, a team that literally joined the conference eight years ago, and it was on SEC Network, which must be channel 600-something in some regions.

One team entered the contest with a .500 record; the other had not won in its first seven games of the season.

And yet, millions were talking about it. Millions were watching. Millions were left waiting, due to Vanderbilt’s inability to get anywhere close to field goal range, for Fuller to make her long-awaited debut.

The Commodores gained 83 yards of total offense in the first half, while the Tigers gained 315.

The whole country was hoping to see an historic moment. The anticipation was immense. Every time Vanderbilt crossed midfield, every time it seemed like the Commodores might get into field goal range, like when Ken Seals found Cam Johnson for a nine-yard pass to get to the Missouri 47-yard-line, the audience would take one step closer to their televisions.

Then, the Commodores would take two behemoth steps back, like when they proceeded to pick up a false start, followed by a delay of game. Then a strip-sack, which they were lucky to recover, then another sack to bring up fourth-and-28 on their own 35.

Hoping to see the first woman to log a snap in a Power Five football game, Fuller fans were instead forced to watch Vanderbilt football.

Coming out of the locker room in the second half, though, Coach Mason saw an opportunity by way of kickoff. At long last, he called her number.

She trotted onto the field, where she was joined by 21 men.

“I just had to go out there and do my thing,” Fuller said, when asked whether she felt nervous before the kick. “I’ve worked on it—and I know it’s crazy—all week, and I knew exactly what we needed to do, and I had the team behind me.”

She lined up with freshman cornerback Ryan McCord holding the ball down. An unconventional formation for a kickoff, but she lined up nonetheless.

“Again, the nerves were more there for the SEC Championship,” she reiterated in the postgame press conference. “Going out there and kicking a football wasn’t too bad.”

She raised her arm—a gesture to the 10 other men on her team that she would decide when the play began.

Then, on what Coach Mason said was a designed squib kick, she kicked the ball to the opposing 35-yard-line. She executed the kick perfectly.

In a calendar year that’s been plagued both literally, by a virus, and figuratively, by immense division in social, political and economic topics, moments of unison, moments of hope and moments of happiness are far and few between.

Yet on Saturday, in the Vanderbilt-Missouri game, perhaps the most mediocre SEC matchup on paper, everyone all cheered together. At Faurot Field, where mostly Missouri fans filled the stadium, everyone applauded. Everyone was on the same team.

Everyone was on Fuller’s team. 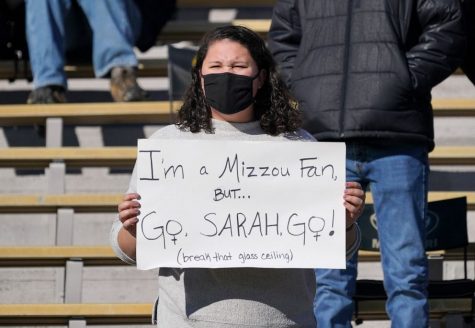 She wouldn’t allow this to be her moment, though. She handled it like only a trailblazer would.

“All I want to do is be a good influence to the young girls out there because there were times I struggled in sports,” Fuller said. “But I am so thankful I stuck with it, and it’s given me so many opportunities.”

She used the moment to help the team win—to no avail, but she tried. That’s why she even gave a halftime speech, a pep talk of sorts, as Vanderbilt trailed 21-0 before taking the field.

“You can take a leader out of their sport, but at the end of the day, she’s still a leader,” quarterback Mike Wright said, when asked of Fuller’s halftime speech. “There was a moment where we exploded for a first down, and Sarah was literally the only one yelling on the sidelines… She mentioned that [in the speech]. When they won the SEC Championship, it wasn’t because of the girls on the field. It was everybody. Everybody had the same mindset. Everybody was screaming, everybody was cheering for each other… Anybody can go back and look. [After her speech,] the sidelines were electric the whole game.”

Fuller has moved on. Not like she’ll ever forget what she did, and neither will college football. But she’s moved on.

She’s got Georgia on her mind.

Last Monday, Fuller had just returned from her SEC Championship. She was packing her bags to go home for break when Ken Masuhr, Vanderbilt soccer’s associate head coach, gave her a call.

“Hey, you got a minute?” Fuller recalled him saying. “They need a kicker.”

“I’ll be there in an hour,” Fuller said.

Now, she packs her bags. Not to head home, but to head back to campus.

With two games left in the season, she has no intentions of going home any time soon.

The Vanderbilt Hustler welcomes and encourages readers to engage with content and express opinions through the comment sections on our website and social media platforms. The Hustler reserves the right to remove comments that contain vulgarity, hate speech, personal attacks or that appear to be spam, commercial promotion or impersonation. The comment sections are moderated by our Editor-in-Chief, Rachael Perrotta, and our Social Media Director, Chloe Postlewaite. You can reach them at [email protected] and [email protected]
All The Vanderbilt Hustler picks Reader picks Sort: Newest
Subscribe
Login
4 Comments
Newest
Oldest Most Voted
Inline Feedbacks
View all comments
A
Alumnus

Watching the football this past weekend reminded me of The Emperor’s New Clothes. Commentators (afraid of being fired for telling the truth) and the SEC were afraid to point out what was really going on but instead talked about how great a line drive kick that went 30 yards looked. The truth is Vanderbilt football looks like a complete joke.

I feel bad for the young lady, as she was used by the woke cabal (and an incompetent coach). But mostly I feel bad for the football team and the humiliation this stunt conveyed. Heads up guys; be warriors and finish the season strong.

This is nothing but a big, giant woke farce.