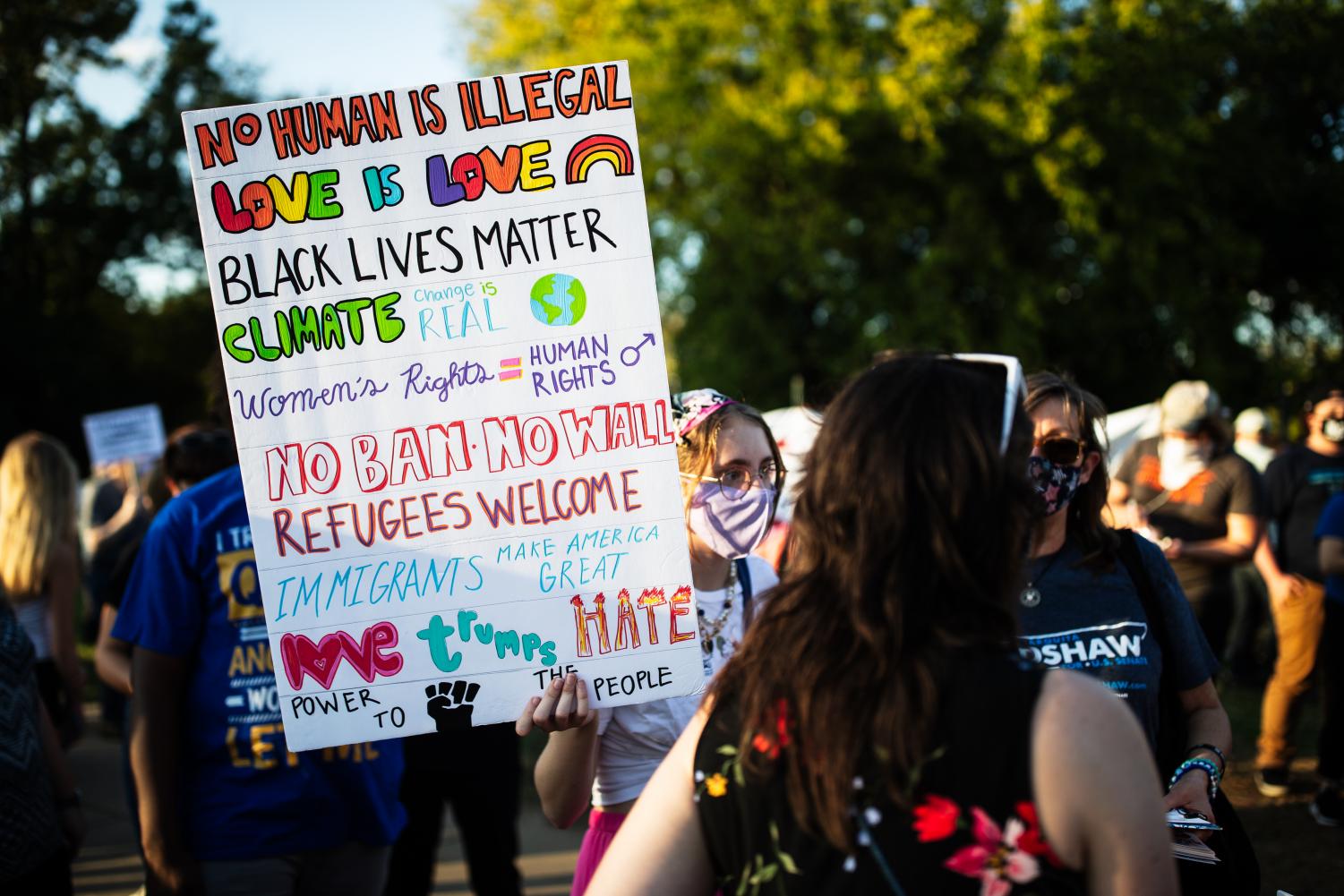 Protesters are outside of Belmont University prior to the last Presidential Debate. (Hustler Multimedia/Hunter Long) (Hunter Long)

Protesters are outside of Belmont University prior to the last Presidential Debate. (Hustler Multimedia/Hunter Long)

Consider your allyship: does it come from a fear of judgment or a place of compassion?

I have been exhausted by the white liberal. Many of them engage with social justice at their convenience, slipping in and out of their communal responsibilities like sheep’s clothing. At first, I was compelled to write this piece in response to my white professor reading a slur in class, then going further to claim they had just mispronounced another word. Immediately I was shocked and angry, both because of the word’s history and the feeling of being let down by a well-accredited academic.

But as the adrenaline drained from my body, it became startlingly clear that what they had just done was largely insignificant. Valid or not, as a Black woman, I have expectations for how white people will comport themselves, even (especially) adults in positions of power and even (especially) those who laud themselves as allies. I am used to the subtle microaggressions that pervade everyday interactions, whether it’s mixing up the names of Black students or stereotyping an individual’s interests. This professor met many of these expectations and even surpassed them, in spite of their efforts to position themselves as an ally.

When I think about this incident and all others of a similar nature, I am reminded of these words from Martin Luther King Jr.: “Shallow understanding from people of goodwill is more frustrating than absolute misunderstanding from people of ill will.” As scary as blatant bigotry can be, there is something truly haunting about the masked indifference from the people who claim to be your allies. There is a tendency in white allies to participate in social justice only when it is popular, and with an unflinching mindset not open to instruction.

In order to truly create change, white allies must deepen their commitment to all aspects of social justice as well as to their own critical introspection.

There is an incessant and harmful co-optation of the Black liberation movement by white liberals who feel they have authority to shape narratives and educate others on issues that are not their own. The white liberal has claimed this past summer’s racial justice movement as their own and framed it as a civil rights renaissance. I butt up against the term “renaissance” because there is nothing new about last summer to me.

I am familiar with the nature of Breonna Taylor’s case and the inaction in charging Officer Hankison because a total of 48 Black women have been killed by officers since 2015 with only two convictions. I am familiar with the numerous Black trans deaths driven by transphobic and racist ideology, though today’s figure has grown from the 27 deaths reported in 2016. I am familiar with the near persecution of Black men because of the fear I have for my father and brother since Trayvon Martin’s death in 2012. People who repeatedly categorize the events of this summer as “crazy” or “surprising” have an immense luxury in discovering racial violence for the first time.

The white co-optation of Black liberation exists in many other forms. There is a belief that if you fulfill certain benchmarks for good behavior, like voting for the “right” political party or donating to Black organizations, you are in the clear and become infallible. Naturally, this is dangerous because, as white people identify more and more with their role in allyship, they place themselves on higher and higher pedestals. No person is immune to mistakes or missteps, which is why I invite you to consider your allyship: does it come from a fear of judgment or a place of compassion?

Worse than that, as the white liberal builds their niche as “ally,” they pull away from their inherent role in systemic oppression propagated by white people. They begin to “other” themselves from their racist and bigoted counterparts so much so that they no longer identify with the system they inherently benefit from, and cannot envision themselves displaying microaggressions. Examine your allyship for intention and know that, if you truly wish to contribute to a movement, you must accept your own mistakes.

I do feel it important to address that white liberals are not the only social advocates that fall victim to blind activism. This summer brought “fads” such as posting a black square on Instagram in June and running a 5k for Arbery in May, both of which made very little actual change. I understand the draw to be involved in a big movement, to make change in the ways you know you can, but you cannot stop your involvement there. Uplift the voices of Black academics like Patrisee Cullors and Frank B. Wilderson, and learn to listen to what they say. Cullors is an activist and one of three founders of the Black Lives Matter organization, and Wilderson is one of the first writers to foray into the field of Afro-pessimism. Both individuals directly address the consequences of being Black in this country as well as the nuances behind why those consequences exist.

This education is crucial to understanding the history of a marginalized group and addressing the systemic issues that affect factors of living such as wages or access to healthcare. The unfortunate thing is, no amount of reading or conversation will truly bring you into the Black experience; this is why, in spite of my professor’s political leanings, their actions did not surprise me. My professor and many other white liberals approach activism with confident conjecture rather than adequately acknowledging their deficits in comprehension.

Allyship and support, by definition, will never come from complete understanding. Do good not because you are being watched or because you feel some need to repent but rather because it is right. Be receptive to feedback from those you partner with and accept that inequity and atrocity exist even though you will never have a firsthand experience. Extend your activism beyond watershed moments like this summer and address the microaggressions you are able to easily overlook.

My professor and people like them are not doomed or irredeemable, but the intersection of white allyship and problematic behavior must seriously be considered. The two often appear together, and I empower white liberals to evaluate how they can learn to accept and change their behavior. I truly value your dedication to marginalized communities, both from home and out protesting on the streets, but you still must address where microaggressions and co-optation come from.

The Vanderbilt Hustler welcomes and encourages readers to engage with content and express opinions through the comment sections on our website and social media platforms. The Hustler reserves the right to remove comments that contain vulgarity, hate speech, personal attacks or that appear to be spam, commercial promotion or impersonation. The comment sections are moderated by our Editor-in-Chief, Rachael Perrotta, and our Social Media Director, Chloe Postlewaite. You can reach them at [email protected] and [email protected]
All The Vanderbilt Hustler picks Reader picks Sort: Newest
Subscribe
Login
2 Comments
Newest
Oldest Most Voted
Inline Feedbacks
View all comments
M
Melissa Robinson

Absolutely amazing! Well-written. Something a lot of people need to read.