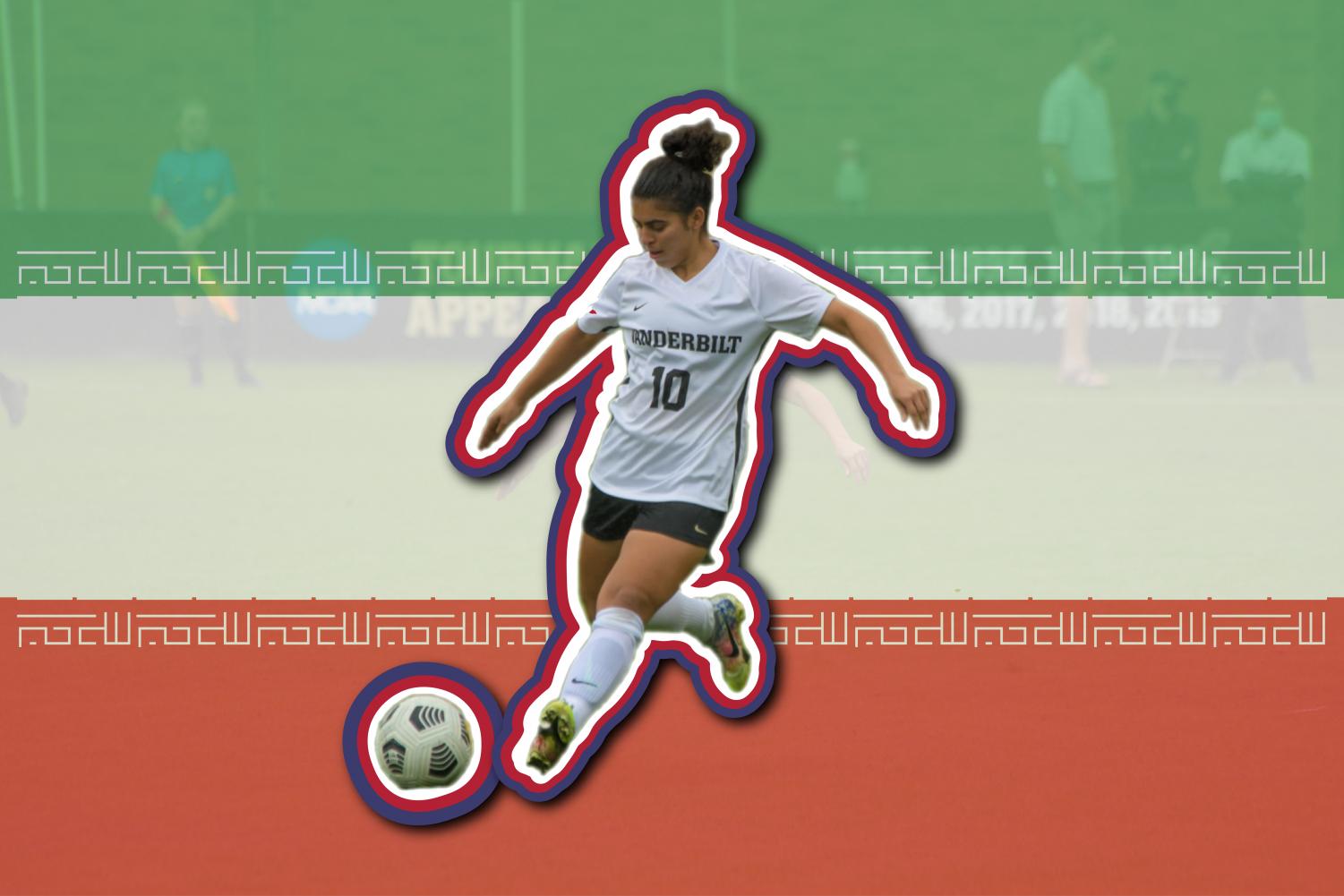 Kimya Raietparvar, a sophomore midfielder, represents both her school and her country. (Hustler Communications/Emery Little)

From Texas to Iran to Nashville: Kimya Raietparvar’s journey to Vanderbilt

Kimya Raietparvar has played on both United States and Iranian international teams, which eventually led her to Vanderbilt—where the sophomore is already making an impact.

Sophomore midfielder Kimya Raietparvar’s first soccer-related memories have little to do with playing the sport, but rather watching it. Born in Denton, Texas to Iranian immigrants Turaj and Shalarzad Raietparvar, Kimya was exposed to the sport at a young age and spent weekends alternating between watching her father participate in neighborhood pickup games and watching Premier League matches with her father, a long-time Liverpool fan.

By age 10, Raietparvar was formally training and competing with a club team, which she continued to stay involved with until her transition to college soccer.

Alongside traditional soccer, Raietparvar began dabbling in futsal, soccer’s indoor equivalent, at age 13. Her goal was simply to improve her technical skills, but Raietparvar did that and more. Thanks to her rapid improvement, she received invitation to the United States national futsal team camps, during which she was offered a spot on the U-14 national team and later the U-16 team.

As high school graduation grew near, Raietparvar noticed all of her peers getting recruited for college and decided to do the same.

“All the club teams I was around, everyone was committing to colleges,” Raietparvar said. “I started going to camps and getting noticed by colleges, and everyone was doing it, so why not do it as well?”

Raietparvar initially committed to play for Brown University, but after a last-minute change of plans, she decided to reopen her recruitment and attend a Vanderbilt camp.

“I’ll never forget,” Ambrose said. “[Kimya and Vida] were playing against each other, and they almost tore each other’s shirts off their backs because they were so competitive. But Kimya’s unflappable in so many ways; her technical skill is far beyond a lot of players on our team—it is really exceptional. Her composure and technique really stood out.”

Since joining the Vanderbilt Commodores, Raietparvar took the transition from high school soccer to Division-I soccer in stride, playing in 20 games during her freshman and starting in six this fall season.

“My club’s soccer was fast paced, and I think it really prepared me for college soccer,” Raietparvar said. “It’s definitely more physical here; you need to be strong. You need to be fast. So I have been working on that more than when I was in club soccer. There’s some similarities, but obviously it’s more fast-paced.”

Though this is only Raietparvar’s second year at Vanderbilt, Coach Ambrose has already seen Raietparvar’s understanding of the game reach new heights.

“She’s always been technical. She’s always been creative. She’s very clever. The passes she makes—really sublime technique. It allows her to be successful in spaces that most people can’t be successful in,” Ambrose said. “I think what she’s learned though, is that the understanding of the game and technique are only two parts of this. The other part is the physical nature and the psychological aspect. And the mental part of it for Kimya is consistency of performance, and also forgiving herself for mistakes.”

Grit and resilience are traits that Ambrose has started seeing from Raietparvar this fall, who has committed to putting her best foot forward every moment she spends on the field.

In addition to her college soccer career, Raietparvar was recently called up to play for the U-19 Iranian national team. As an Iranian-American, she’s been fortunate to represent both countries through her sport.

“It’s definitely one of the peaks of my life. My parents are from Iran, and over there, there’s a lot of pride in your country. So, representing Iran, nationally, is something that was really touching to my whole family,” Raietparvar said. “Being able to represent them, and at the same time, knowing that I’m American—it’s just a really big moment for me and my sister [who joined her on the team].”

Connecting culturally through soccer has been extremely meaningful to her, but it’s also been special for her grandmother to see.

“My grandma, in Iran, saw me on TV, and she was crying and all that stuff,” said Raietparvar. “She’s just really proud of us.”

Raietparvar’s work has also gone beyond sports, using her platform to be socially active and engaged. This fall, she worked with teammate Blue Ellis to help get people registered to vote. She started by helping her teammates register, then continued to assist a broader spectrum of people as a member of Vandy Votes. Their registration event at the football stadium helped get hundreds of citizens ready to vote in this past election.

“If I can use my platform as a student athlete to get more people registered to vote, I make a difference, politically, for others. And for underrepresented people, that’s something I can hopefully continue,” Raietparvar said.

On the field, Raietparvar has high hopes. She wants to continue playing internationally and eventually professionally as well, all while staying active in social causes. Here at Vanderbilt, she looks to improve and adapt to fill whatever role the team needs her in for the next two years. And for these next few weeks, she’ll try to help Vanderbilt soccer claim an SEC tournament title after the strangest of seasons.

“COVID has impacted so much this year,” Raietparvar said. “I’m not gonna lie and say it hasn’t affected us. It has affected us, but I’m really proud of the way that the team has rallied together. We’ve come to consensus that we want to play, and we want to get something out of this year.”

The Vanderbilt Hustler welcomes and encourages readers to engage with content and express opinions through the comment sections on our website and social media platforms. The Hustler reserves the right to remove comments that contain vulgarity, hate speech, personal attacks or that appear to be spam, commercial promotion or impersonation. The comment sections are moderated by our Editor-in-Chief, Rachael Perrotta, and our Social Media Director, Chloe Postlewaite. You can reach them at [email protected] and [email protected]
All The Vanderbilt Hustler picks Reader picks Sort: Newest
Subscribe
Login
1 Comment
Newest
Oldest Most Voted
Inline Feedbacks
View all comments
B
Bo Carter

As a resident of South Denton County, Texas, and loyal Commodores (Hustler sports staffer from 1970-74), it has been great to see the Raietparver sisters represent Vandy and Denton so well – good luck this season – Bo Carter (A’74)