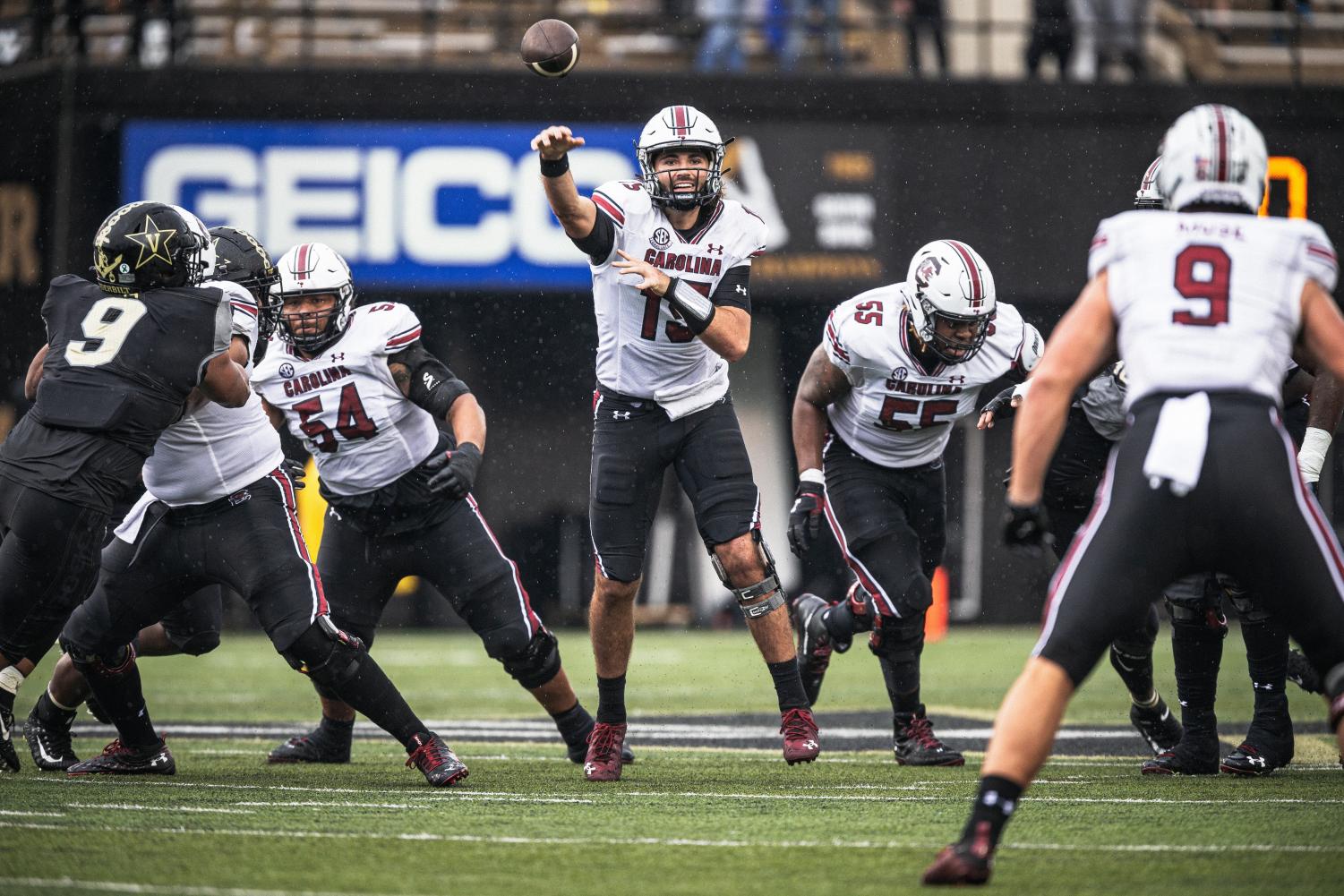 For the second week in a row, Vanderbilt lost at home 41-7. The shorthanded Commodores fell to 0-3, and things are not looking up.

Vanderbilt Stadium was a dizzying, nauseating sight on Saturday morning. A torrential downpour was brewing, just as the outpour of South Carolina points fermented. The sky, a dark, depressing shade of gray, reflected an even darker tincture of gloom on the thousands of empty bleachers, which of course, by nature, are a tone of gray themselves. I arrived at around 9:30 a.m. CDT. But as soon as I entered the stadium, the moment I walked through the entrance, had my temperature taken, picked up my credential and continued to the elevator, I had reached a new epoch of my morning.

The elevator, a slow-moving ironclad, took like an hour, maybe even a month, to transport me to the press box. By then, the melancholy aura had taken over my mind, leaving me utterly confused. I lacked a sense of time. I didn’t even have the bright, glistening sun to tell me what time of day it was.

Some context might be helpful. Better yet, some context might make you as puzzled as me. In Week Two, Mason kicked off the postgame press conference (yes, the other 41-7 loss) by saying “you know, I’ve got to give credit to LSU.” The week before that, Week One, it was “I want to give credit to Texas A&M.” And rest assured, rewind all the way to the final game of 2019, a 28-10 loss to Tennessee, and you’ll hear the same voice echo a similar phrase into an identical microphone: “first of all, congratulations to [Tennessee head coach] Jeremy Pruitt.”

I’ve taken some time to digest Vanderbilt’s third loss in as many games. I have a lot to say. But as my last season covering Vanderbilt football for The Hustler unravels, I’ve learned something. Watching the Commodores play football, watching Mason lead his army, watching the student-athletes donning the Star V invent ways to lose I never thought were possible—that’s what’s warping my sense of time, not the sad stadium. Time just seems like a flat circle, especially when one turnover turns to another, when one play call leaves you as dumbfounded as the next, when one loss blends into ten.

So, without further ado, I can just copy and paste the end of my introduction from last week.

“Vandy’s game was the same in Week Two. The same it’s been for the past two or three (or six) years. And with the same old loss, comes the same old apathetic Commodore Brunch menu.”

The only difference is that it’s Week Three.

Outlined against a dark-gray October sky, the Four Horsemen rode again. In dramatic lore, they are known as Famine, Pestilence, Destruction and Death. These are only aliases. Their real names, according to Coach Mason, are scoring, third-down defense, run defense and special teams.

This brutally metaphoric horseman intro, taken straight from a game recap written by Vanderbilt alumnus Grantland Rice (B.A. 1901), is rather fitting. I need not say any more about these four categories; you can tell, simply by the names “famine, pestilence, destruction and death” that Vanderbilt was lacking in all four of these areas.

The first horse, “famine,” as Rice wrote, is very much self-explanatory: scoring. Vanderbilt had seven points. Last week, Vanderbilt also had seven. The week before, Vanderbilt had 12, two of which were freebies from a Texas A&M mishap and subsequent safety call. The Commodores can’t score. In fact, they can hardly move the ball down the field. They converted on one of 11 third down attempts on Saturday. They had 173 passing yards, and they had just 76 rushing yards—on 33 attempts. That’s 2.3 yards per carry. If Vanderbilt’s halfbacks had simply dove headfirst, stretching out their entire body, the moment they came into contact with the ball every single time, I wonder if they would’ve averaged more than 2.3 yards.

Next, “pestilence,” the third down defense. It wasn’t horrendous. It wasn’t the type of performance that makes you look away, per se, as South Carolina converted on six of 14 third down attempts—that could be worse. But the disturbing part? The Gamecocks’ average third down distance to go was eight yards. Not great.

“Destruction,” the run defense, was no different. South Carolina just ran all over Vanderbilt’s defense, totaling 289 rushing yards with ease. They rushed for five touchdowns. South Carolina’s bellcow back, Kevin Harris, had 171 yards on 21 attempts, good for 8.1 yards per carry. His career night saw him find the endzone twice—one of them being an 88-yard house call on the first play of a possession.

And death, or special teams. Oh, death. Vanderbilt missed another routine field goal kick on Saturday. Again, for the second week in a row, it didn’t end up meaning much. They lost handedly anyways. But punter-turned-kicker Pierson Cooke missed a 29-yard field goal attempt, bringing his season tally to one make and three misses, including a miss from 29 and 22 yards out, respectively. I can’t even—I won’t. I’m done talking about the kicking.

Oh Oren Milstein, where art thou?

See, this brings me back to my concern from the beginning of the season. Don’t get me wrong: I’m thrilled to have college football return. I don’t care if it’s an abbreviated, conference-only schedule. I consider myself lucky to witness college sports in any form. And I especially love my college football.

But once again, on Saturday, I was doing mental gymnastics trying to justify playing this game. Last night, Vanderbilt safety Donovan Kaufman tweeted—and shortly thereafter, deleted—confirmation that he had tested positive for COVID-19. My first thought?

Kaufman is really good. That could hurt the Commodores.

OK, so how many people could he have possibly been in contact with? Who’s at risk? Are they going to be alright?

Minutes before kickoff, a spokesperson for Vanderbilt athletics informed members of the media that Vanderbilt would be playing with just 56 active scholarship players. And per a recent Southeastern Conference (SEC) ruling, each member institution needs a minimum of 53 active scholarship players to play—any less and the game can be rescheduled or declared a no-contest.

For reference, a college football team has 85 scholarships to divvy out among its student-athletes. Factoring in that a school may save some scholarships for recruits, and considering that Vanderbilt recently had a few players enter the transfer portal, I’m going to estimate that Vanderbilt has around 70 scholarship players on its roster.

They had only 56 available. Let that sink in. 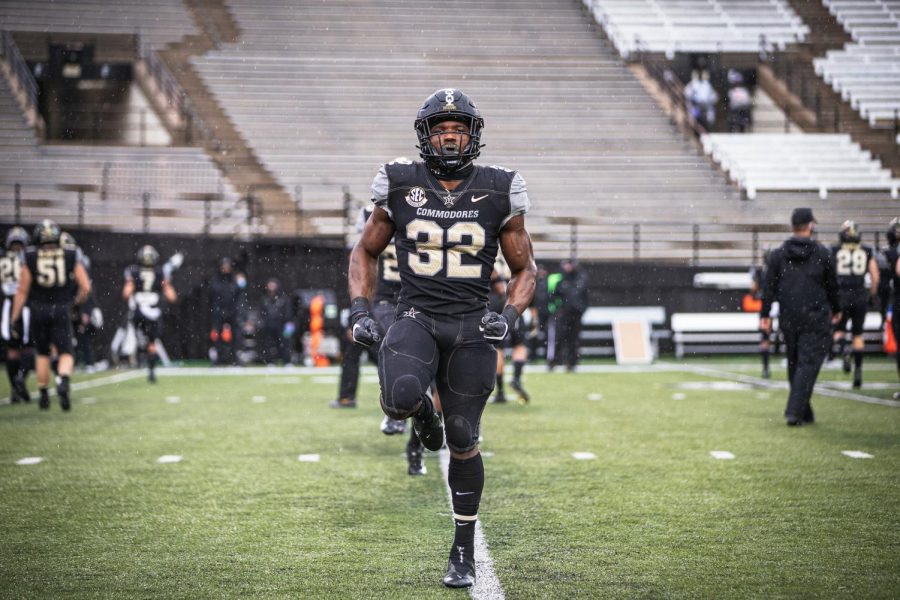 I dare you to try to tell me that this is safe. I dare you to tell me they’re doing this for any reason other than money. Try to explain to me, the non student-athlete, how these students are being done justice. Administrators are not putting on a season for the kids, and on Saturday, that was as clear as day. The reason why they’re having a season amid a global pandemic is because they want their money. They don’t care who gets infected with a potentially fatal virus in the process.

The strange part is that Vanderbilt again declined to give a number of how many students were in isolation. I know for a fact that Kaufman, Dashaun Jerkins, Randall Haynie, Ja’Veon Marlow and Devin Boddie Jr. were not on the field. I didn’t see them, at least. I just don’t understand why the numbers have to be a secret.

“We’ve never spoke to medical issues that way, in terms of our student-athletes. You know about the HIPAA laws just like I do,” Mason said.

But what I’ll say is this: Missouri played LSU on Saturday without seven players, including their three top wide receivers and three of their top four defensive linemen. They all sat out due to COVID-related isolations. They still beat the reigning national champion LSU Tigers, the same team to which Vanderbilt lost last week, despite being at nearly full strength.

The COVID brings up a bit of a moral dilemma, sure. But take a look around the conference. It shouldn’t excuse Vanderbilt’s poor performance—regardless of who sat out.

Vanderbilt is making it out to be way harder than it needs to be.

Offensively, the Commodores couldn’t get into any sort of groove in the first half. That’s quite alright, though. The defense was solid, and South Carolina’s offense was bad. So much so that it was only 10-0 at halftime.

But in the first half, Vanderbilt had a chance to chip away at the deficit. It was fourth-and-two on the South Carolina three-yard line. They needed a mere few feet to punch it in for six, and that was really the only option at the time (in case you forgot: Cooke missed a 29-yard field goal attempt just before this possession). The playcall?

Well, Seals rolled out to the right. And I don’t know if this was intentional, but he had one—yes, one—receiver even in his vicinity: Keyon Henry-Brooks on a crossing route. On a fourth down, goal line play, the decision is to the quarterback with one damn target?

4th and 2 from the 3-yard line and Vanderbilt opts to keep its offense on the field. They cannot convert.

Needless to say, Vanderbilt did not punch it in. They turned it over.

But this next one—this one is a special type of idiocy. It’s in a league of its own. Questionable play calling doesn’t do this play justice. This was a video game play; something you’d try, and subsequently fail, while playing Madden.

Vanderbilt still trailed by ten points. Almost two entire quarters left to play. This game was not lost—at least, not yet. Instead of merely punting the ball away, Vanderbilt tried to get cute with its playcalling. Instead, take a guess at what they tried.

If you guessed, “double-reverse, fake punt from your own 30-yard line in the pouring rain,” you must be psychic. Or you just remember seeing the same play. I couldn’t believe what I had seen.

A game changing play call. An avoidable mistake. Here we are, singing the same old song.

“A lot of the things we got hit with,” Mason said after the game, “were really self-inflicted wounds.”

Someone has to ask: how many more wounds can the coaching staff inflict before it becomes too many?

The Vanderbilt Hustler welcomes and encourages readers to engage with content and express opinions through the comment sections on our website and social media platforms. The Hustler reserves the right to remove comments that contain vulgarity, hate speech, personal attacks or that appear to be spam, commercial promotion or impersonation. The comment sections are moderated by our Editor-in-Chief, Rachael Perrotta, and our Social Media Director, Chloe Postlewaite. You can reach them at [email protected] and [email protected]
All The Vanderbilt Hustler picks Reader picks Sort: Newest
Subscribe
Login
2 Comments
Newest
Oldest Most Voted
Inline Feedbacks
View all comments
D
Doug Bates

I .have been a Vanderbilt fan for 65 years and this is the lowest the program has ever been, Coach Mason does not say this is unacceptable but rather that the situation is caused by remarkable excellence of the play of mediocre opponents. It is time to start negotiations with the SEC to allow us to drop football and protect our other sports.

I totally agree with you. I have been a fan for 60 years and the second half against South Carolina was the worst I have ever seen Vanderbilt play.