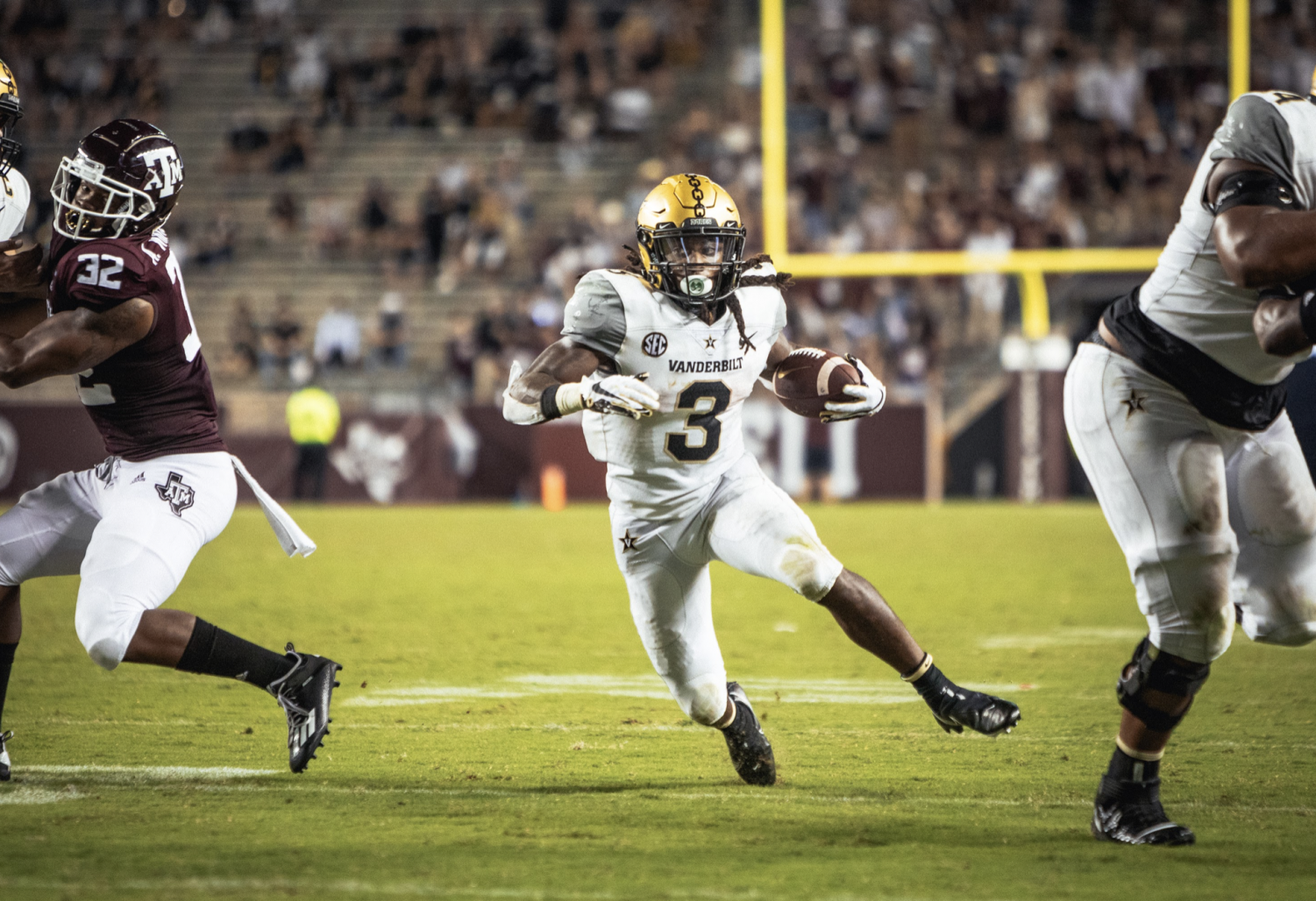 After only recording 88 rushing yards throughout his first two seasons with the Commodores, Ja’Veon Marlow has racked up 153 yards on the ground through two games this season, emerging as Vanderbilt’s top back.

“Make the most of your opportunities.”

It’s a phrase that’s become a cliche within sports. Something coaches and players often toss it around with little thought or meaning. But for Vanderbilt running back Ja’Veon Marlow, it’s something he lives by everyday.

Marlow, a Winter Haven High School product, came to Vanderbilt in 2018 as a three-star recruit with a reputation for running through tackles and making explosive plays. He hoped to make an immediate impact for the Commodores, but various injuries held him back during his first two seasons.

Throughout the past two years, Marlow has undergone surgeries to insert bone plugs, repairing cartilage damage, as well as to remove a torn meniscus.

“I’ve really never had injuries until my first two years of college, so it was just a big transition for me, trying to get back healthy,” Marlow says. “I had to really stay on top of things, make sure my body was right.”

That transition proved to be a difficult one on the field, too, as Marlow only carried the ball 15 times in 11 games played during the past two seasons.

This season, however, Marlow, is making his mark on the field and has emerged as the Commodores’ top back through two games, averaging 4.5 yards a carry.

Head coach Derek Mason attributes this production to a constructive offseason as well as a new sense of comfort on the field.

“Ja’Veon is finally healthy,” Mason says. “Coming off [the injuries] early a year ago, just still trying to get comfortable, he hadn’t quite gotten the strength back. [He] was unsure at times. During the offseason, he added seven pounds. He became much more of a worker.”

For Marlow, it all comes down to getting the most out of himself every second he’s on the field.

“[I am] really taking advantage of the opportunities I have now because the first two years I was really limited due to injuries,” Marlow says. “As I get on the field, it’s just like you don’t know how much reps you have, and you can’t take any of them for granted. I just make the most of my opportunities.”

Making the most of his opportunities is something Marlow has focused on through his injury and rehab process. That way of thinking, however, was instilled in him many, many years ago by his grandparents.

Marlow cites his grandparents and his mother as his main sources of motivation on the field. With his mother often having to work long hours, he spent a lot of his time growing up around his grandparents, who taught him several valuable life lessons—including the value of maximizing chances when they come.

“They would just keep me, take me around, and give me experiences,” Marlow says of his grandparents. “So that’s why I kinda grew up at a young age and knew a lot. I really don’t take anything for granted because that’s what my grandparents taught me a lot. It’s like you only have so much (sic) opportunities, so you’ve gotta make the most of them when you have them.”

When Marlow left Winter Haven for West End, the constant presence and influence of his grandparents was no longer there. In its place, however, came the voice of Ke’Shawn Vaughn.

Vaughn, one of the most accomplished running backs in Vanderbilt history, played in front of Marlow for two seasons, racking up 2,378 rushing yards and 24 touchdowns. Vaughn taught Marlow how to be a better running back on the field, but his most valuable lesson was one of doing whatever was necessary to succeed.

“He showed me a lot of resemblance to my brother,” Marlow says of Vaughn. “He’s a kid who didn’t really have much, all he had was ball. He took advantage of all his opportunities and never gave up. Even in school, with academics, I know a lot of times he didn’t like being here, but he had to make the most of it. He always told me ‘you gotta do what you gotta do sometimes just to get where you want to be.’”

Mason also noted the impact that Vaughn had on Marlow and how it has translated to the type of performances the coaching staff envisioned when they recruited him.

“I think him and Ke’Shawn had a good conversation about what it truly takes to be able to play at this level and taking care of your body,” Mason says. “I think the investment by Ja’Veon to take care of his body is really starting to pay off for him. ”

While Vaughn is now in Tampa playing for the Buccaneers, he and Marlow remain in close contact, constantly encouraging each other.

“He was a big impact on me as he was here,” Marlow says. “He always kept it real with me and that’s always what I’ve been used to so me and him just had a great connection. We still talk to this day. He always checks to see how I’m doing, I’m always checking to see how he’s doing. I’ve learned a lot from him and I’m really grateful that I was playing behind him and learning all the things I did from him.”

And yes, Marlow was very excited to see Vaughn score his first NFL touchdown on Sunday, catching a short pass from Tom Brady and taking it into the end zone.

If you asked Vaughn he’d probably be just as proud of Marlow’s performance this season.

On an offense with lots of unproven parts—a new offensive coordinator, a true freshman quarterback and a patchwork offensive line filled with young players and even former defensive linemen—Marlow has been a steadying force and a bright spot. He has recorded 148 rushing yards as well as two runs of over twenty yards, highlighting his big-play ability that the Commodore offense desperately needs.

“What you see is a guy who looks quick and is sharper both in the run game and the pass game,” Mason says. “For me, he’s running through arm tackles and that’s really what you saw from him coming out of high school. Man, he’s explosive. I think that every game that he plays he gets a little better.”

To this point, the running back position has been a platoon with Marlow and fifth-year senior Jamauri Wakefield. Marlow has been the more effective back, but the carries are just about even, with Marlow getting 33 and Wakefield getting 31. The running back room will soon get even more crowded as sophomore Keyon Henry-Brooks is expected to return to the lineup soon. Brooks served as the main backup to Vaughn last year, rushing for 252 yards and a touchdown on 56 carries.

While there is obviously competition among the three for playing time, the trio is very close and has formed a sibling-like bond.

“We’re basically just brothers,” Marlow says. “Jamauri is like the older brother, I’m like the middle brother, and Keyon’s that little brother.”

With Brooks returning to the lineup, Marlow understands his carries may be curtailed. And yet, he appreciates the platoon system that gives Vanderbilt the advantage to constantly rotate fresh guys into the game.

“Our carries are just based on the amount of runs [we’ve each had],” Marlow says. “If I need a blow, Jamauri will come in. And if he goes in and goes for a long drive and needs a blow, that’s how we alternate it right now. It’s pretty much going to be the same with three running backs when Keyon gets back. We’re still just trying to figure out how much of an impact the three of us will be when we all get back together.”

Marlow’s not all that focused on the amount of carries he gets. He’s not really all that fixated on scoring his first collegiate touchdown either, although that will definitely be a high point for him when it comes.

For Marlow, it really boils down to one thing: making the most of opportunities when they arise.