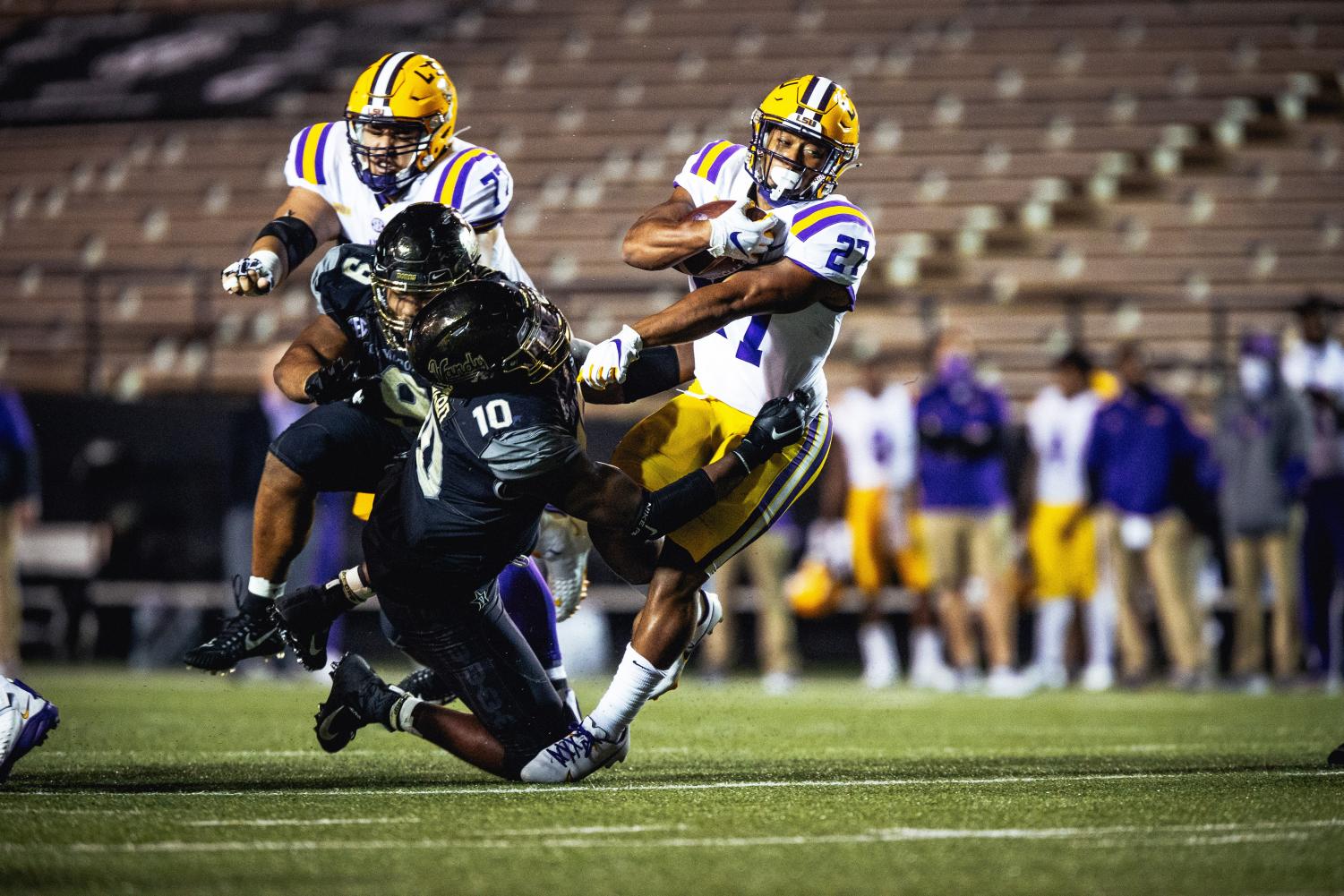 The pendulum swung in Week Two, as the Vanderbilt Commodores were blown out by the LSU Tigers.

The Vanderbilt Commodores looked real good in Week One. They barely lost to the tenth-ranked Texas A&M Aggies. True freshman quarterback Ken Seals looked excellent; the tenacious, tough defense looked even better. Vanderbilt proved that a win against an AP top-25 ranked team is possible. Maybe not probable, but possible.

I could’ve sworn things were looking up.

On Saturday, Vanderbilt looked for every advantage as the 20th-ranked LSU Tigers came to town. They pulled out all the stops, pumping in crowd noise and inviting a “limited” number of students to attend the contest. They even played fine in the first quarter.

But you’ve got to remember: at Vanderbilt, you can always expect the pendulum to swing. You can cross your fingers all you want, and you can try to argue otherwise. At the end of the day, even their head coach believes it. Vanderbilt football will have its ups and downs.

“Vanderbilt is always going to go in waves,” is actually how Coach Derek Mason phrased it. “It just is, man.”

Safe to say, Vanderbilt did not “get it young” in 2020. Nor have they “hit it hot.” They had a pretty good showing against a good Aggies team in Week One. Well, they lost—but it was a commendable loss.

Like I said though, the momentum was short-lived. Finally, Vanderbilt fans felt a sense of normalcy in 2020, as their Commodores got steamrolled by the Tigers in Week Two. There wasn’t much to applaud in a 41-7 loss.

“But win or lose, the fates will choose, And Vandy’s game will be the same.”

Vandy’s game was the same in Week Two. The same it’s been for the past two or three (or six) years. And with the same old loss, comes the same old apathetic Commodore Brunch menu.

I wouldn’t want to eat candy for brunch, either. But the Commodores for the second year in a row had one too many Butterfingers. That ought to explain why the Tigers kept slipping through the grasp of Commodore defenders.

That, or the fact that they kept using one arm.

“I thought our guys just looked a little off,” Mason said when asked about the missed tackles. “Finding angles, I mean, there were some plays to be made. A lot of missed tackles early. Again, you work on fundamentals, you go through these things, but we had a lot of opportunities early in this ballgame to close out and have some good contact for tackles for loss, and we didn’t. I thought we didn’t cut off the edge either, and as our edges got soft, the ball seemed to leak out.”

Mason is right. The tackling did look a little off. LSU running back John Emery had an efficient day on the ground, tallying 103 yards and a touchdown on a mere 12 carries. And the sad part? 59 of those 103 yards came after contact. So 57 percent of his yardage came after the Commodores had an opportunity to bring him down. He would have had 44 rushing yards if Vanderbilt executed its tackles—his 8.6 yards per carry would have been cut almost in half to 4.9.

And alas, 104 of their 161 came after contact. Yes, 65 percent of their rushing totals came after Vanderbilt had a chance to put an end to the play. Now, imagine if Vanderbilt had brought down the Tigers after making contact. Imagine if the fundamentals were there. LSU would have had just 57 rushing yards—as a team.

“We’ve just got to continue getting better at the little things,” Mason said. “Because that was more about fundamentals tonight than anything else.”

It’s the little things, evidently, that they have to continue improving. The same little things they’ve been trying to improve for a few years.

Maybe we spoke too soon on the offensive line.

All throughout the preseason, we worried for Vanderbilt’s offensive line. We watched as four veteran linemen opted out due to concerns over COVID-19. Then we saw Derek Mason move Drew Birchmeier, a defensive lineman, to the offensive line. But in Week One, the offensive line held its ground. They were resilient. They exceeded expectations and gave the offense more than enough time to execute its gameplan.

In Week Two, not so much.

After starting out on a high note again on Saturday, buying plenty of time and creating large holes for the running backs, the Commodores’ offensive line faltered.

This offensive line looks far from the "makeshift" line many expected.

Some great blocking to open up holes early. pic.twitter.com/xItttxftHQ

It hurts to see Ken Seals—the kid praised as the golden child, the true freshman who’s considered the future of this program—take a beating. And while he didn’t receive any terribly jarring hits, the type of licks that make you wince while watching on television, he was squeezed by the Tigers and forced to make a tough decision far too often.

LSU may have only sacked the Commodores twice, but they got to the quarterback 21 times. They hit him seven times. They hurried him 12 times.

With so much pressure mounting, Vanderbilt struggled to string together a solid possession. Time and time again, Commodore playcalls met fierce opposition; Seals would try to roll out, but the Tigers were everywhere. And when the pocket collapsed, Seals made some freshman decisions, opting to lob one into double coverage rather than taking a sack.

“As I talked to Ken just a little bit ago, I just said ‘listen, we’re going to grow as you grow, we’re going to go as you go.’ But the biggest thing that we’ve got to be able to do is just make sure that [Seals] can protect us,” Mason said. “I know [Seals] wants to make plays, but [he’s] got to understand, when we’re in scoring position, just take the points. There are no 24-point plays.”

Is everything OK with Javan Rice?

I know there are other things to discuss in this ballgame. I know this isn’t the end-all be-all of Vanderbilt’s loss. It’s just kicking.

I find it strange that Rice hasn’t had an opportunity, since the backup-punter-turned-kicker, Peirson Cooke, missed a 22-yard field goal yesterday. He’s made one of three field goal attempts this season. Like I said: those two missed opportunities, those six ceded points, haven’t lost Vanderbilt a ballgame. At least not yet.

The Vanderbilt Hustler welcomes and encourages readers to engage with content and express opinions through the comment sections on our website and social media platforms. The Hustler reserves the right to remove comments that contain vulgarity, hate speech, personal attacks or that appear to be spam, commercial promotion or impersonation. The comment sections are moderated by our Editor-in-Chief, Rachael Perrotta, and our Social Media Director, Chloe Postlewaite. You can reach them at [email protected] and [email protected]
All The Vanderbilt Hustler picks Reader picks Sort: Newest
Subscribe
Login
1 Comment
Newest
Oldest Most Voted
Inline Feedbacks
View all comments
J
Jim Dralle

Simon, Good analyzes. Missed tackles on first contact were a huge factor in both games. Vandy in at a distinct disadvantage when it comes to speed. That is typical of a Vandy team, but coaches make no attempt adjust to that situation.