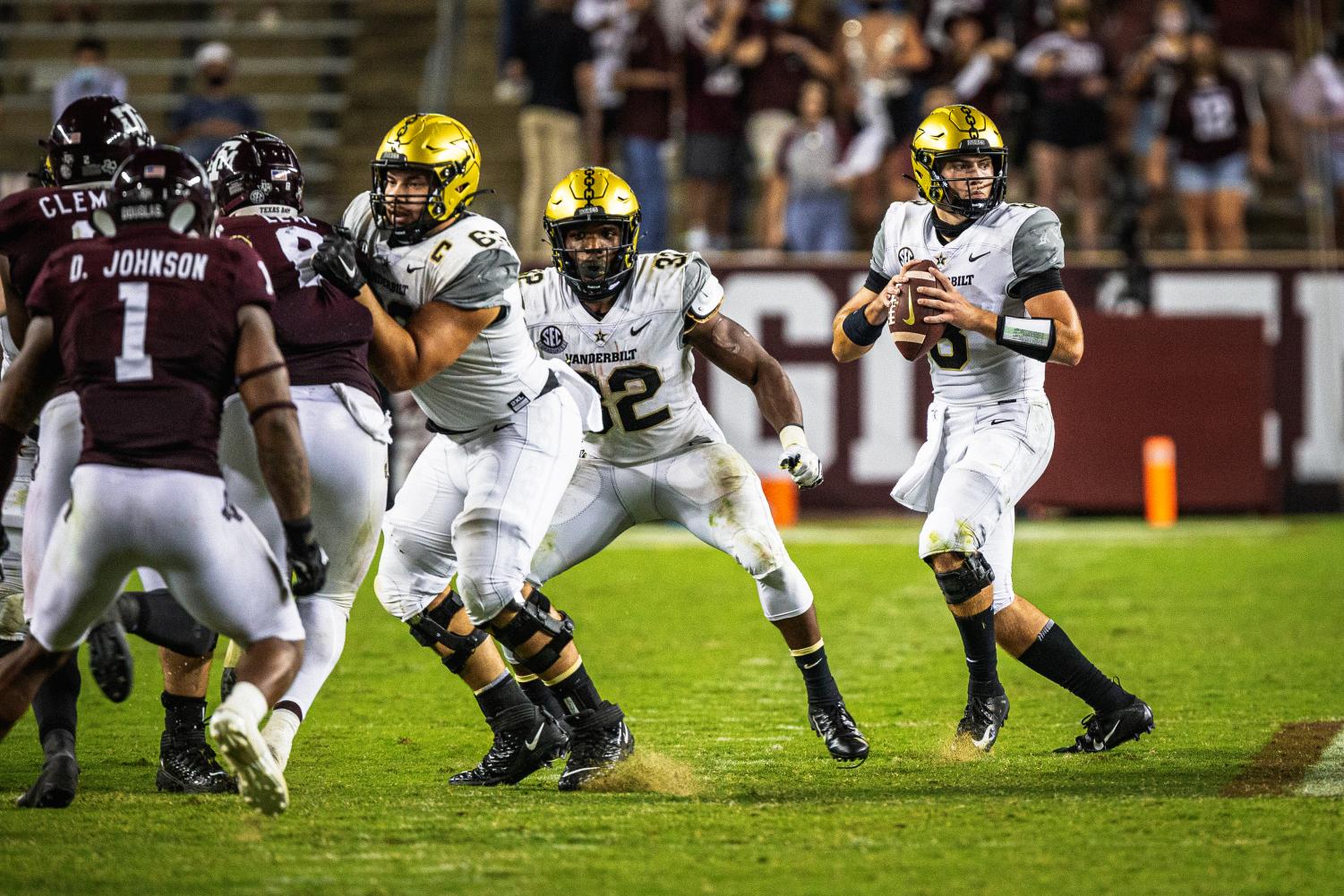 Commodore Brunch Week One: Things are looking up

The Commodores were 31.5-point underdogs against 10th-ranked Texas A&M on Saturday. But their performance—a close, 17-12 loss—showed plenty of promise.

Admittedly, I expected this Commodore Brunch to be a much different story.

A true freshman lined up under center in Vanderbilt’s season opener, just the third to do so in the Southeastern Conference (SEC) since freshman eligibility was restored in 1972 (Brent Schaeffer, Tennessee, 2004 and Bo Nix, Auburn, 2019). Four offensive linemen had opted out due to concerns over COVID-19, leaving nothing but patchwork in the trenches; Derek Mason was even forced to move Drew Birchmeier, a defensive lineman by trade, to the offensive line. Both the linebacking corps and the secondary had been hit by injuries, quarantine and opt-outs, as Vanderbilt’s defense was short five solid contributors entering the contest. A running back by committee, slated to look like a three-headed monster, had lost one of its heads due to illness. The backup punter had won the starting kicking job—yes, he beat out the scholarship kicker. Oh, and how could I forget: after opting out, opting back in and nearly giving fans a heart attack in the process, Vanderbilt’s leading tackler and arguably its best player was ruled out at gametime due to injury.

Then, consider the fact that the Commodores were traveling to College Station, Texas to face the 10th-ranked Texas A&M Aggies. Entering his seventh season at the helm, head football coach Derek Mason has still never beaten a top-ten opponent. Kyle Field, one of the five largest stadiums in college football, was only allowing roughly 30 percent capacity. Still, that’s 30,000 people. And just about all of them were rooting for Texas A&M.

Vanderbilt was a 31.5-point underdog. And frankly, I didn’t think that was crazy. Because all those missing pieces, all those aforementioned reasons, all those holes—that’s a recipe for disaster. I thought this game was over before it had even started.

Sheesh. I couldn’t have been more wrong.

The Commodores showed resolve in a close, 17-12 loss to the Aggies. The new coordinators were excellent. The defense was as tough as nails. The quarterback was as polished as a four-year starter. And while this team is trained to take no moral victories (someone should probably tell that to the athletics’ social media team, who seemed quite content with a loss), there were plenty of positive takeaways from this contest.

This is going to be a tough season for Vanderbilt. A ten game, conference-only schedule means no cupcake teams; it means no free wins, no tune-up games. Just fast-paced, highly competitive football.

But they just gave a top-ten team a run for its money. Who’s to say they can’t do it again?

Senior quarterback Kellen Mond led a disgustingly overrated Texas A&M offense to a mediocre performance against Vanderbilt. Simply put: that was not the offense of a top-ten team.

That said, Vanderbilt’s defense—again, without its leading tackler in linebacker Dimitri Moore—gave them trouble. The Aggies looked frustrated. They looked confused. And they just couldn’t seem to get into a rhythm.

Credit to Ted Roof, Vanderbilt’s first-year defensive coordinator, for his play calling. He held the Aggies’ offense to just four of ten on third-down conversions. His players just seemed looser, more laid back in his scheme. Commodores’ safety Dashaun Jerkins all but confirmed that in the postgame press conference.

“Our scheme, it really just allows us to fly around the play rather than thinking about it as much as in the past,” he said. “Letting us go with what we know and what we do best, it really helps us play our best.”

But in truth, Roof’s job was made easier on Saturday thanks to the help of some playmakers. Like Jerkins, who notched eight tackles (four solo) and recovered a fumble. Or Anfernee Orji, a safety-to-inside linebacker convert, who had six tackles. Or star defensive end Dayo Odeyingbo, who put on a show: seven tackles (four solo), a sack and two tackles-for-loss. What stands out about Odeyingbo’s play, though, and what proves that he’s capable of playing on Sundays, won’t really show up on the stat sheet.

Odeyingbo lined up on the edge, but he flew around the field like a middle linebacker. It didn’t matter if a running play was drawn up on the opposite side of the line. He’d find his way through the offensive linemen, before ending the play either on top of the running back or nearby—despite him being 15-plus feet away from where he began.

And how about Andre Mintze? Again, his play won’t show up on the stat sheet, as two tackles (one solo) and a tackle-for-loss is nothing to write home about. But Mintze and Odeyingbo proved to be a lethal combo setting the edges, even without Moore, the anchor of the defense, in the mix. 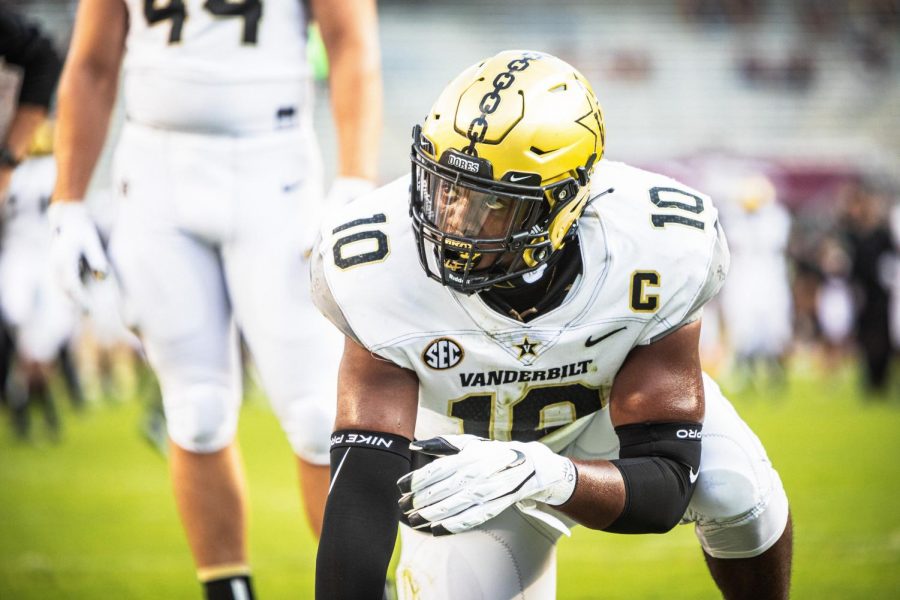 Credit where credit is due. The Commodores’ defense applied pressure. They forced five—yes, five—fumbles, recovering three and giving the offense a chance to punch it in. Had they converted on the toss-up interceptions, this may have been a different ballgame.

You’d think this is the first item on the menu, judging by Vanderbilt fans’ reaction. But it’s not, and it shouldn’t be. Quarterback Ken Seals completed 20 of 29 passing attempts for 150 yards, a touchdown and two interceptions. And while he played infinitely better than his stats suggest, the defense was the story of the game.

That’s not a knock on Seals, though. Vanderbilt fans seem to have fallen in love with their quarterback of the future and understandably so; the true freshman looked like a seasoned veteran in his first collegiate showing.

Seals was cool, calm and collected. He delivered throws on the dime. He found the open man time and time again. He did everything in his power to keep Vanderbilt in this ballgame. He looked fantastic, and he proved that this quarterback “competition” may have never really been much of a competition after all.

He’s a great quarterback. And damnit, after last season, I had almost forgotten what it’s like to have one of those in a Vanderbilt uniform.

Seals did throw two interceptions; one was a heave into coverage that was tipped and picked, the other was what Mason described as Seals “short-arming” it (he didn’t, it was very clearly a miscommunication between Seals and Cam Johnson, who ran a route that Seals was not expecting). And Vanderbilt did lose the ballgame.

After the game, Seals had the chance to address his performance in the postgame press conference. That might be, at least in my eyes, the most reassuring part. Because he was pissed off.

“It’s games like these that hurt. They leave a bad feeling in your stomach,” Seals said. “You’ve got to embrace the discomfort that comes from games like this… I don’t think that because we were in the game, we were satisfied. But I do think that it puts notice to a lot of people around the league and around the conference that this isn’t the same Vanderbilt that they’ve played in the past.” 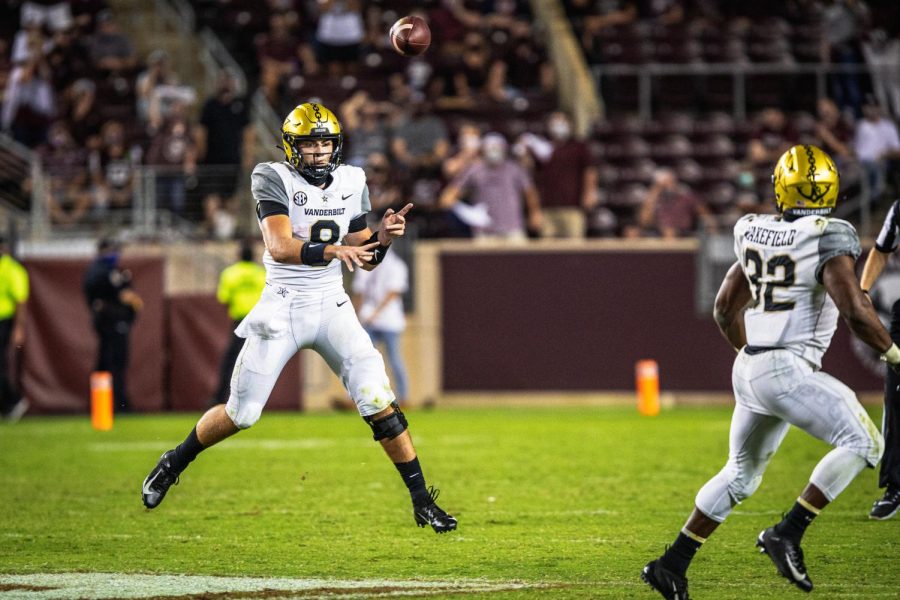 He wasn’t satisfied in the slightest. He cracked a smile when talking about his first career completion, like he did recollecting his first career touchdown throw. But he was largely stone-faced. He was frustrated. That’s what you want from your quarterback of the future.

“Obviously, it hurts to think about the missed opportunities,” he said. “I know that us, as an offense, we’re going to go back this weekend and watch the film, learn from it and make sure something like this doesn’t repeat itself. It can’t become a problem. We have to get it fixed.”

Vanderbilt hasn’t had the chance to say this in years, but the future sure looks bright at the quarterback position.

Presumably, those errors will vanish as the season continues. These two teams will find their footing. But Vanderbilt might not have even been in this game if not for some inexplicable, boneheaded, ridiculous mistakes from the Aggies special teams unit.

It started on Vanderbilt’s first kickoff of the game, which must have sailed at least a couple yards into the end zone. And I can’t possibly tell you why, but the Texas A&M kick returner took the ball out of the end zone. Obviously, he didn’t make it very far and set up the Aggies’ offense in absolutely horrendous field position.

It allowed Vanderbilt’s offense to set up in good field position. The worst part? When Vanderbilt punted next, the circus act continued.

This time, the ball must have traveled even further into the end zone. There was literally no reason—none at all—for this Aggie to try taking the ball out. But he didn’t take a knee in the endzone, nor did he call a fair catch. He ran. And he didn’t make it very far. What would’ve been terrible field position (again) for the Aggies’ offense was actually made worse, when his teammate was flagged for an illegal block in the back in their own endzone. Meaning Vanderbilt, fresh off a punt, was awarded two points via a safety call and would receive the ball.

Vanderbilt made some mistakes of its own. Primarily, the tackling woes.

Tackling had been a topic of concern in the past. The Commodores struggled to wrap up opponents in the open field, even when the opportunity is as clear as day. On Saturday, that trend continued. Hopefully, it’s just temporary.

And of course, the unsportsmanlike conduct penalty called on Derek Mason. As Texas A&M chewed the clock on its final drive of the game, Mason tried calling a timeout. Evidently, the referee didn’t hear him. So he kept yelling. And maybe he yelled something he shouldn’t have.

Not much to say other than the obvious: that can’t happen. Under no circumstance is that permissible from a head coach. Sure, Vanderbilt had already lost the game, but that’s a mistake that Commodore fans can only hope was part of the first game jitters.

Next week, the Commodores will host the defending national champion LSU Tigers. And somehow, after LSU’s ten point loss to unranked Mississippi State, the Commodores head into the contest with a better point differential.