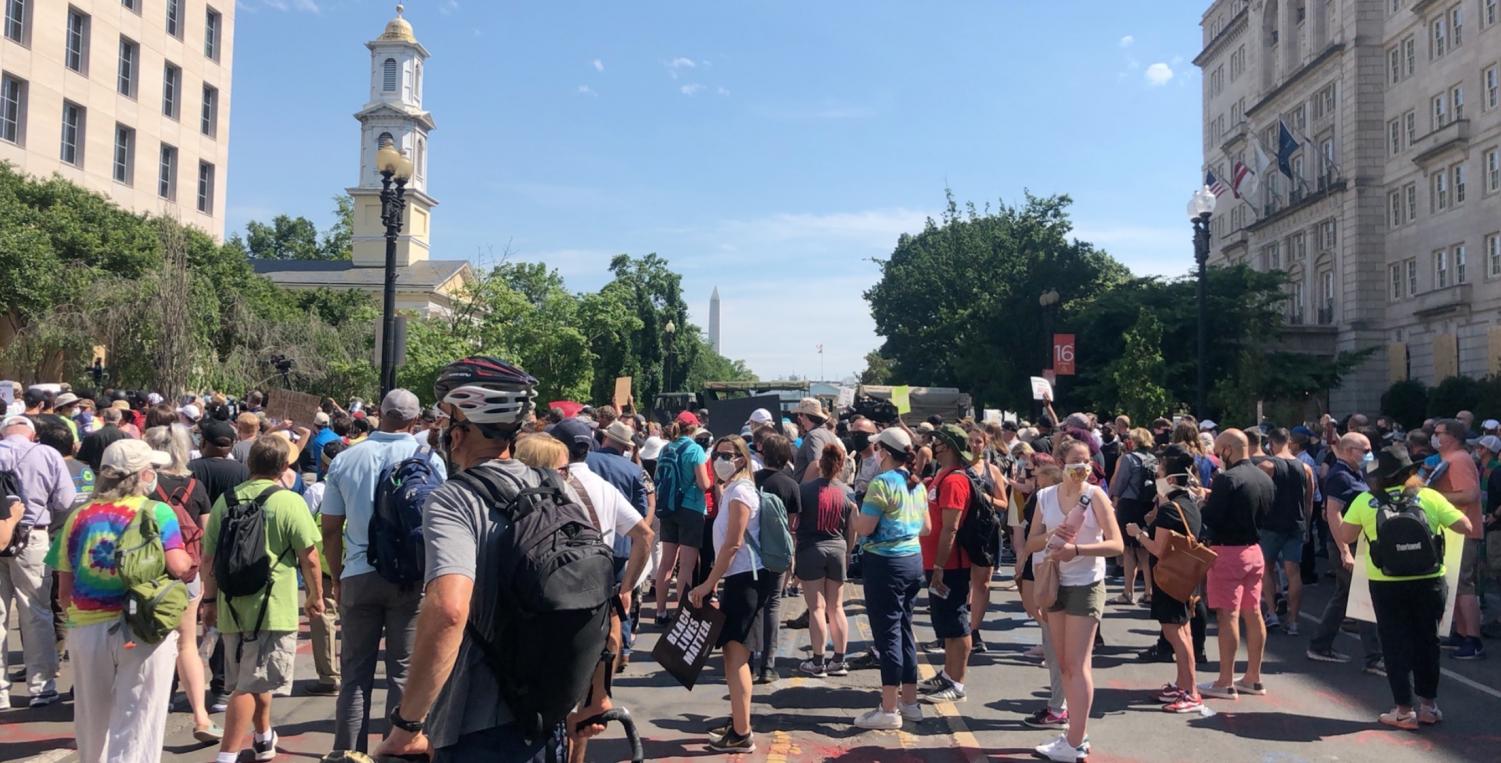 A breakdown of the anti-racism Instagram stories on your feed

Social media has an unprecedented role in the fight against police brutality and racial injustice in the United States. To help you better distinguish the movements circulating on your feed, the Life section has broken down each of these popular Instagram posts and the messages they’re spreading.

A wave of support for the Black Lives Matter (BLM) movement and other anti-racism initiatives has swept social media platforms since the killing of George Floyd in Minneapolis May 25. Today, hundreds of thousands of Instagram stories have been reposted in solidarity on people’s accounts, but it can be all too easy to click “Add post to your story” without taking the time to research the initiative behind the graphic you’re promoting. Read on to learn about the real-life movements and people who created the posts you see on your feed.

A social media blackout initiative gained unprecedented traction on Instagram this Tuesday (Jun. 2), with everyone from high-profile influencers to students posting a black square on their Instagram for #blackouttuesday. The tag now has over 28 million uses. According to The New York Times, the initiative was organized by two black women in the music marketing industry, Jamila Thomas and Brianna Agyemang. Spotify and SoundCloud are just two of the brands that released statements Monday stating that they would cease most operations the next day in light of the George Floyd protests.
The industry’s initiative, #TheShowMustBePaused, soon expanded to individuals who intended to show their support for the broader movement against racial injustice and began to append #blacklivesmatter onto their black squares. Some activists argued that the use of the BLM tag during the blackout drowned out the educational information that was BLM-endorsed. Instagram’s feed algorithm is not chronological, so the black squares ran the risk of muting these posts for days to come. Early Tuesday (Jun. 2), a tweet with almost 12,000 retweets by @lilystgermain called out those using the #blackouttuesday square without making a tangible effort in the movement.

This Instagram story tag chain has been particularly controversial, with many arguing that, on its own, it does not actively support the BLM movement or George Floyd’s case because the trend does not include sharing resources, simply tagging friends. At this point, it is extremely hard to tell which account the chain originated from, but it generally encouraged viewers to tag ten accounts alongside the hashtag #blacklivesmatter. Many users who were tagged took the chain in a different direction, either including #JusticeforFloyd or linking to a donation site. Eventually, the trend’s lack of unification lent to it being accused of performative activism and with its original intentions unclear. High-profile celebrities such as Cara Delevigne, Kendall and Kylie Jenner have been criticized for participating in such Instagram chains.

Color of Change is a nonprofit civil rights advocacy organization in the U.S. which aims to push decision-makers in corporations and government to lessen hostility against the Black community, according to their mission statement. Their Instagram platform has over 500 posts that use artistic design to campaign against practices that inhibit the progress of Black people in America. A graphic by one of their designers, Robin Hilkey, was posted May 27 with the hashtag #JusticeforFloyd and now has just under 500,000 likes. The post is captioned with information surrounding the crime and an appeal to Jacob Frey, the Mayor of Minneapolis, to ensure the officers do not receive their pensions and are banned from future employment.

An Instagram creator who goes by Shirien on her page, @shirien.creates, used her skills in design and illustration to create a post May 26 honoring the late George Floyd. Her artwork, which she shares with over 276,000 followers, first began to gain traction in early May when she posted a similar graphic in memory of Ahmaud Arbery, who was a victim of racial profiling. Her Floyd post now has over 3.4 million likes, and Shirien continues to post artwork in support of the BLM movement.

Cut’s video: “Black parents explain how to deal with the police”

Cut, a social community brand that has over 10M YouTube subscribers, originally posted this five-minute video in 2017 as a part of their “Parents Explain” series. The video highlights Black families conversing with their children regarding personal anecdotes and precautionary measures that must be taken when interacting with the police as a Black individual. Cut reposted the video on their Instagram this past Saturday (May 30) with the hashtags #justiceforgeorgefloyd and #blacklivesmatter. Upon being shared by Vanessa Grimaldi, winner of the 21st season of The Bachelor, it gained over nine million views on her account, a significant jump from the two million views that it originally had on Cut’s YouTube. Her caption, “If you are white, please watch,” has been heavily reposted in an effort to spur action.

Desmond Tutu is a Nobel Peace Prize award-winner and a renowned South African Anglican cleric who has been applauded for his efforts in drawing national attention towards the opposition to apartheid in South Africa. This graphic, which was illustrated and reposted under five color schemes, was created by the Instagram account @stuffgracemade and now has almost 500,000 likes on the platform. The artist has since created downloadable flyers and apparel displaying the graphic for purchase on her website. All proceeds will go to BLM organizations, though no further specification has been made according to an Instagram story Wednesday.

This easy-to-digest graphic was created by Ella Mosco, a resident of New York City, and shared on her Instagram. The illustration highlights six organizations that are accepting donations towards efforts to end racial injustice: George Floyd Memorial Fund, Minnesota Freedom Fund, Black Visions Collective, Reclaim The Block, Campaign Zero and Unicorn Riot. Proceeds towards the George Floyd Memorial Fund go directly to the victim’s family. The Minnesota Freedom Fund primarily pays bail and immigration bonds for those who have been arrested while protesting police brutality within the community. Black Visions Collective seeks to make long-term change by dismantling systems of oppression and violence. Reclaim The Block is a Minneapolis-based coalition, which invests in safety initiatives for the neighborhood. The prior three campaigns have asked that donations be redirected to a separate fund. Campaign Zero focuses on research-based policy initiatives to end police brutality. Unicorn Riot is a media collective dedicated to publicizing the root causes of both environmental and civil rights issues.

Senator Zellnor Y. Myrie is a Brooklyn native serving in the 20th Senate District of New York. Zyrie and Assemblywoman of the 43rd Assembly District Diana C. Richardson attended the protests just outside of the Barclays Center in the joint fight against racism on Saturday. The pair were pepper-sprayed and handcuffed at the venue by officers, and Myrie shared an emotional photo of the incident on his Instagram. The post has now garnered over 175,000 likes and has been cited as an example of police officers’ racial profiling at recent demonstrations.

“I understand that I will never understand. However, I stand with you”

This quote has been heavily circulated throughout Instagram by those outside of the Black community who want to show support and activism against racial injustice. The exact origin and author are unclear, however, most posts are paired with a similar graphic depicting two hands of different races joined by a finger to signify unity in action. Influencer Cameron Porras gained particular traction with his post which now has just under 50,000 likes.

With overuse, these relevant Instagram graphics that carry powerful calls to action can lose their meaning. In order to be an ally, it is critical to do your research and educate yourself on the message behind the artwork you’re reposting before sharing it on your social media page. In that way, we can ensure we are engaging in constructive change towards the mission we’re promoting, rather than just amplifying an Instagram trend.