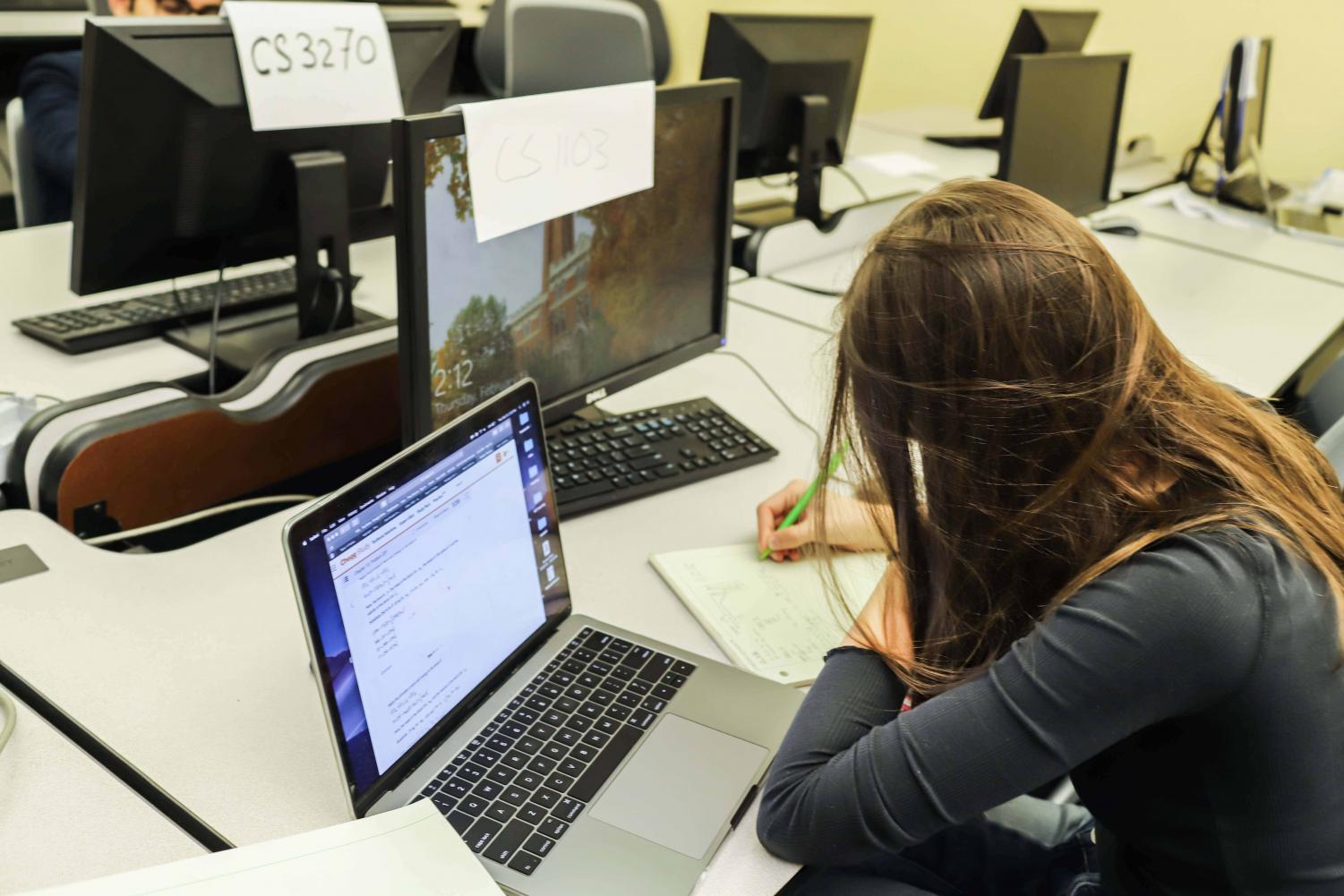 Q&A: TA Experiences and class difficulty— How do they compare?

Patrick Mills ’20 and Rachel Rosenberg ’21, teaching assistants in the Music and Biology Departments respectively, share personal views and experiences on their leadership roles at Vanderbilt.

In everything from organic chemistry to multivariable calculus, teaching assistants play an undeniably crucial role in providing students with academic aid during the most challenging classes at Vanderbilt. They not only preserve their understanding of the courses they took but also sacrifice substantial time to meet the needs of their students and professor. Despite how busy a TA might be on a day-to-day basis, the demands of TA roles in various departments seem unclear. Should certain TAs receive different privileges for required tasks specific to their particular course? For example, certain STEM courses include labs that TAs oversee, but music TAs might have to spend more hours with students on music reviews. Rachel Rosenberg ‘21, TA for Biology Today and Human Biology Labs, and Patrick Mills ’20, TA for Music of the 20th and 21st Centuries, shared some of their thoughts in a Q&A session.

Vanderbilt Hustler: How demanding is your role as a TA?

Rachel Rosenberg: My role as a TA is not very demanding at all. I work about six to seven hours a week, with three hours in the lab, one TA meeting, an office hour for students, and one to two hours spent grading assignments. Some professors I’ve TA-ed for have also asked me to come up with assignments and quizzes, which adds on a couple more hours, but for the most part it’s pretty easy to manage my time and get all of my work done quickly.

Patrick Mills: Overall it wasn’t too demanding of a role. I had to work five hours a week; there were five or six listening tests, two exams and two writing projects. Before each of the exams and the listening tests I was required to hold review sessions. I collaborated with the TA of the other section to make a review sheet and organize meeting times. We graded a lot of assignments too. There were easier weeks where all I had to do was go to class and record attendance, but I was also expected to answer any questions out of class.

VH:  What is your perception of the class you are a TA for in terms of its difficulty?

RR: In my opinion, the difficulty of any class is subjective and is dependent on both the difficulty of the actual content as well as the way you’re being taught the information. For my class, I’m definitely biased towards thinking it’s on the easier side, because I’ve spent three years at Vandy taking biology classes to fulfill my major. So relative to the caliber of the bio classes I’ve taken, it seems easier. For non-STEM students, who typically makeup the demographic of the class, it might be a little challenging, especially if they haven’t taken a science class since high school. I’ve noticed that the students that do the best in the class are the ones who are constantly asking questions, showing up to office hours and actually trying to learn the material, rather than just regurgitating the correct answers from their lab guides. Like any other class, the difficulty of the class depends on how much effort students are willing to put into it.

PM: I teach a music literature course that’s required for all sophomores in Blair. It’s one of hardest but rewarding classes in the school; People think it’s hard because Professor Calico teaches it like a Vanderbilt humanities course instead of following the style of traditional music courses. However, it catches students off-guard because it’s registered as a music class and students have different expectations for what that means. That being said, Professor Calico provides very clear expectations and wants students to succeed. There is a lot of content, but it’s doable and rewarding if you put in the effort.

RR: I was asked by professors in the Biology department to become a TA, and the lower level biology courses just worked better with my schedule time-wise. The feasibility of the workload definitely swayed my decision in becoming a TA for a class that is not seen as very difficult, rather than taking up a position that might be harder. I also felt that I understood the material well enough, making it easy to explain to non-STEM majors. I knew with my other leadership and organization involvement alongside my heavy class load that I did not want to take on a role that would feel overwhelming, so TA-ing for the lab class provided the perfect balance of low-middle commitment while still getting paid for your work.

PM: I really enjoyed being with Professor Calico and found the class to be very rewarding. I loved the class material and thought teaching would reinforce it in my own mind and allow me to learn even more about the subject. The difficulty of the class maybe had an indirect influence on me taking the role, because it was taught exactly the way that I would teach it. I think of part me felt it was a difficult class too and wanted to make it as easy for people to get through as possible. I also liked being a TA because it helped me become more aware of the difficulties professors face.

VH: Do you think all TAs should be seen as equals despite differences in class difficulty?

RR: While some TA positions definitely require different amounts of commitment, work, knowledge-base and student interactions, every TA is dedicating hours of their week towards the learning of their peers. Each TA position is important for both the professor in charge who needs an extra hand as well as the students in the class that lean on the TA for assistance when the professor can’t adequately provide help. I don’t think that the caliber of a class should determine the relative importance of each TA, rather than just seeing it as a reflection of differences in our lives and ability to commit to certain obligations while balancing out all of our other time commitments at the same time. I think how well a TA is doing within their specific position and realm of expertise is far more relevant than drawing comparisons across dissimilar classes simply because one is viewed as harder or easier than another.

PM: I’m not going to say yes or no, because the motives for every TA are different. Some people get involved just to have a source of income, but others do it because they really enjoyed the class material and want to guide others. I think the difficulty of the class has nothing to do with the motive of wanting to help people learn the content. For me, being a TA involves a lot of effort, but that’s hard to see in others.