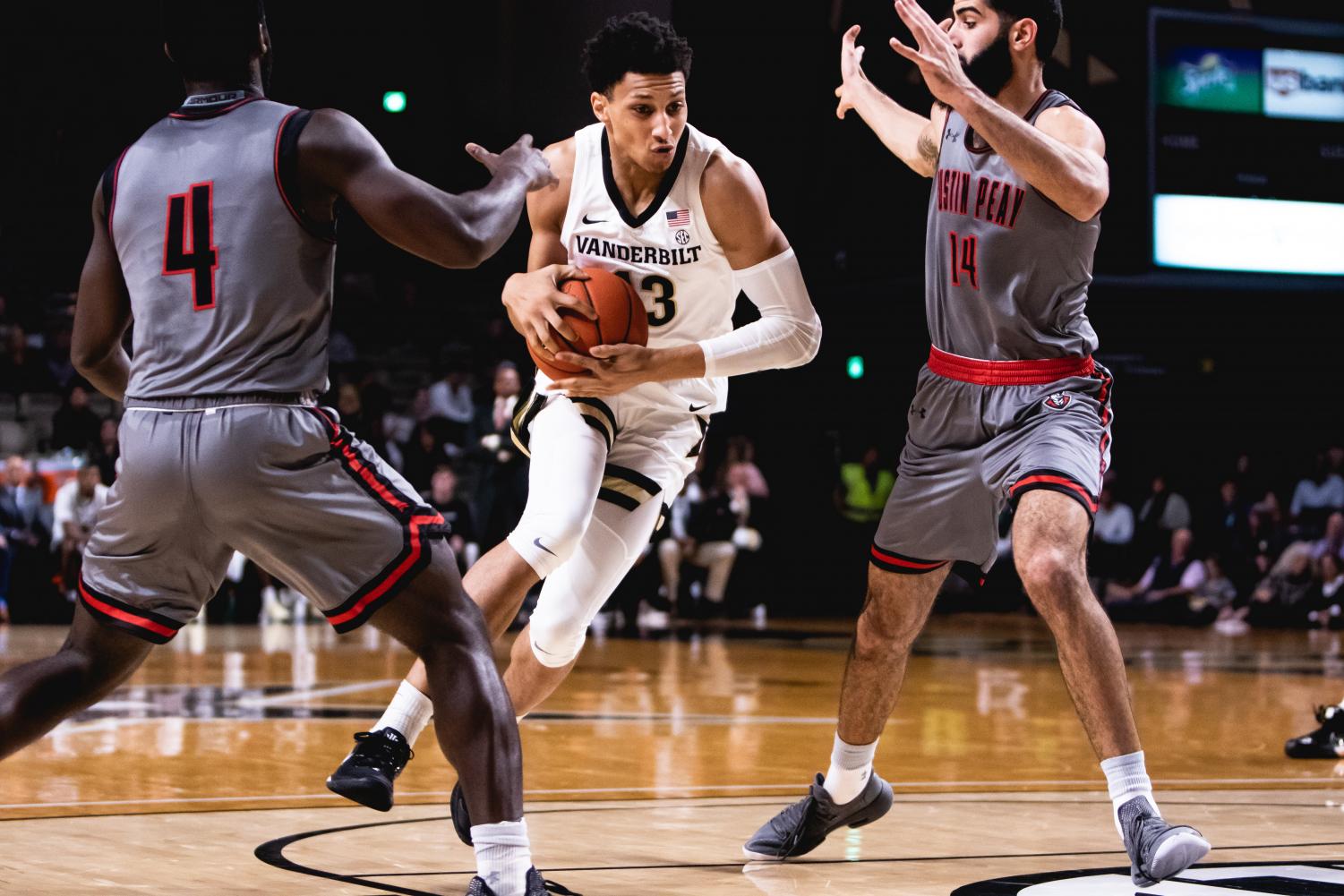 Matthew Moyer drives into the lane in Vanderbilt’s win over Austin Peay in November. (Hunter Long)

Matthew Moyer drives into the lane in Vanderbilt’s win over Austin Peay in November.

Maestro of the Moment: How the violin keeps Matthew Moyer prepared

From a Sweet Sixteen to an 0-18 conference campaign, Matthew Moyer has learned to stay in the moment with the help of the violin.

The violin is an instrument that requires perfection. When the wrong note is strung, or a finger is misplaced, the result will be glaring to the audience.

Basketball is a game of imperfection. It’s a game that requires a short-term memory and that forces mistakes by nature. Those mistakes can be costly, but they also create opportunities to learn, recover, improve and grow.

From a young age, junior Matthew Moyer was seen as a basketball player. His size, athleticism and stature all screamed star athlete.  However, the violin was actually Moyer’s first passion.

“I started playing the violin at about the age of six,” Moyer said. “The why is definitely my parents. They wanted me to be a cultured Black man and growing up not being stereotyped into one category.”

The violin represented the opportunity to be unique for Moyer. It offered him the chance to stand out amongst his peers on the basketball court, but also to be a more well-rounded and cultured young man, per his parents’ wishes.

“Growing up when kids found out I played violin it was almost like, ‘What? Matt plays violin? He is a basketball player.’”

As he matured, Moyer applied the lessons he learned from playing the violin to his second passion—basketball. These skills weren’t about the technicals of basketball, but rather how to be prepared, calm and precise under pressure.

The violin became a way for him to escape the stresses of being a basketball player. In high school, he played the violin before every game in order to help put himself in the right frame of mind to dominate on the court.

Moyer did not begin his career here on West End. Although he arrived to Vanderbilt with ample high school success, his exit from Syracuse was taxing, and the violin consistently helped him escape the stress of his transfer.

As a high school standout at South Kent Prep, a private school in Connecticut, he took home Connecticut’s Gatorade Player of the Year honors. He then committed to Hall of Fame head coach Jim Boeheim at Syracuse University after a host of collegiate offers and expected his career to take off.

At Syracuse, he was immediately forced to be patient when he decided to redshirt his freshman season because of an injury that caused him to miss preseason time. Although a difficult decision, Moyer trusted his advisors and came into his second year at Syracuse ready to perform.

After a long offseason of preparation, Moyer swiftly entered Boeheim’s rotation, starting his first 20 career collegiate contests. He was playing over 20 minutes per game as a freshman on a talented Syracuse team, while embracing the full Syracuse experience as a broadcast media journalism major.

Then came a poorly timed injury that sent Moyer’s freshman season into a whirlwind. In a game against Boston College, Moyer lasted only five minutes before being sidelined with what appeared to be a serious ankle injury. He was told it would be a four week recovery process. But, much to the surprise of his teammates and Coach Boeheim, Moyer said he was ready to return just one week after suffering the injury.

Moyer returned for three games, still not at full strength, before deciding with Boeheim that he needed more time to recover. He missed the team’s next game against Wake Forest and proceeded to play sparingly throughout Syracuse’s final 12 games.

In the span of just three weeks, Moyer went from a steady starting contributor on one of the premier teams in the country to a bench player who had lost his spot in Syracuse’s rotation.

Moyer announced his intentions to transfer in March 2018 with hopes of finding somewhere he could be given an opportunity to once again find a starting role. His main priority was a fresh start, and he saw the chance for one in Nashville.

“As soon as I saw this opportunity, I jumped on it,” Moyer said. “The combination here of basketball and academics I think separates it in a league that only a few schools are in. Coming here, getting a fresh opportunity and a fresh start means a lot especially coming from Syracuse.”

It’s no secret Moyer had an abrupt transfer from Syracuse. After quickly carving out a clear role for himself at Syracuse, the 6’8” forward found his future clouded upon arriving to Vanderbilt as he prepared for a second redshirt season and a completely new team. However, in what seemed like his first break in months, Moyer was granted eligibility by the NCAA just two games into the 2018-2019 season.

Moyer went on to play 31 games during his first year in Nashville in a troubling season for Vanderbilt. All Moyer had ever known was success; his high school and Syracuse were both accomplished programs. His first season as a Commodore was a bit different as Vanderbilt suffered through an 0-18 league campaign.

This season, he has served as a team captain along with sophomore Aaron Nesmith, fellow junior Saben Lee and senior Clevon Brown.

However, even as a captain, Moyer’s maturity has been tested. Sixteen games into this season, Moyer has neither started nor played more than 20 minutes in a single game since the Commodores season opener.

“Being prepared mentally and physically,” Moyer said. “That’s another thing that goes along with my experience that helps me be prepared for every game and knowing what I have to do. It doesn’t matter about starting or whatever, just being prepared regardless of when the opportunity comes.”

His patience and preparedness will pay off soon; with forward Clevon Brown and guard Aaron Nesmith both out with injuries, Moyer will get a chance for more minutes in the coming games against larger and more athletic SEC opponents.

“Matt is one of those guys who has to avoid the noise,” Head Coach Jerry Stackhouse said. “He can come in and has some length and has the ability to shoot the ball and do some different things, but has to be able to do it within the context of how we want to do it.”

From his first day at Syracuse to the present day at Vanderbilt, Moyer has faced more adversity than most college basketball players. At first, his trials and tribulations with college basketball may have been daunting. But slowly, he began gleaming simple lessons from his experience earned a captain role for the Commodores this season.

“I think at this point I am the oldest on the team and I feel like I have been there, done that from the standpoint of having my ups and downs in my college career,” Moyer said.

Extremes have been a theme throughout Moyer’s three years of college basketball. But here at Vanderbilt, Moyer is slowly finding consistency both on and off the court. Through an injury, a transfer and an 0-18 conference record, Moyer is poised for whatever adversity comes his way not only on the basketball court, but in life.

“I have been to a Sweet Sixteen, but I have also been on a team that hasn’t won a conference game,” he says. “The extremes of my career have made me realize that it is just a game. You go out there, play it, have fun and don’t stress yourself out about it.”

Because Moyer knows that sometimes he’ll play the wrong note, but when it all comes together, the payoff can be a masterpiece.

The Vanderbilt Hustler welcomes and encourages readers to engage with content and express opinions through the comment sections on our website and social media platforms. The Hustler reserves the right to remove comments that contain vulgarity, hate speech, personal attacks or that appear to be spam, commercial promotion or impersonation. The comment sections are moderated by our Editor-in-Chief, Rachael Perrotta, and our Social Media Director, Chloe Postlewaite. You can reach them at [email protected] and [email protected]
All The Vanderbilt Hustler picks Reader picks Sort: Newest
Subscribe
Login
1 Comment
Newest
Oldest Most Voted
Inline Feedbacks
View all comments
K
Kim Baumann

Great article! I was Matthew’s kindergarten teacher. Way back then, he was a hard working student, a nice boy and a friend to all. He comes from a wonderful family who supports him in every area of his life. Best of everything to Matthew!