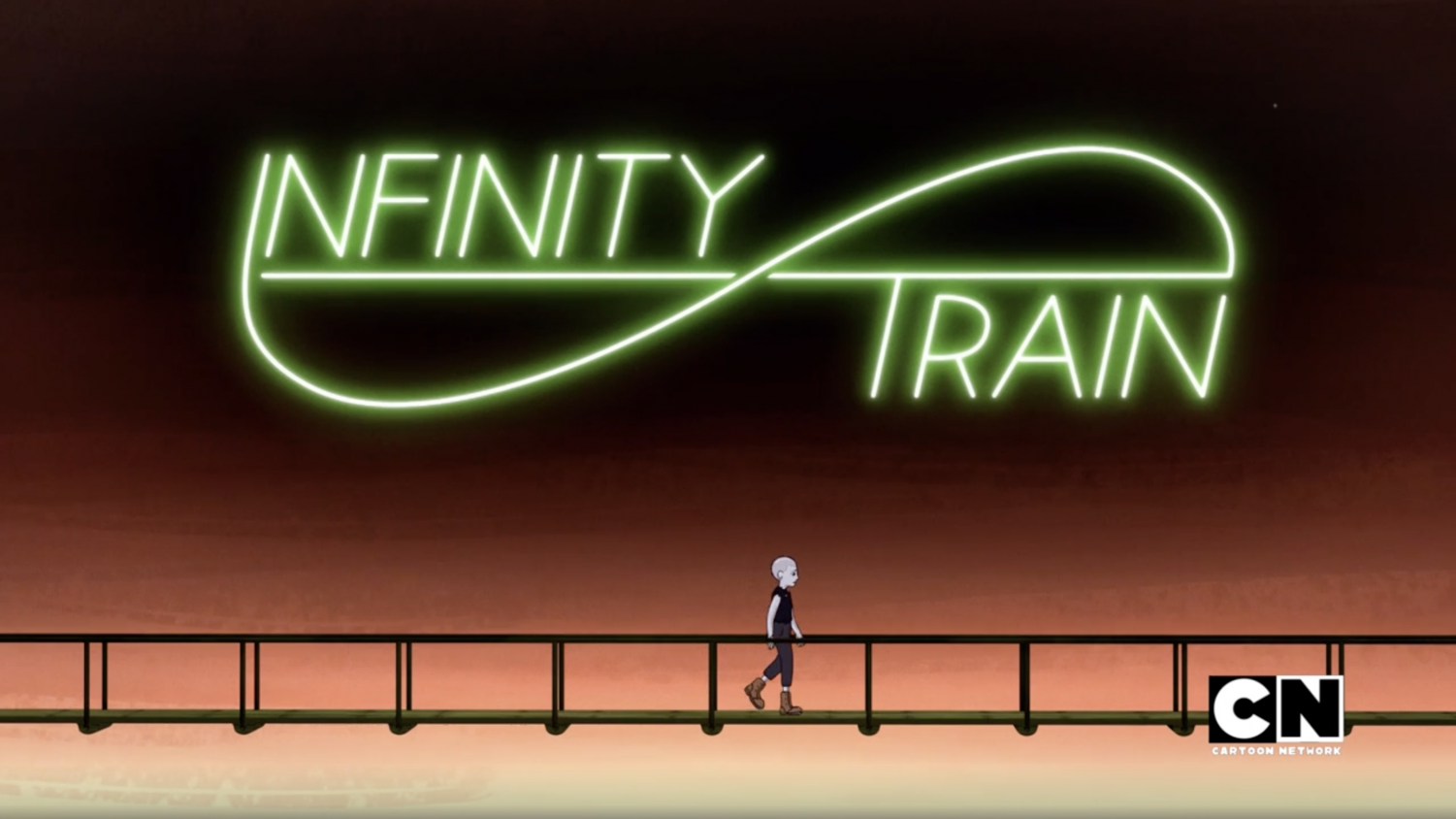 The intro sequence from the first episode of Book 2, “The Black Market Car,” shows MT setting off on her own adventure through the train cars. It’s set to a new musical theme for the new season, scored by synth artist Chrome Canyon.

The intro sequence from the first episode of Book 2, “The Black Market Car,” shows MT setting off on her own adventure through the train cars. It’s set to a new musical theme for the new season, scored by synth artist Chrome Canyon.

After much speculation about a second season, Cartoon Network’s well-received animated series “Infinity Train” returns with a brand new story that proves to be much more than just a reflection of season one.

Last August, Cartoon Network’s “Infinity Train” finally fueled up and left the station as a full-fledged ten-episode anthology series. The show had been widely anticipated since its pilot short debuted in 2016, and it lived up to expectations, garnering critical acclaim for its voice acting, soundtrack and animation.

The show follows Tulip Olsen (voiced by Ashley Johnson), a 13-year-old girl from Wisconsin who has run away from home, struggling to come to terms with her parents’ recent divorce. She stumbles aboard a mysterious train she encounters in the woods and quickly finds it has an infinite number of cars, each of which contains its own unique pocket universe. Every decision she makes lowers or raises a mysterious green number on her hand.

As the show progresses, Tulip learns that the train is a metaphysical space that appears to people who have unresolved problems or trauma. The train’s challenges help them realize, confront and solve those problems, at which point their green number reaches zero, and they are allowed to exit.

Book 1 ended satisfactorily, as Tulip accepts that the divorce was not her fault and learns a valuable lesson about her own self-worth. This left fans wondering about the many possibilities for Book 2: would we see a new protagonist enter the train with a new problem to overcome?

The Book 2 trailer gave us exactly that in the form of 15-year-old jock and crowd-pleaser Jesse Cosay (voiced by Robbie Daymond), but we also saw a familiar face. In Book 1’s “The Chrome Car” – a pocket world where every surface is reflective – Tulip’s reflection, known as Mirror Tulip or MT, escapes into the real world and ventures through the train on her own.

Thus, Book 2, released the week of Jan. 6 two episodes per night as a five-night special event, would feature MT and Jesse as dual protagonists, with Jesse set to learn a lesson about standing up for his values and MT on a journey to prove her personhood and get off the train.

An emotionally turbulent saga awaits. As MT and Jesse traverse countless cars with strange and exciting worlds, MT faces countless scenarios in which others toss her aside because she isn’t a passenger like Jesse.

The Mirror Police, Mace and Sieve, are hot on her tail and seek to sand her out of existence. People call her names like “sliver” and “null.” She even shies away from introducing herself as MT to anyone new, since the name suggests she’s nothing more than a reflection of Prime Tulip or a mere construct of the train, no matter how often she proves she is her own person.

Jesse and MT’s stories complement each other in wonderful ways. Jesse is the quintessential crowd-pleaser, always doing what others expect of him and never deviating from societal norms, though sometimes hurting his loved ones in the process. Meanwhile, MT does everything she can to be her own person and is told every step of the way that she can never escape from the shadow of her prime self.

The friendship that forms between Jesse and MT, and the resulting ways in which they learn and grow from each other’s parallel struggles, makes it easy for us to see ourselves reflected (pun intended) in their journeys of self-discovery.

Jesse represents every time we shy away from what we truly want to do or be, simply because society might view us differently for it. By the end of the series, he learns that the things he wants from life are just as important as what others expect of him and that he should work for his own personal goals with all his being.

On the other hand, MT becomes a symbol for all the people who have ever been told they can never be more than where they came from. While she had been literally trapped in a mirror and Jesse only figuratively, both were shackled by their respective homes, and both must find their own ways to break free.

In the end, a great story is nothing without great actors behind it. Ashley Johnson’s superb voice acting as MT realistically creates the various emotions MT feels, be they urgency, helplessness or friendship. Her existential debates, particularly with Mace in “The Wasteland,” allow you to see inside her mind every time she’s brought to tears and her voice cracks. Her final breakdown in “The Tape Car” provides a similar effect.

Additionally, the phenomenal soundtrack, scored by synth artist Chrome Canyon, gives off a heavy “Blade Runner” or “Stranger Things” vibe, with analog flourishes – some eerie and mournful, others grand and hopeful – coming in at just the right times to add that extra layer of emotion.

All these moving parts come together with smooth and flowing animation to produce a brilliantly poignant and powerfully transcendent story about two young kids finding themselves in a world that desperately wants them to stay lost.

The Book 2 ending was quite a doozy.

Hot off the heels of six episodes of heartwarming and realistic character development in which MT and Jesse resolve they will leave the train together, a gang of passengers who refuse to leave the train betray MT to the Mirror Police. Jesse’s final act of solidarity in choosing her over the gang’s enticing offer brings his number down to zero, and his exit opens. MT, however, can’t go through it, and she and Mace fall into the barren wasteland surrounding the train.

After some soul-searching and a surprisingly brutal murder scene that led many to classify the show as part horror, MT formulates a new plan: get herself a number and get an exit. When the number machine doesn’t work on her chrome skin, Jesse returns to the train to solve a final problem: MT remains trapped on board.

In the final showdown, MT’s Tulip-esque wit shows her she can get a number by reflecting Jesse’s, and the two exit the train hand-in-hand. She looks off into the distance at the mountains (often abbreviated Mt.) as the opening theme plays. She then stares at her own face reflected in the water, hesitates and re-introduces herself as “Lake,” finally free of the train and free to be more than just a reflection.

This ending delivers a striking message about the nature of personhood and humanity, encapsulated perfectly by one key conversation between Mace and Lake.

Mace tells Lake just before she kills him that “Being a reflection is all there is for you,” to which she replies, with tears in her eyes, “I don’t care what the train’s been doing or why. I know who I am, and Jesse didn’t want to leave me. We’re friends, and that’s real.”

Reality itself spat in Lake’s face, and she spat back.

While Lake’s ending does raise some interesting questions about how she might move forward from here (and where a potential Book 3 could take us), it was extremely gratifying – and tear-jerking – to see Lake and Jesse escape together after coming so close to being split apart permanently. Their journey on the infinity train was one of learned solidarity, and they arrived at the final station together.

It’s been said we’re living in a bona fide cartoon renaissance, and “Infinity Train” is just one of the many reasons this statement holds true. Check it out on Cartoon Network and log into Xfinity on Campus with your VUNetID for the full episodes for free.