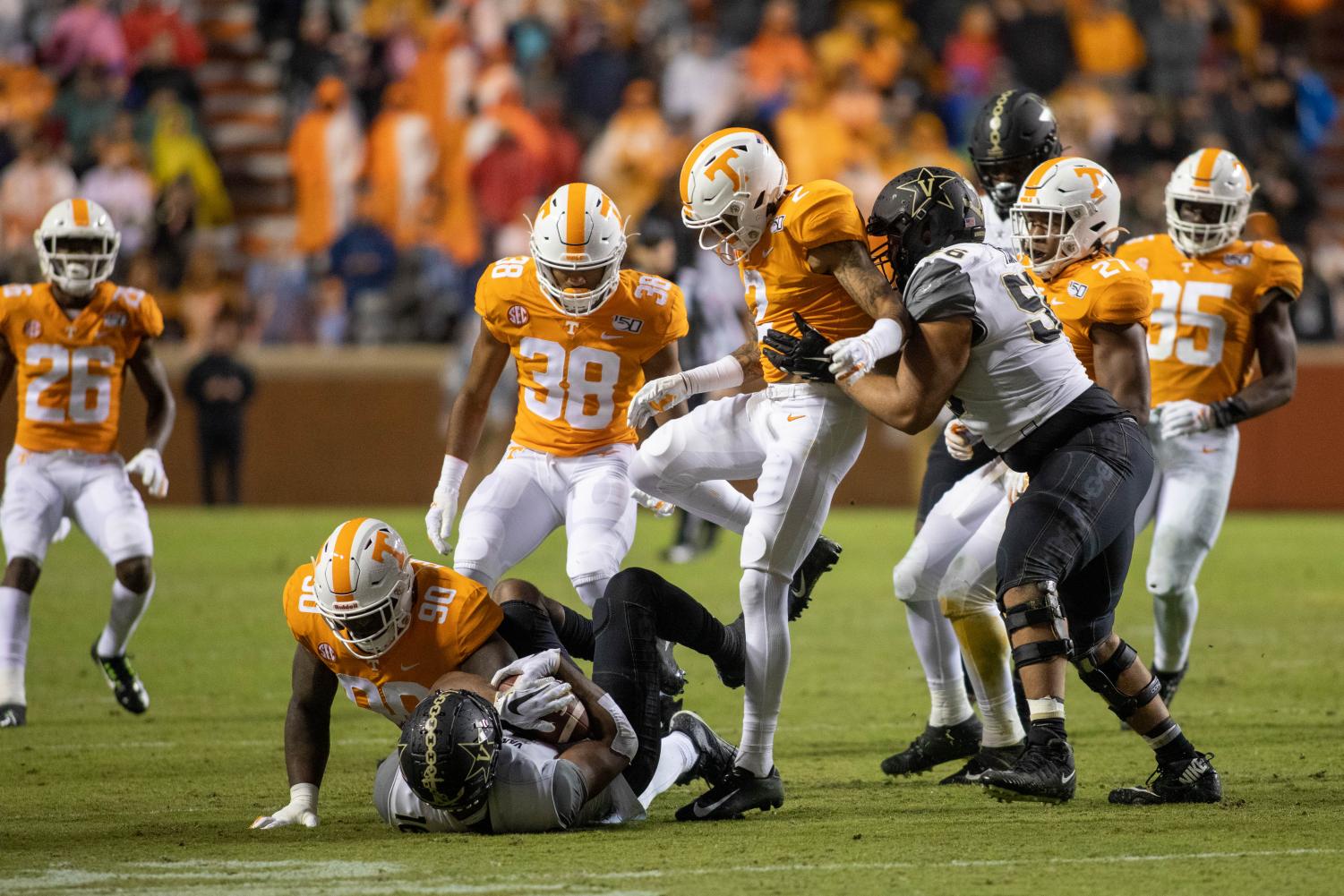 Kalija Lipscomb is brought down after a short gain in Vanderbilt’s 28-10 loss to Tennessee on Saturday. (Emily Gonçalves)

Kalija Lipscomb is brought down after a short gain in Vanderbilt’s 28-10 loss to Tennessee on Saturday.

A late Saturday afternoon loss to Tennessee brought the end of the 2019 season, and this was one to forget

One moment on the sidelines late in an already decided ballgame epitomized Vanderbilt’s season.

After Tennessee wide receiver Jauan Jennings knocked Vanderbilt punt returner Justice Shelton-Mosley out of bounds, he laid on top of him for a few seconds, got up and stomped on Shelton-Mosley’s head. Jennings’s cleat made direct impact with Shelton-Mosley’s exposed face.

It was dirty. It was malicious. It was also a microcosm of the last three months for Vanderbilt’s football program.

This is a team that was stomped on with regularity.

The Commodores’ season that mercifully came to an end on Saturday afternoon put the finishing touches on a 3-9 campaign, tied for the worst of the Derek Mason era. The 28-10 loss to in-state rival Tennessee was just the latest in a slew of blowouts for a Vanderbilt team that was never able to right the ship through a three-month gauntlet. This game was as torturous to watch as the rest of them.

There are quite a few times this season that Vanderbilt looked like it had reached its lowest point. A blowout loss to UNLV certainly makes its case, as does a 38-14 drubbing at home against a quarterback-less Kentucky team. The bottom line, though, is that on Saturday afternoon against Tennessee – a team Vanderbilt had beaten three years in a row – the game was a foregone conclusion.

The Volunteers didn’t play their best football, not by a long shot, and the fact that it was still more than enough to crush the Commodores is telling. These are two programs moving in vastly different directions, and if Vanderbilt doesn’t turn things around in 2020, this might just be the new normal.

Here is your Commodore Brunch menu for the final time this season:

That Seals the Deal

Vanderbilt’s quarterback carousel this season spun too fast to even keep track. If you’re counting, here’s the order:

From the very first quarter of Vanderbilt’s first game, it became readily apparent that quarterback was going to be a major issue. In the fourth quarter of Vanderbilt’s last game, things looked no better. Over the course of 12 games and three months, four quarterbacks took the field, and save for a couple flashes of competency from Mo Hasan in his three quarters of action before suffering a concussion, each week was as bad as the last. There was no stability, there was no growth and most importantly, there was no talent. Offensive Coordinator Gerry Gdowski made that quite clear with his play-calling throughout Saturday’s matchup.

On one particular series, after a holding call backed Vanderbilt up on first down, the Commodores ran the ball for four yards on 2nd and 20 before throwing a short screen pass on 3rd and 16. Gdowski essentially admitted that a holding penalty on first down ended the drive. He had so little confidence in Neal to put together two throws to collectively accumulate 20 yards that he didn’t bother letting him try. It was Week 12 of the College Football season, and the quarterback confidence was at an all-time low. 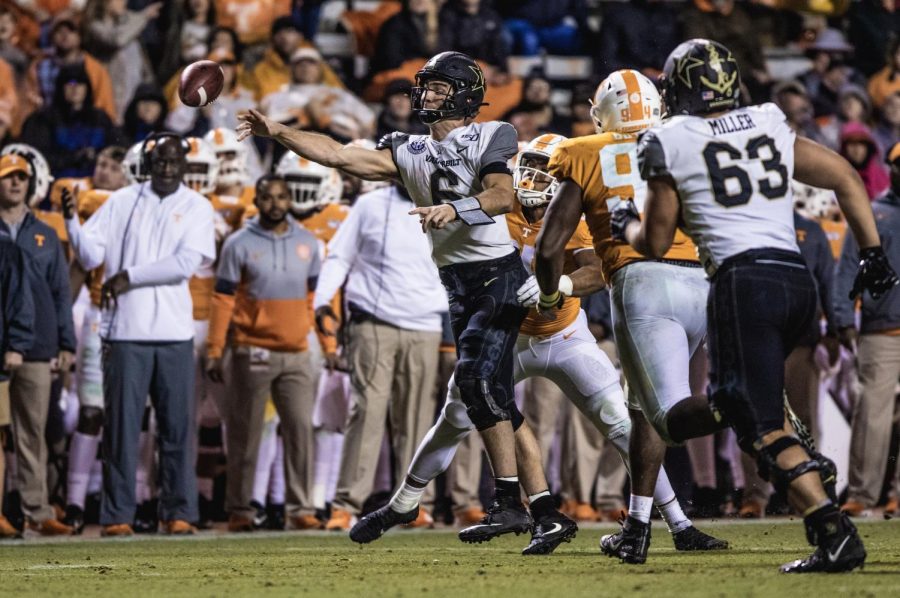 Gallery|3 Photos
Hunter Long
Riley Neal (6) completed 14 of 29 passes for 139 yards and a touchdown in his final collegiate game.

Neal is gone next season. That much is certain. Wallace, who has one more year of eligibility, can’t be the guy. His 5.3 QBR is by far the lowest of any quarterback in college football that played at least 100 snaps. He was likely the worst quarterback in the Power Five conferences this year. Hasan has had concussion problems throughout his career and hasn’t shown enough to be a viable starter going forward, and Walters looked unimpressive in his short stints under center. When you have three quarterbacks, you have no quarterbacks, and Vanderbilt is that saying personified.

Vanderbilt’s starting quarterback next season likely isn’t on the roster yet. The hopes of a fan base have never rested more on a high school quarterback who has yet to even step foot on campus. Ken Seals, the four-star recruit from Weatherford, Texas who is lighting up the Texas high school football scene, has a very good chance to be the starter from the minute he walks into camp. Mason’s future job security could hinge on his success. Gdowski’s almost definitely does. That’s a scary amount of pressure to be put on a freshman, but that’s where Vanderbilt sits right now.

Coming into Saturday’s showdown, Tennessee running back Eric Gray had just 207 rushing yards on the year. By the end of the afternoon, Gray had more than doubled that number. He finished the game with 246 yards on the ground – fifth most in Tennessee history – and two touchdowns. His 94-yard touchdown run was the longest by a freshman in SEC history. This all from a freshman who was a third-stringer for most of the year. 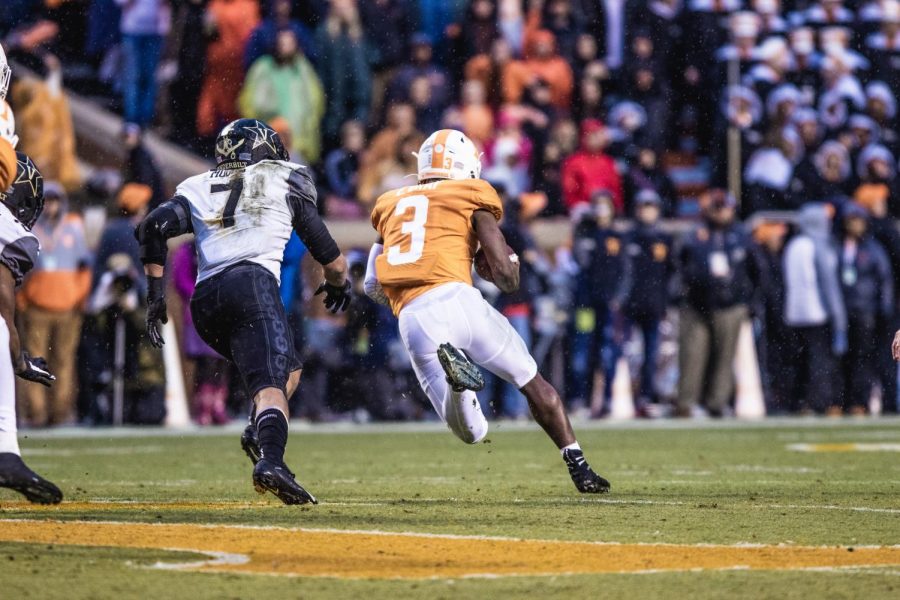 Players having career days on the ground against the Commodores is nothing new. It’s happened time and again this season. Vanderbilt gave up an average of 208.8 yards per game on the ground this season, fifth worst in the Power Five. Ole Miss ran for 413 thanks to an 84-yard score and a 78-yard score from freshmen Snoop Conner and Jerrion Ealy. Kentucky ran for 401 on the backs of Christopher Rodriguez Jr., Lynn Bowden Jr. and Kavosiey Smoke, all of whom accumulated at least 95 yards and a touchdown. Gray was just the latest in a long line of running backs finding success against a porous run defense.

Vanderbilt looked outmatched at the line of scrimmage again on Saturday and it showed. It wasn’t that Gray was breaking tackles displaying extraordinary speed. He had massive holes to run through and an offensive line that won constantly at the point of attack. The Volunteers started the game trying to force the ball through the air with quarterback Jarrett Guarantano, who began 0 for 7 with an interception, but once they focused on running the football to jumpstart the offense the game was effectively over. That’s how overmatched the Commodores were.

Vanderbilt’s season is over, which means today officially starts their focus toward 2020. Derek Mason will be back next year. Athletic Director Malcolm Turner made that much clear with his announcement a couple weeks ago, much to the chagrin of many Commodore fans in Nashville.

Mason seems to have been looking toward next season for a little while now, chalking this up as a down year in a series of “waves and cycles.”

On Saturday, the sixth-year head coach looked like he phoned it in, praying for a fresh start. After the game, he was quick to pivot and talk about next year.

“We will continue to look at the roster as we get back and go recruit and hit the offseason like the way we should,” Mason said. “We will improve this roster, make it better and then figure out what exactly is next for us because I feel like there is a lot there.”

There are few, if any positives to take away from this season from Derek Mason’s job, but Turner didn’t care what Mason did against Tennessee. The decision to keep him was intentionally made before this game to eschew discussion about his job security entering the offseason. For now, Mason is the guy, and the reality is this:

Mason coached this year with a bad offensive coordinator, arguably the worst quarterback room in college football, severe losses on the offensive line and a roster built with its best players at non-premium positions and its biggest holes at premium ones.

Next season, four of five linemen return. All 11 defensive starters have eligibility remaining. One or potentially two new quarterbacks will come into camp. Keyon Brooks, Ja’Veon Marlow, Cam Johnson, CJ Bolar and others have shown promise at the skill position spots. There’s a lot to fix and a lot to revitalize, but this was a young and inexperienced team that has more continuity heading into next season. Don’t expect 2020 to be as bad as this 2019.

If it is, Mason won’t keep getting free passes.

The Vanderbilt Hustler welcomes and encourages readers to engage with content and express opinions through the comment sections on our website and social media platforms. The Hustler reserves the right to remove comments that contain vulgarity, hate speech, personal attacks or that appear to be spam, commercial promotion or impersonation. The comment sections are moderated by our Editor-in-Chief, Rachael Perrotta, and our Social Media Director, Chloe Postlewaite. You can reach them at [email protected] and [email protected]
All The Vanderbilt Hustler picks Reader picks Sort: Newest
Subscribe
Login
4 Comments
Newest
Oldest Most Voted
Inline Feedbacks
View all comments
B
Bill Colvin

Class of ’73 here. Great article that touches on almost everything wrong with this past season, and where the football program is. It will be interesting to see how the recently announced coordinator changes work out.

SEC should sanction Jennings for the obviously intentional “clearing” of the face of a downed VANDERBILT player. No remorse shown or apology made by Jennings or Tennessee Staff! SEC Commissioner please do your job!

“Hold Fast me Hearties!” We’ve got an AD who is serious about supporting the program and a coach who really wants to be here.