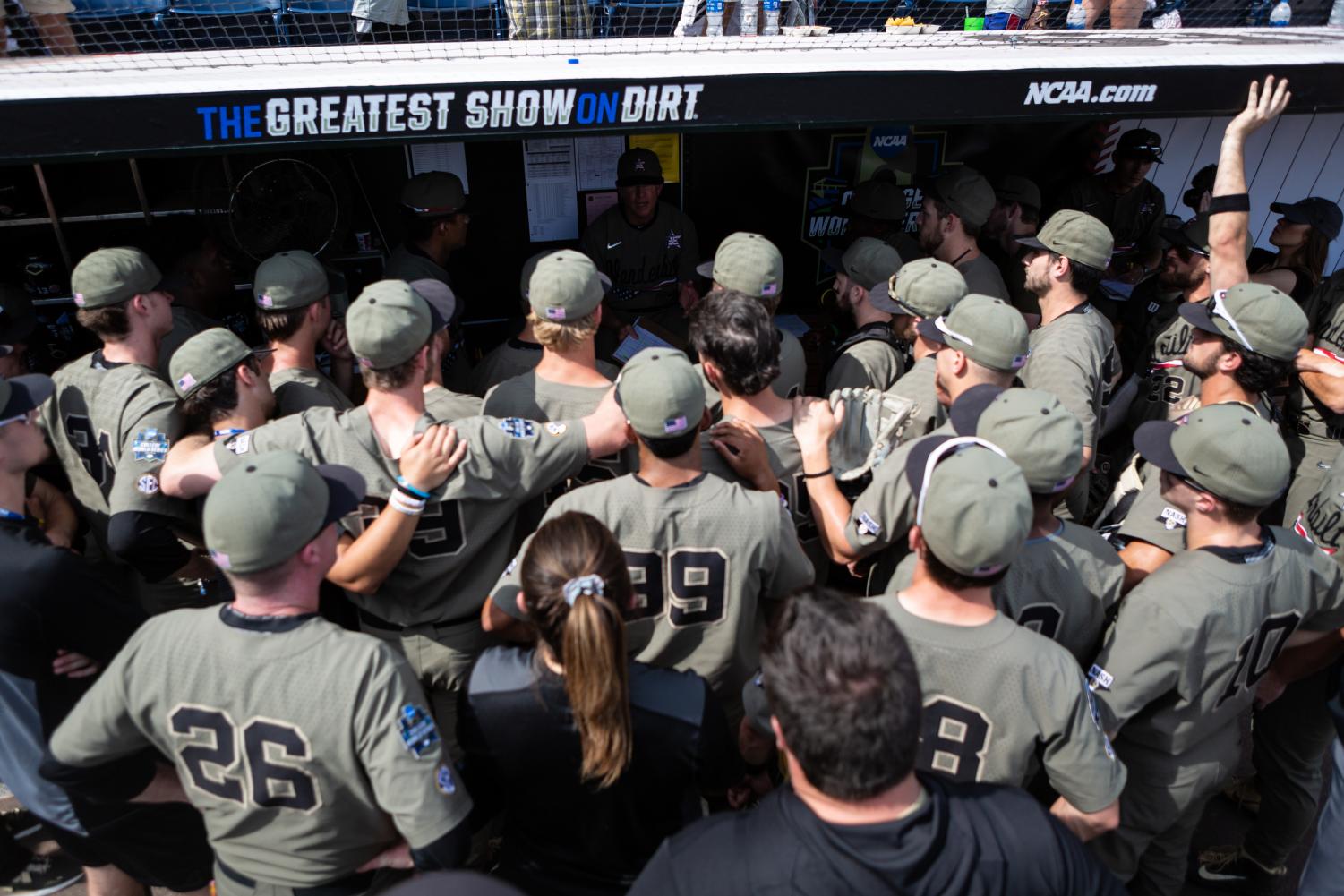 Vanderbilt huddles around head coach Tim Corbin after a victory over Louisville in the College World Series. (Photo by Hunter Long) (Hunter Long)

Vanderbilt huddles around head coach Tim Corbin after a victory over Louisville in the College World Series. (Photo by Hunter Long)

Vanderbilt baseball is still a long way away from kicking off, but on Thursday, head coach Tim Corbin provided an indication of what it’s going to look like come February.

The 2020 schedule features 27 games against NCAA Tournament teams from a year ago and five College World Series rematches.

Vanderbilt opens the season in Scottsdale, Arizona for the second annual MLB4 Collegiate Baseball Tournament. They’ll take on Cal Poly, UConn and College World Series runner-up Michigan Wolverines in an unannounced order on February 14-16. Vanderbilt is the only team to participate in the tournament in both years of its existence, having won two of its three games in Scottsdale a season ago.

The Commodores then travel home to Hawkins Field for an 11-game homestand that begins with a two-game slate against South Alabama on February 18-19 and concludes with a midweek matchup against Central Arkansas on March 3. In between, Vanderbilt will renew its series against Illinois-Chicago and open a new series against Hawaii for the first time since 1981.

From there, the Commodores fly out west to Dodgertown in California for the second consecutive season to take on UCLA, USC and TCU (March 6-8), the latest of which will take place at Dodger Stadium in Los Angeles.

The VandyBoys will get four days off before conference play gets underway at home against Kentucky (March 13-15) for a three-game set. Vanderbilt will alternate home and away series’ for almost the entirety of SEC play. After they host Kentucky, they travel to Tennessee (March 20-22), then back home to face Georgia (March 27-29) before heading to LSU (April 2-4) for the first time since 2016.

Following matchups include a home series against South Carolina (April 10-12) and a trip to Oxford to take on Ole Miss (April 17-19) in a rematch of last year’s eight-run comeback win in the SEC Championship game.

A three-game set at Hawkins Field against Alabama (April 24-26) and two road trips to Missouri (May 1-3) and Florida (May 7-9) lead the Commodores down the stretch of conference play before Vanderbilt’s final SEC series of the season: Mississippi State. Vanderbilt will take on its newfound rival on May 14-16 to end the season with a three-game home series. The Commodores avenged their NCAA 2018 Tournament defeat at the hands of the Bulldogs with a College World Series victory this past June.

Vanderbilt’s midweek games dispersed intermittently throughout conference play include trips to First Tennessee Park to face Belmont (March 17) and Lipscomb (March 24), an NCAA Regional rematch against Indiana State (April 14) and a College World Series Semifinal rematch against right-handed pitcher Luke Smith and the Louisville Cardinals (May 5) in the annual Battle of the Barrel showdown.

Vanderbilt’s difficult 56-game schedule includes games versus opponents that produced a combined 123 MLB Draft selections and posted a combined 1025-795-3 record in 2019, according to Vanderbilt Athletics.

The new-look Commodores will also take on Oklahoma State this Saturday in Kansas City for the team’s first exhibition game of the fall. First pitch is at 12:00 pm CT.