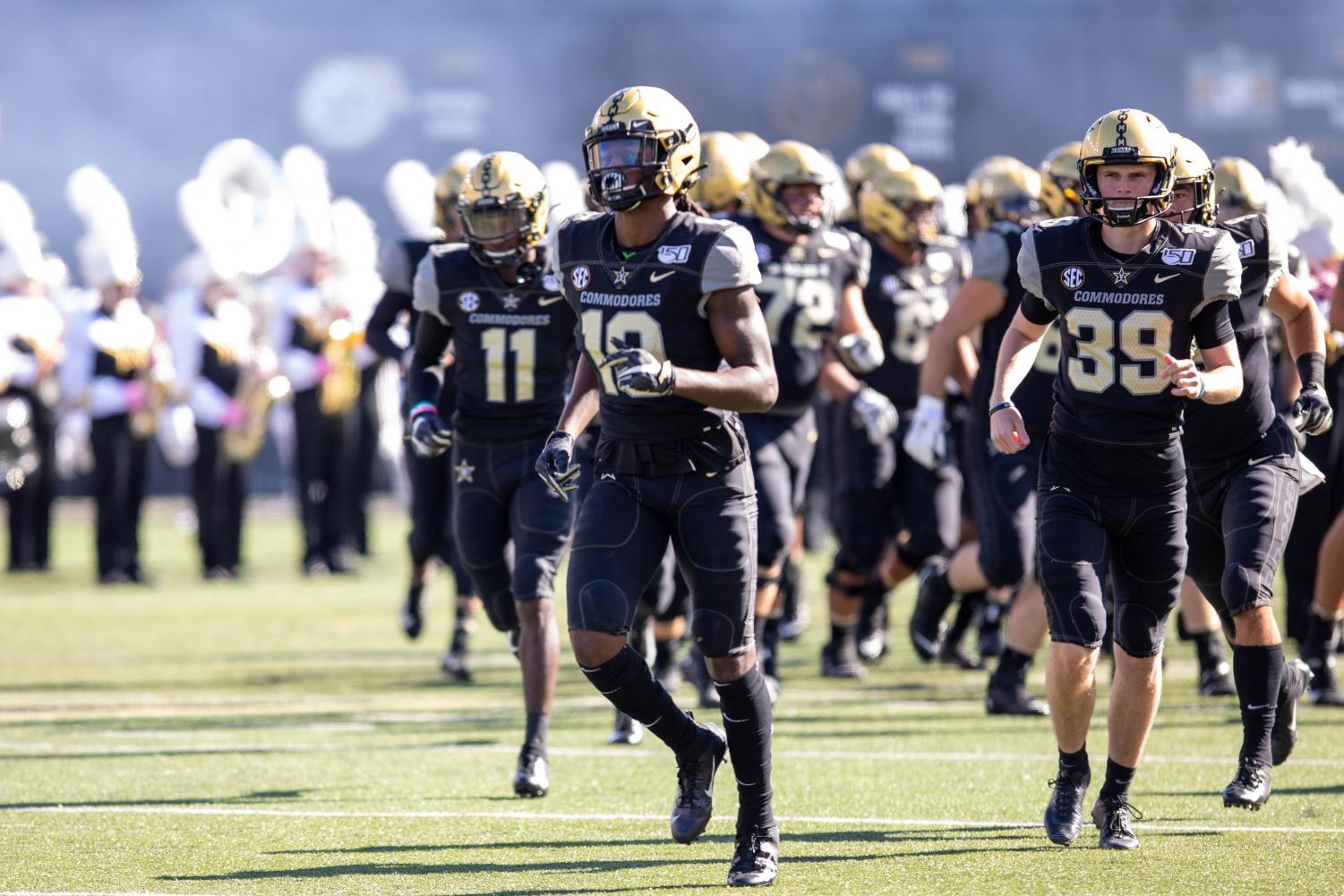 This game was not one that most Vanderbilt fans were worried about when they saw this season’s calendar. This game was supposed to be a relative cakewalk compared to a brutal SEC slate. This game hurt.

Vanderbilt looked lost in Saturday’s 34-10 loss to UNLV. The offense couldn’t muster anything after an opening touchdown drive, and injuries knocked out wide receiver Kalija Lipscomb and running back Ke’Shawn Vaughn for portions of the game.

But the same issues keep coming up with this team. The quarterback battle still appears to be going on, as a result of neither guy being particularly impressive in any of his appearances. Tight end Jared Pinkney is barely involved in the passing game. The secondary is missing tackles left and right. Vanderbilt never truly looks prepared in any of its games.

Punter Harrison Smith may be one of the team’s lone bright spots.

This week’s Commodore Brunch menu is pretty meaty, so get ready. 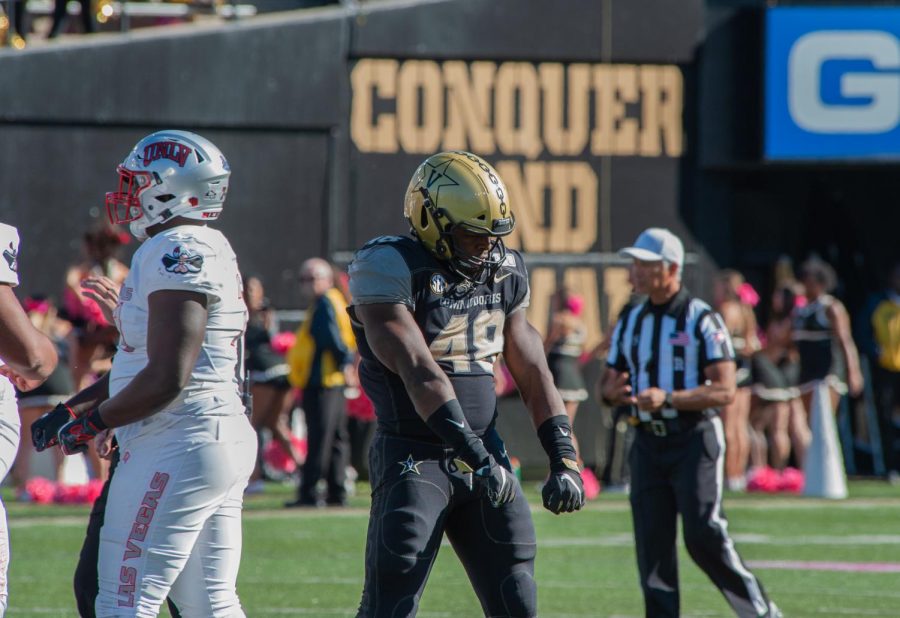 Asleep at the wheel

As the old saying goes, “If you have two quarterbacks, you have none.” Nothing better sums up Vanderbilt’s season than that statement.

Quarterback Riley Neal made his sixth straight start of the season against UNLV. It wasn’t a good one. Neal was inaccurate on the medium and deep balls, but he made enough of his short passes to keep UNLV honest on the first drive. Running back Ke’Shawn Vaughn was the star of the opening touchdown drive. Vaughn caught a short pass from Neal over the middle and slipped through defenders to stretch the play into a 53-yard gain. That would be the only touchdown of the day and Neal’s only bright spot.

Redshirt junior quarterback Deuce Wallace relieved Neal in the beginning of the second quarter. Wallace was mostly tasked with handing the ball off to Vaughn on his first drive of the day. Vaughn ran for all 47 yards in that drive that ended with a missed 46-yard field goal by kicker Ryley Guay.

On the following drive, Wallace took a few deep shots but missed wide receiver James Bostic twice in four plays in nearly the same spot on the right hash mark. Both misses were overthrows that didn’t have much of a chance of being caught.

Wallace was replaced by Neal with 3:39 left in the second quarter. Neal missed wide receiver Cam Johnson, who was open on the right sideline and nearly had his pass intercepted. On the next play, Neal completely missed tight end Jared Pinkney — which is starting to become a theme this season.

The inaccuracies on deep throws allowed UNLV’s defense to load to box, which helped them stop Vaughn and stall Vanderbilt’s offense.

Neal started the second half because at least he completed more than one pass. But he threw an interception right to UNLV defensive back Javin White out of the break, and on the next possession, he fumbled the ball on a strip sack.

Neal trotted out for one more series, and he did not fare much better. Vanderbilt turned it over on downs after gaining just six yards in four plays.

Wallace relieved Neal again, but it was more of the same with overthrows to receivers. Wallace did have a nice 16-yard completion to Bostic, though.

Head coach Derek Mason needs to decide on a quarterback. He even cited Neal’s greater arm strength as a reason he was named the starter over Wallace, who has spent more time in Vanderbilt’s offense as a redshirt junior. But, six weeks into the season, he cannot be rotating quarterbacks like this. It throws off timing and rhythm with the rest of the offense.

As we get closer to Halloween, the defense is increasingly becoming haunted by the ghosts of explosive plays past. 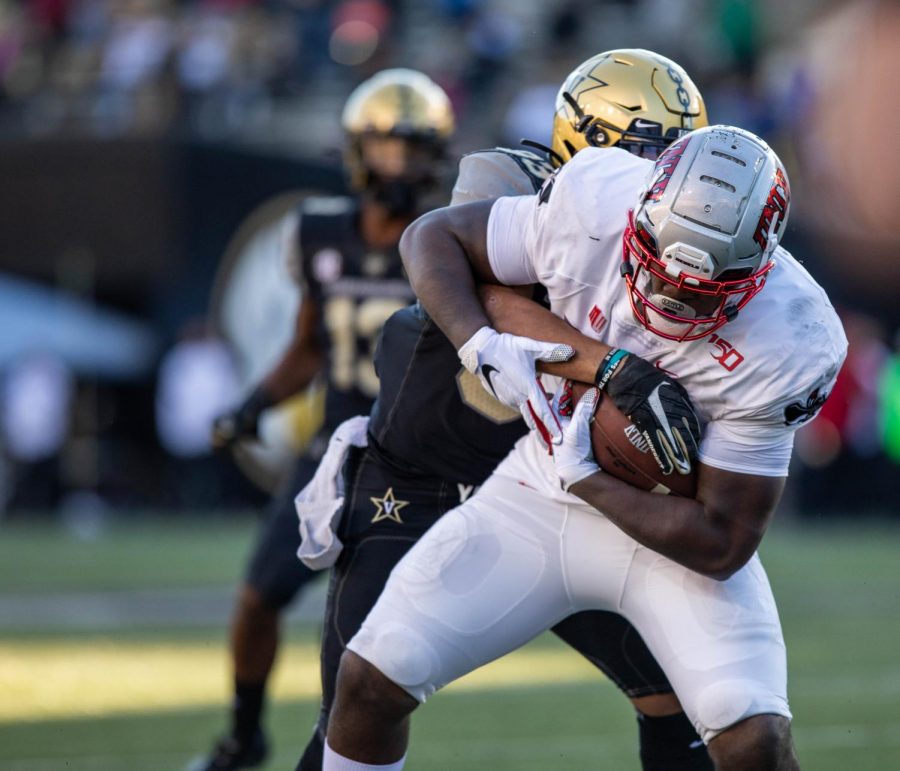 Coming into the game, Vanderbilt ranked last out of 130 FBS teams in yards per play allowed. Vanderbilt’s defense allowed opponents to move the ball an average of 7.58 yards each play, and the explosive plays Vanderbilt has allowed have only worsened that figure.

A blown coverage in the secondary led to a UNLV touchdown in the second quarter. UNLV quarterback Kenyon Oblad found wide receiver Randal Grimes wide open on the right side of the field for a 63-yard touchdown, and no Vanderbilt defensive back was within 10 yards of Grimes. The play put UNLV up 17-7, and was the source of a shift in momentum towards the Rebels.

The defense allowed multiple big runs by running back Chad Maygar, including a touchdown run during which he was dragging defenders behind him. Missed tackles are a major cause of these explosive plays, and getting that under control has been a priority for Mason all season.

It’s one thing to allow these types of explosive plays to teams like Georgia and LSU, who are in a class of their own at the top of the SEC, but allowing big plays to UNLV is just unacceptable. These big plays are a major reason why Vanderbilt is 1-5 this season, and this game had plenty of them.

If Vanderbilt loses, but no one is there to see it, did it really happen?

The half-empty stadium may be part of a trend of dwindling fan interest that has been happening all season and may continue now that Vanderbilt is on a two-game losing streak. When Vanderbilt hosted LSU and Georgia, opposing fans traveled in droves to fill the stadium. Even though Vanderbilt fans were vastly outnumbered, their low attendance was at least masked by the away teams’ huge turnout. However, against Northern Illinois and UNLV, when away teams’ fans showed up in far lower numbers, it was easier to see the embarrassingly low attendance of Commodore fans.

Not only was home team attendance low, but it’s decreasing. Against Northern Illinois, the announced attendance was 24,519, about 21% higher than Saturday’s attendance against UNLV.

So why was the attendance over 4,000 people higher against Northern Illinois than it was against UNLV? Is this a sign of what’s to come now that the team is 1-5 with little hope for a win in the next few weeks of its schedule?

A half-empty stadium is never a good look, even against a non-conference foe. It’s an especially bad look when the few fans that are there don’t include students; from the press box, the student section looked exceptionally bare. Students have issues with their ticket downloads, and it is a major exam week next week, but even still, a 1-5 team doesn’t get better without support.

Next week, the Commodores look to bounce back against Missouri on homecoming weekend at 3:00 pm. A half-full stadium won’t cut it again.

The Vanderbilt Hustler welcomes and encourages readers to engage with content and express opinions through the comment sections on our website and social media platforms. The Hustler reserves the right to remove comments that contain vulgarity, hate speech, personal attacks or that appear to be spam, commercial promotion or impersonation. The comment sections are moderated by our Editor-in-Chief, Rachael Perrotta, and our Social Media Director, Chloe Postlewaite. You can reach them at [email protected] and [email protected]
All The Vanderbilt Hustler picks Reader picks Sort: Newest
Subscribe
Login
3 Comments
Newest
Oldest Most Voted
Inline Feedbacks
View all comments
B
Bob Rredd

This team looks like the teams of 15 years ago. They couldn’t beat the school for the blind. I just wounder if Turner the AD will be as quick to fire Mason as he was at firing Brice Drew

I absolutely love Derek Mason. He’s the kind of man and coach I’d like my sons to play for someday. The University has never seriously supported the football program. It’s seen as contrary to the high-brow academic image of the “Harvard of the South”. I went there (VULS ‘03). And I love Vandy, even though I live in the heart of Vol country just outside of Knoxville. But, even I know you can’t screw over your own football program with decades of neglect and then complain about the product on the field. The Stadium is a perfect example. The University should be deeply and horribly ashamed of its condition. It doesn’t need to be any bigger or somewhere else. It needs to be the absolute best of everything, the Cadillac of football experiences, for 40,000 of the the world’s most sophisticated alumni and fans.

The VU grad and 50-year football fan really can’t fathom how big of a farce this has become. Even in other bad years, attendance was never this bad. And to think there was talk to move home games to a ‘bigger’ venue. I guess visiting fans needed more hotel rooms and easier access.