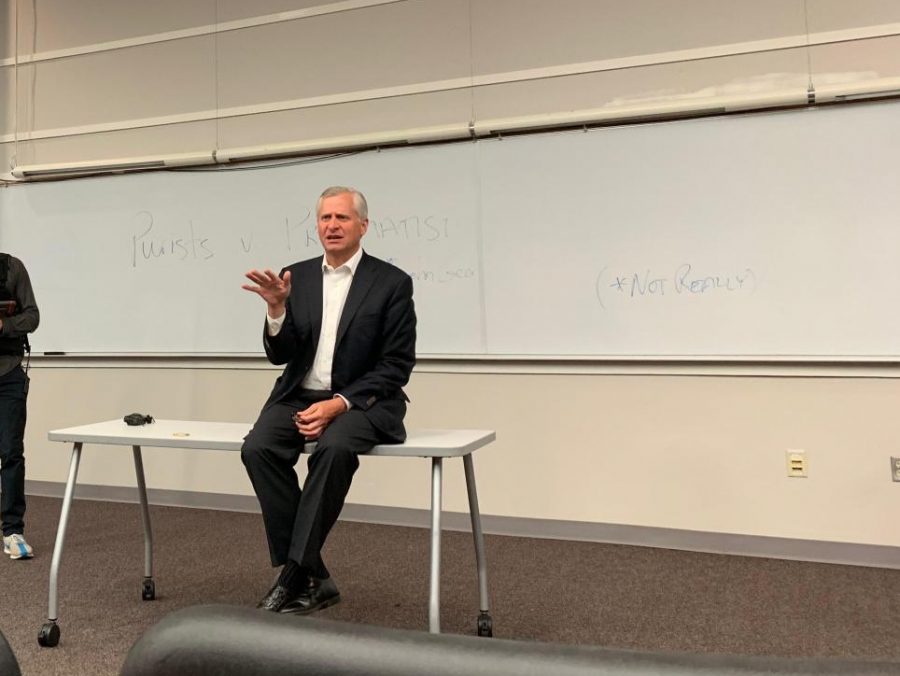 Professor Jon Meacham lectures in the “Leadership” class he co-teaches.

Students in the class “Leadership” will have the chance to be featured in a documentary about political science professor Jon Meacham’s most recent book, “The Soul of America: The Battle for our Better Angels.” A Kunhardt Film crew filmed the class Sept. 5 for the upcoming documentary, which is scheduled to be released Spring 2020.

Meacham is a renowned authority on American politics, a Pulitzer Prize Winner and a New York Times best-selling author who frequently occurs as a pundit on popular networks such as MSNBC. Meacham is co-teaching “Leadership,” formerly “Presidential Leadership,” this semester with Dean of the College of Arts and Science John Geer and former Tennessee Governor Bill Haslam, who is new to the Vanderbilt faculty this year.

“Soul of America” was written to make sense of Trump’s presidency and what it has brought America. As a conservative, Meacham has been vocal about his criticisms of Trump both in and out of class.

“I wrote this book to make an argument about how I think history can create a sense of proportion and give us some guidance through the maelstrom of the present,” Meacham said. “If a film can promulgate that message, I’m all for it.”

Kunhardt Films is a production company that focuses on creating documentaries about ideas and people that have impacted American history. Two of their most recently completed films include “True Justice: Bryan Stevenson’s Fight For Equality,” which HBO released in 2019, and the IDA winning “John McCain: For Whom The Bell Tolls,” which HBO released in 2018. The Kunhardt crew has been following Meacham the past few months to film for the project.

Students had the opportunity to engage in the filming process to the extent they were comfortable with it. A handful of students chose to sit in a “safe” section where they would not be filmed while the majority opted to sit where they had the chance to ask questions that could possibly be featured in the documentary. Junior Barton Christmas, who is enrolled in the class, appreciated the behind-the-scenes exposure shooting the documentary in the classroom could potentially give the audience.

“I think it’s good for us to demystify a class that not everyone gets access to,” Christmas said. “For example, when Bush and Biden came to Vanderbilt, they both visited individual classes before they went on to give their main speech, and I think as much as we can get those little behind the scenes looks into what these important figures are thinking, I think that’s incredibly valuable.”

“To be in this kind of class with someone that I’ve read about and seen on TV, it’s just kind of surreal,” Grogan said.

The documentary is projected to be released this spring, and the title and distribution company are still unknown. Director Katie Davison’s page on Kunhardt Films’ website says she joined “the Kunhardt team for an upcoming documentary for HBO.”

Davison’s personal website says, “My current projects include a book about trying to change the world and meeting your own limitations in the process and a new documentary with Kunhardt Films and HBO.”