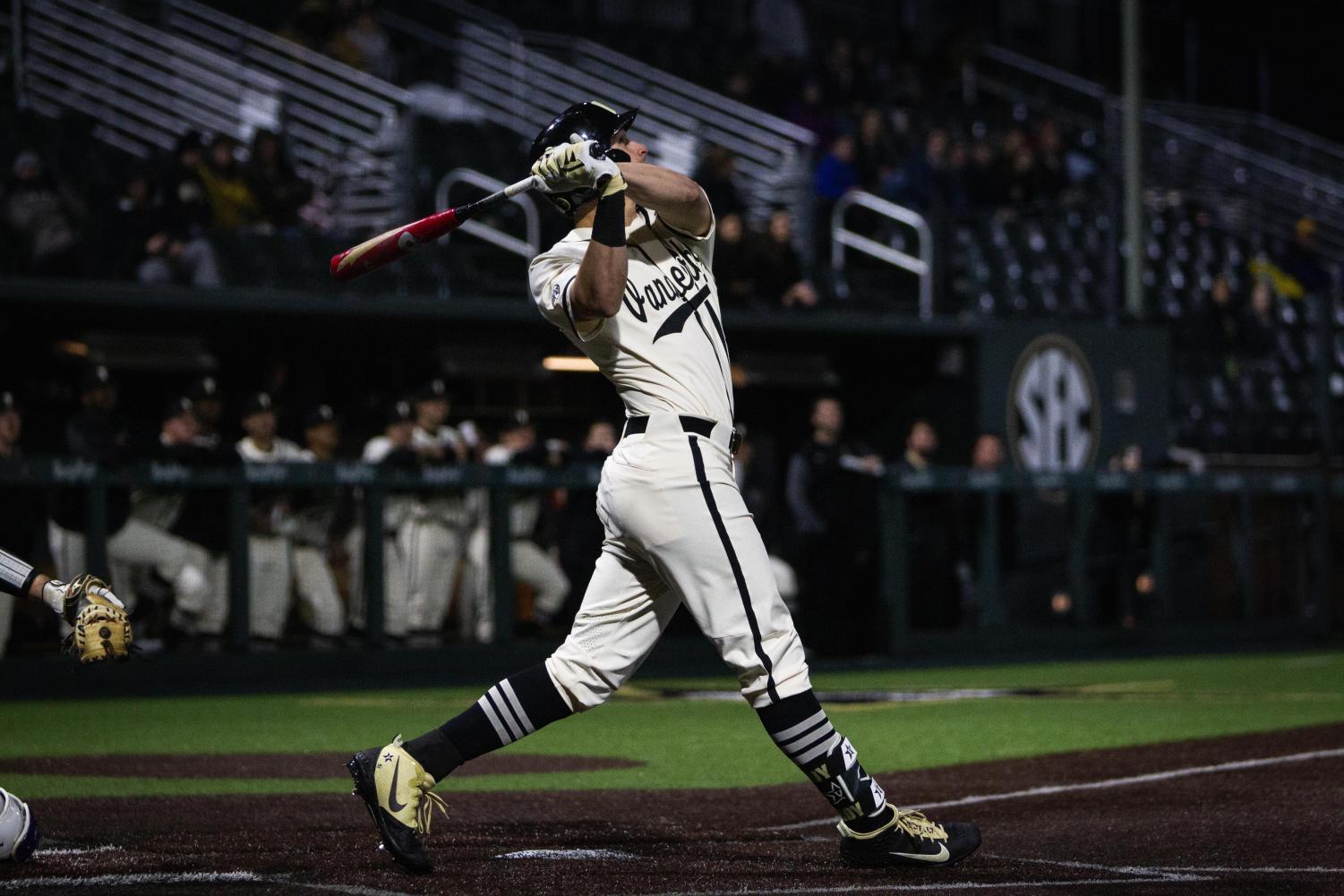 To quote one of the game’s greatest, Yogi Berra, “baseball is 90% mental.”

Now amidst his junior season at Vanderbilt, right fielder JJ Bleday has always had a firm grasp of the mental side. He’s not one to feel pressure in any particular situation. He never worries about how dominant the opposing pitcher may be. In fact, he hardly even worries about the score when he steps up to bat.

“I really try my best not to look at the scoreboard at all when I get up to the plate,” said Bleday. “I just feel like that’s just bad juju, and you start playing badly when you look at numbers, so I try to avoid doing that.”

As Berra famously concluded, “the other half is physical.”

In that respect, he certainly looks the part.

“Ever since we started recruiting him, we’ve liked his skillset,” said head coach Tim Corbin. “He looked like a good hitter for a high schooler, but what really intrigued us is that in addition to the hitting, he could help us a little bit on the mound too. You may see glimpses of this today, but back then? Oh boy did he throw well.”

In the most literal sense of the word, Bleday was far from physically challenged. When the 6’3″, 205 pound left-hander first arrived on West End, he still looked like the physical specimen we see today. His massive frame has hardly changed; however, having been recruited in part for his pitching, Bleday’s big, physical frame didn’t show up in his power numbers.

The potential was there: 22 RBI’s is certainly impressive for just a freshman, but his .256 average and mere two home runs revealed there was room for improvement. This was never a concern for Corbin’s staff. They expected Bleday to need some offseason work. After all, he was a utility man by trade. Bleday was once a pitcher and an outfielder.

Illogical as they may be, there is some truth in these Yogi-isms. Berra once lamented, “in baseball, you don’t know nothin’.”

And in fact, Berra was right.

But on Sunday afternoon, Bleday sent yet another ball into the stands with ease. That home run would etch his name into Commodore record books, as it broke Pedro Alvarez’s school record for home runs in a single season. Sometimes, these things just happen with time.

“I mean now, my swing comes a lot more naturally,” said Bleday. “It’s different because now, I’m not trying to do a lot. It just sort of happens on its own. I got more comfortable in the box and when I get some good pitches to hit, I don’t have to force much. I never swing with intentions of hitting a home run, but nowadays, that happens sometimes.”

This modesty simply doesn’t do his record justice.

When Bleday said “sometimes,” he meant 23 times. Those 23 home runs equal just about four times as many as his freshman and sophomore years combined. He reached this astronomical tally with eight games remaining in the regular season. In other words, if the Commodores make a late postseason run, Bleday could have nearly twenty more games to continue building on his historic season.

With the rate at which the home run hitting “happens on its own,” fans have come to expect a home run from Bleday quite often. Statistically, it happens one in every eight at-bats. Nearly three years have passed since the utility man was brought to Nashville, but he’s never pitched an inning.

“Well, you know, obviously the whole hitting thing has superseded the pitching,” said Corbin. “Pitching hasn’t been a part of his situation. He now serves the role of outfielder and hitter in our program. One of the best out there too.” 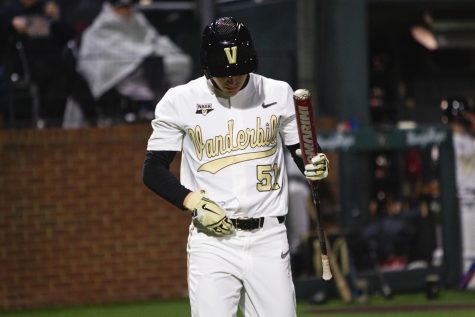 Bleday’s journey to the top, however, was far from a crystal stair. This process involved hard work, dedication, and above all, grit. According to Bleday, this very attitude allowed him to push through some disappointing moments. That makes it one of his most valuable assets.

“I think my positive energy has been the biggest part, and it’ll come in handy at the next level,” said Bleday. “I come to the park everyday with consistency. I do the same things day-in and day-out, whether I go 6-6 with six home runs or 0-6 with six strikeouts. It’s a game of failure, and what defines you is really how you handle those moments. The positive energy sets me apart and I’m always going to be there for my teammates and put them in a position to win the game on the field.”

His positive energy has done far more than help him hone-in on his skills at the dish. It helped him improve, thus positioning him to turn heads with his sophomore campaign. He began the 2018 season by posting a team-high batting average and notching three home runs in twenty games played.

But as Bleday acknowledged, success in baseball comes from how you define those moments of failure.

His hot-streak was cut short by a severe oblique injury. It caused him to miss 22 games, nearly two months of the entire season.

“It was extremely tough, I’m not going to lie,” said Bleday. “It was just a freak accident. It was right before our Florida series and I was so bummed out. My family was coming to watch, and I was looking forward to playing in front of them and all my friends from high school for months. But I knew I’d be back. It took a lot of time and a lot of patience. I rehabbed for longer than I wanted to. Longer than any player would want to. But I made sure that when I came back, I was playing my best ball and putting my teammates in a position to win games.” 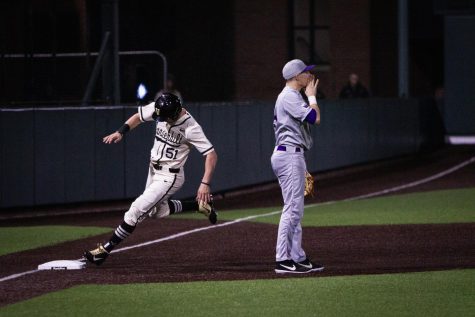 Slowly but surely, Bleday worked his way back into the lineup. He didn’t make his much-needed return until there was less than a month before postseason play.

“He just needed time,” said Corbin. “He was hurt the whole damn year last year. He hardly played so I didn’t know who the hell he was. He started off okay, but then he was gone for seven weeks. Just like that. Poof. His hot start meant nothing since we didn’t have him for most of the season. That said, he’s a fighter. He worked his way back and at the end of the year, I think you finally got to see him tap into his abilities a little bit more.”

Bleday came back with a vengeance the Commodores desperately needed.

In the remaining month of the season, Bleday set the tone for his junior campaign. Whether reaching base four times in his first game back, setting a Commodore record with five walks in one game, or hitting a walk-off home run in the NCAA Super Regionals, Bleday began to show maturity through his versatile approach at the plate.

Now, Bleday continues to impress. His 23 home runs speaks volumes when coupled with his .352 batting average. This performance has garnered national attention. It’s propelled him into conversations that would etch his name into College Baseball history once again.

If he keeps up his remarkable performance, Bleday could very well join an exclusive club. One in which David Price — Cy Young Award Winner, five time All-Star, and World Series Champion — currently sits as the lone member: the Vanderbilt Golden Spikes Club.

The Golden Spikes award is given annually to the best player in College Baseball. Price is the only Vanderbilt product to have received such high honors — for now.

Bleday is on the shortlist for the 2019 award, as is his teammate Austin Martin, but he declined to comment on the potential award-winning campaign. As Corbin acknowledged, his performance can do all the talking.

“Who cares about Golden Spikes. His game speaks for himself,” Corbin said. “And you know what? If he’s fortunate enough to be apart of that, that’s great. I’m glad. But that’s the last thing I would want to comment on… All I care about and all he cares about is helping this team. Oh and also we both care about his exam today, I hope he does well on that.”

Ultimately, Bleday is a competitor. He pays little attention to what position he plays, where he’s slotted into the lineup, or what his stats might be. What matters to Bleday is putting the Commodores in position to win ballgames.

Since classes ended in late April, he’s done just that. The Commodores have played, and won, eight games in that time. Their offense has tallied an astronomical 90 runs, including two straight 20+ run performances, despite two shortened, seven inning games in a doubleheader.

At this rate, JJ Bleday is likely playing his final season for the Commodores, but his impact will outlive his three years. He’s put together quite the résumé for any college athlete, but one goal remains incomplete: winning a national title. However, if Bleday continues to play at such a high level, he could very well help his team reach that goal.

That very team-first mentality is what Coach Corbin will miss the most.

“Everything he does is deliberate. He’s an old man at heart,” said Corbin. “It’s just like coaching your dad. He’s shit out of luck for being in a 21 year old’s body… He’s not a pain in the ass, he’s always where he’s supposed to be and says the right thing. He’s accountable, he doesn’t screw up, he just is a real good kid. You just wish you had a bunch of guys like that. He’s just been a fun kid to coach… He’s one of those guys where you realize you might only have three years with him which sucks, but at the same time you’re glad you had the opportunity to spend three years with him, you know? Maybe I’ll thank his parents at some point.”

The Vanderbilt Hustler welcomes and encourages readers to engage with content and express opinions through the comment sections on our website and social media platforms. The Hustler reserves the right to remove comments that contain vulgarity, hate speech, personal attacks or that appear to be spam, commercial promotion or impersonation. The comment sections are moderated by our Editor-in-Chief, Rachael Perrotta, and our Social Media Director, Chloe Postlewaite. You can reach them at [email protected] and [email protected]
All The Vanderbilt Hustler picks Reader picks Sort: Newest
Subscribe
Login
1 Comment
Newest
Oldest Most Voted
Inline Feedbacks
View all comments
P
Patricia Fitzpatrick

I am JJ’s Aunt Patricia, and I know him all his life. What you see is what you get. JJ is the nicest kid I know. He always responds to my mails graciously, and he has lots of family pride especially seen in his interest in his heritage (learning Russian). I’d like to JJ go as far as he can. He would add style to any ball team as well as win games.