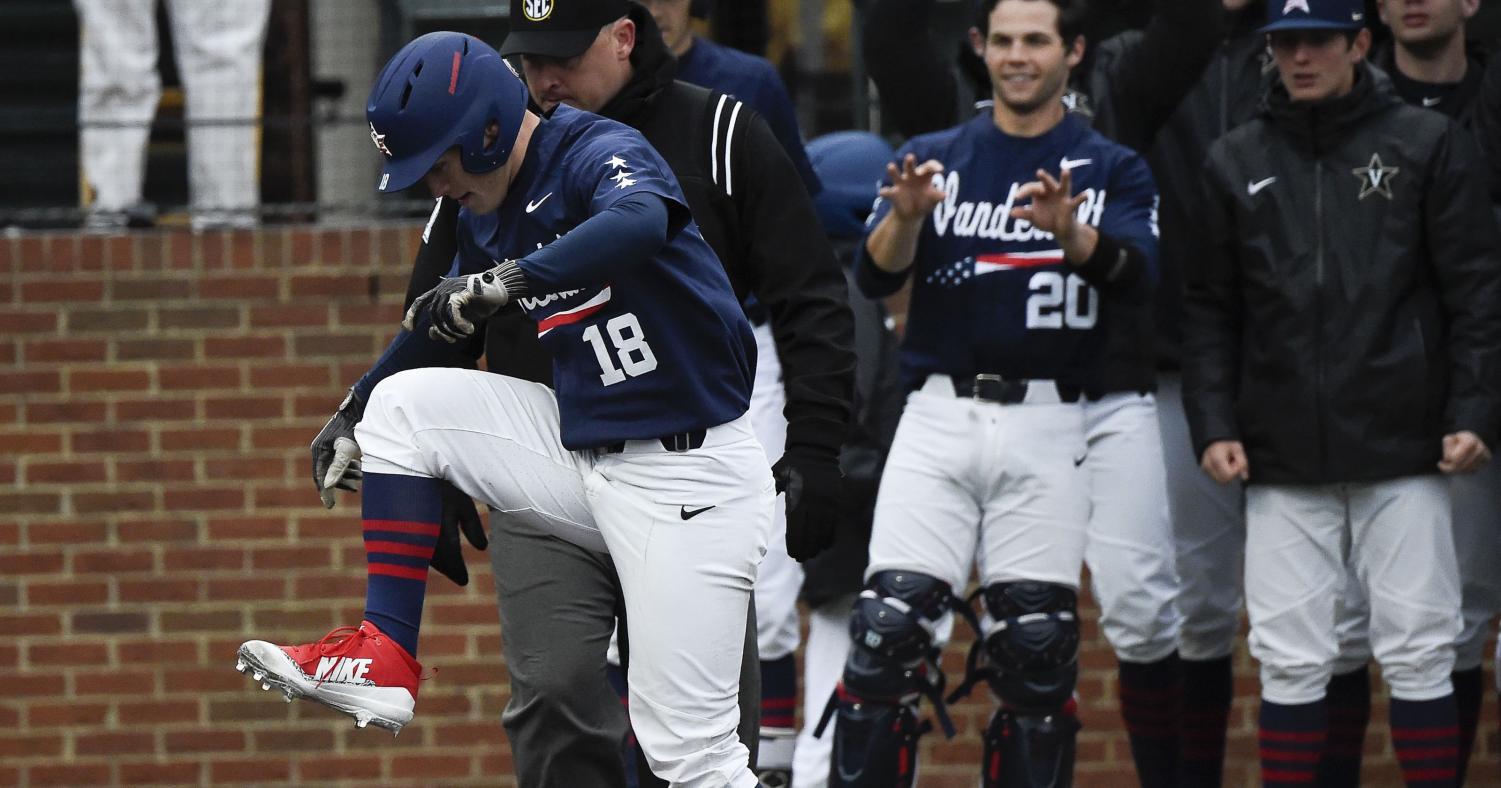 For years, the Commodores have abided by one unwritten rule: if you hit a home run, don't forget to stomp on home plate. This year, they've stomped a whole lot--and are on pace to set a record.

Baseball is ridden with unwritten rules, rituals, and routines that bring about a bizarre code of conduct. To the outsider, these customs may seem idiosyncratic, but players, coaches and fans alike are obsessed with observing these odd conventions.

If you know baseball, you know exactly what I’m referring to.

For example, when a player walks off the field, he must never, under any circumstances, step on the easily repairable line of chalk; for this sacred symbol constitutes the foul line. If, heaven forbid, this straight line is ever so slightly smudged, the unthinkable ensues: constraints on the field of play become moderately vague.

Or consider a scenario in which a fan is rooting for a team that trails by three runs in the bottom of the ninth inning. Obviously that fan must do his due diligence to help his team. Whether comfortably seated a mere ten feet behind home plate, or suspended hundreds of feet above in the mezzanine, the fan should turn his cap inside-out (a “rally cap”) to catalyze offensive performance.

There are even rules that take “unwritten” to the next level: the unspoken rules. These situations may arise when a particular column on the scoreboard remains at zero; these situations happen when the man on the mound is chasing perfection; these situations are so sacred that it should not even be spelled out.

But everyone knows that.

Frankly, no one quite understands the origins of these quirks, superstitions, and traditions. However, they become so deeply entrenched in the history of a team, program or franchise that violating the patterns is seen as a sin.

Clearly, each action has no effect on the resulting performance. However, if the action happens to precede success, regardless of how coincidental it may be, the pointless deed transcends to a powerful decree.

Like stroking the artificial fur of a stuffed animal llama for good luck.

Or whistling because, well, that’s also supposed to bring about good luck. It also does a heck of a job frustrating the opposing fanbase.

Clearly, Vanderbilt baseball does not take their superstitious traditions lightly. Deeply engrained in the team’s history is one tradition that has superseded the rest.

The crack of Vanderbilt bat launching a home run is deafening, but it’s never the most emphatic part of the play. The exclamation point comes when the player rounds third base. It’s a right of passage that has been practiced for many years.

It’s a right of passage that has been practiced a whopping 65 times this season.

When a player finally arrives home, he must do his part to ensure the tradition stays in tact. He lifts his leg off the ground–so high that it may look like he’s squashing a human-sized insect–and stomps on home plate. The dirt that had been covering the plate sprinkles into the air, and the player is congratulated by his teammates.

“I’m not really sure why we do it,” said Commodore slugger JJ Bleday.

The home run stomp is perhaps the most prominent of their bizarre traditions.

Because in the Music City, the Commodores do things differently.

“With home runs, other teams usually hug the guy, or head butt each other, touch helmets, whatever their thing is,” said JJ Bleday, who leads the team in stomps. “That’s all the same to me. But we are not the same to me. We’re different. We do it just because it makes us different, and that’s what we do at this program. We do our own thing, and we don’t model our game off of anyone else. And you know what? It’s working.”

The Tradition of the Stomp

The home run stomp has been on display for many years, yet it’s practiced at such a frequent rate that fans have hardly given it much notice. In fact, the fans, players and credentialed media can hardly remember when, why or how it came to fruition.

“Not really sure why we do it,” said Bleday. “It started and it caught on, so we keep doing it. Corbs teaches us that at the beginning of the year as soon as you’re a freshman here. You learn the standards here, and that’s one of them.”

While it’s unclear exactly how long they’ve stomped on the plate, one thing is for sure: it’s not a newfound tradition.

Let’s rewind the clocks to May 6th, 2008–a whopping 11 seasons ago. The Vanderbilt Commodores were facing the Memphis Tigers in Pringles Park. This heated in-state rivalry was hardly on the Commodores’ radar because they knew the Tigers shouldn’t pose much of a challenge.

He launched one of the most legendary home runs of his Vanderbilt career. A moonshot that Vanderbilt Athletics estimated to have traveled roughly 430 feet.

Even after the home run, he didn’t need to say anything to the fans. There was no “I told you so.”

There was just an energetic, emphatic stomp on home plate.

So the tradition may have a rather ambiguous origin, but we know it’s been going on for at least 11 seasons–well over half of the 16 years in which Corbin has held the crown as head coach.

A decade and some change later, Ty Duvall and the veteran ballplayers are still teaching freshmen like Isaiah Thomas how to perfect the tradition.

When asked why they participate in such a quirky tradition, Bleday gave a rather uninformed, but well-educated guess.

“Well, I assume we stomp on the plate for three reasons. One of them is just to get through and to make sure you’re not just slowing down in case there’s an out on one of the bases that can potentially ruin a run. The second reason is to state your dominance. Lastly, we want everyone to know we’re different. Because, as you know, we are different. Corbs teaches us that at the beginning of the year as soon as you’re a freshman here. You learn the standards here, and that’s one of them.”

It must be a Coach Corbin thing.

But even Corbin, when asked to recall the history of the tradition, shrugged it off and made it seem like the meaningless routine it is.

“Well, it’s just become a little bit of a tradition. That’s all,” Corbin said. “We always try to spike home plate as a means of getting through home plate as much as possible, and it’s kind of grown itself to an exclamation point of sorts. It shows their spirit a little bit, but that’s just part of their deal. Which is fine. I don’t care about that.” 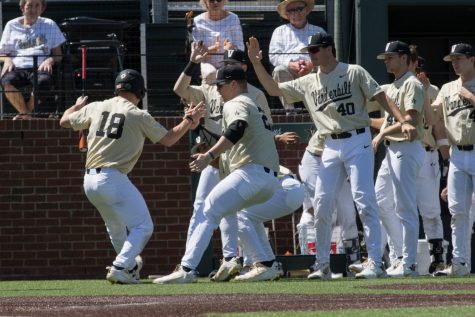 Corbin denied even having a hand in the matter. He claims that his staff teaches players nothing of the sort. Their only request is that players get through home plate with energy.

“I guess that energy has created a little bit of a stomp, but outside of that we’re just trying to get through home plate as much as possible. That’s what I do care about because that’s all that matters.”

Whether you’re apart of the team or you’re just a spectator, you may not know why it has become a necessity. But welcome to baseball. These things happen, and no one can explain why.

That same crowd, however, can certainly justify the trend because the 2019 Commodores have been knocking the seams off of the ball.

The 2019 Commodores have proven that this tradition, as meaningless and strange as it may be, works.

Commodores Stomping Their Way to Victory

Through the first 45 games of the 2019 season, the Vanderbilt Commodores have hit 65 home runs.

To put that into perspective, they’re hitting home runs at a rate of 1.44 per game. At this rate, they’re on pace to hit 14 more homers in their remaining ten games.

That would put them at 79. With 79 home runs, the Commodores would eclipse the school record of 69 home runs in a season, set back in the 2015 season.

And by the way, in 2015, the Commodores played a whopping 16 postseason games, as they lost in the championship of the College World Series to the University of Virginia.

Just last night, the Commodores put up a whopping 22 runs against the South Carolina Gamecocks. This should come as a surprise, but it didn’t.

That’s because they put up 21 runs a few days before against Tennessee Tech.

What is it that makes this team so different than previous Commodore teams, who have ended their season with just 67, 51, 43, 69, or 22 home runs–all tallies that include the postseason?

“Nothing has changed. Nothing at all,” said Corbin. “We’re just older, and because we’re older, we’re stronger. When kids get older, like JJ, like Stephen Scott, there’s more of a chance for them to get to the middle of the ball more, there’s more chance to get better counts. They learn timing and when they learn timing and they gain strength then the ball travels a little bit further. Outside of that, we’re not trying to hit them. That’s more about maturity, that’s more about approach, that’s more about getting a good count. If you center the ball and hit the ball hard, that will happen. The last thing we are thinking about is trying to get underneath the ball and hit it out of the park. I’d never let that fly. What we’re really trying to do is just touch the plate as many times as we can. If home run hitting is part of the equation, then we’ll do that. But outside of that, we’re not trying to do anything too crazy at the plate.”

Some things in baseball you can’t explain. This seems like one of them.

The Vanderbilt Hustler welcomes and encourages readers to engage with content and express opinions through the comment sections on our website and social media platforms. The Hustler reserves the right to remove comments that contain vulgarity, hate speech, personal attacks or that appear to be spam, commercial promotion or impersonation. The comment sections are moderated by our Editor-in-Chief, Rachael Perrotta, and our Social Media Director, Chloe Postlewaite. You can reach them at [email protected] and [email protected]
All The Vanderbilt Hustler picks Reader picks Sort: Newest
Subscribe
Login
2 Comments
Newest
Oldest Most Voted
Inline Feedbacks
View all comments
L
L. Burgess

I just saw the Vandy Stomp for the first time last week in the game against Duke. I love it! Made me laugh. Reminded me of the movie Major League when Serrano hit a home run and stomped on home plate.