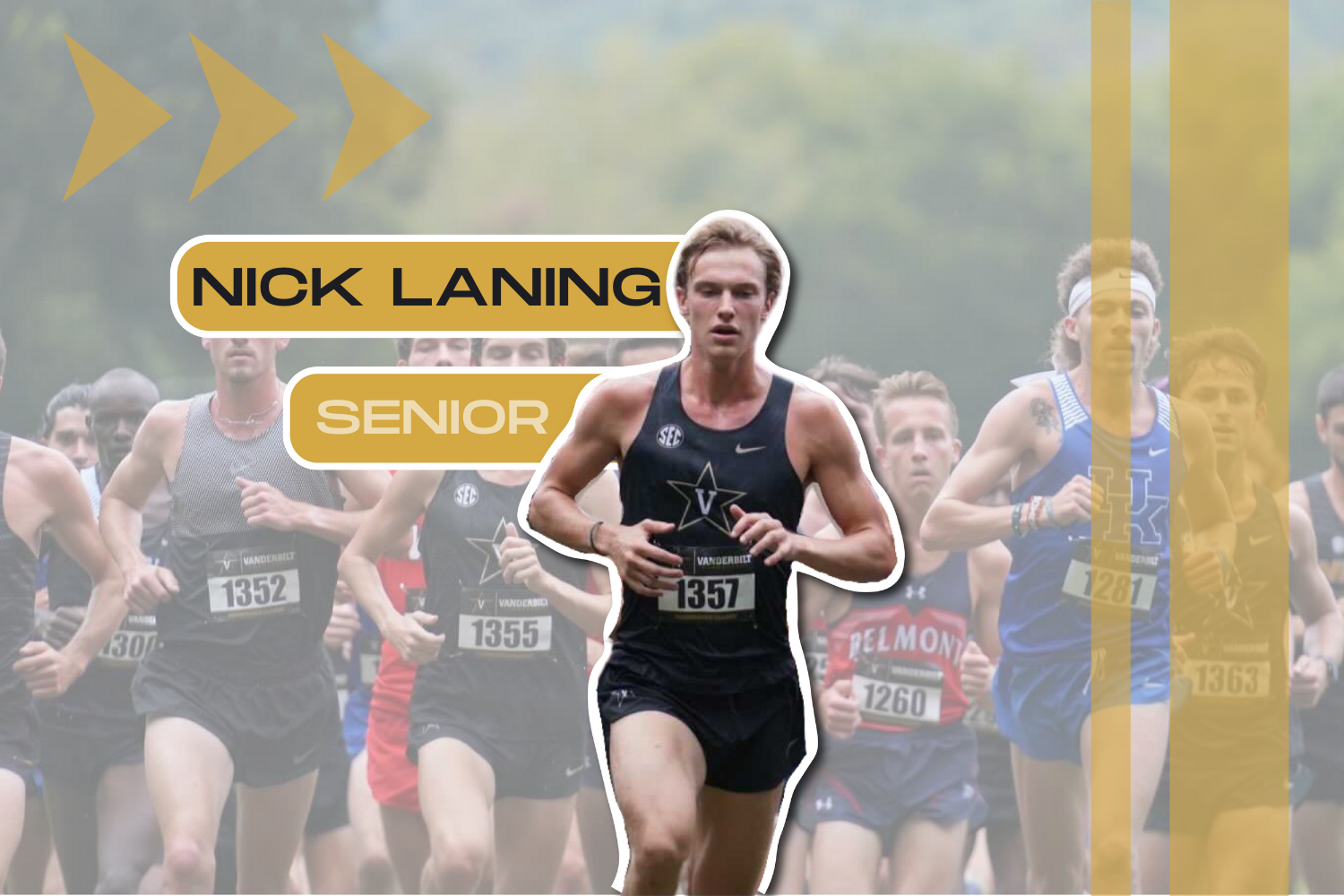 The two-time SEC Men’s Cross Country Scholar-Athlete of the Year is looking to complete his Vanderbilt legacy in a big way.

Nick Laning is generally a lighthearted person. He maintains a positive attitude and isn’t shy to poke fun at himself. But there is a principle from which the senior cross-country runner refuses to waver.

“Commitment,” Laning identified as his defining trait. “That is a huge thing that every guy on the team knows is a sticking point for me. I truly believe if you say you’re going to do something, you better do everything in your power to make it happen.”

While he is now a well-established runner, consistently leading the team alongside fellow senior Matthew Estopinal, it wasn’t always in the cards for Laning to run at Vanderbilt. In fact, for a while, his ability to compete at any college was in question.

Despite having some initial uncertainty, Laning couldn’t ignore his passion. His desire to continue running cross-country—a sport he began in eighth grade at his older brother’s recommendation—compelled him to pursue competition at the college level.

“The deeper in I got, the more excited I was about it,” Laning said. “How could I pass up the opportunity to get four more years of doing the sport I love?”

After flying mostly under the radar in high school, Laning immediately stepped into the spotlight at Vanderbilt. As a freshman, he led the Commodores in all but one meet and received SEC Freshman of the Week honors following his showing at the 2018 Commodore Classic.

His success carried over to his sophomore year, when he put together an extraordinary season as Vanderbilt’s top runner. Laning led the team at every meet, including the SEC Championships, where he ran a time of 23:21.8 to place 12th and earn Second Team All-SEC honors. He concluded his sophomore season by running 30:58.6 and finishing 20th at the NCAA South Regional, a 10-kilometer race.

The commitment to his team and the talent that Laning exhibits on the course are matched in the classroom. A civil engineering major, Laning believes that his choice of study has combined some of his lifelong interests and has opened doors for a future career path.

“I just love the outdoors, and from that, I’m really passionate about sustainability and environmental stewardship,” Laning said. “Engineering has always appealed to me, so civil engineering was kind of the way for me to connect those two different interests in my life.”

In addition to courses at Vanderbilt, Laning has found opportunities to explore his major throughout the greater Nashville area. His experiences include interning with subcontractors at a local construction site and working at an engineering consulting firm.

But perhaps his most memorable project was his first, in which he examined levees along the Mississippi River. Primarily using ArcGIS, a mapping and analytics software, Laning identified locations where levees could be partially broken to release water onto fields for agricultural use. Safely flooding these regions helped to limit flooding in infrastructure-dense cities.

“That was super cool to go in there, get all the maps and analyze these different areas with all the tools,” Laning said. “It was an awesome project and super, super fun, and a huge learning experience.”

Laning’s impressive record as a runner and student has earned him a major distinction in each of the past two seasons. In 2020, Laning became the first Vanderbilt student to be named SEC Men’s Cross Country Scholar-Athlete of the Year. On Oct. 27, 2021, he was announced as the winner of the award for the second year in a row, joining Kentucky’s Jacob Thompson (2016, 2017) as the only men to take home the honor multiple times.

Even as Laning receives these accolades, he remains humble and focused on the tasks in front of him. Though he acknowledges the significance of these honors, the senior prefers to put his head down and continue working rather than bask in his awards.

“I’m not a huge reward-focused or award-focused guy. I just kind of believe in going out there and grinding and then doing what needs to be done,” Laning said. “Even if you don’t get recognized, as long as you’re doing what you believe in, that’s good enough.”

Another testament to his humility is the credit he gives to his teammates. The fellow seniors on the team have become his best friends at Vanderbilt and as a result, have made his experience much more enjoyable. Additionally, Laning believes that the friendships formed between all of the Commodore runners have contributed to the team’s success.

“We’re all good friends with each other, but that also doesn’t stop us from pushing each other to be our absolute best,” Laning said. “If someone needs to be told, ‘Hey, you’ve got to step it up,’ that’s a conversation we can have.”

Assistant coach and distance specialist Michael Porter has picked up on the men’s team’s camaraderie in his first season at Vanderbilt. Since the roster is relatively small, with just 11 runners, he believes they have naturally formed close bonds.

The team became all the more important for Laning in his junior year. Cross-country presents a frustrating challenge, especially for the sport’s elite. As runners’ times get faster, they become progressively harder to lower. Because of this, cross-country runners often don’t see the same gross improvement year-to-year.

Laning encountered this conundrum last fall, when he maintained his sophomore performance rather than building on it. A disappointing season relative to his 2019 standards included a 27th-place showing at the SEC Championships.

However, Laning was able to take it in stride, thanks to his teammate’s emergence. Estopinal propelled himself to the top of Vanderbilt’s ranks alongside Laning in the 2020 season, headlined by finishing two meets as the first Commodore across the line. Since they started running at more similar paces, Laning has been able to benefit from having Estopinal as a reliable training partner.

“It has been awesome to have him up there with me,” Laning said of Estopinal. “I think it’s made us both a lot better, because we’ve been able to work together to push each other to be the very best we can be.”

The duo have fared well this season, with both earning top-10 finishes at the Commodore Classic and Blazer Classic. Vanderbilt will rely on Laning and Estopinal to work together to produce strong times on Friday and beyond, and their performances thus far indicate that they will be up to the task. Porter affirmed that Laning will be well-prepared for the big stage.

“He’s very confident in his abilities, very sure of himself,” Porter said.

Now well into his senior season, Laning recognizes the important role both cross-country and civil engineering have had in preparing him for the next stages of his life. Skills like time management and a strong work ethic have been instilled in him through countless hours running and studying. In addition, the ability to prioritize the task at hand and avoid procrastination has emerged from his time on the cross country team.

“Whatever is on your plate, being able to just focus on that, work hard and knock that out is, I think, a huge skill that I’ve learned from cross-country,” Laning said. “Whatever you’re doing at that moment, you’ve just got to focus on it and do it to the best of your abilities. And then after that, move on.”

Right now, that task involves delivering for the team at the SEC Championships and the NCAA South Regional, while hopefully attaining some personal goals along the way. Laning is looking to finish within the top-10 at SECs and qualify for the NCAA Championship at the Regional meet.

The team’s success always comes first for Laning, however, and he believes that these two postseason races offer the chance for Vanderbilt to finish the season on a high note. Laning acknowledged that the team has struggled to have each of its runners have their best race on the same day. But entering their final races, he is confident that the Commodores’ bonds will help them get in sync and ensure they perform to the best of their abilities.

“That tight-knit community we have really makes a world of a difference, because at the end of the day those are the guys you’re running for,” Laning said. “It’s nothing else except for you guys going out there and doing it for each other and trying to make something more than just your individual race.”