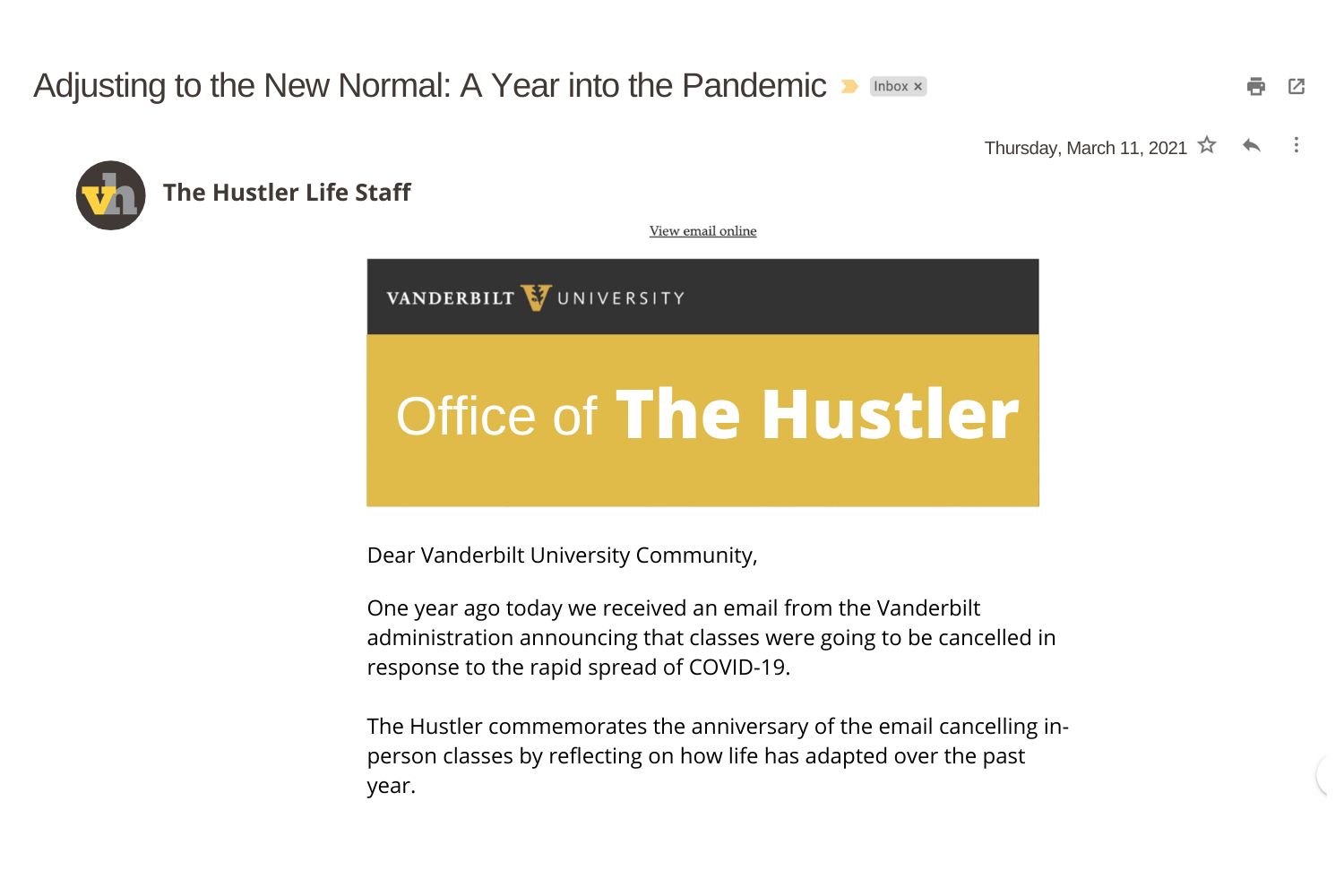 March 11, 2020 marked the date of the university-wide email cancelling in-person classes for the remainder of the Spring semester. The Hustler regrouped with some Commodores willing to retell their experience academically and personally since.

One year ago today, the pandemic finally hit home. The Vanderbilt administration sent an email to students March 11, 2020, announcing that classes would be moved online for the remainder of the semester after previously only postponing them for the week.

The collective gasp that echoed around campus contained a thousand and one different emotions. For some students, the news meant “spring break part two” and celebrating St. Fratty’s Day a week early. For students studying abroad, it foreshadowed the impending cancellation of their programs and added the stress of finding a flight home before airport closures. But for everyone, it brought overwhelming uncertainty. Not even TikTok psychics, who predicted the pandemic would be over by June, truly knew what might happen next.

Now, a year later, no St. Patrick’s celebration can undo the 365-day descent from High School Musical-level “school’s out” euphoria to the existential struggle of living through the COVID-19 pandemic. We’re commemorating the first anniversary of that fateful March email by looking at how much our fellow Commodores have changed both academically and as individuals. Read on to hear the key questions we asked students as they opened their Snapchat memories and relieved just how we all felt one year ago today.

“I think we all had no idea that this pandemic would persist for as long as it has. Even though I was cautiously hopeful to see my friends again in May, I made sure to spend my last days at Vanderbilt as much as possible with my friends.” — Carter Powers (BA ‘20)

“Honestly, I couldn’t tell if the email was a malicious joke or not. I remember being with one of my friends, and we both couldn’t believe it. I think the initial reaction was shock, but I was actually super upset that it came out of nowhere. At that point, I realized how serious everything was, and I was really sad that I wouldn’t be able to say a proper goodbye to my friends. I was angry mostly because I had to figure out booking a flight and somehow pack my whole room into a few boxes. It was a really chaotic week, and once I went home I was still dumbfounded by the whole situation.” — junior Christina Lee

“I had just come back from ASB [Alternative Spring Break], and after my experiences with it, I felt rejuvenated and I was looking forward to starting the rest of my semester with a whole new outlook on life. When I got back, it hit me almost instantly how upset I was at the situation and how all hopes for experiences I wanted from the semester were essentially going to be over. I started questioning all my first semester experiences and wishing I had done things differently. I thought I had more time.” —sophomore Ameera Ilyas

“I thought I had more time.” —sophomore Ameera Ilyas

How did your summer plans, or other future plans, change?

“The first week of May, just as I was about to submit my Visa application [to work abroad], I received an email stating the university [in which I was employed] had closed down and that I could no longer come. I hope to get my Ph.D. in the future and plan to do research full time. While I lost that summer, because I work in a lab in the biological sciences department as opposed to the medical center, I actually have been able to work in my lab which I am so grateful for. However, I have to work about twice as hard to get my work to the publishing stage to make up for the time that I lost.” — junior Olivia Pembridge

“I was supposed to conduct research at a Vanderbilt virology lab, shadow physicians and potentially train and practice as a medical scribe. All of those plans were scrapped, and I ended up staying at home in California the entire summer. I changed plans and used the time to prepare for the MCAT and ended up taking it a week before I returned to Vanderbilt. Long-term, though, my plans aren’t too different. I am still applying to medical school this upcoming cycle and looking for gap year opportunities.“ — senior Anish Raman

“I had already planned to take that summer off to hang out with friends, so I didn’t have an internship planned that got cancelled or anything like that. However, I couldn’t hang out with my friends like I had hoped. I got to know some of my neighbors really well, so at least I got that out of the whole experience.” —first-year Nisala Kalupahana

How did you feel about coming back to school?

“I was mildly uncertain how we would handle returning to school this past fall— whether our student body would last only two weeks before a mega-outbreak, whether we would last through November as planned, or somewhere in the middle. When classes began, I realized most people were wearing masks and social distancing responsibly, so I was more confident we’d last.”  — Nolan Siegel

“I was all for coming back to school, because I thought it would be the best way for me to feel like I still have a college experience. Despite that, it has mainly just been a lot of busy work and some hangouts since being back. I feel like I had a compromised Vanderbilt experience, and that I was not getting my money’s worth.” — Anish Raman

“I was most excited about moving into campus and getting out of the house I was in for the majority of the summer. Getting back into the swing of being a student and balancing schoolwork and time for myself was difficult, since we were essentially out of school for six months before moving in, but it was a much needed change of pace.” — first-year Valerie Tung

What do you miss the most?

“Closure, definitely. When I left, it was entirely unclear how everything would progress and what it could mean for graduation and celebrations. I really did not expect final farewells to be postponed for a year. My worst case scenario was that it may be delayed a few weeks until the pandemic was controlled. As the weeks went by, it became more and more clear that it was time to cancel reservations and give up hope that I would have the chance to say goodbye to Vanderbilt and my friends as I had hoped in May. If I had known then that this pandemic would be raging on a year later, I know I would have been more intentional about saying my goodbyes and taking a few extra moments to appreciate Vanderbilt as a whole.” — Carter Powers

“I miss being able to see people smile.” — Nolan Siegel

“Growing up I was told that I was born for college. I mentally aged out of high school very early,   andmy whole life I’ve looked forward to going to a university. Those people were right, I loved college. I loved living on campus. I loved meeting new people. I loved nights where I ended up in unexpected situations. I loved my classes. I loved it all. I really do feel like that was taken from me. People always tell you to live in the moment instead of just looking forward to something and I learned that the hard way, having looked forward to this and then not actually getting the full experience of it. But it is a good learning experience. The future is so unpredictable, so you really have to focus on what’s going on around you in the moment.” — Olivia Pembridge

Has the pandemic changed how you live your life?

“I think I’m starting to realize what I truly like and what my values truly are, because I was able to finally have that one-on-one time with myself that I most likely wouldn’t have had otherwise. I have learned how to focus my energy on not comparing myself or worrying about how I’m perceived and just trying to grow into the best person I can be.” —Ameera Ilyas

“The pandemic has definitely made me more health-conscious, and it’s also made me realize just how many of my normal interactions I take for granted. Honestly, if I get a cold after all of this is over, I’ll probably still wear a mask.” — Nisala Kalupahana

If everyone were vaccinated today, what’s the first thing you would do tomorrow?

“I would probably go clubbing. I turned 21 during the pandemic and never really got the chance to. Now that my friends and I are mostly of age, I think that’d be a lot of fun. A close second would probably be throwing a party at my suite.” —Anish Raman

“The absolute first thing I would do is travel, honestly anywhere. Travelling and exploring new places with my family is something that I always look forward to, and it’s probably the thing I’ve missed the most since the pandemic started.” —Valerie Tung

“Throw a party, duh. I think I would have less anxiety about meeting friends, too. I’d probably also go to coffee shops and work and just chill and suck in that ambience, you feel me?” —Christina Lee