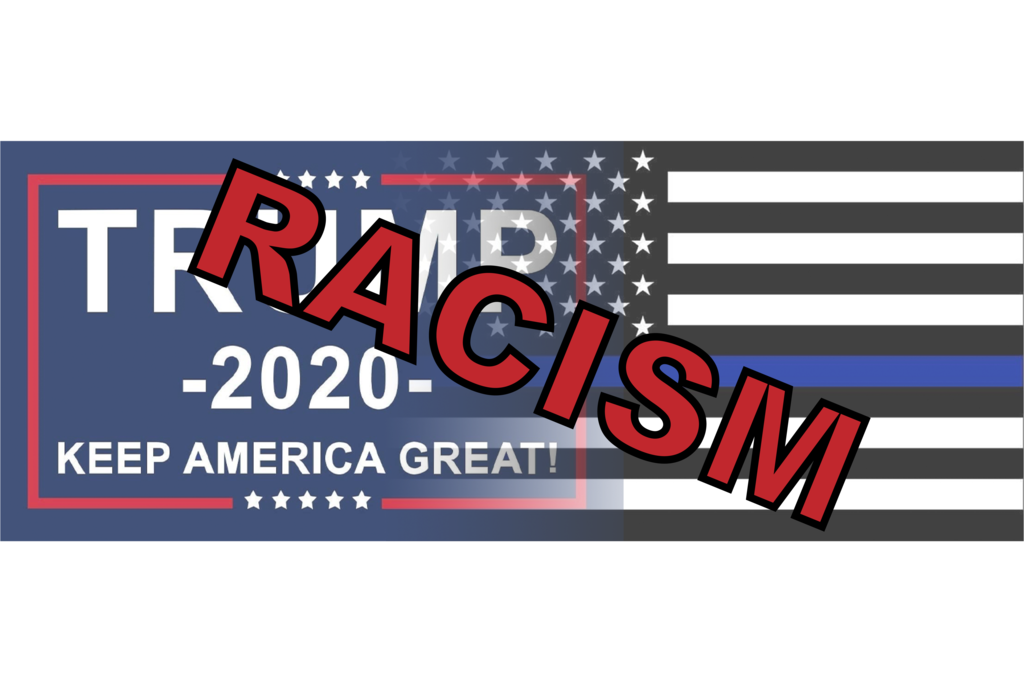 “We, as a community, must address our shortcomings and actively push for a more progressive and equal society. That progress begins when we’re all honest about the racist meanings behind normalized items like Make American Great Again and Blues Lives Matter merchandise.” (Hustler Staff/Emery Little) (Emery Little)

“We, as a community, must address our shortcomings and actively push for a more progressive and equal society. That progress begins when we’re all honest about the racist meanings behind normalized items like Make American Great Again and Blues Lives Matter merchandise.” (Hustler Staff/Emery Little)

Though they do not specifically spew hateful words, the slogans Blue Lives Matter and Make America Great Again are inherently racist because they condone an America where minorities are systematically oppressed.

As I was crossing West End last week, there was a truck waiting at the light with two prominent Trump flags flying proudly from the back of the truck. Since I moved on to campus, I have seen many people proudly display their Trump merchandise. Similarly, one night I was walking on campus and noticed a VUPD officer with a Blue Lives Matter mask on his face. In both situations, my body immediately tightened and I cringed, but I didn’t feel hatred; I felt hated.

Before I dive into this article, I again would like to state that my opinions do not speak for the entire Black community on campus. My opinions are formulated based on my own experiences and my knowledge of the experiences of a large number of black students on campus.

Blue Lives Matter is a derogatory phrase used to invalidate Black Lives Matter. Blue Lives Matter isn’t an organization; it has no goal and it is not calling for any kind of action. The slogan is simply used as rhetoric to suppress the voices of the black community when we protest against police brutality. Lives are not blue. You can not equate a “blue life” to my black life.

Additionally, a  job in law enforcement is a serious profession that one would think requires an abundance of training, but that is not the case. In the United States, police officers need on average a mere 647 hours to complete the required training. A cosmetologist needs 3,000 hours. This weak training results in many shortcomings such as a lack of de-escalation skills and a lack of implicit bias training.

Why am I, a civilian, forced to learn how to de-escalate a situation because of a trigger-happy officer? I did not sign up for this. The color of my skin shouldn’t immediately mean that I am subjected to state-sanctioned violence. Police officers have shot black people for eating ice cream in their house, going for a jog, being mentally ill, sleeping in their homes, and more. Instead of immediate firings and filing of chargers, the black community is given blanket“investigations” paired with paid leave. More often than not, these officers face minimal repercussions considering the fact they committed murder. We, the black community, will never forget the true history of our current police force, specifically the fact that it stems from slave patrols and night watches during slavery.

Furthermore, MAGA is just as ignorant as claiming “Blue Lives Matter.” Make America Great Again” is Trump’s tagline that calls for America to return to its previous glory. I, along with many other black people, find myself wondering when America was at its prime—during the era of segregation or the era of slavery? He stresses the need for law and order when black people are fighting for their lives, but in the same breath, he will tell white supremacist groups to “stand by and stand back.”

If you support President Trump, you are condoning his actions, specifically his racist actions. Though he may claim that he is the least racist person in a room to a woman of color, actions speak louder than words. And in this case, his actions have not only been loud but explicitly racist.

Throughout his life, Trump has been involved in multiple racist scandals. Notably, Trump refused to rent to black tenants, called for the death of the wrongfully convicted Central Park 5 and assumed that Obama was not a U.S. citizen and was unqualified to be a Columbia and Harvard graduate simply because Obama is black. These are horrific actions, and the list goes on.

It is not enough to say “I am not racist.” You have to actively work against racism in our society every day. Therefore, by claiming  “Blue Lives Matter” and “Make America Great Again” you are inherently racist because you support racist ideologies and people.

Now, I am not arguing that people need to go out and rid the world of all racism because that is obviously unrealistic. However, simple initiatives such as not owning and wearing MAGA merch and claiming Blue Lives Matter while also acknowledging your own bias and educating yourselves and others about the issues in America can go a long way.

We, as a community, must address our shortcomings and actively push for a more progressive and equal society. That progress begins when we’re all honest about the racist meanings behind normalized items like Make American Great Again and Blues Lives Matter merchandise. These items are a part of the problem, and I encourage everyone to recognize the blatantly racist undertones someone gives off when they choose to identify with these groups.

The Vanderbilt Hustler welcomes and encourages readers to engage with content and express opinions through the comments section on our website and social media platforms. However, The Hustler reserves the right to remove comments that violate the outlined policy. Comments which contain vulgarity, hate speech, personal attacks or appear to be spam or commercial promotion will be blocked or removed by The Hustler. The comments section, both on the website and social media, is moderated by the Editor in Chief.
All The Vanderbilt Hustler Picks Reader Picks Sort: Newest
Subscribe
Login
10 Comments
Newest
Oldest Most Voted
Inline Feedbacks
View all comments
Q
Qanon4Trump

Has my alma mater reduced itself to being an adolescent playground where people get exercise only in self-pity and narcissism?

Did my alma mater really grant a degree to an obvious bigot that refuses to acknowledge the validity of another’s experience and the merit of her arguments?

As a white guy, people like this have certainly made me stop saying “I’m not a racist.”

So, mission accomplished. Just not in the way the author probably intended.

You have not provided any evidence for your claims in this article and to assume every person who supports Trump and the police is racist is ridiculous, closed minded, and prejudice in itself.

Declaring half of your countrymen and women racist just because they support a better world is not fair, not supported by any evidence, not productive and not true. You should thank the many of us that work in your best interest and that of humanity and save the judgments for those that deserve it, including the anarchists, looters, rioters and criminals. Bless you for trying, but calling me a racist only makes me reach for a mirror for my rebuttal.

if you support a racist… you are racist. you can’t look over his denial of basic human rights just because of tax breaks. (By the way your use of “thank the many of us” reeks of a savior complex).

Have you looked at Biden’s record and Kamala’s record? Far more evidence of racist politics from them than Trump. So, I guess that makes the op-ed author a racist.

According to the FBI, counties where there have been trump rallies are seeing peaks of hate crimes in June or July when they usually do not peak until December