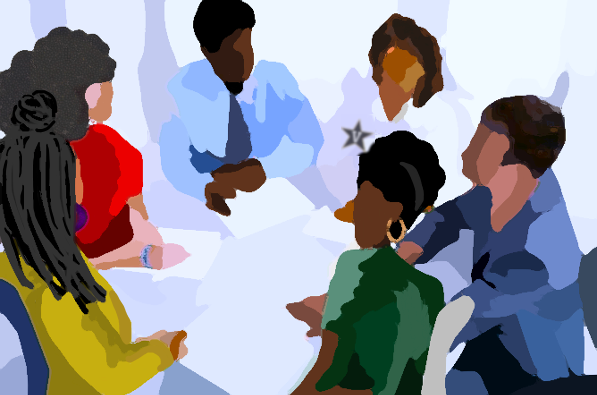 On Friday Oct. 16, the Hustler hosted a virtual roundtable event with Black undergraduate organizations at Vanderbilt.

ROUNDTABLE: Where is the justice in “diversity and inclusion?”

Editor’s Note: The organizations represented in this discussion are the organizations that accepted invitations to the roundtable. The quotes utilized in this article are a part of a longer recorded conversation and have been edited for clarity and brevity. This piece also contains references to racism and sexual assault.

“Virtually every institution seized upon that term, ‘diversity.’ And I always ask, ‘Well, where is justice here?’” This quote was said by Dr. Angela Davis in conversation with filmmaker Ava Durvernay earlier this summer. Over the summer, Vanderbilt released their new inclusion initiative, an initiative they have since made progress on. Except, in between the buzzwordiness of diversity and inclusion, it must be asked: “is there truly justice here?”

This was the jumping-off point in a roundtable discussion hosted by The Hustler with representatives from Black student organizations on our campus: President and Vice President of Vanderbilt NAACP Virginia Richards and Lauren Winston, Co-President of REVAMP and REVAMP member Bryson Rorie and Eric Mitchell, NPHC members Destinee Marsh and Chip Dail and Vanderbilt New Dawn editor Isabel Okinedo. It was also moderated by members of The Hustler’s editorial board, Miquéla Thornton, Nora Smith and Will Langford.

The key components of Vanderbilt’s initiative include expanding dialogue with Black community members, increasing investment in programming and infrastructure intended to benefit Black students, further diversifying the Vanderbilt community, expanding the curriculum on racial topics, confronting racism in Vanderbilt’s past and partnering with Nashville to address racial inequalities in a myriad of ways.

The merit of Vanderbilt’s inclusivity initiative

A main criticism of the inclusivity initiative was the lack of tangible goals, as well as the “epidemic in academia” of proclaiming initiatives without putting both social and financial capital behind them, as touched upon by junior Virginia Richards.

“The real work,” she said, “comes into holding university members, whether it’s faculty, administration and other students accountable for their racism, particularly their antiblack racism on a systemic level. Until those institutional reconstructions happen in Vanderbilt, where they address that a lot of the school’s founding is on white supremacy and classism as it connects to white supremacy, then real tangible efforts and accountability won’t actually be able to be facilitated.”

One apparent “tangible goal” seemingly missing from the initiative was the renaming of Calhoun Hall, as pointed out by junior Bryson Rorie. In light of the student advocacy that has taken place regarding the hall’s name, Rorie said, “I’m not entirely sure that the things that we’ll see are necessarily things that we want,” referring to the headway made by the university in its initiative.

In terms of what Vanderbilt has done thus far, sophomore Lauren Winston pointed out that the administration hasn’t been communicating with students to see if their accomplishments, many of which affect the Nashville community, are making a positive difference in the lives of students on campus.

As junior Destinee Marsh put it, “They are making an effort to amplify Black voices but not listening to them.”

The next part of our conversation was sexual assault and its relation to misogynoir on campus. As argued in a June Hustler guest editorial by alumna Erin E. Hardnett, “Vanderbilt has an insidious culture of supporting rapists over survivors,” and misogynoir (sexism specifically enacted on Black women and nonbinary femmes) plays a huge role in how society, students and the Vanderbilt administration respond. Hardnett, who is a sexual assault survivor, explained that her lack of proximity to whiteness is why her and other Black women and femmes received less attention on campus and on social media when multiple accounts of sexual assault at Vanderbilt went viral on Twitter.

Okiendo went on to comment that “these talks on sexual assault aren’t really doing much if nobody’s listening” and that a “zero-tolerance policy” for rape and sexual assault “is not asking a lot of administration.”

A zero-tolerance policy is only one step; another, as Rorie said, is that when we have these conversations, it’s not enough to say “how it’s a big problem”—both the “lack of accountability and lack of protection” on Vanderbilt’s campus needs to be acknowledged.

Senior Chip Dail stressed the importance of supporting survivors, a concept covered in an event his chapter held with Project Safe. Support should not only come from other students but also from Vanderbilt, “an institution that claims to love them.”

“It’s supposed to be a home away from home,” Dail said, “and it just doesn’t feel like that.”

VUPD and policing on campus

This topic of safety led us to the discussion on VUPD and policing on campus. In reference to a virtual town hall held with the Black Cultural Center (BCC) earlier this semester, Virginia described it as “damage control” and a “PR move.” “It wasn’t focused on prioritizing the needs of Black students, especially considering the culture of policing that we live in today,” she said.

As said by Rorie, there was an extreme lack of accountability at the town hall, and even when asked about instances when they have made mistakes in the past and how VUPD owned up to it, “they had no answer.”

Richards later referenced the controversy over VUPD officers wearing “all lives matter” masks, and said that it “really goes to show the sort of environment that Black students have to live in on campus.” She went on to state, “There is no reason why our student population has to be navigating campus on edge when these are supposed to be the officials that are sanctioning campus security. There is no reason why we should be seen as threats navigating a campus that’s supposed to keep us safe.”

As touched on by our roundtable participants, the feeling of not being safe around police remains persistent even on Vandy’s campus. “Some people look to VUPD for safety, but that’s just not the case for Black students,” explained Marsh before accounting her own discomfort with VUPD.

Because of this, it would seem obvious that VUPD would be prevalent in Vanderbilt’s inclusivity initiative, yet they were notably absent. As elaborated on by Richards, “It institutes or at least suggests that VUPD saw this initiative and didn’t feel like it was even their place to be a part of these reforms in the school… The fact that they aren’t making an active, intentional and loud attempt to be part of these initiative plans goes to show that it’s a lot of image-creating. It’s a lot of disingenuousness and it’s a lot of not feeling as though they have a central place in contributing to the multiple racist factors that Black male students have to undergo.”

The burden of recognizing holes like this one in administrative plans often falls on students, Winston said, and the issue of policing on campus is an example of that.

Lastly, we discussed Greek life, specifically the movement to abolish it that erupted over the summer. While the movement already existed prior to a video of an Interfraternity Council (IFC) fraternity member saying the n-word at a party, this instance fueled the fire further.

When asked if the administration’s response to this incident was substantial, Okinedo answered “absolutely not,” and expressed that because we live in the South with a prevalent culture of Greek life, “we’re left with the choice of abolition or living with it. And I think it’s more comfortable for Vanderbilt to just live with it.”

Additionally, Virginia Richards touched on the NAACP’s stance about why reform isn’t enough, and later concluded that “if Vanderbilt wants to be on the right side of history, they will prioritize the marginalized voices on campus. But they have chosen a track that has shown decade and decade over again to not work.”

The Hustler encourages all readers to watch the Roundtable. This article is a brief version of the above virtual roundtable, which is an even briefer version of a much larger dialogue that needs to happen on campus, not only in words, but in actions on the part of students, organizations and most importantly, Vanderbilt’s administration.